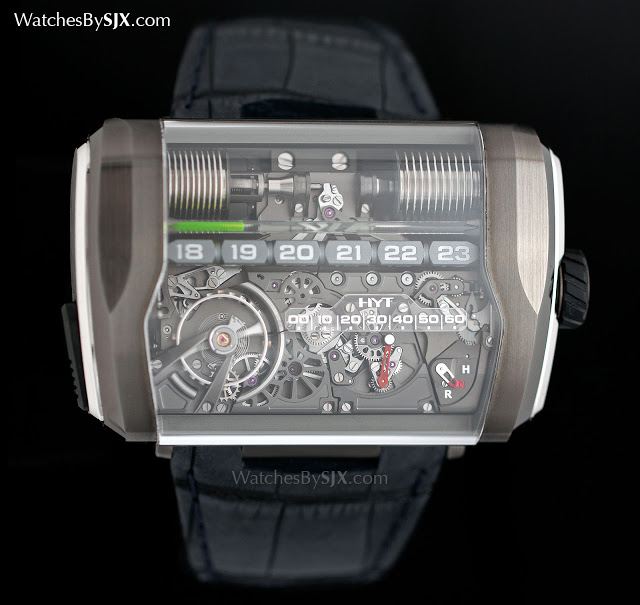 The third and most complicated timepiece from HYT to date, the H3 tells the time linearly. Both the hours and minutes are indicated on a straight line, just about the only simple aspect of the display.

A thin glass tube filled with two liquids – technology pioneered by HYT in its H1 – points to the time with the meniscus of the two immiscible fluids, a bright green water mix and the other a clear oil. The liquid travels from left to right, driven by a pair of bellows at the top of the movement. The glass tube just above beside a horizontal column of cubes with the hours, that rotates four times a day, in essence a highly elaborate jump hour mechanism. Each face of the column, made up of six cubes, showing six hour numerals at a time, for instance 1800 to 2300 hours as shown above. The next set of hour numerals will then be 2400 to 0500 hours. At the end of the hour track the hour column jumps, and the liquid quickly retreats to the starting point. A temperature compensator has been built into the mechanism that drives the fluids, positioned in between the two bellows. This accounts for any expansion or contraction in the volume of the liquid, ensuring the time display is correct regardless of ambient temperatures.

Minutes are indicated by a red retrograde hand travelling in the same direction as the liquid. The minutes are printed on a clear sapphire disc, with the white tip of the red minutes hand pointing the time. Notably the minute hand travels on two axes, one at the end of the red hands and another for the base carrying the hand. This is a consequence of the narrow space for the minute display, it allows the minute hand to travel a long distance horizontal, while minimising the vertical distance travelled. Mostly skeletonised to reveal the numerous gears that drive the complex displays the movement was conceived by Renaud & Papi (APR&P). A subsidiary of Audemars Piguet that specialises in ultra-complicated movements best known for the movements it makes for Richard Mille, APR&P also designed the H2. As is its habit with the movements it creates, APR&P included many signature features in the H3. One is the titanium balance wheel with gold screws, and another is the crown function indicator at five o’clock on the dial labeled “H-N-R” that shows the wearer what position the crown is at. The letters refer to time setting (“H” for heures), neutral (“N” for neutral) and winding (“R” for remonter). The case is a large oblong measuring 62mm in diameter and 41mm vertically, made mostly of titanium coated a dark grey, with platinum inserts on each end of the case. The sapphire case back reveals the twin barrels of the movement, which together give it a 170 hour, or seven day, power reserve, indicated on a scale at 12 o’clock.