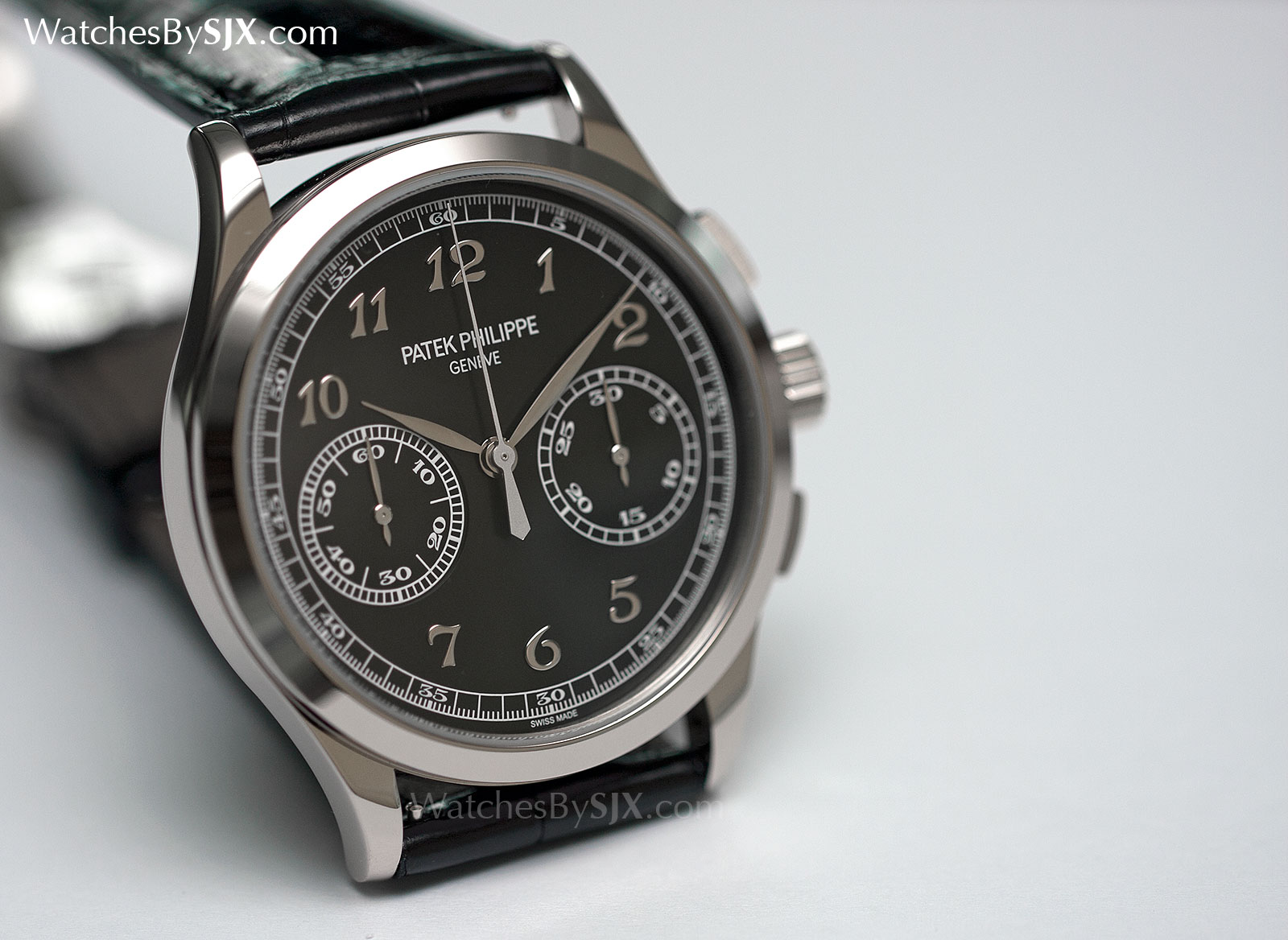 Introduced at Baselworld 2015, the Ref. 5170G-010 is the latest iteration of Patek Philippe’s hand-wind chronograph, featuring a black dial with Breguet numerals, and the best looking yet. Neither novel nor creative, the combination of Breguet numerals and feuille (leaf-shaped) hands nevertheless works well. Extremely well in fact, making the Patek Philippe Ref. 5170G-010 that only just made its debut at Baselworld its most attractive looking chronograph to date.  The dial is a “black opaline”, which means it’s a deep black, semi-glossy finish. All the numerals are made of white gold and applied to the dial, meaning they are secured with pins underneath. All the printed markings and text are stark white, giving the deal a clean, monochromatic appeal. Dial details Two important features give the dial of the new 5170G a look totally distinct from the earlier Ref. 5170G-001 (which continues in production alongside this one). One is the removal of the pulsometer, leaving the dial less cluttered since the outer minute track is now larger. And that means neither chronograph register intersects with the minute track as they did on the earlier model. The second feature are the leaf hands, instead of sword-shaped hands. Leaf hands lend a vintage feel, unsurprisingly since they are probably the most common style of hands in historical Patek Philippe chronographs. The powers that be at Patek Philippe clearly believe this dial style works – the brand also unveiled alongside the new Ref. 5170 at Baselworld was the Ref. 5370P rattrapante chronograph with the same design features. If there is one criticism of this look is that the look is conservative, something that is enhanced by the sharp contrast of black and white. This aesthetic is safe, and easy to like.

Dial aside the Ref. 5170-010 is exactly the same as the other chronographs of this reference. The white gold case is the same, with a diameter of 39.4 mm. What’s inside The calibre CH 29-535 PS found inside is also identical, with the jumping seconds counter and patented tooth profiles that are unique to this calibre. Visually the movement is appealing, with just the right combination of artisanal and mechanical finishing to make it attractive yet viable. (For a detailed explanation of the technical details of the movement, look at the article on the Ref. 5271P chronograph with perpetual calendar.) Lighter on the wallet One major difference between this and the earlier models is the price. At SFr71,500 or S$104,000, the Ref. 5170G-010 costs significantly less than the earlier models did at their respective launch dates, as a consequence of Patek Philippe’s recent price reductions in some markets to ensure price parity globally – something I predicted last year. At that price the Ref. 5170 now costs essentially the same as the equivalence from Vacheron Constantin and Lange (specifically the Harmony chronograph and Datograph in gold respectively). The effect is that Patek Philippe’s traditional price premium relative to its competitors has been erased, something that applies to most of its offerings. That should, in theory, make this a compelling buy.

Introduced for the first time in rose gold at Baselworld 2015, the Patek Philippe Ref. 5270R is another addition to the firm's lineage of perpetual calendar-chronographs.