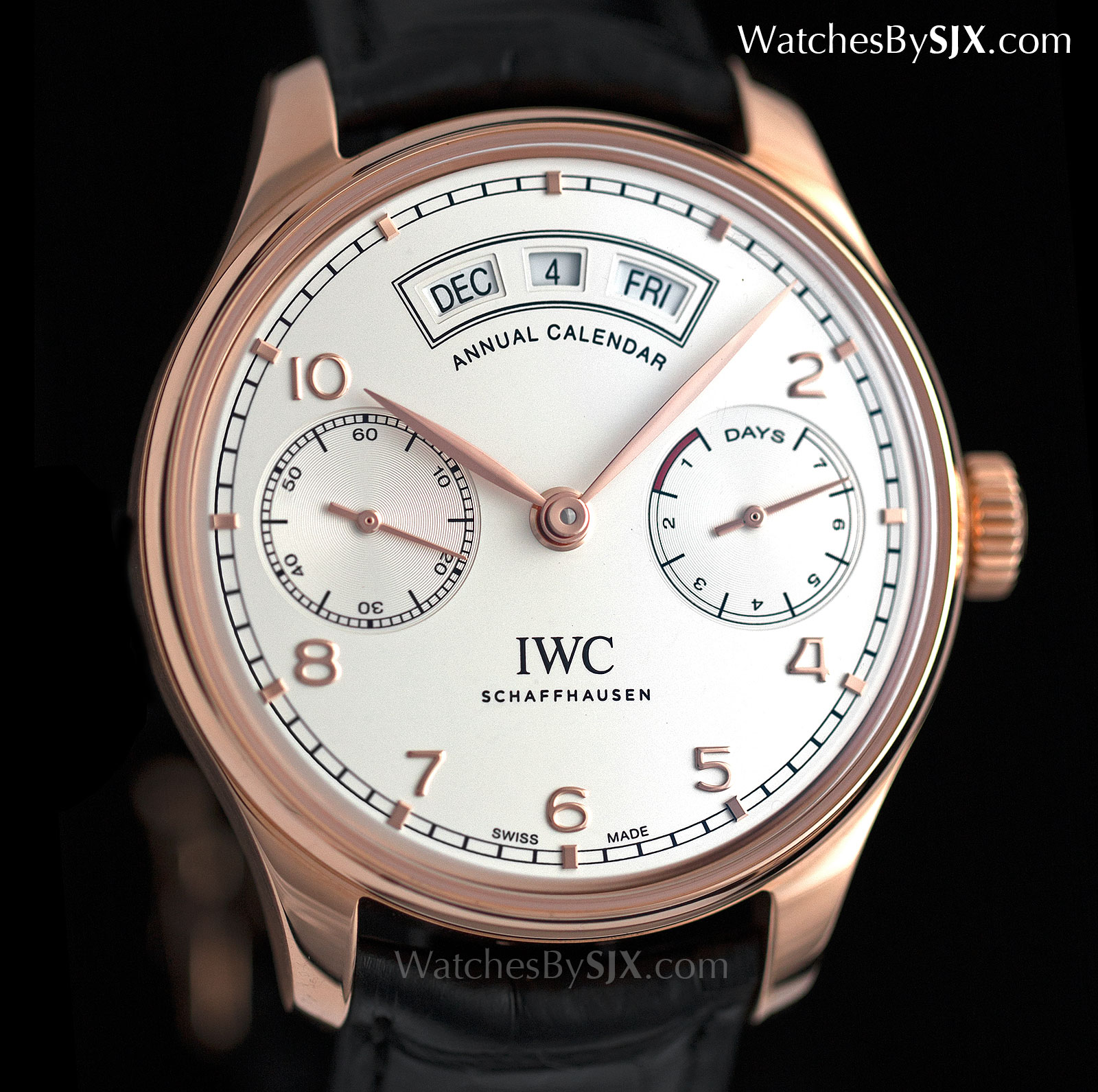 IWC introduced its first ever annual calendar at SIHH 2015 with the Portugieser Annual Calendar, that is also equipped with the new calibre 52000 movement. Amongst the slew of new Portugieser watches unveiled at SIHH 2015, the Portugieser Annual Calendar is the most novel. The complication is a first for IWC, and it’s built on the newly developed calibre 52000 seven-day automatic. Slightly reminiscent of a vintage Portugieser but thoroughly modern in construction, the Annual Calendar encapsulates the clever blending of high horology and high tech. While a perpetual calendar requires setting every century because years exactly divisible by 100 are not leap years (and Franck Muller offers a 1000 year perpetual), an annual calendar needs to be adjusted every four years. Once a year it needs to be set in February as that month has only 28 or 29 days instead of the usual 30 or 31.  Patek Philippe was the first watch brand to introduce an annual calendar wristwatch in modern times some 20 years ago (the 5960/1A is an example of its typical annual calendar layout), but the complication has become more common since then. And now IWC has added it to its line-up for the first time. All the calendar functions are set via the crown, leaving the case free of pushers. With the month, date and day displayed side by side in good sized windows, the calendar display is legible, intuitive and clean, save for the “annual calendar” printed beneath the windows. Despite the tremendous progress in watchmaking many watch designers remain unexplainably addicted to including superfluous text on the dial. The rest of the dial is vintage Portgieser, with a railway minute track, Arabic numerals and leaf hands. Seconds is at nine o’clock while the power reserve is opposite. The layout of the dial is not just concise but pleasingly symmetrical. The Portugieser Annual Calendar is one of the first watches to feature a movement from the new 52000 family of movements (the specific movement in the annual calendar is the calibre 52850)  This is a series of automatic movement with a seven day power reserve that replaces the calibre 5000, IWC’s most accomplished movement of this century.  Functionally the calibre 52000 is identical to the movement it replaces. The 52000 has bidirectional automatic winding with a Pellaton mechanism, a seven day power reserve and a free-sprung balance wheel. In its details, however, the calibre 52000 is an obviously modern movement. Visually the more elaborate decoration is obvious, particularly with more prominent bevelling of the bridges. The movement has been designed and finished to look appealing, though the finishing is primarily done mechanically. The sharp definition of the Geneva stripes and graining of the barrel ratchets mean they are done mechanically, just like the bevelling of the bridges. Modernity is also obvious in the winding mechanism, with the most important bits, the winding wheel and pawls, made of black ceramic. The material is hard and nearly friction free, meaning these components essentially last forever. A more subtle detail is the smaller balance wheel as compared with the earlier calibre 5000. Historically large balance wheels were valued for their high inertia and stable timekeeping, but are now unnecessary in modern movements since modern mainsprings alloys can deliver more torque. Smaller balance wheels also allow for a longer power reserve, without having to make sacrifices elsewhere, and are also more shock resistant. Technology also allows for a domed sapphire crystal with a box-shaped profile that resembles the Plexiglas crystals of vintage watches. Sapphire crystals in this shape were once expensive to produce, but are now more common, especially because the material is being used widely in unusual shapes which gives sapphire makers economies of scale.