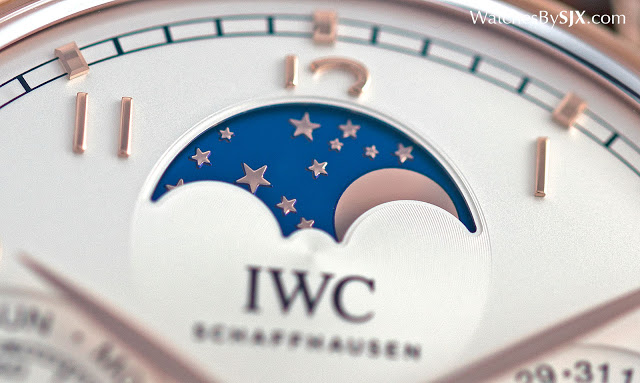 Not the most complicated or expensive, the perpetual calendar is nonetheless the flagship of IWC‘s Portugieser collection because it utilises the famous perpetual calendar invented by Kurt Klaus. Concise and clever, the perpetual calendar mechanism is set entirely via the crown, needing neither buttons nor pushers. And it has a four digit year display, useless in practice but a concrete reassurance of the longevity of this expensive mechanical watch. Unlike past generations of Portugieser Perpetual Calendar which were confusing because of the varying sizes and styles available, the new perpetual calendar line-up is easy to digest. There are four models available, all with the same 44.2mm case available in red or white gold. And the dial designs have also been unified, with all of the models featuring a railway minute track. The only options are dial colours and the moon phase – either the traditional single moon display or the two-hemisphere, double moon phase. Regardless of the type of moon phase, a liberal sprinkling of stars has been added to the moon display. It’s a subtle detail but makes the dial a little bit less staid.

While the offerings have been streamlined, the key feature of the watch remains the same – the clever perpetual calendar mechanism that’s now 30 years old. When it first came to market in 1985, the IWC Da Vinci was the first perpetual calendar wristwatch with a four digit year display.

Like most of the revamped Portugieser watches unveiled at SIHH 2015, the perpetual calendar relies on the newly developed calibre 52000 movement. The calibre 52000 is functionally identical to the calibre 5000 it replaces, but is a more efficient construction. It has two mainsprings instead of one, which deliver more even power throughout its seven day power reserve. And it has wear-resistant ceramic components in the Pellaton winding mechanism. A more detailed explanation of the movement can be found in our story on the Portugieser Automatic 7-Days.

But because all four versions of the Portugieser Perpetual Calendar have gold cases, the movements used are a little bit more decorated. Instead of a rhodium plated brass, the rotor is made of 18k red gold. And the most screws in the movement are heat blued, rather than just polished steel.

Though the case of the new perpetual calendar retains the classic form of the Portugieser, the sapphire crystal is now domed, an upgrade over the flat crystal of the earlier generation. More expensive to produce than its flat counterpart, the domed crystal also approximates the look of a vintage Portugieser watch with its domed Plexiglas crystal. This domed crystal is also found on the Portugieser Annual Calendar.