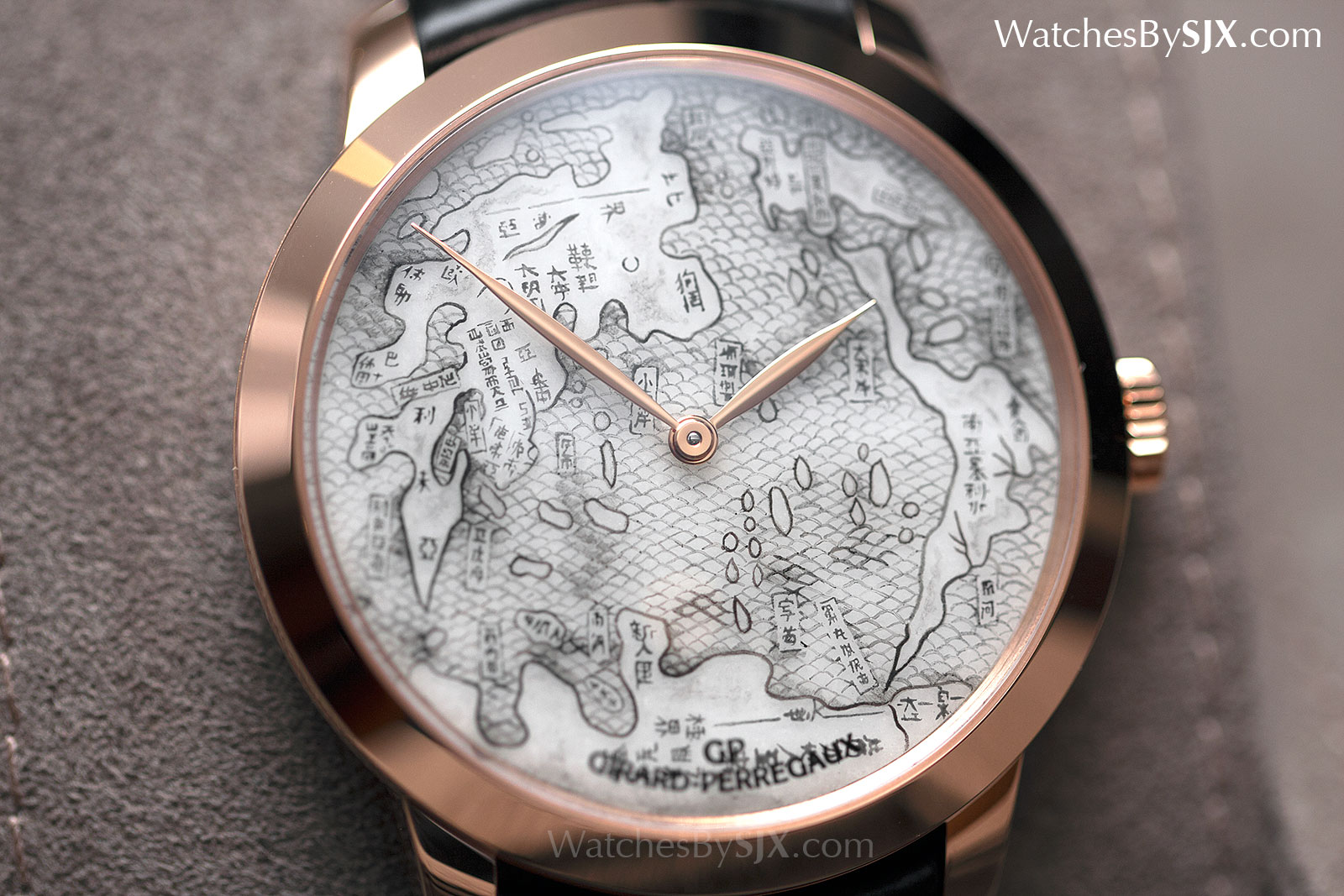 Typically associated with complications like its signature tourbillon, Girard-Perregaux took a different tack at Baselworld 2015 with the Chamber of Wonders – three timepieces with plain gold cases and intricately decorated dials depicting maps from the 15th and 16th centuries.

The Pearl of Wonders

The first watch in the Chamber of Wonders trio is The Pearl of Wonders, decorated with an atlas of the world from the early 15th century. Drawn by Arab historian Ibn al-Wardi, the atlas is circular, depicting the world in a stylised manner with the Arabian peninsula at its centre. It’s recreated with a 0.7mm slice of sodalite stone, with the pale, spotted blue surface of the stone forming the water on the map. Tiny pieces of papyrus are flattened onto the sodalite with a press, then painted with the details of the map – a task that takes some 28 hours. Once complete the entire surface is coated with clear lacquer to preserve the miniature atlas. Inspired by a world map drawn by Jesuit priest Matteo Ricci for the Wanli Emperor of the Ming Dynasty, The Terrestrial Map is has a dial made of white jade with a miniature painting in India ink. A mixture of water, soot and a binding agent, India ink is used to recreate the East Asian portion of a world map drawn by Ricci in the 16th century. Having been invented in China, India ink is an appropriate medium for the work, which requires a deft hand India ink dries speedily, leaving little time to fix mistakes. 17 hours with an exceptional fine brush and microscope is needed to complete the map. This wristwatch is decorated with a reproduction of Novus Orbis, a world map drawn by Sebastian Münster, a German cartographer who was active in the first half of the 16th century. Tiny pieces of semiprecious stone ranging from aventurine to nephrite are used to remake Novus Orbis, giving it colour that makes it the most vivid of the trio. Each piece is cut from a disc of stone 0.5mm thick and then carefully applied by hand. Once complete the map is finished with miniature painting to give minute but important details, like the dismembered adventurer who wandered into cannibal territory. Each of the three watches has a 40mm, 18k pink gold case. Inside is the calibre 3300, a slim, self-winding movement. Girard-Perregaux uses this reliable calibre in practically all of its automatic watches and also supplies it to brands like MB&F.