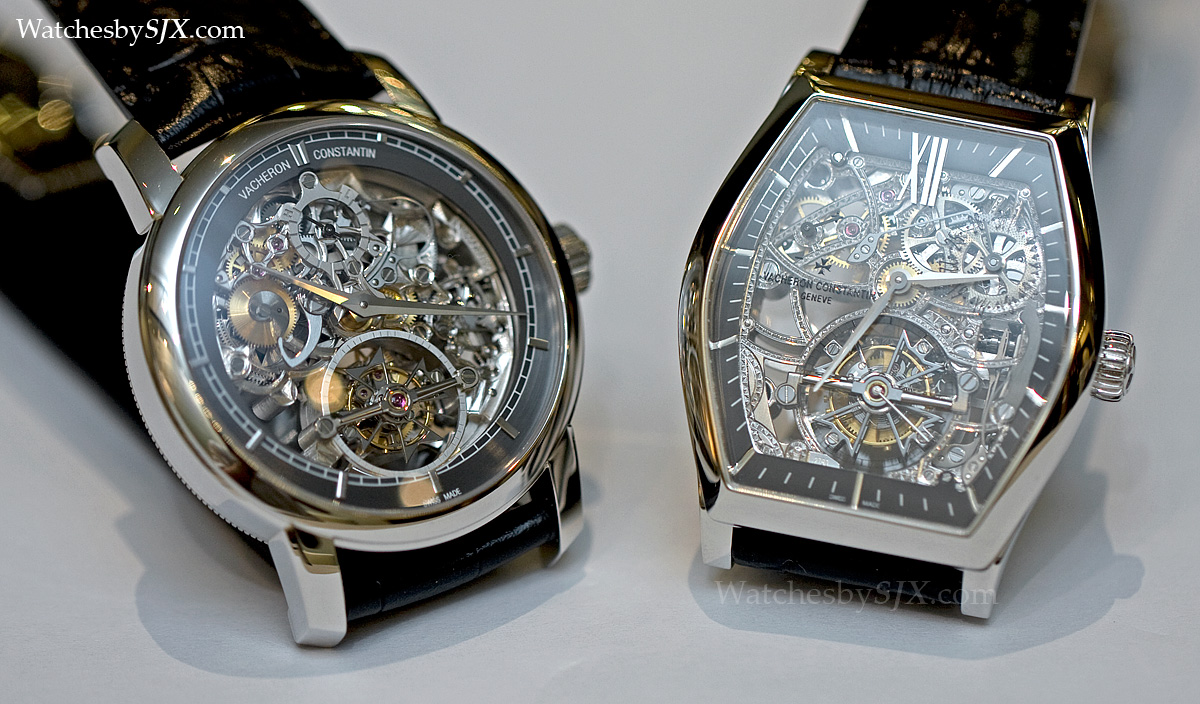 Vacheron Constantin, more so than its cross-town rival Patek Philippe, has always been amongst the best at skeletonised timepieces, including open-worked complications ranging from chronographs all the way to minute repeaters. In the nineties Vacheron Constantin offered its skeleton tourbillon in both round and tonneau cases, and at SIHH 2014 the brand returned to form with two brand new skeleton tourbillons.

Both are beautifully open-worked and cased in platinum, but the similarities end there. The Malte Tourbillon Openworked is elegant and tonneau shaped with delicately shaped bridges. On the other hand, the Patrimony Traditionnelle 14-Day Tourbillon Openworked is a larger and heftier timepiece, both in terms of the case and the styling of the movement.

The pair of watches, however, are skeletonised and finished to the highest of standards, putting them at the very peak of skeletonisation. By way of comparison, the Jaeger-LeCoultre Master Grande Tradition Perpetual Calendar 8 Days Skeleton is already very good, but these tourbillons from Vacheron Constantin are evidently finer (and correspondingly pricier).

The simpler of the pair is the Malte Tourbillon Openworked, which is based on the Malte Tourbillon, and is equipped with the 2790 SQ calibre which features a date function at two o’clock and power reserve display at ten. For the skeleton version the major components of the movements, namely the bridges, base plate as well as larger parts like the barrel, have been reduced to the bare minimum by drilling and cutting away excess material. And then each part is laboriously hand-engraved with a triangular geometric motif, a process that takes nearly a week. Engraving will inevitably distort the flatness of the parts, which means they have to be carefully tweaked during assembly to ensure they fit and function properly. Beyond the engraving the movement is also finished the standards of the Geneva Seal. The bridges, for instance, have drawn flanks and polished countersinks. All the steel parts of the movement, like the tourbillon bridge and cage, as well as the jumper spring for the date hand, are beautifully finished. Particularly beautiful is the steel bridge of the tourbillon, which is not just finished with speculaire polishing, also known as black polishing for the apparently black colour of the steel at certain angles, but also rounded on each of its arms. An unusual feature of the skeleton Malte Tourbillon is the almost imperceptible sapphire dial, on which the scales for the date, power reserve and sub-seconds are printed. A narrow aperture has been cut into the sapphire dial for the polished steel bridge of the tourbillon. The platinum case measures 38 mm wide and 48.24 mm, maintaining the elegant proportions of the Malte series. Notably, the case back is slightly convex, curving outwards, echoing the shape of the front of the case. The second skeleton tourbillon Vacheron Constantin presented this year is the skeleton version of its Patrimony Traditionnelle 14-Day Tourbillon. This boasts twin barrels and a resulting two week power reserve, the longest of any skeleton tourbillon on the market. This is hand-wound, with a power reserve display at 12 o’clock. And it has no dial, so the hands just float above the movement. The process of completing the 2260 SQ movement is similar to that of the Malte Tourbillon. The parts are first open-worked and then engraved. Compared with the regular version of the 14-Day Tourbillon, the skeleton version requires an extra 40 hours of engraving and 10 hours of finishing. Here the open-working is leaves behind stronger forms and broader lines. What remains of the bridges and base plate is minimal, but more substantial than with the Malte skeleton. The parts are engraved with bold, broad strokes reminiscent of brush strokes and bring to mind bamboo. This aesthetic suits the case, which at 42 mm wide and 12.22 mm high is actually large. Its size necessary to accommodate the largish, 12 3/4′” (29.1 mm) movement. A step in the bezel as well as the case back break up the vertical lines on the side, reducing its apparent height. Like its Malte cousin this has the Geneva Seal, with a correspondingly gorgeous movement finish. The tourbillon regulator is identical to the one found in the Malte tourbillon, except for some minor differences in the shape of the ends of the bridge.