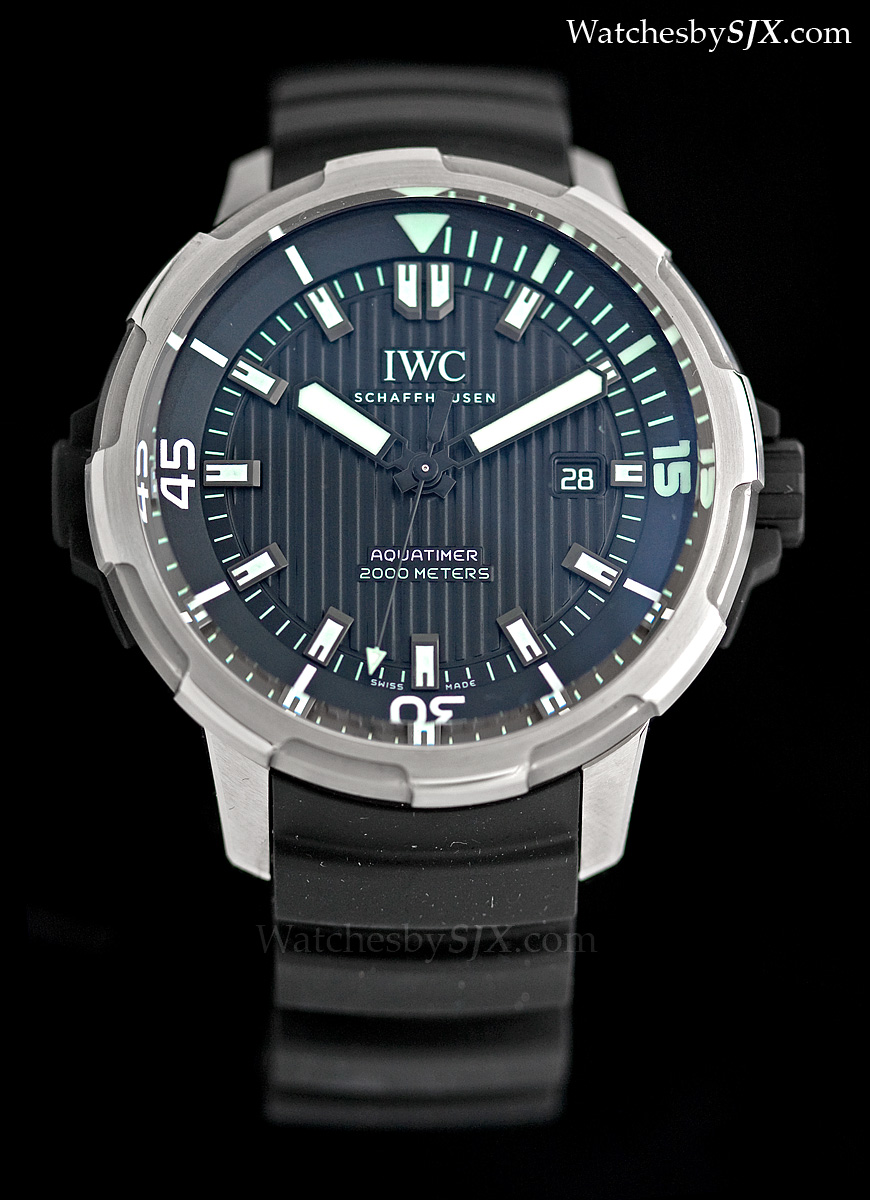 Water resistant to 2000 m and entirely in titanium, the IWC Aquatimer Automatic 2000 is the flagship dive watch of the revamped Aquatimer collection which was just unveiled at SIHH 2014. IWC’s lineage of 2000 m rated dive watch started with the Porsche Design Ocean 2000 in 1982, and continued with subsequent GST and Aquatimer models. Introduced at SIHH 2014, the Aquatimer Automatic 2000 Ref. 3580 is the fifth in the 2000 m series. At 46 mm in diameter, the Aquatimer Automatic 2000 is the largest dive watch IWC has ever made. But the case is entirely titanium, which gives it some heft without turning it into a diving weight. The key feature of the Aquatimer Automatic 2000 (and also the rest of the new Aquatimer collection) is the SafeDive bezel. It is basically a notched external bezel linked to the internal timing bezel via clutch. So though the external bezel can rotate in both directions, it only turns the inner bezel counter-clockwise. The SafeDive bezel is clever, if a little elaborately engineered. But the best feature of the Aquatimer Automatic 2000 is the wonderfully thick, domed sapphire crystal. It looks and feels like (and probably is) one of the most costly components of the entire watch. That being said, the crystal sits several millemetres above the bezel, which makes it prone to chips on its edge. The large dial is black with a vertical stripe guilloche, perhaps inspired by the deck of a boat. Legibility is excellent, though the strong green tone of the SuperLuminova is an acquired taste. A diving helmet is etched on the case back, under which sits the IWC cal. 80110, a manufacture movement loosely based on the gear train of the Valjoux 7750. The case is well finished but not impressively so. All surfaces are finely brushed, with polished bevels on the lugs, and some polished surfaces on the bezel. But the case is mainly comprised of simple, straight lines, while the finer details of the bezel are not especially refined. The Aquatimer Automatic 2000 is available only on a rubber strap, with the option of an extra-long version to fit over a wetsuit. Fortunately the quick-change mechanism for the strap is intuitive and easy to operate. Just press a button on the back of the strap and it comes right off. With a retail price of 13,900 Singapore dollars, equivalent to about US$11,000, the Aquatimer Automatic 2000 is a pricey but sufficiently well made dive watch.