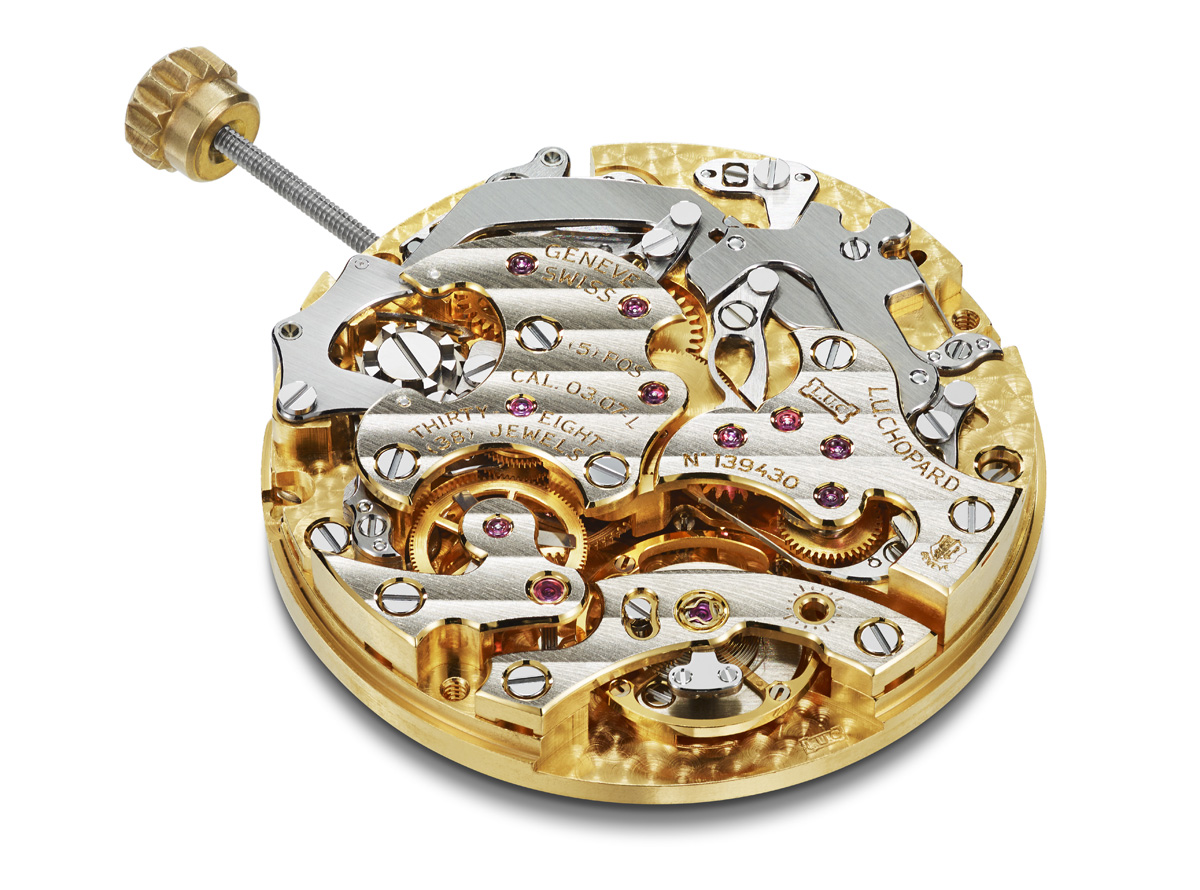 With the new Calibre L.U.C 03.07-L Chopard joins a select group of watch brands who can claim to manufacture their own high-end chronograph movement. Based on the automatic Chrono One movement introduced in 2007, the Calibre L.U.C 03.07-L reveals much more of the chronograph mechanism since there is no rotor and winding bridge. Though it shares many similarities with the automatic Chrono One calibre L.U.C 03.07-L will appeal much more to chronograph traditionalists. The 38-jewel L.U.C 03.07-L has several notable features, including the proprietary Variner (short for “variable inertia”) balance wheel with adjustable weights. Though its description might resemble that of a traditional chronograph movement – manual-wind with column wheel – it is a modern construction with the usual amenities.

For one, it has a vertical clutch, which allows for constant running of the chronograph without affecting amplitude, meaning that timekeeping remains good even if the chronograph is left engaged. Notably, the chronograph levers are wide and flat, which give the movement a thinner profile, though such levers are less attracted than the slim levels on more traditional constructions like the Lemania-based CH27 used by Patek Philippe. And the column wheel is position near the crown, meaning that the pushers trigger the column wheel directly, instead of using a lever and fulcrum principle common in old school chronographs (which have the column wheels set farther away from the pushers). The movement also features the two-tone plating Chopard has favoured in recent models like the LUC 1963. Rhodium plating with Geneva stripes decorate the top surfaces of the bridges, while the bevels, flanks and countersinks are gilded, as is the base plate. This highlights certain elements like the anglage. Like the rest of Chopard’s upper-end LUC movements, the L.U.C 03.07-L is Geneva Seal certified, meaning it meets both the decorative and functional criteria specified by the revised Geneva Seal. We don’t know what watch this will appear in, but our fingers are crossed. Chopard makes beautiful and even remarkably engineered movements, but its designs are sometimes hard to grasp. More details on this movement will be published at Baselworld 2014.