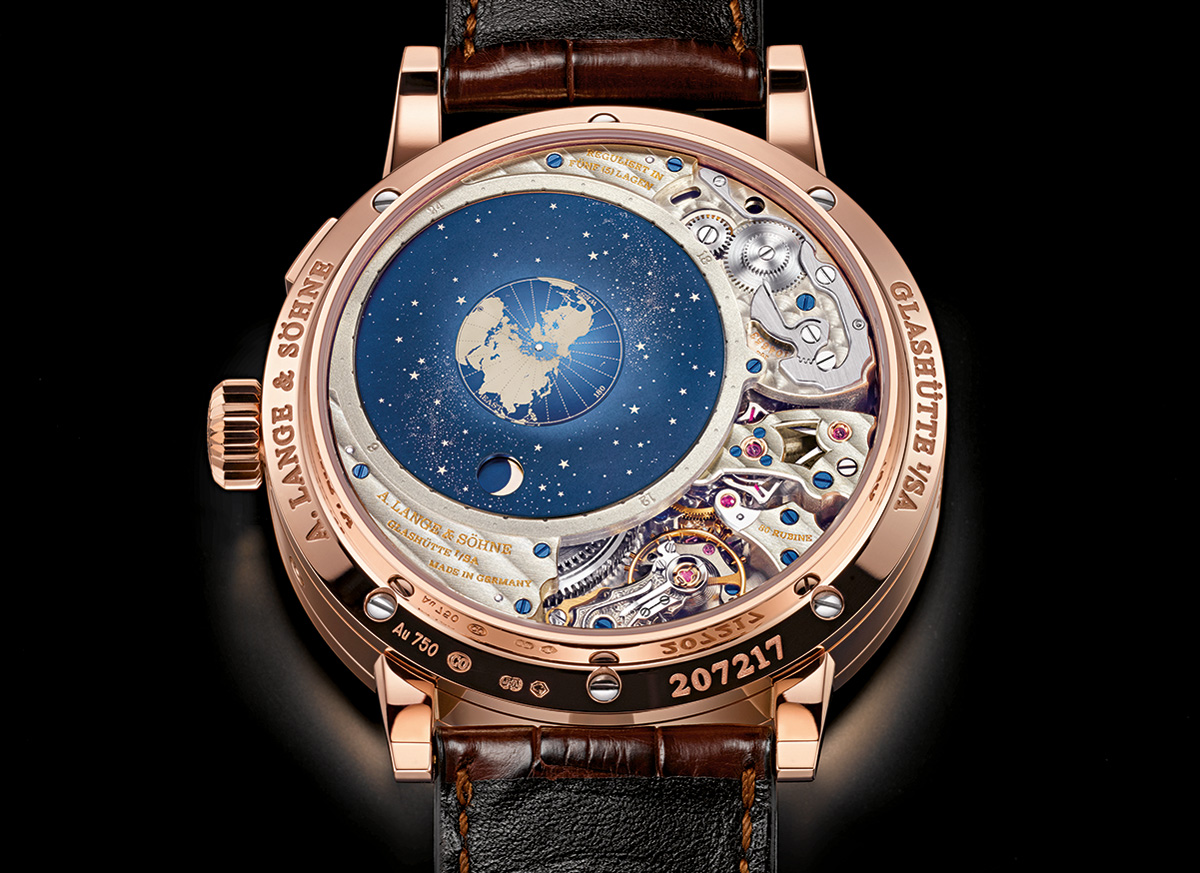 The Richard Lange Perpetual Calendar Terraluna features an instantaneous perpetual calendar on the dial, while a celestial display showing the relative positions of the Earth, Moon and Sun, as well as a moon phase, are found on the back of the watch. All of that is powered by a movement with a 14 day power reserve, fitted with a constant force escapement. At SIHH 2014, Lange has just unveiled its first timepiece with a celestial display, the Richard Lange Perpetual Calendar Terraluna. It features a perpetual calendar and power reserve on the regulator-style dial, and on the movement an orbital moon display indicates not only the phase of the moon, but also its position relative to the Earth and Sun. Visually the Richard Lange Perpetual Calendar Terraluna takes after the Richard Lange Tourbillon Pour le Mérite launched in 2011. Both have a regulator dial, with the hours and minutes separated into three sub-dials. This layout was inspired by an 1807 pocket watch made by Johann Heinrich Seyffert, a Dresden watchmaker. The perpetual calendar functions of the Terraluna are laid out symmetrically in apertures around the dial. At 12 o’clock sits the large date display, with the leap year indicator at two o’clock. Further down are the day and month on each side of the dial, and at the bottom edge is the power reserve display, indicated in days.

All the calendar indications jump instantaneously at midnight thanks to spring loaded levers, and can be advanced simultaneously via a pusher at nine o’clock. Additional, recessed pushers in the case allow for individual adjustments of the month, day and moon. The L.096.1 movement of the Terraluna has two large, stacked mainsprings (which are wound via the crown), giving it a power reserve of 14 days. It has similar technical features as the movement of the Lange 31, which a 31 day power reserve. In fact, the Terraluna uses the same constant force mechanism developed for the Lange 31, in the form of a 10 second remontoir, which releases a fixed amount of torque to the balance wheel every 10 seconds.

Though the remontoir is visible to the right of the balance wheel, most of the movement is covered by the orbital moon display. It comprises three discs, two on top arranged concentrically and one below. On the top, at centre is the disc representing the Earth, showing the planet as seen from the North Pole, which revolves once every 24 hours. Around the Earth disc is the celestial disc studded with stars, along with a round aperture representing the moon. The celestial disc orbits the Earth once a month, actually 29 days, 12 hours, 44 minutes, and 9.6 seconds to be exact. This gives the moon phase an error of one day in 1058 years. Below that is the moon disc, which rotates to indicate the age of the moon in the aperture on the celestial disc. The balance wheel represents the Sun, so on the day of a full moon, the Earth sits in between the Moon and the Sun. The Earth disc also functions as a day and night indicator, with daytime in the hemisphere facing the balance wheel and vice versa. When crossing time zones, the Earth disc has to be unlinked from the time display so that the time can be set. Pressing the button at 10 o’clock while setting the time ensures the Earth disc stays in place when the new time zone is set. With 787 components, including 80 jewels, the Terraluna is a complex watch, with a large, 37.3 mm diameter movement thanks to the two large mainsprings. The resulting watch is correspondingly large at 45.5 mm wide and 16.5 mm high.