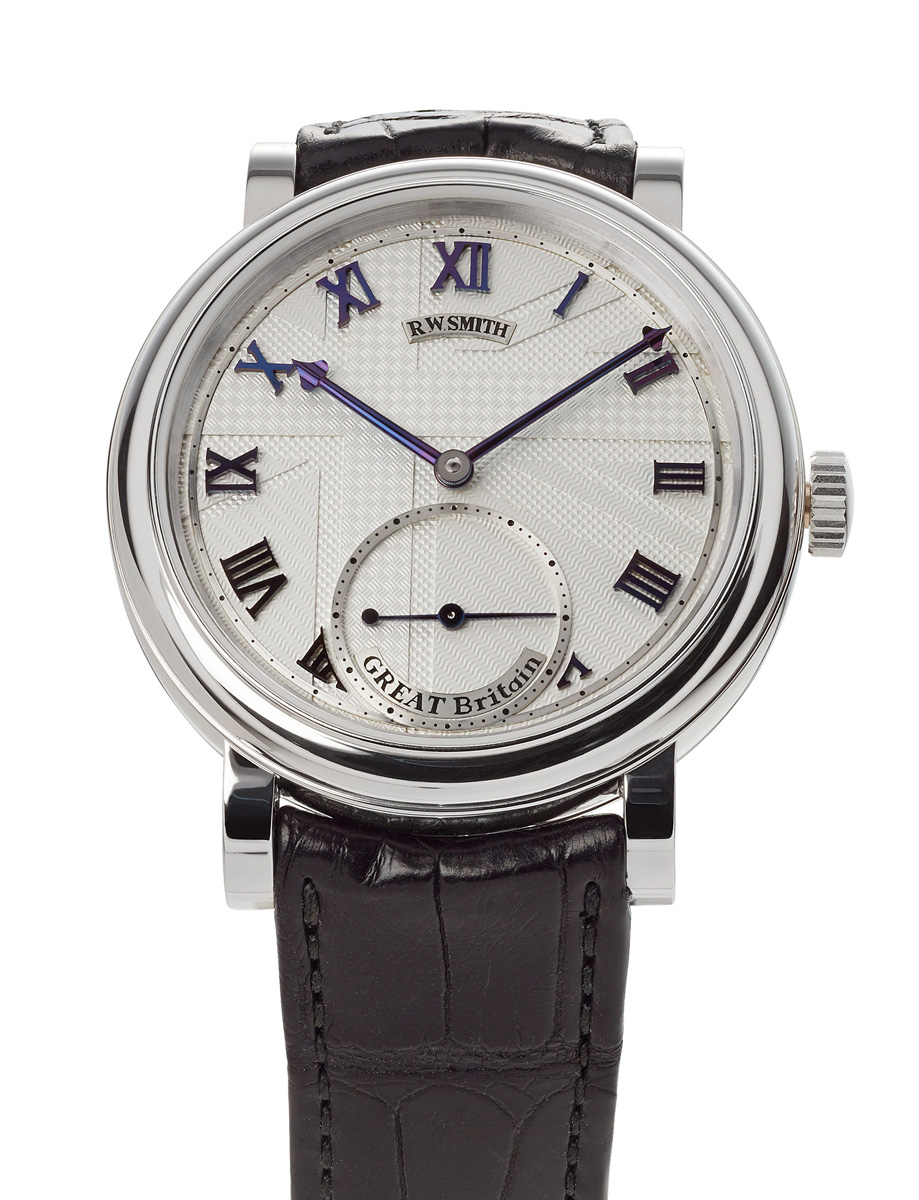 Now in its third year, the GREAT Britain campaign uses the best of what Britain has to offer in order to promote the country overseas. Roger W. Smith, the protege of the late George Daniels, being the only independent, high horology watchmaker based in the British Isles, was selected to create a wristwatch for the campaign.

The result is the GREAT Britain, a platinum case wristwatch based on the Series 2, fitted with a unique Union Jack dial and a highly decorated movement. According to Roger Smith, the GREAT Britain, which took 10 months to complete, is valued at an eyebrow-raising £180,000, equivalent to about US$295,000. It is on loan to the campaign for its duration and will be exhibited around the world.

Based in the Isle of Man, Roger Smith makes practically the entire wristwatch in his own workshop, and in the traditional manner. Even processes which are normally outsourced, like hand-engraving the dial, are done in-house. The platinum case for instance starts out as three strips of platinum, which are heated and then coiled into circular rings, soldered and then pressed, forming the bezel, middle case and case back. Because the dial has multiple layers to form the Union Jack motif, the several pieces of sterling silver had to be individually turned on a rose engine for the guilloche, and then soldered together to form the complete dial. Notice that there are three distinct guilloche patterns used on the dial. And the indices are blued steel and all the text is hand-engraved. Also made of blued steel are the hands, which are in Roger Smith’s characteristic style. They are hand-made, very substantial and beautifully formed. The hand-wind movement is based on the Series 2 calibre, and equipped with the second generation Daniels Co-Axial escapement which has a substantially lighter and more efficient escape wheel. Finished with gilt frosting, the movement has all the elements of traditional watchmaking, including jewels in screwed chatons and blued steel screws. A particularly English touch is the three quarter plate with its raised barrel bridge hand-engraved with a floral motif. A triangular sterling silver medallion on the three-quarter plate is engraved with three legs joined at the thigh, the Triskelion symbol of the Isle of Man.

The GREAT Britain watch is presented in an English oak box, decorated with the Union Jack, made by David Linley, a high-end furniture maker who is also the nephew of Queen Elizabeth.