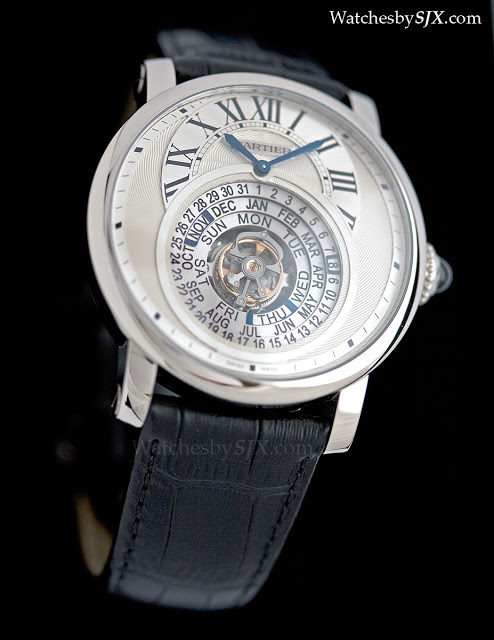 Soon to be launched officially at SIHH 2014, the Rotonde de Cartier Astrocalendar is a perpetual calendar with tourbillon that introduces a novel ‘amphitheatre’ display for the calendar, as well as an entirely gear-based perpetual calendar mechanism that is far more robust than conventional set-ups. The Cartier Astrocalendaire was conceived by the talented Carole Forestier, Cartier’s head of development, and sticks closely to the philosophy established for the brand’s Fine Watchmaking line. It re-imagines an existing complication, in this case the perpetual calendar, making it different (hence the new calendar display), but also improving it (the gear-based perpetual mechanism). Unlike conventional perpetual calendars with multiple sub-dials or windows, the Astrocalendar has the calendar display arranged in concentric, stepped rings, with a flying tourbillon at the centre. The outermost ring is for the date, followed by the month, and then the day. Each of them is indicated by a blue PVD window (which incidentally is made via three-dimensional printing). The changeover of the calendar windows is gradual, with the date jump taking place from roughly 11:25 pm to 12: 00 am, or about 35 minutes. On the longest jump, from February 28 to March 1, it takes four hours. That gradual jump is due to the nature of the calendar mechanism, which is driven entirely by gears. The springs and clicks in typical perpetual calendars are absent in this movement. Springs and clicks allow for instantaneous calendar jumps, but also bring about certain functional issues. One is the non-linear torque delivered to the escapement, because of the sudden increase in power require by the calendar in the lead-up to the jump, and also the jump itself. The other issue is owner induced – adjusting a conventional perpetual during the calendar changeover is likely to break the mechanism, hence the common warnings about not setting the calendar from 9 pm to 3 am.

Because the Astrocalendaire movement is gear based, it eliminates these problems. For one, torque is also linear regardless of the calendar changeover, since all the indications move gradually as the gears turn. Compared to a conventional perpetual calendar mechanism, the Astrocalendaire has an 80% improvement in amplitude during the lengthiest calendar changeover. The brain of the perpetual mechanism is a complex, multi-level wheel comprising 19 components, which controls and coordinates the calendar functions. It includes three retractable teeth, which account for the February 28 to March 1 leap year changeover. A patent is pending on the retractable teeth, an innovation which can be applied in other complications in which the indicator moves in variable increments. All of the calendar functions are controlled by the central, 19-part gear, except for the day. Because the day constantly advances in a linear manner, from Monday to Sunday, it is linked to the hour wheel. That allows the day to advance with the time, regardless of date or month or leap year. The gear-based perpetual mechanism also makes it more robust since it cannot be broken. All the perpetual functions (except for the day) are set via the crown, and more importantly, adjusting the calendar during a changeover will not damage the mechanism. Though this is not a new innovation (IWC pioneered this with its Da Vinci in the eighties), adjusting the calendar via the crown is eminently convenient. In the case of the Astrocalendaire, one full turn of the crown leads to nine jumps of the date, so just over three full turns of the crown is required to advance the calendar by one month. Taking it through an entire four year cycle requires 81 turns of the crown, which is tedious but is manageable, being equivalent to manually winding a watch with an eight day power reserve. But the Astrocalendaire has one significant, additional advantage – the calendar can be set backwards and forward. So if the calendar is accidentally set beyond the current date, it can easily be reversed. This eliminates the inconvenience of having to wait until the actual date catches up in an ordinary perpetual calendar which can only be set in one direction as is the case with the IWC Da Vinci mechanism. Setting the calendar via the crown also eliminates the annoying problem of having to refer to the instructions to figure out which pusher to press to advance individual calendar indications. But the Astrocalendaire does have one pusher, to advance the day indicator, which is separate from the perpetual calendar mechanism. This is easily accomplished, one push advances it by a day, while a week takes seven. Even if the calendar seems complex at first glance, it is easy to get used to. The calendar display is large and legible, and the blue windows are easy spotted. However, the Arial font for the calendar text is totally uninspiring; a serif font would suit the overall style better. Turn the Astrocalendaire over and the 9459 MC movement is revealed. The bridges are partially open-worked to reveal the numerous gears, 67 to be exact, of the perpetual calendar mechanism.

And the leap year indicator is perched on one of the bridges. Automatic with a 50 hour power reserve, the movement is made in the freshly opened Cartier high horology workshop in Geneva, which sits above its boutique on the posh lakeside shopping street at Rue du Rhône 35. Because it is assembled and finished in the Geneva workshop, it qualifies for the Geneva Seal, which was revamped in 2011 with the new standards in force from last year. Though the movement decoration is simple in colour, being practically monochromatic, it is carefully executed. Everything is finished appropriately to Geneva Seal standards. One noteworthy detail is the evenly spaced circular graining on the base plate. That being said, the movement is could do with a bit more colour, as well as more complex shapes on the bridges. The movement is a large calibre, as is the calendar display, which is one reason for the 47 mm diameter of the watch. And it is 15.7 mm thick, giving it plenty of heft. The Rotonde de Cartier case do not lend themselves well to such a large case size, because the interrupted lines of the case emphasise, rather than hide, the shape of the watch. The Astrocalendaire is a limited edition of 100 numbered watches in platinum with a retail price of €150,000 before taxes, equivalent to about US$205,000. – SJX Follow us on Facebook, Instagram and Twitter for updates and news.