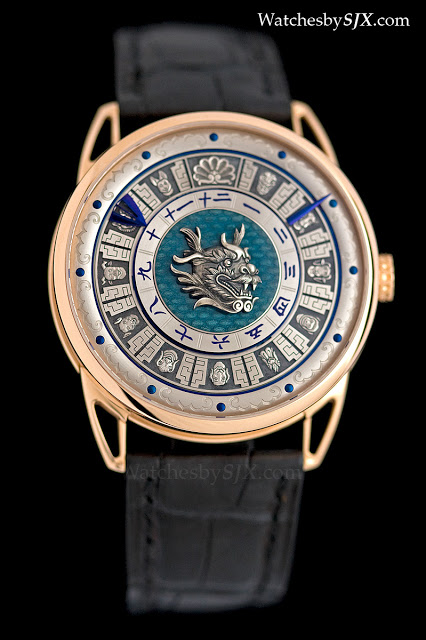 Inspired by the storied animals heads of the water clock fountain of the Old Summer Palace in Beijing, the De Bethune DB25 Imperial Fountain is a set of 12 timepieces, each depicting one animal of the Zodiac. Each watch of the De Bethune DB25 Imperial Fountain Chinese Zodiac set features a hand-engraved replica of one of the 12 animal heads found on the water clock at the Old Summer Palace in Beijing. Believed to have been designed by Giuseppe Castiglione, the Jesuit missionary turned painter to the Chinese court, the animal heads are symbolic of China’s efforts to retrieve its cultural artefacts now residing overseas.  The Old Summer Palace, or 圆明园 (Yuan Ming Yuan), was an expansive palace complex used by the Qing Emperors until its destruction during the Second Opium War. One of its most famous features was a water clock with 12 bronze animal heads, each representing one animal of the Chinese zodiac. Water would spout from each head every two hours, according to the traditional Chinese system of time. The heads, however, were taken during the looting of the palace in 1860. Seven have re-emerged over the years and now reside in Chinese museums, while the fate others are still unknown. Using the bronze animal heads of the fountain as inspiration, De Bethune has created a series of 12 watches, each featuring one animal head, based on the 44 mm DB25 wristwatch. All the watches in the series have identical dials, save for the animal head in the centre. Shown here in all its glory is the Dragon watch in rose gold. In the centre is a fired enamel plate on which the animal head sits. Each hand-engraved head is a replica of the original from the fountain. The animal head is solid gold, and intricately engraved. Around the head the numbers one to 12 are engraved in Chinese characters, and beyond them are the 12 animal heads of the zodiac, also hand-engraved. So as not to obscure any of the engraving, the blued steel hands are peripheral hands; they actually sit under the centre of the dial, with only their tips exposed. The minutes are indicated by a slender, blade-like hand, while the triangular hand indicates the hours.

Notably, the Imperial Fountain is a combination of both new and old decorative techniques. The central portion of the dial, comprising the Zodiac heads and numerals, is hand-engraved by Swiss engraver Michèle Rothen, who was also responsible for the dials of the DB25 IX Maya, which was executed in a similar style. The outer chapter ring with the decorative pattern, however, is laser engraved, resulting in precise and consistent lines. This provides a strong but attractive contrast with the nuanced hand-engraving.

The view from the back is as spectacular as that from the front. The bridges and main plate of the hand-wound DB 2145 movement are entirely mirror polished, a finishing style once found on nineteenth century pocket watches but is uncommon today. Combined with the luminous mirror finish are large, blued steel bridges, as well as a blued steel ring around the movement, which creates a beautiful visual effect of rich colour. Up close the movement details are equally outstanding. The countersinks are polished, as are the teeth of the barrel ratchet wheel. The movement has several of De Bethune’s proprietary innovations, including the silicon balance wheel with gold weights, silicon hairspring and its triple parechute shock absorber.

All of this extravagant display of watchmaking comes at a price. Four unique sets in four precious metals will be made, and the retail price in either rose, yellow or white gold is S$2,025,000, including 7% tax (~US$1.62 million). The price of the platinum set has yet to be determined but needless to say it will be dearer. These watches will be available individually as well, but the price of the individual Imperial Fountain Zodiac watch is not yet fixed, but based on the price of the set an individual timepiece will cost approximately S$169,000 (~US$135,000). – SJX