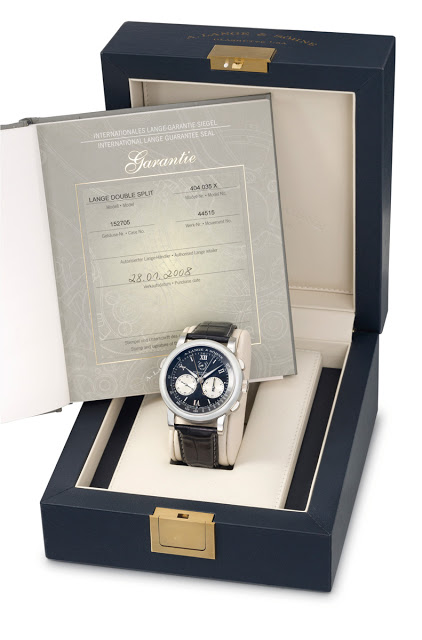 At Christie’s Geneva auction tomorrow a one-of-a-kind Lange Double Split in steel, created as a prototype by Lange, will go under the hammer, and possibly set a new auction record. According to Christie’s, Lange management considered the idea of Double Split with less weighty case, as at the time the watch was only available in platinum. A prototype in steel was thus created. The idea, however, was scrapped, and this remains the only steel Double Split ever made. The steel Double Split is identical to the platinum version, save for the case material. In fact, this steel prototype is fitted to a platinum pin buckle. This steel piece was given the model reference ref. 404.035X, while the regular platinum Double Split is ref. 404.035. According to the accompanying warranty, the watch was sold in 2008, presumably to a Lange employee.

Appearing at auction for the first time, the steel Double Split is lot 282 and estimated at US$130,000-190,000, though it will likely go for much more. A steel Lange 1 (of which about 20 were made), sold for over US$154,000 at Christie’s in May 2013. For Lange collectors, the subsequent lot in this sale, lot 283, is the Lange Zeitwerk Luminous, now long sold out and quite desirable. The Zeitwerk Luminous was the first Lange with a transparent, tinted dial, a formula recently applied to the Lange 1 Lumen.