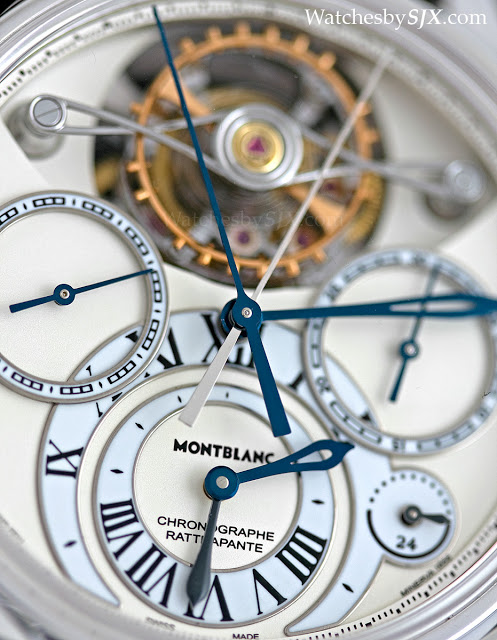 Montblanc unveiled its most complicated timepiece yet at Watches&Wonders 2013 – the ExoTourbillon Rattrapante, combining its novel ExoTourbillon with a traditional split-seconds mechanism. Though Montblanc has not been a watchmaker for long – and it is still finding its footing in horology in terms of branding – the Hamburg pen maker has done created some impressive products. They range from the clever and modern Nicolas Rieussec Rising Hours to the ultra-traditionalist and gorgeously finished Villeret 1858 watches. The new ExoTourbillon Rattrapante falls squarely into the latter category. The special series of TimeWriter concept watches aside, the ExoTourbillon Rattrapante is the most complicated timepiece in the Montblanc Villeret 1858 line-up. It combines the ExoTourbillon with a split-seconds mechanism. Unveiled several years ago, the ExoTourbillon has a simple premise: the tourbillon carriage is positioned under the balance wheel, leaving the balance free of the carriage. And unusually enough, the ExoTourbillon is a four minute tourbillon, completing one revolution every four minutes, as opposed to the conventional one. The fundamental rationale for this stems from the origins of the movement inside, which is a vintage calibre originally designed for a pocket watch; that is why the watch is a chunky 47 mm. Consequently it has a pocket watch sized balance wheel measuring 14.5 mm wide, and a conventional tourbillon carriage would not fit in the movement. And this watch also has a split-seconds mechanism. While it is a complex, the rattrapante mechanism here is utterly traditional, constructed with a horizontal coupling sans isolator, exactly as found in pocket watches of the nineteenth century. It is not particularly outstanding. But it does give the movement an additional layer of complexity, enhancing its visual appeal. Interestingly, Demetrio Cabiddu, Montblanc’s master watchmaker of the old school, indicated he was aware of contemporary and sophisticated split-seconds mechanisms like those of Lange and Patek Philippe. So even though this watch has a traditional rattrapante, there remains the possibility of a new split-seconds from Montblanc in time to come. The movement pictured here is a prototype, so several bits are rough, especially the components of the split seconds mechanism which was added to the base movement. Nevertheless the base movement still reveals many beautiful details, especially in the finishing of the chronograph parts. Visually the ExoTourbillon Rattrapante is cleaner and more refined than the earlier models in the range. Though relatively simple, the dial is elaborately made: the dial material is solid gold and all the sub-dials are in grand feu enamel. This is more atttractive than the fussy designs of before, and a good sign of where the collection is moving, at least in terms of design.