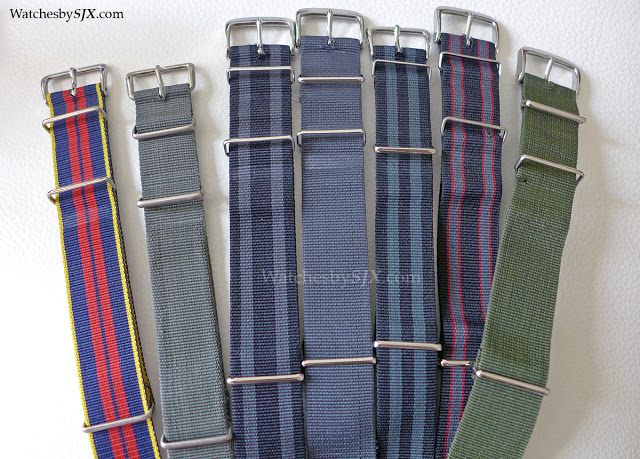 NATO straps have grown, and grown, in popularity. Not just amongst military watch geeks; NATO straps are now sold by clothing retailers and sometimes worn as bracelets sans watch (oh the horror). Watch brands have picked up on this and are generously offering canvas bands along with their watches, the Tudor Heritage Chrono Blue and Blancpain Bathyscaphe being two recent examples.

One-piece straps for military watches which loop under the watch case have been around for a long time. Such fabric straps were used by both the US and British forces (giving rise to the nickname RAF strap, for the Royal Air Force), and were first used in the mid-twentieth century, maybe even earlier. But the two-piece strap now known as the NATO dates to the British MOD Def Stan 66-15 of 30 November 1973 (a slightly later addition to 66-15 is for a leather and canvas two-part band).

Titled “Strap, Wrist Watch”, the Def Stan specifies, in great detail, what a NATO strap should be. Incidentally the strap is not officially known as a NATO strap, instead the name comes from the fact that the strap has a NATO stock number: 6645-99-124-2986 in the case of the army and navy, and 6645-99-527-7059 for the air force. Sometimes also called the G10 strap, after the form needed to order them, the specifications of the NATO strap are simple:

– “Straps shall be supplied with the joints, buckle and loops securely heat-welded in position. The end of each strap and the holes will be heat-sealed.”

– “The strap shall be of straight cross weave nylon ribbon, free from additives which may act as an irritant to the wrist under humid or extreme conditions. The manufacture shall be in accordance with figure 1. The colour of the nylon ribbon (20mm wide) shall be to BS 4800 card number 3, reference 18B25, colour grey.”

Though the Def Stan does not explain, the reason for heat-welding, instead of stitching, is that welded nylon is less prone to coming apart. So any canvas band which is stitched instead of welded does not conform to the original standards. And the original purpose of having the strap loop under the watch is to ensure the watch does not fall off the wrist, even if one spring bar breaks. Because of the strap construction, the watch will remained secured by a single bar, albeit hanging precariously. With a conventional watch strap, a broken spring bar means a quick trip to the floor for the watch.

As the Def Stan specifies, the military issue NATO is Admiralty Grey, though numerous other colours have been made. The colourful striped versions are known as Regimental straps, because they are make for particular regiments according to their unit colours.

The colourful and convenient NATO strap is now commonplace, sometimes even doubling up as a fashion accessory. We unravel the origins of this legendary canvas band.