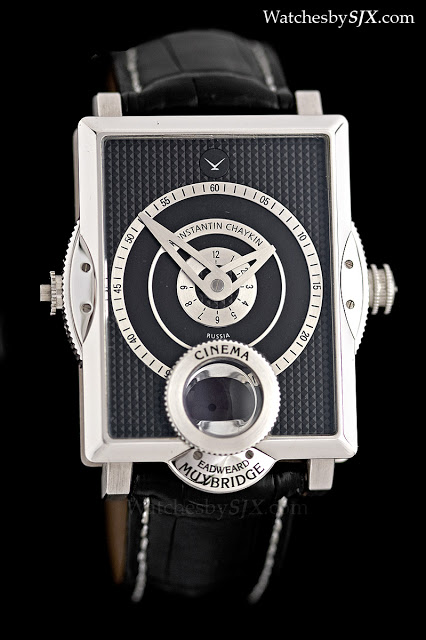 Konstantin Chaykin, the Moscow-based independent who best known work is the extraterrestrial Lunokhod, presented the Cinema wristwatch at Baselworld earlier this year.  Inspired by the work of Eadweard Muybridge, the motion picture pioneer of the late nineteenth century, the Cinema watch has a zoopraxiscope built into the movement.

Essentially a basic device for displaying a motion picture, a zoopraxiscope uses a rapidly spinning disc printed with stop-motion images to create the impression of an animated film. On the Cinema watch, the animation, showing a horse at full trot, is visible through a window at six o’clock. The disc is printed with 12 stop-motion images of the galloping horse, and spins at the rate of one frame per 0.07 seconds.

The movement is powered by twin barrels, one for the time and the other for the zoopraxiscope. Each is wound via the crown, in one direction for the first barrel and the opposite for the second. The watch has a 48 hour power reserve, while the zoopraxiscope will run for about 20 seconds on a full wind. Developed in-house by Konstantin Chaykin, the rectangular movement has an unusual winding click, reminiscent of grand sonnerie pocket watches with their twin barrels. Several jewels are set in gold chatons, while the centre wheel and zoopraxiscope jewels have screwed chatons. The case of the Cinema is steel and measures 32 mm by 42.5 mm. The form is simple, as is the finish. According to Konstantin Chaykin, future versions of this movement are planned, displaying different animations. Custom work is also possible, with a personalised animation for the owner. The Cinema watch is priced at approximately EUR50,000 before taxes. – SJX