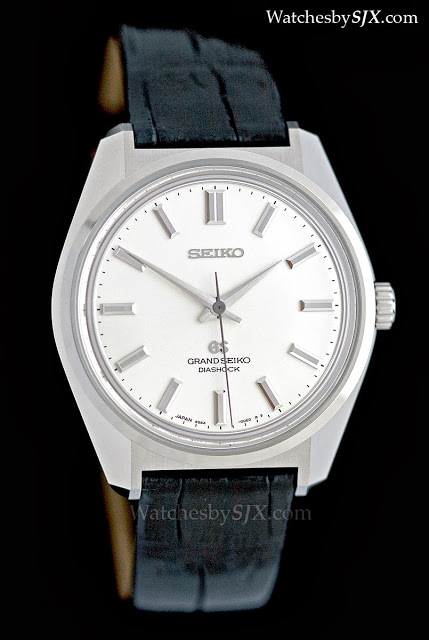 In 1967 Seiko Instruments Inc, or Daini Seikosha as it was then known, unveiled the 44GS. Named after the cal. 4420 inside, the 44GS had a larger and more angular case than previous Grand Seiko watches, creating a recognisable Grand Seiko aesthetic which endures to today. For its 100th Anniversary, Seiko has recreated the 44GS, right down to the most minute of details, as a limited edition.

The case measures 37.9 mm wide, but looks bigger due to its wide, mirror-finished flanks. Finished with a technique similar to black polishing, or speculaire, the polished surface of the case is uncannily flat and smooth. The detail and finishing of the case is exemplary – this is possible the best Grand Seiko case I have seen.  For those who want this case shape but in a more modern form, Seiko also created a pair of limited editions which are modern interpretations of the 44GS. Another notable detail are the hands, which have three facets lengthwise, with the central facet brushed. Though this is not better made than other Grand Seiko watches, like the 130th Anniversary reissue for instance, it has a greater level of detail, especially in the case. The rest of the watch is typical Grand Seiko quality, which is to say impeccable. It has the usual features of Grand Seiko watches – box-shaped sapphire crystal, razor sharp diamond-cut indices, excellent dial printing and applied dial logos.

Inside is the 9S64 manual wind movement, which is hidden by a solid case back. It has three days of power reserve and is equipped with Seiko’s skeletonised escape wheel and pallet fork.