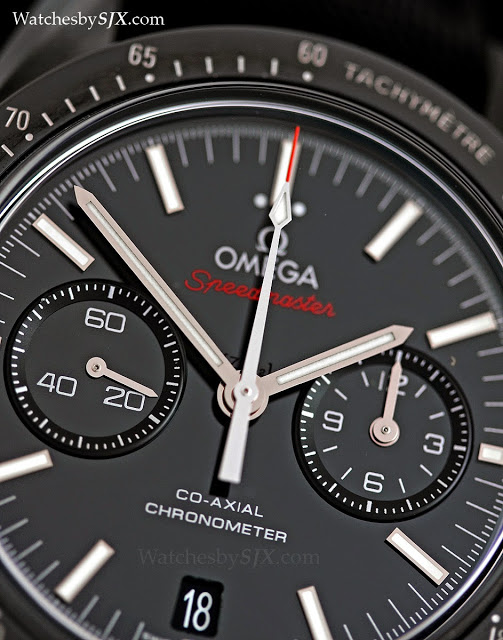 From a case engineering perspective the Speedmaster “Dark Side of the Moon” is notable. For one it is nearly all ceramic – case, bezel, pushers, crown, dial and even the buckle – specifically zirconium dioxide, or “ZrO2” as found in tiny, subtle print on the dial just above the axis for the hands. Besides the material, the case finishing is impressive for Omega has applied the same case finish as found on the steel Speedmaster case. So the signature lyre lugs are brushed on the inside and flanks, with a wide, polished bevel in between. And most notably, the 44.25 mm case is monocoque, meaning the case band, bezel and back are all one piece. Because it is all ceramic, the sapphire case back and crystal in front are secured via gaskets and adhesive. The crystals on both sides are beautifully made, being large and box-shaped. The ceramic dial is deep, glossy black, with applied white gold indices, along with white gold hands. Because the cal. 9300 inside has a co-axial hour and minute counter at three o’clock, the dial only has two sub-dials, unlike the traditional ‘tricompax’ Speedmaster layout. In-house and equipped with a column wheel, the cal. 9300 has Omega’s patented Si14 silicon hairspring and a free-sprung titanium balance wheel. As with other Omega timepieces, the finishing is attractive and well executed, but obviously done on an industrial scale. The cal. 9300 also has an independently adjustable hour hand which can be set in one hour increments – useful if this was a dual time zone but less practical as it is. An inconvenient consequence of this function is the lack of a quick set date, which means the hour hand has to be advanced repeatedly until the correct date is set. The most probable reason for this is that the cal. 9300 is available as a dual time zone movement, so this is an easy solution.

Fitted with a Cordura strap which suits the aesthetic perfectly, the Speedmaster “Dark Side of the Moon” will be delivered in November 2013. The retail price in Singapore is S$15,500 including 7% tax, and in the US the retail is US$12,000. That’s a lot for an Omega Moonwatch, but not so much considering what you get.