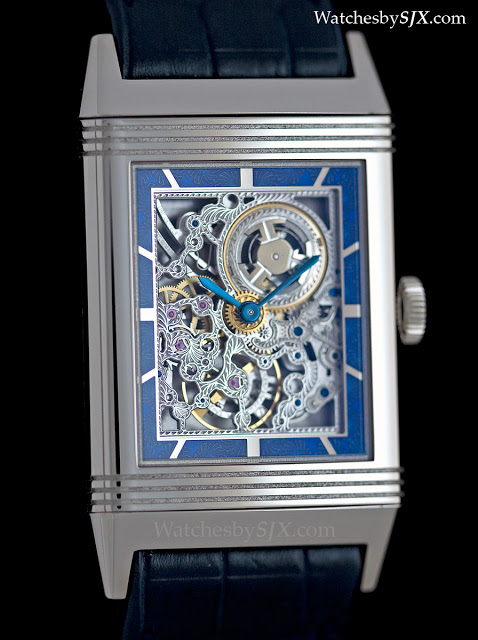 The Jaeger-LeCoultre Grande Reverso Ultra Thin SQ is a slim, open-worked Reverso (“SQ” stands for squelette or skeleton) with its movement framed by a blue enamel border. This is the most extravagant watch in the Grande Reverso family, whose best known member is the 1931 Reverso.

Visible from both sides is the elaborately skeletonised 849RSQ movement, decorated with hand-engraved flourishes front and back. The calibre is actually the rectangular version of the ultra-thin cal. 849, found in most of the brand’s round ultra-thin models. The reverse of the watch shows a similarly decorated movement, along with the white gold frame, except it is merely engraved and not enamelled. It is worth nothing the frame appears to be machine-, rather than hand-engraved, both front and back. This is an elaborately decorated movement, full of texture and colour, and wonderful to behold. That being said, the finishing, both in terms of movement decoration and engraving, is not quite as fine as the topmost haute horlogerie skeletons like those of Vacheron Constantin. The JLC is more affordably priced than its better finished peers, so it is remains an honest product. JLC’s status as a manufacture – more specifically a manufacture for way longer than most other brands, even those that are much older – is exemplified in this watch. In addition to the fact that the artisanal work like enamelling and engraving is done in-house, the cal. 849 used here is not just in-house, but is several decades old, reminding us that JLC has been making ultra-thin movements, for itself and also many others, for a long time. One of my favourite Reversos is the Duoface, a complication perfectly suited to the twin faces of the Reverso. At SIHH 2013 Jaeger-LeCoultre unveiled the latest dual time zone Reverso.