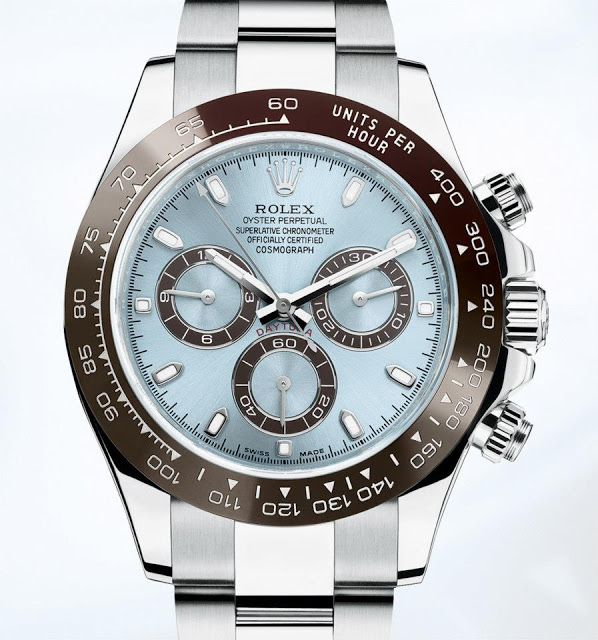 Now available for the first time in platinum, the 50th anniversary Cosmograph Daytona has a Cerachrom bezel and ‘glacier blue’ dial, along with a matching platinum bracelet. Though there was much speculation as to a new Daytona, it appears the adage “the more things change, the more they stay the same” holds true. For the Daytona’s 50th anniversary, Rolex has unveiled a platinum Daytona – the first time this metal is used for the Daytona – with a brown ceramic bezel and a pale blue ‘glacier’ dial.  To match the ceramic (which Rolex terms Cerachrom) bezel, the chronograph registers are ringed in brown as well, bringing to mind the many “Patrizzi dial” Daytonas which pop up at auction. The colour combination sounds odd but I expect it will look quite attractive in the metal. But it is fundamentally the same Daytona as before. The case remains the same 40 mm in size, and the movement is still the cal. 4130 with column wheel and vertical clutch. The retail price is CHF71,500 before tax, which is equivalent to about USD75,800. – SJX