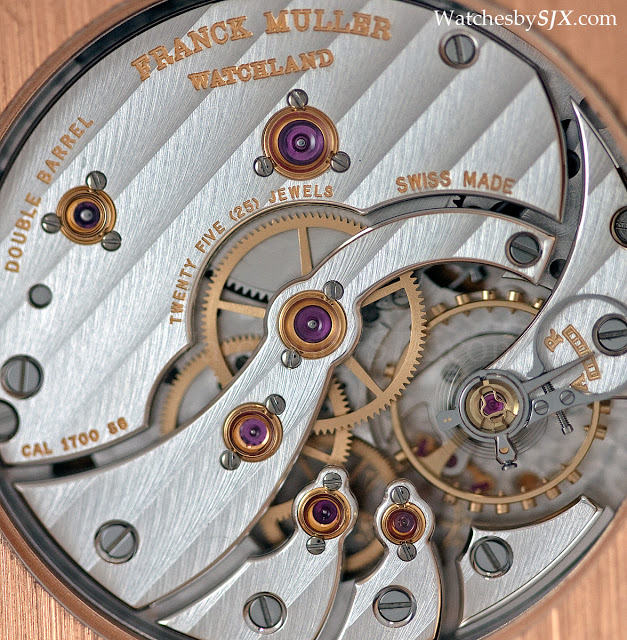 In January, concurrent with the recently concluded SIHH 2013, the Franck Muller Watchland Group held its own exhibition, World Presentation of Haute Horlogerie (WPHH), in a suburb of Geneva. At the show Franck Muller presented the Cintree Curvex Vintage 7-Days Power Reserve, one of the hidden gems of the January exhibition season.

Inside the Cintree Curvex case is the cal. FM 1700, a 31 mm wide movement with seven days power reserve and twin barrels.  The movement layout is distinctly traditional Genevois in style, with elegant bridges, separate cocks for the escape and fourth wheel, as well as screwed, gold chatons for all the jewels on the bridges. The traditional details extend to the escapement, which is a screwed balance with Breguet overcoil and swan neck regulator. A high level of finish is also visible in the movement – notice the bevelled bridges, polished countersinks for the screws and chatons.

A few weaknesses are visible in the finishing, though they are not all obvious. For instance it’s is a shame the bridges don’t have inward angles, and some of the perlage on the base plate is not extremely fine, but overall the movement is eminently respectable. In fact it is among the better finished calibres in this price range. The case is the quintessential Franck Muller shape, in the large 8880 case size which measures 55.3 mm by 39.5 mm. It is available in steel and rose gold, with a lacquered dial in white or black. The tiny window in between 10 and 11 o’clock is the power reserve indicator.  The retail price will be about EUR18,000 (about USD24,000)  for the gold model and EUR10,000 (about USD13,000) for the steel, while the official retail prices in Singapore are SGD32,300 and SGD19,200 respectively.  There is actually a lot of competition in the one week power reserve segment from the likes of Jaeger-LeCoultre, Panerai and IWC; this Franck Muller compares well against them. Designed by the nearly octogenarian Pierre-Michel Golay, this calibre was actually first presented in a round case under his namesake brand a few years ago. Mr Golay joined Franck Muller in 2002, but he is best known for the 25 years he spent at Gerald Genta in its heyday, where he helped develop the thinnest minute repeater movement ever and the grande et petit sonnerie wristwatch. Franck Muller is not now regarded highly as a high horology watchmaker, though few know that Franck Muller himself was one of the earliest members of the AHCI more than 20 years ago. Though he is not longer reflected in the membership role, Mr Muller is the most commercially successful independent watchmaker ever. In recent years, however, Franck Muller as a brand is creating increasingly interesting timepieces, thanks in part to Mr Golay’s contributions. – SJX