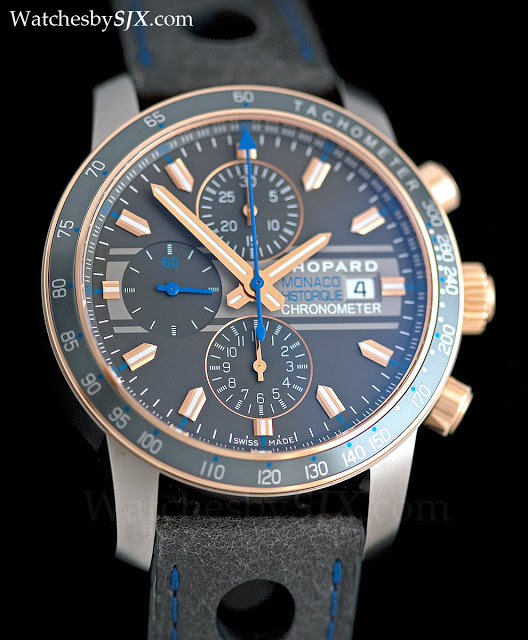 Each year Chopard presents automotive themed limited edition watches, the most well known being the Mille Miglia; the tyre tread rubber straps that have been relentlessly copied elsewhere originated with the Mille Miglia. To me these watches tend to look mostly the same from year to year, but this year’s Grand Prix de Monaco Historique 2012 caught my eye. Two versions are available, the first is an unusual blue and grey with rose gold accents, which is limited to 500 pieces (ref. 168992-9001).

The blue and grey is a subtle combination and not a familiar one for a racing watch. I like the look. And this is about aesthetics; the movement is a Valjoux 7750, albeit COSC certified. The other version is the regular production Monaco Historique (ref. 168992-3032) with a rather forgettable orange and grey dial – seen way too often on racing watches. But I given the striking colours I think this will probably sell better. Both versions have a 42.4 mm titanium case that is 14.67 mm high, pretty ordinary and manageable dimensions for a 7750 based chronograph. Overall this is a moderately priced and attractive sports chronograph; a solid alternative to the usual suspects in this segment from Omega, Rolex, Breitling et al.