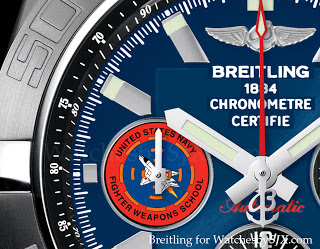 IWC has made much of its association with TOPGUN, the United States Navy Strike Fighter Tactics Instructor program. In fact, IWC has built an entire range of bestselling watches around it.

So it is not surprising Breitling launched its latest watch, the Chronomat 44 TOPGUN, with a rather sniffy press release titled “The real TOPGUN watch carries the Breitling signature”. This is a 500 piece limited edition 44 mm Chronomat with Breitling’s in-house B01 chronograph calibre. According to the press release, “In a meeting held at the [Navy Air Station] Fallon, Nevada base, TOPGUN members unanimously decided to signal their exclusive cooperation with Breitling through the creation of a limited edition bearing their insignia.”

And Breitling will also donate proceeds from the sale of this edition to a charity selected by TOPGUN members. Remember that IWC trumpets loudly its CSR efforts.

So who makes the real TOPGUN watch? I have no clue and I don’t really care. While I find the Breitling B01 movement interesting, the peculiar ostentatious style of most Breitling watches is not really to my taste.

That being said I do respect Breitling for being the only large scale, mass market independent watchmaker, aside from Rolex which doesn’t really count since it’s Rolex. Breitling’s competitors like TAG Heuer, Omega et al are all part of big groups. So kudos to Breitling for prospering on its own.