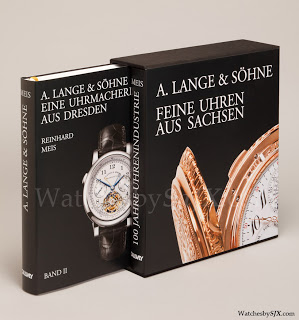 History is a key component of most luxury brands and what better way to express that than a massive, glossy book? This is one of the elementary tactics in building a luxury brand. It bestows legitimacy and learning upon the brand. Montblanc just released its book, Writing Time, earlier this year. Lange’s coffee table book, A. Lange & Sohne: The Watchmakers of Dresden, by Reinhard Meis, was published in 1997. That was only a couple of years after the brand’s rebirth so the book is ripe for an update; Lange has come a long way since then.

After eight years of work, Meis has just unveiled A. Lange & Söhne – Great Timepieces from Saxony, a two volume edition comprising 916 pages and over 2700 pictures. One volume is the revised A. Lange & Söhne – The Watchmakers of Dresden. This details Lange’s 165 year history up to the 21st century. It covers all of Lange’s modern wristwatches, ranging from the Pour le Merite tourbillon to the Double Split, something that the previous edition was missing. The other book, A Momentous Century – The Glashütte Watch Industry 1845-1945, covers the history of watchmaking in Glashütte up to the Second World War. This is not just for historical and academic interest – the place a watch is made is just as important as the brand. That’s why “Geneva” is so often on watch dials.