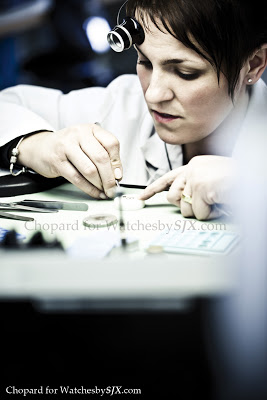 The balance spring is the beating heart of the watch, regulating the release of power from the mainspring and keeping time. Manufacturing the hairspring is a fascinating process but shaping and fitting the hairspring calls for more delicate work. This press release from Chopard nicely encapsulates that work; it is part of a series looking at the various manufacturing aspects of a watch factory, the previous one covered electroplating. If there is one profession that demonstrates the extent to which watchmaking is an affair for specialists, it is that of balance-spring fitter. The régleuses (coming from the French term, as it is a profession mainly exercised by ladies) sphere of activity focuses on the five parts constituting the beating heart of the watch: the balance, the balance-staff, the balance-spring, the collet and the stud. This dying art only exists in a handful of authentic Manufactures; one being the Chopard Manufacture in Fleurier, which continue performing manually and in-house one of the most original and specific of all watchmaking operations: shaping the terminal curve of the balance-spring. The latter is doubtless the most fascinating part of the movement. This tiny flat spring forming a spiral determines the frequency of the balance, its regularity, and thus the precision of the watch itself.

At first glance, the balance-spring is very much like a small metal disc that looks as if it has been covered with an iridescent hologram. Only when carefully observed under a magnifying lens does it reveal its true nature: a flat, thin and coiled hardened steel blade. Equipped with dedicated tweezers, the balance-spring fitter uses a “Spiromatic” machine to adjust it to size by cutting a few coils from the centre in order to adapt the dimension of this central empty space to that of the collet. Also cut are a few external coils to ensure the length of the balance-spring corresponds to the technical specifications of the movement. The collet resembles a small cylinder with a side slot into which the precision timer slides the inner end of the balance-spring which she then blocks with a pin, an operation called virolage or “pinning up to the collet”. After, comes the process of assembling the collet and the balance, after which the length of the balance-spring must be checked and adjusted to size if necessary. The balance-spring fitter constantly checks the perfect parallelism between the balance-spring and the balance. She then fixes the resulting assembly to a dedicated horizontal base that will hold it while she performs the most delicate operation of all: shaping the terminal curve. The goal is to enable the balance-spring to develop concentrically – and not eccentrically – in the course of its expansions and contractions, thereby avoiding an imbalance that could lead to gain or loss in time. To achieve this, the balance-spring fitter twists the terminal coil, first in an upward direction, while creating a slight slope. At the top of the slope, she twists it again in order to place it perfectly parallel with the other coils. And finally, she gives it a slightly smaller radius in order to make a so-called Phillips curve, named after the late 19th century French engineer who described the theoretical conditions that this type of curve should meet. The following stage involves fitting the stud on the outer end of the balance-spring. This microscopic part, the role of which is to join the balance and its spring, is secured to the latter by means of a pin the size of an eyelash. This is also the means used by the balance-spring fitter – who certainly deserves her French name régleuse which also literally means “adjuster” – in making a preliminary adjustment of the frequency of the assembled regulating organ. By shifting the stud along the outer end of the balance-spring, she can adjust the frequency of its beat and thus supply a balance pre-adjusted to a loss of 15 to 60 seconds. It will then be up to the watchmaker, using the index-assembly, to make the final adjustment or rating that will give the watch its required level of precision.