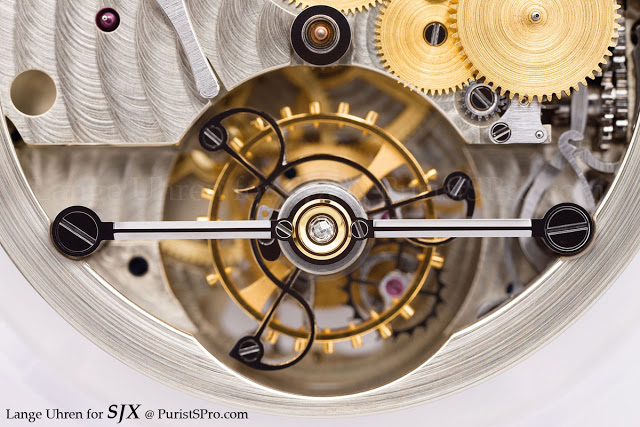 I just received from Lange a wonderful press release, paired with terrific macro photos, outlining some of the most important traditional movement finishing techniques, like striping, perlage and anglage, so well executed by Lange in watches like the Double Split Chronograph. The full press release can be seen below. And fans of Lange will also want to know more about its in-house hairspring manufacturing.

Lange press release: The Beauty of the Invisible Traditional finish techniques at A. Lange & Söhne A. Lange & Söhne timepieces of the 21st century constitute the link to a heritage that began in Saxony more than 165 years ago. From the very beginning, Ferdinand A. Lange described his business philosophy as follows: “With the knowledge that quality craftsmanship always assures the most advantageous purchase, we are aware that we can render the best service to our clientele by supplying only watches of the highest class.” Lange still upholds this commitment to the ethics of the artisan, because this alone creates a little piece of eternity in an ever changing world. Indeed, A. Lange & Söhne timepieces still feature quality hallmarks that were once the norm in high-end watchmaking, but which were gradually abandoned in favour of cost effectiveness in production. Among the typical hallmarks are the surface finishes applied to nearly all movement parts. For the owner of such a piece of art, the composition of aesthetic details is matched by the mechanical precision of the movement. Every single one of them illustrates the manufactory’s uncompromising quest for perfection. Here is an overview of the most important finish techniques: