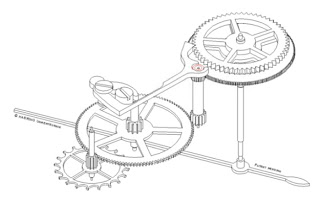 Habring², an Austrian watchmake run by Maria and Richard Habring, has just released its 2011 catalogue in PDF format (opens in a new window). Richard was formerly at IWC and was one of the creators of signature IWC mechanisms like the split seconds and flying tourbillon. Habring² are interesting, honest and well priced and the catalogue is worth a read. It’s not just a catalogue of models but also includes explanations of several mechanisms like the dead seconds.