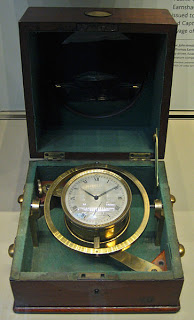 ﻿Last year the venerable BBC ran the radio programme “A History of the World in 100 Objects”, created in collaboration with the equally venerable British Museum. It is a terrific 100 part series that chronicles the history of the world by examining 100 different objects – one item per 15 minute episode – from the British Museum’s collection. Each episode details how an object, even one that is immensely ordinary, shaped history and countries. The series is fascinating and vast in its scope, but presented in an accessible manner.   Episode 91 was dedicated to a marine chronometer, specifically a clock (there were 22 of them onboard) from the HMS Beagle – the ship made famous by Charles Darwin – made by Thomas Earnshaw, circa 1800.

As explained in the wonderful 15 minute broadcast, the marine chronometer, originally invented by John Harrison for the British Admiralty, is possibly the most important mechanical timekeeper of the modern age, inextricably tied linked to the heroism of the high seas and the relentless progress of technology. It changed the way we live and think. In fact, as the narrator, British Museum director Neil MacGregor, grandly but correctly puts it, the marine chronometer ultimately “[changed] our idea of ourselves and our understanding of humanity’s proper place in history.”

You can listen to the programme or read the transcript.