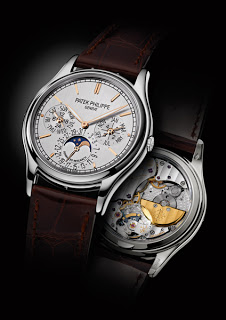 The Advanced Research series began in 2005 with the ref. 5250P, followed by the ref. 5350P in 2006 and ref. 5450P in 2008. All were annual calendars based on the cal. 324, but with each of these watches Patek Philippe gradually introduced silicon components – Silinvar escape wheel, Spiromax hairspring and Pulsomax lever – into the escapement. Currently the Spiromax is standard on the CH28 movement of the 5980 and 5960 and in time to come the silicon hairspring will become standard on all Patek watches.

One of the advantages of the four silicon parts in the new cal. 240 Q Si according to Patek is a gain in efficiency, leading to a 70 hour power reserve instead of the regular 48 hours for the conventional cal. 240. The press release explains this in detail:

“It accounts for a significant increase of energy efficiency attributable to the innovative Oscillomax® subsystem, particularly of the Pulsomax® escapement and of the GyromaxSi® balance. This gain is based on the perceptibly lower mass of Silinvar® parts compared to conventional components, on the optimized geometry of the lever and escape wheel, and on the much-improved aerodynamics and mass distribution of the GyromaxSi® balance, to mention just some of the key reasons. Less energy dissipated means greater efficiency as demonstrated by a power reserve increase of about 50% without having necessitated any modifications of the mainspring, the frequency, or the moment of inertia of the balance. The efficiency of the winding train has also been perceptibly improved.”