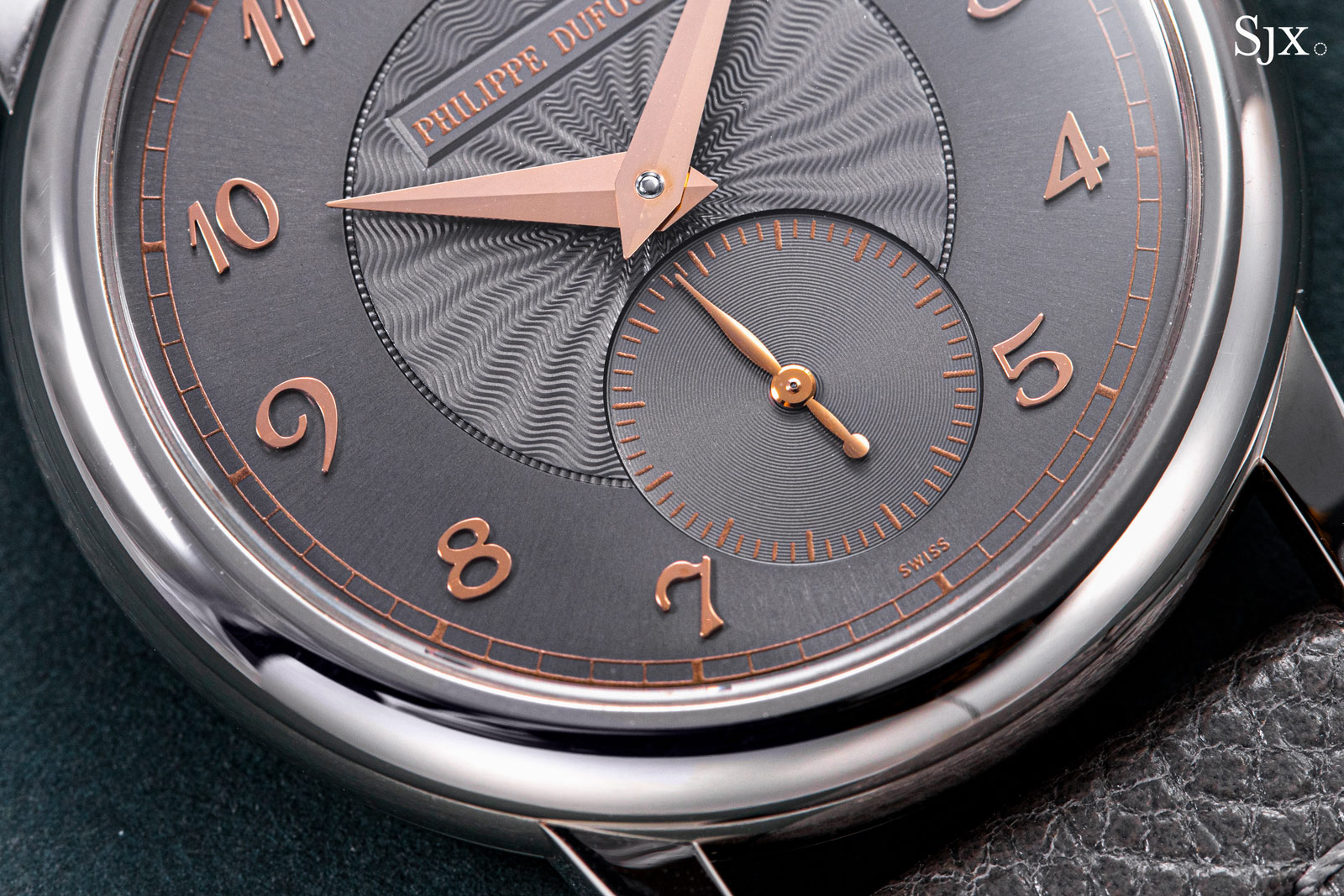 A much-anticipated series of auctions just concluded in Geneva, the first sale season to take place after financial markets started to crack in mid 2022. All the major auction houses – Christie’s, Phillips, and Sotheby’s – staged sales in the Swiss city, and almost everyone who was anyone turned up (or took part by phone or online).

The season’s top performer by the numbers was Christie’s, which sold CHF55.5 million of watches, fees included, largely thanks to the collection of former Ferrari Formula 1 chief Jean Todt. It displaced the traditional number one, Phillips, which sold CHF45.0 million. 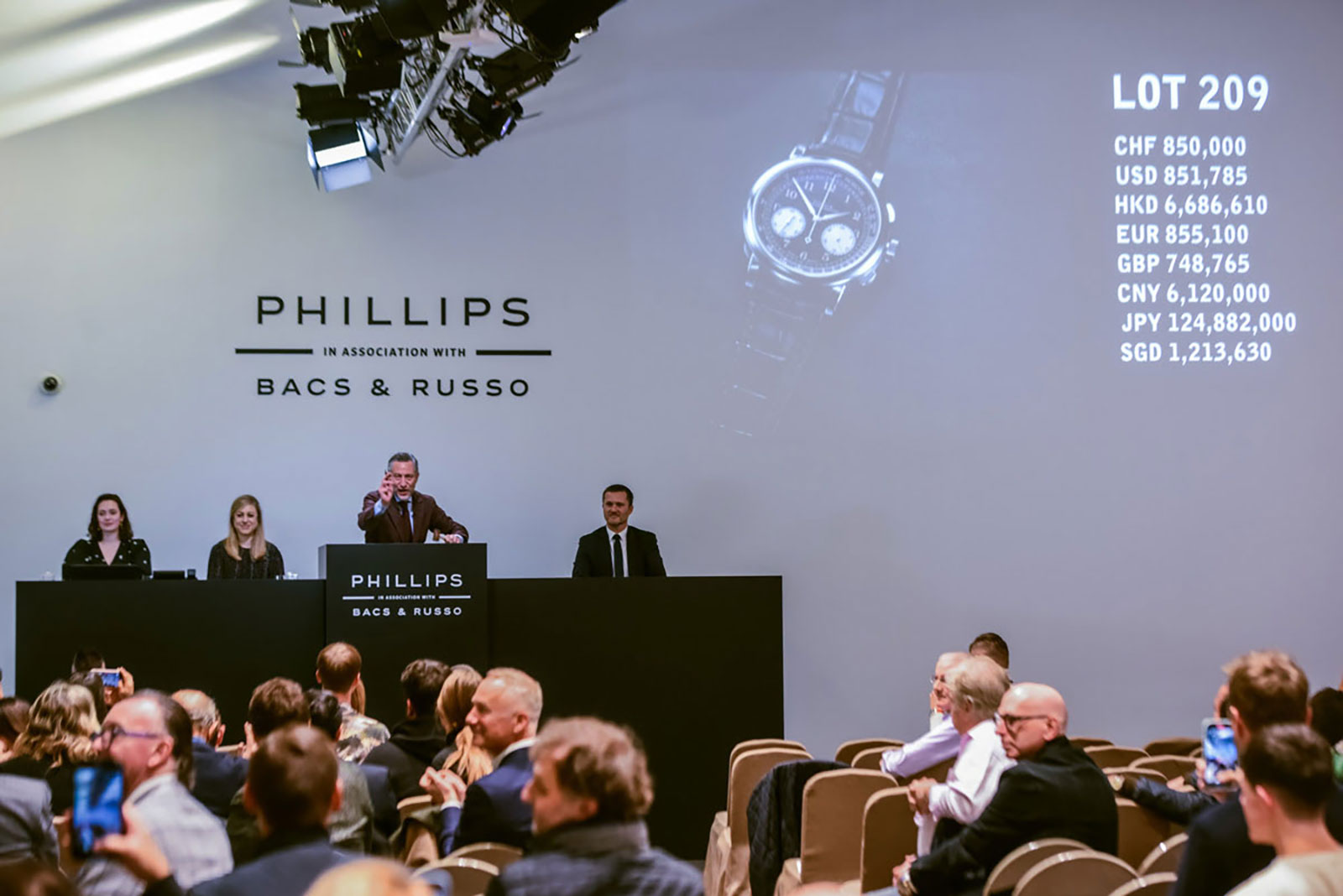 A few takeaways are immediately apparent in the results. One was widely expected: “hype” watches have come off their highs, often by a third or more. Including obvious candidates like sports watches, namely the Nautilus, Royal Oak, and Overseas, but also brands that enjoyed massive run-ups in value during the pandemic like F.P. Journe. Values are still up from the pre-pandemic lows, but if prices overcorrected on the way up, then it is likely they will do so on the way down.

Sotheby’s, for instance, had several dozen examples of various Nautilus and Royal Oak models in its sale, mostly with estimates close to peak values from late 2021. As a result, a third of the watches went unsold.

The dip in values was also evident with F.P. Journe, certainly not a “hype” brand but one that enjoy a stellar run during the pandemic. Three examples of its tourbillon with brass movement sold during the season, all within a narrow band. Two sold for CHF441,000 (one Ruthenium and the other a white gold dial from 2003), while the third for CHF478,800 (a 2003 with a less common pink gold dial). Similarly, the Resonance with brass movement seems to have settled at the CHF200,000-250,000 level. Generally these results are between a quarter and a third off their highs.

Despite the moderation in prices, the very best watches still did well, illustrating a divergence between the good stuff and everything else, the opposite of what happened in 2021.

The “pre-Souscription” Resonance at Sotheby’s, numbered “028” and produced in 1999, sold for CHF1.07 million all in. Importantly, it got to that big number at a brisk pace, indicating confidence and desire on the part of the bidders. One bidder was on the phone and represented by Charlie Foxhall of Sotheby’s Geneva, while the other was online and eventually triumphed.

Some watches even shrugged off economic volatility and achieved new highs. This included the Philippe Dufour Simplicity at Phillips that sold for CHF1.02 million, making it the first Simplicity to cross the million-franc (or dollar) mark, leaving aside the prototype of the anniversary edition.

I can’t think of a specific catalyst for the enduring appeal of the Simplicity, but it could be attributed to the fact that it’s a simple watch to understand, being time only and produced in a small number of variations. 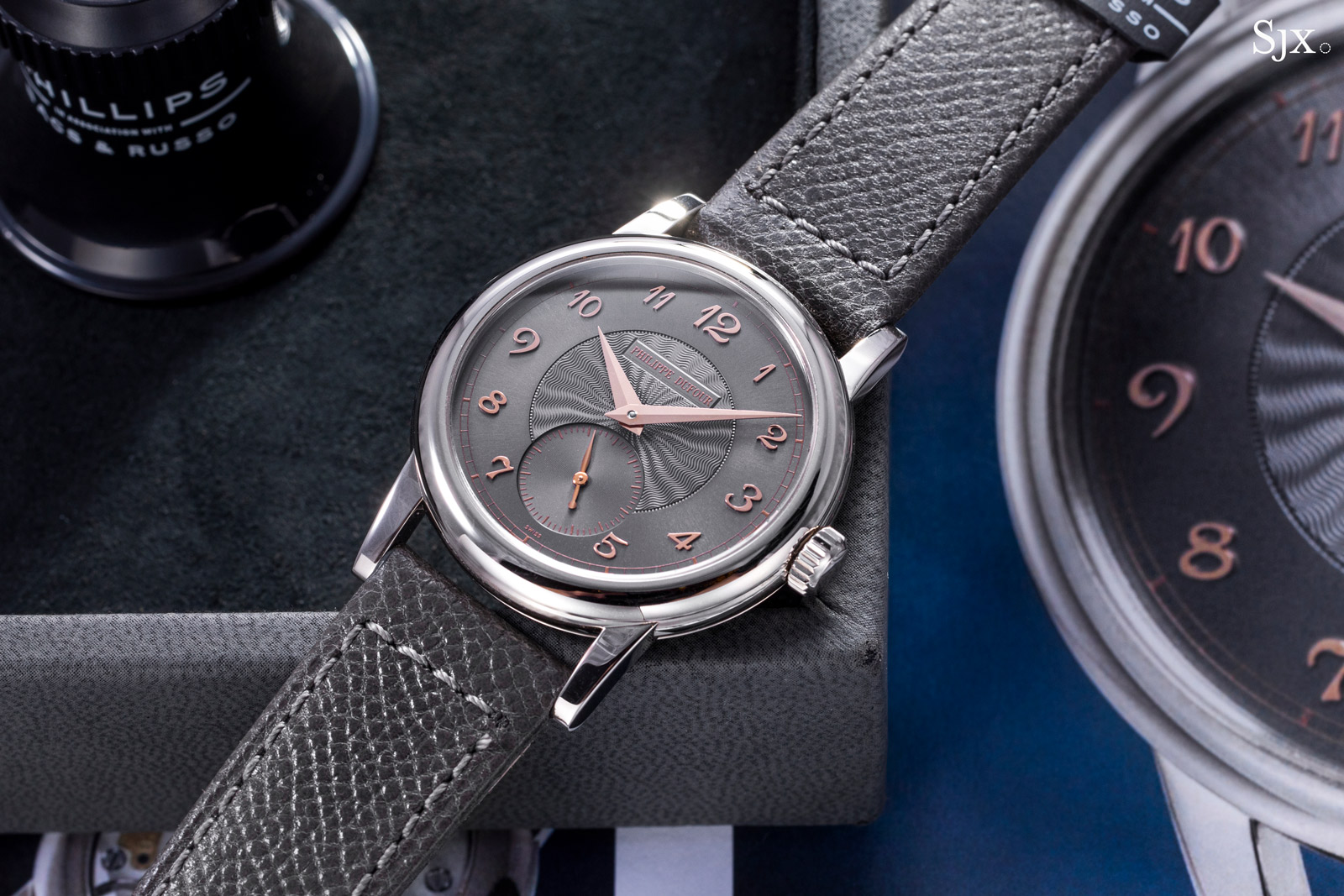 Another big-ticket time-only watch was the George Daniels Millennium wristwatch that sold for CHF828,600 at Phillips, almost double its recent value and 20% more than the Daniels Anniversary in the same sale.

This was one of the most mystifying results of the season for me as the Millennium is decidedly uninteresting technically since it’s essentially an ETA movement modified by Daniels. Unlike the Anniversary that was made by Roger W. Smith, the Millennium was the work of the late watchmaker’s own hands, though I am unsure if that justifies this sort of value.

The result might have been an after-effect of the George Daniels Spring Case wristwatch that sold the day before for CHF4.08 million, a huge number but short of some expectations. Though there were several bidders on the watch at the beginning, the bidding was restrained and past three million there were only two left standing, both phone bidders represented by Nathalie Monbaron and James Marks, of Phillips Geneva and London respectively.

Prior to the sale, I expected a result in the CHF3-4 million range, but several insiders who had in mind CHF5-8 million, which was not my opinion but within reason. If there is an explanation for that beyond the wider economy, it is probably because the Spring Case, while historically significant and technically interesting, is not that attractive in a tangible sense when on the wrist. 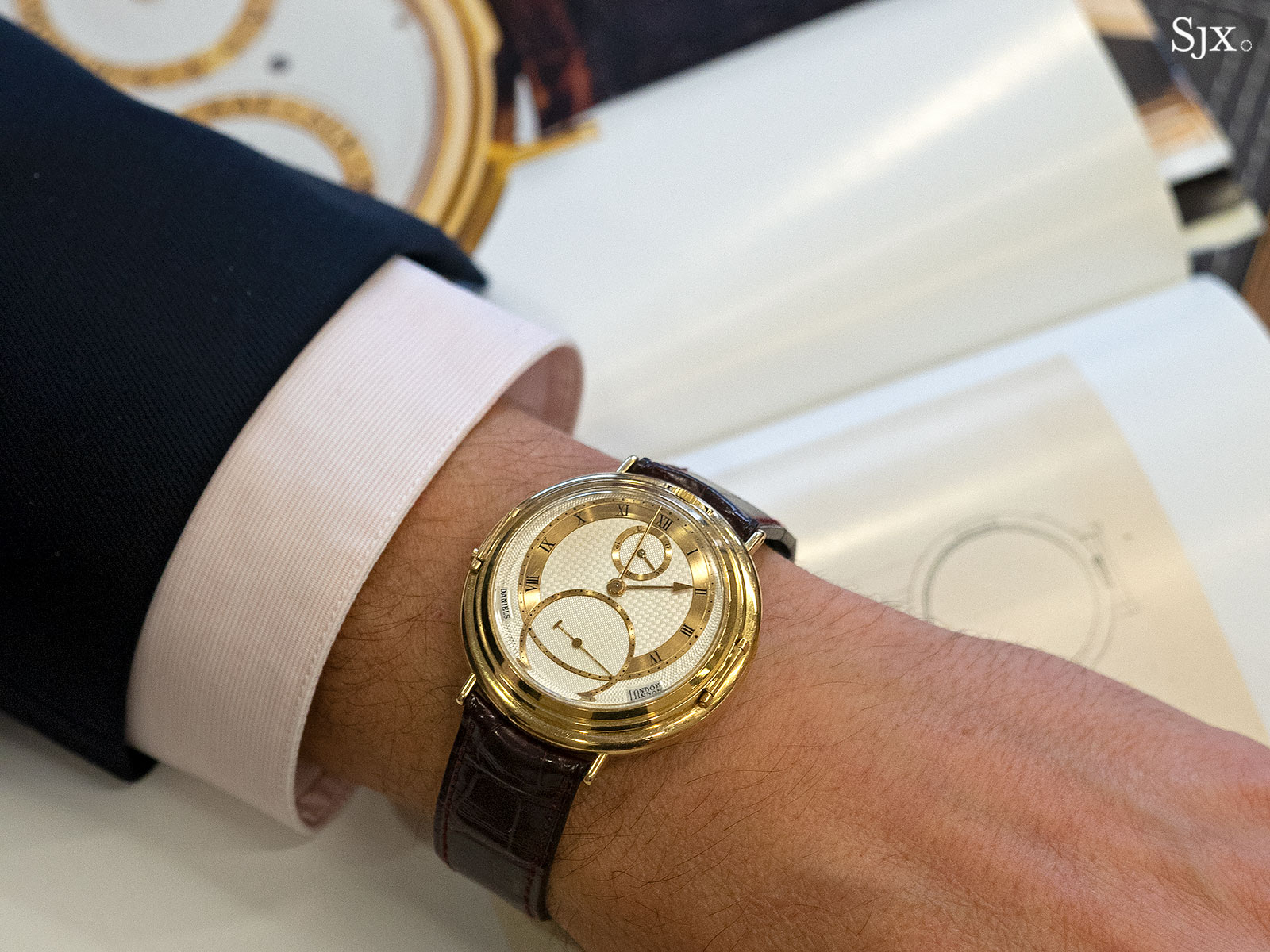 The Daniels Spring Case photographed in 2018

The increasing discernment of buyers was also apparent when it comes to watches from the biggest brands. Jewelled Rolex sports watches, for instance, seem to be trending downwards towards the retail price, but the Daytona “Rainbow”, arguably the most iconic jewelled Rolex sports model, still sells for many multiples of its retial price.

And that is also true at the other end of the spectrum when comparing niche independent brands. Take for instance the prototypes from De Bethune, Vianney Halter, and Gronefeld at Phillips, which sold for between CHF150,000-250,000. The values were solid and respectable, but still several ticks below the values of comparable – but regular production – watches from F.P. Journe that are already off their highs.

As an aside, it was the same two bidders duelling each other for both De Bethune prototypes, represented respectively by Paul Boutros and Isabella Proia, both of Phillips’ New York office. 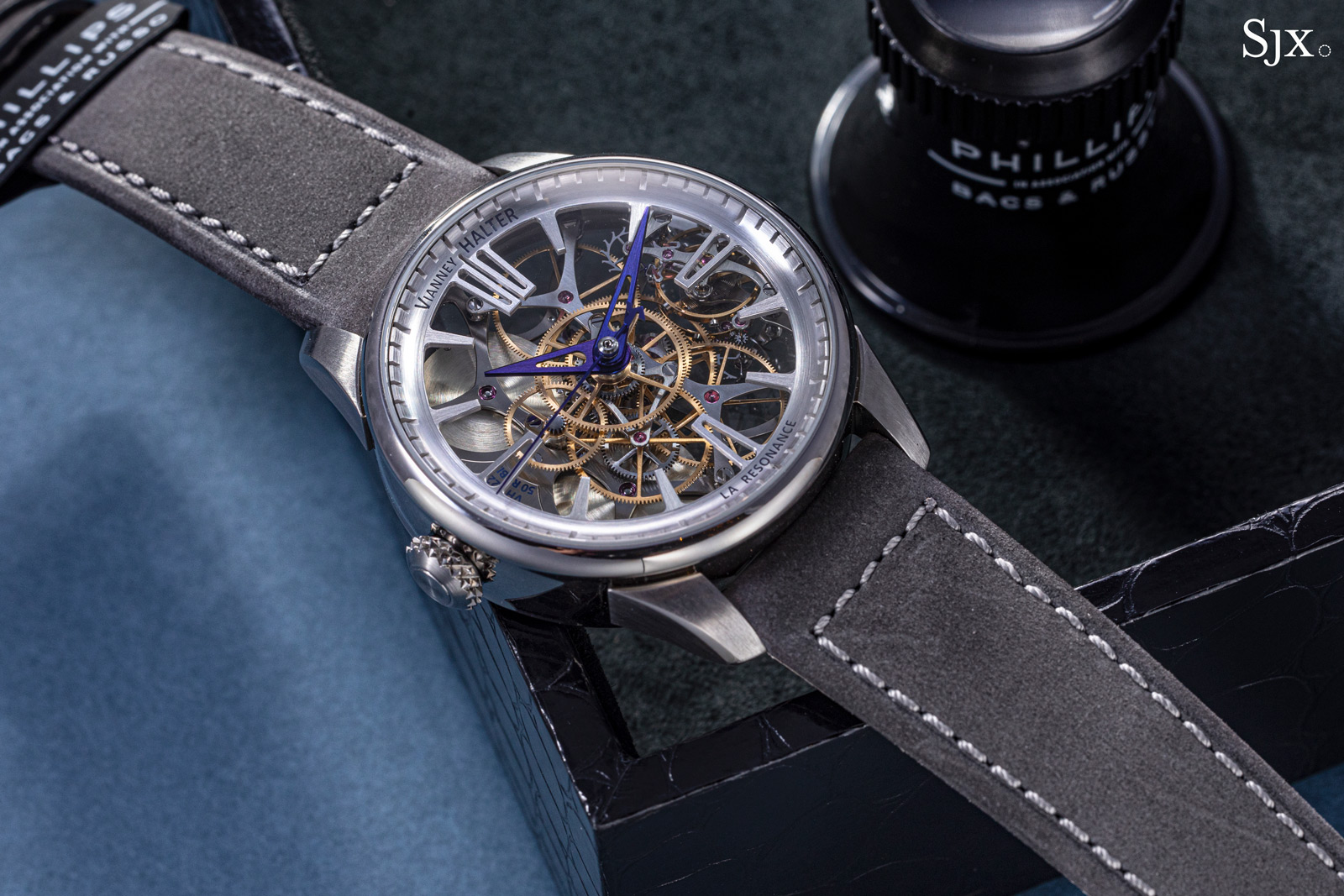 The highest profile event during the season was likely the sale of Jean Todt’s collection at Christie’s, an event that collected CHF31.9 million including fees. The manager of Ferrari’s Formula 1 team during Michael Schumacher’s stellar run in the early 2000s, Mr Todt has long been known as a friend of both Richard Mille and F.P. Journe.

Both brands were amply represented in the sale and accounted for most of the top quarter of lots sold in terms of value. But within the high prices achieved were several interesting observations. 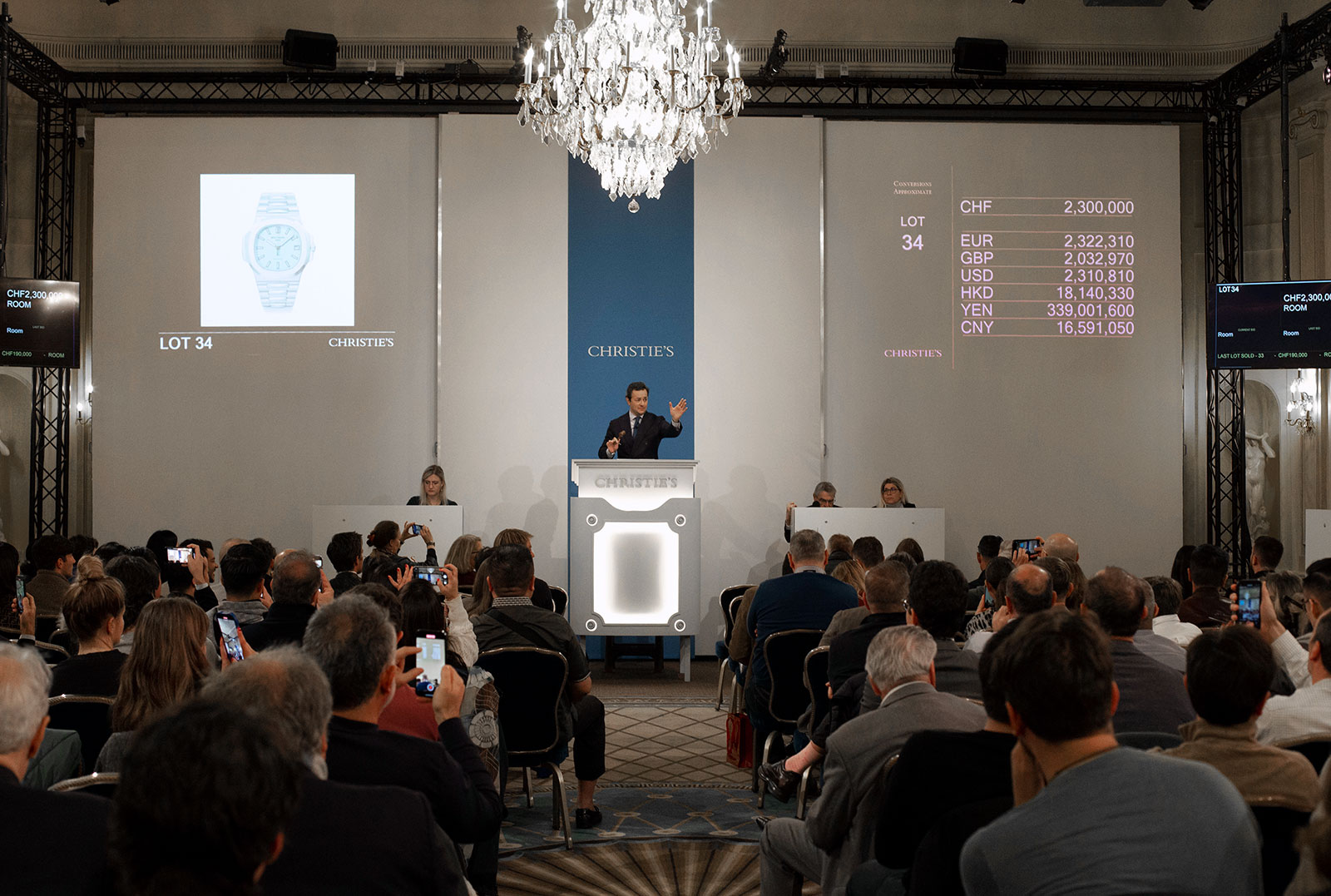 The Christie’s sale room in the Four Season. Image – Christie’s

The most valuable watch in Mr Todt’s collection was the prototype Richard Mille RM 56-01 that sold for CHF3.65 million. While big, that number is almost half as much as the peak values of one-off sapphire Richard Mille watches. In comparison, it seems not so much after all, despite being more important considering its status as the prototype for all others that came after it. This perhaps reflects the wider decline in the values of “hype” watches.

Notably, two other Richard Mille prototypes owned by Mr Todt, the RM027 and RM001, were bought by a representative of Watchbox for CHF1.11 million and CHF2.09 million respectively. The pair of watches could have been for a client or it might imply that Watchbox, one of the world’s largest secondary-market dealers, wants to grow its Richard Mille business, a sure way of boosting the top line given the high average price for the brand. 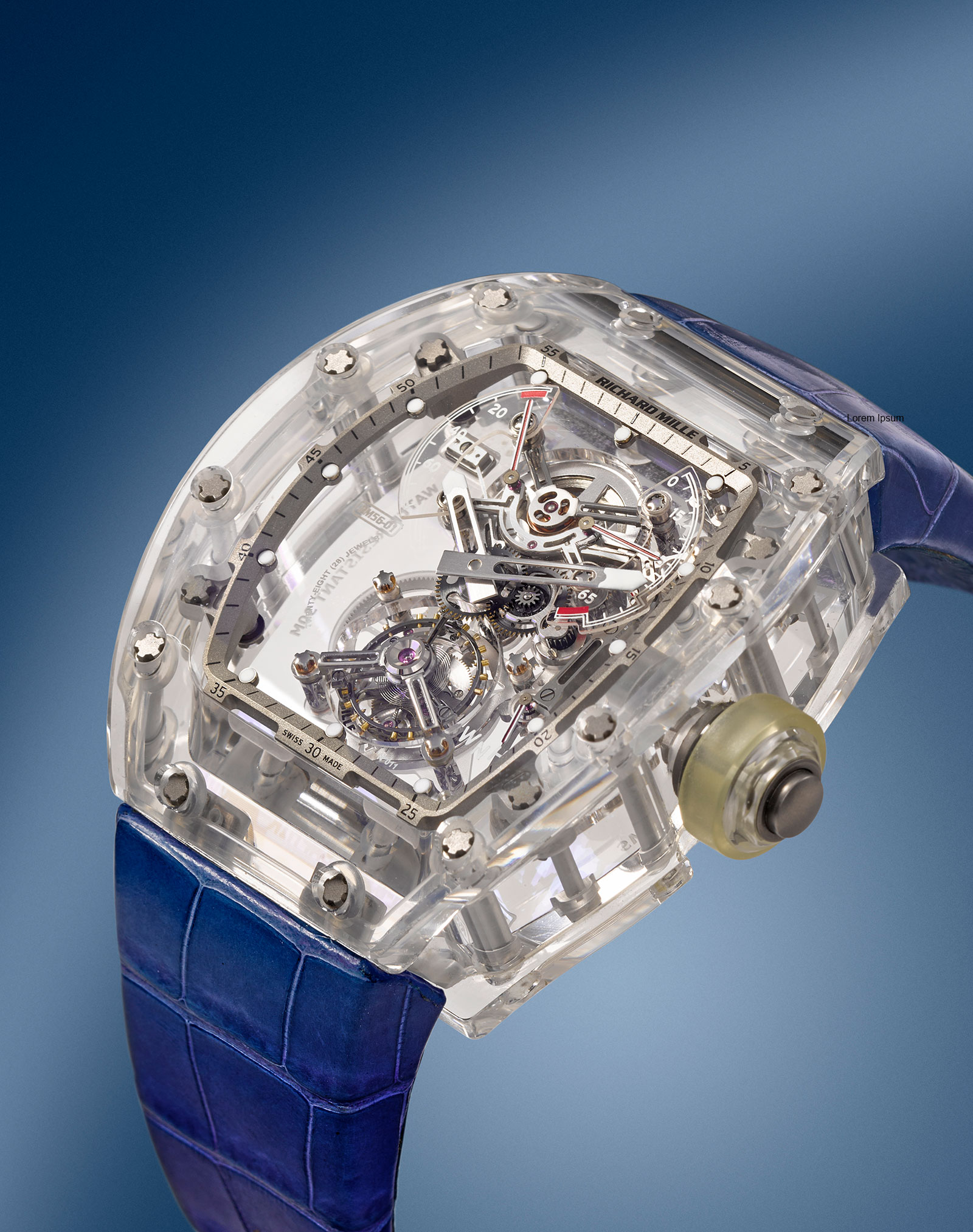 All the Richard Mille and F.P. Journe watches – basically the most valuable watches in the Jean Todt collection – did not sell for too far off market value, indicating his fame arguably matters less than the watches themselves, most of which were unique or prototypes.

But the watches with clear Michael Schumacher provenance mostly did sell for more than expected all things being equal, reflecting the Formula 1 driver’s enduring stardom. One such example was the Rolex Daytona ref. 16519 engraved with “From Michael with Thanks” on the back that sold for CHF69,300, almost double its market value.

In contrast, the low-value watches in Mr Todt’s collection sold for multiples of their market value. Many of the Girard-Perregaux Ferrari watches, for instance, sold for three to five times the price on Chrono24. This was perhaps souvenir hunters wanting a piece of Ferrari memorabilia.

Another seven-figure result at Phillips was for the Lange 1815 Chronograph “Hampton Court Edition”, a unique version of the watch being sold to benefit a UK charity. This went to a determined room bidder who, according to people in the know, spent eight figures during the season. 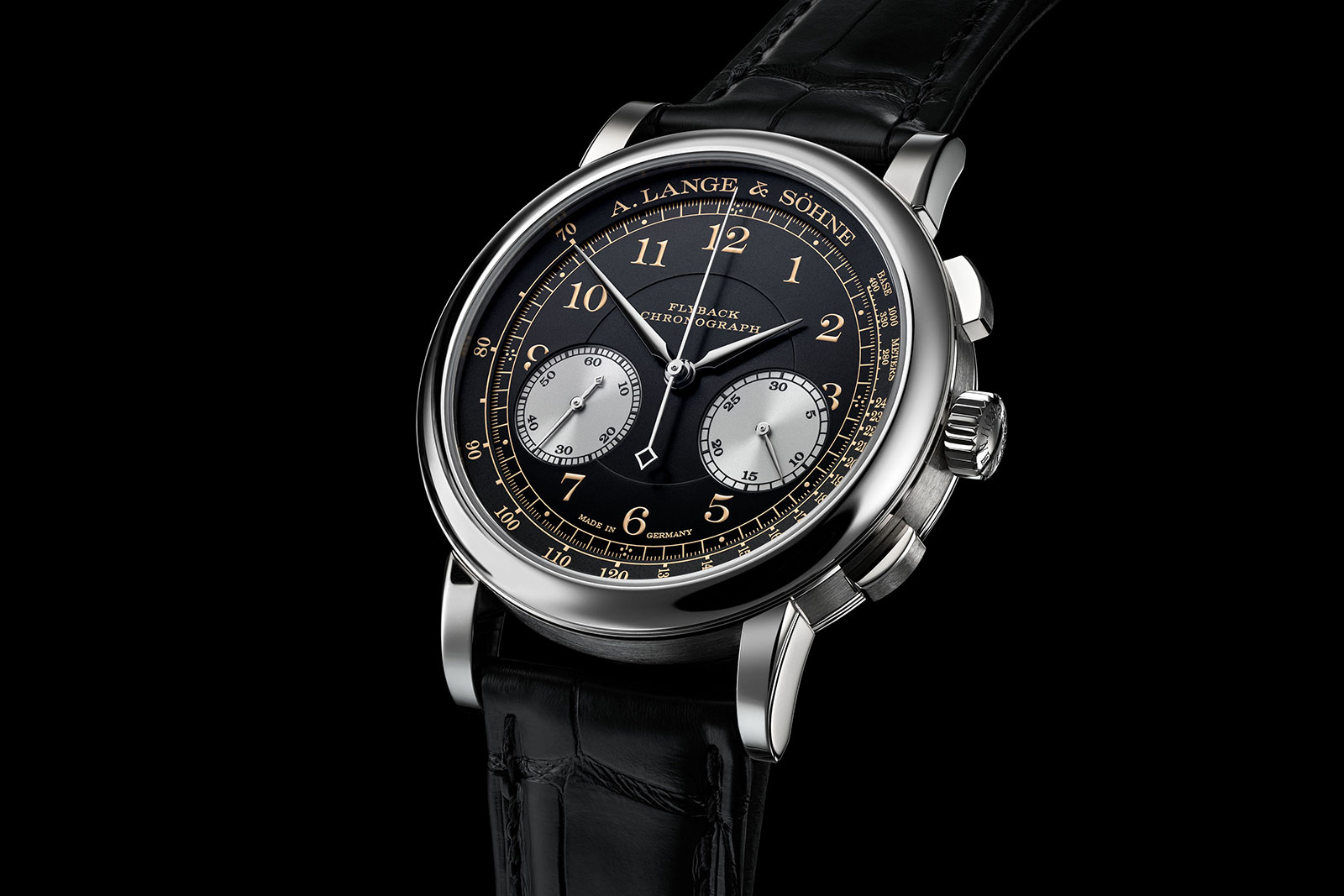 The buyer of the unique 1815, a gentleman from the Near East, was one of three bidders (the other two from Asia) present at all the sales who either won or were underbidders on many of the headline lots. 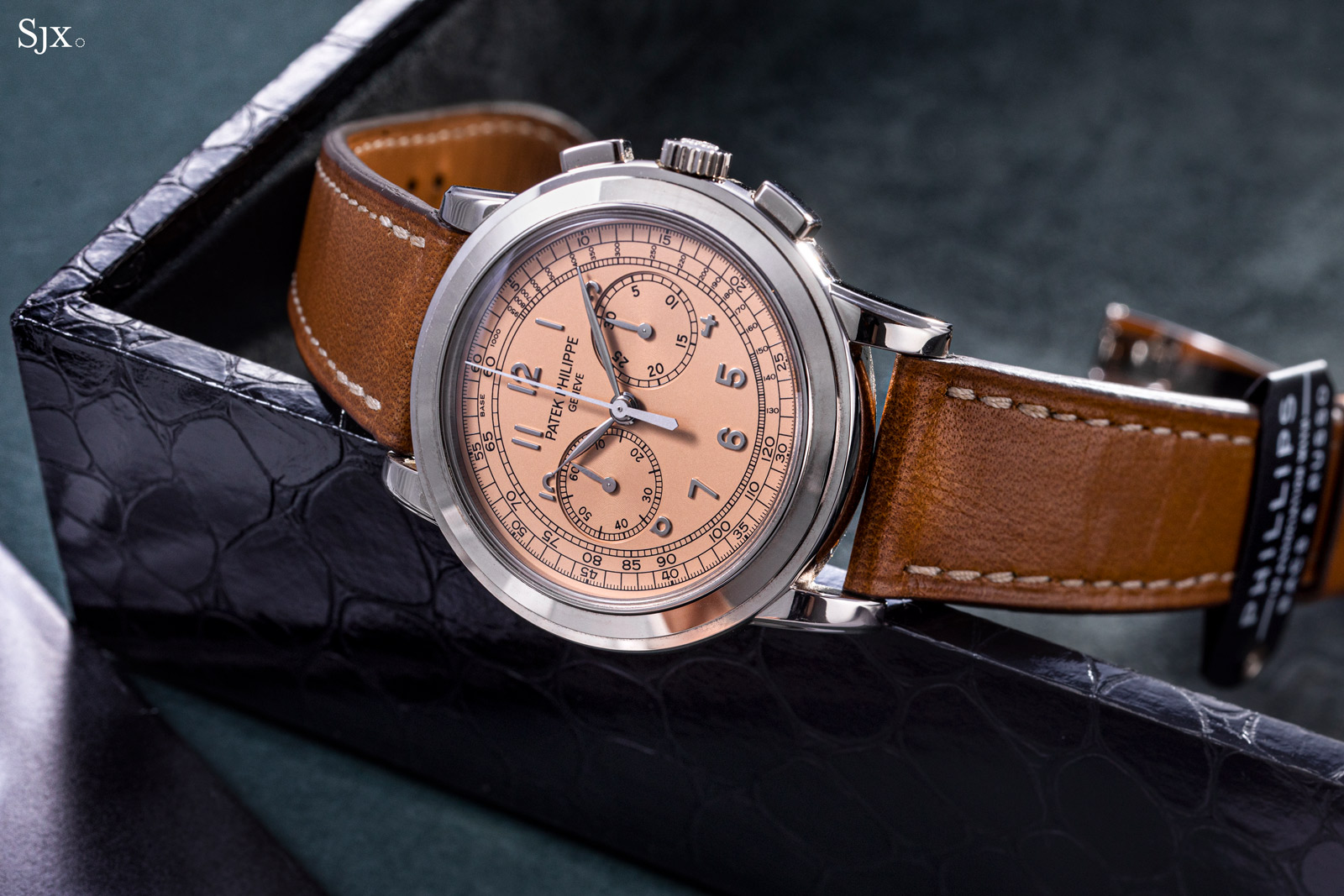 And at Phillips the gentleman who bought the one-off 1815 also won the Patek Philippe ref. 5070G with a “salmon” dial for CHF852,800, making it the most valuable example of that reference by a wide, wide margin.

In other words, this trio of buyers propelled almost all the big ticket lots to seven figures. Without any one of them, the results would have been very different, as is often the case in watch auctions, illustrating the fact that the thin air at the top narrows the audience substantially.

And that was also demonstrated by two consecutive lots at Phillips, each an Oyster Perpetual worn by members of two different Swiss expeditions to scale Mount Everest in 1952. Neither is particularly interesting intrinsically, but both sold for substantial sums that were multiples of what ordinary examples of each would go for. The value was no doubt due to the mountaineering provenance, but also because of a determined bidder – both went to a lady from the heritage department at Rolex.