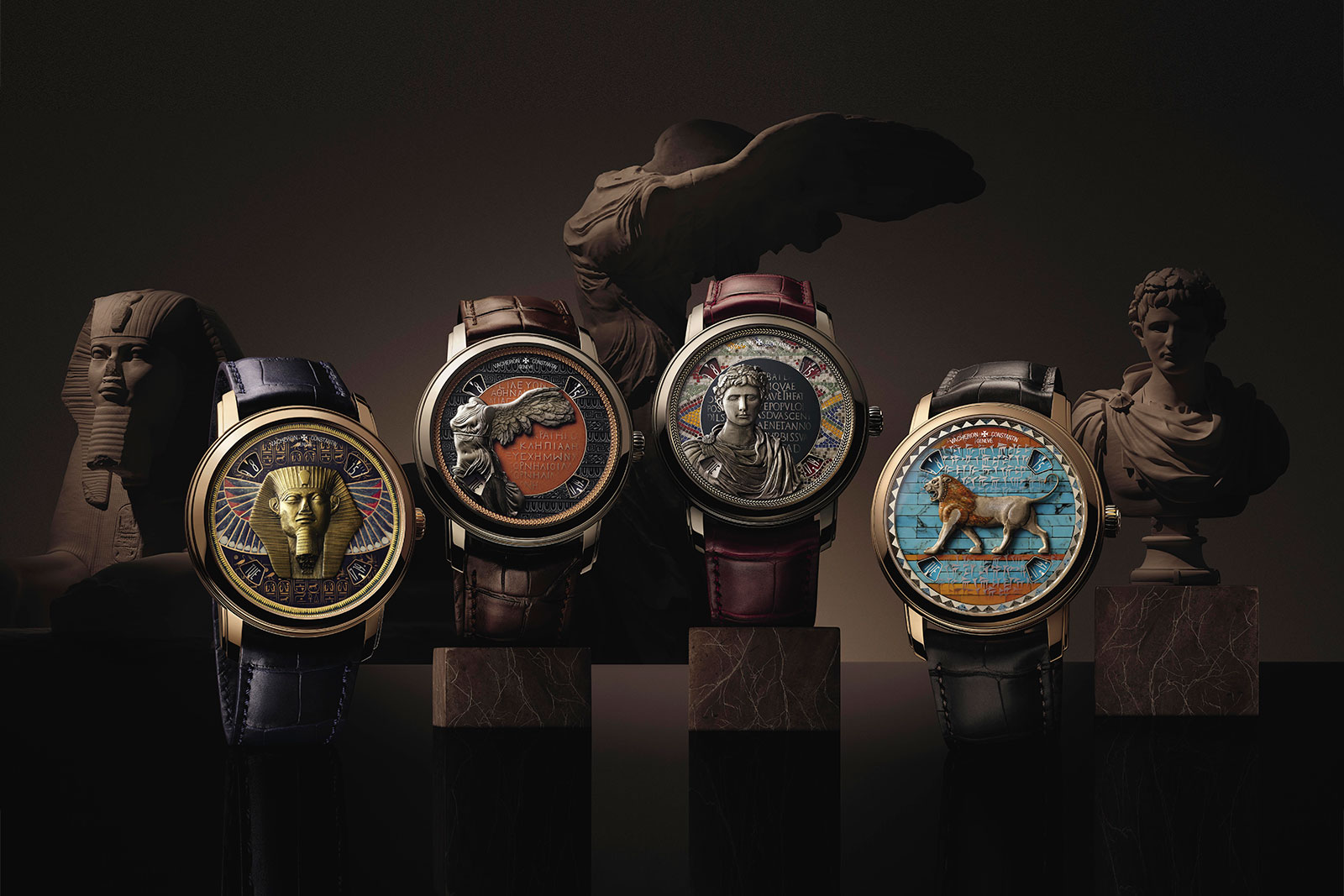 Announced in 2019, Vacheron Constantin’s partnership with the Louvre has given birth to the Métiers d’Art Tribute to Great Civilisations, a quartet of watches featuring artisanal, micro-sculptures in a nod to bygone empires.

Each of the four watches bears on its face a scaled-down reproduction of an artefact in the Louvre – the Great Sphinx of Tanis, the lion relief from Palace of Darius I at Susa, the Winged Victory of Samothrace, and the bust of Caesar Augustus. These objects have each been reproduced with creativity and artistry to create dials that live up to the métiers d’art label. 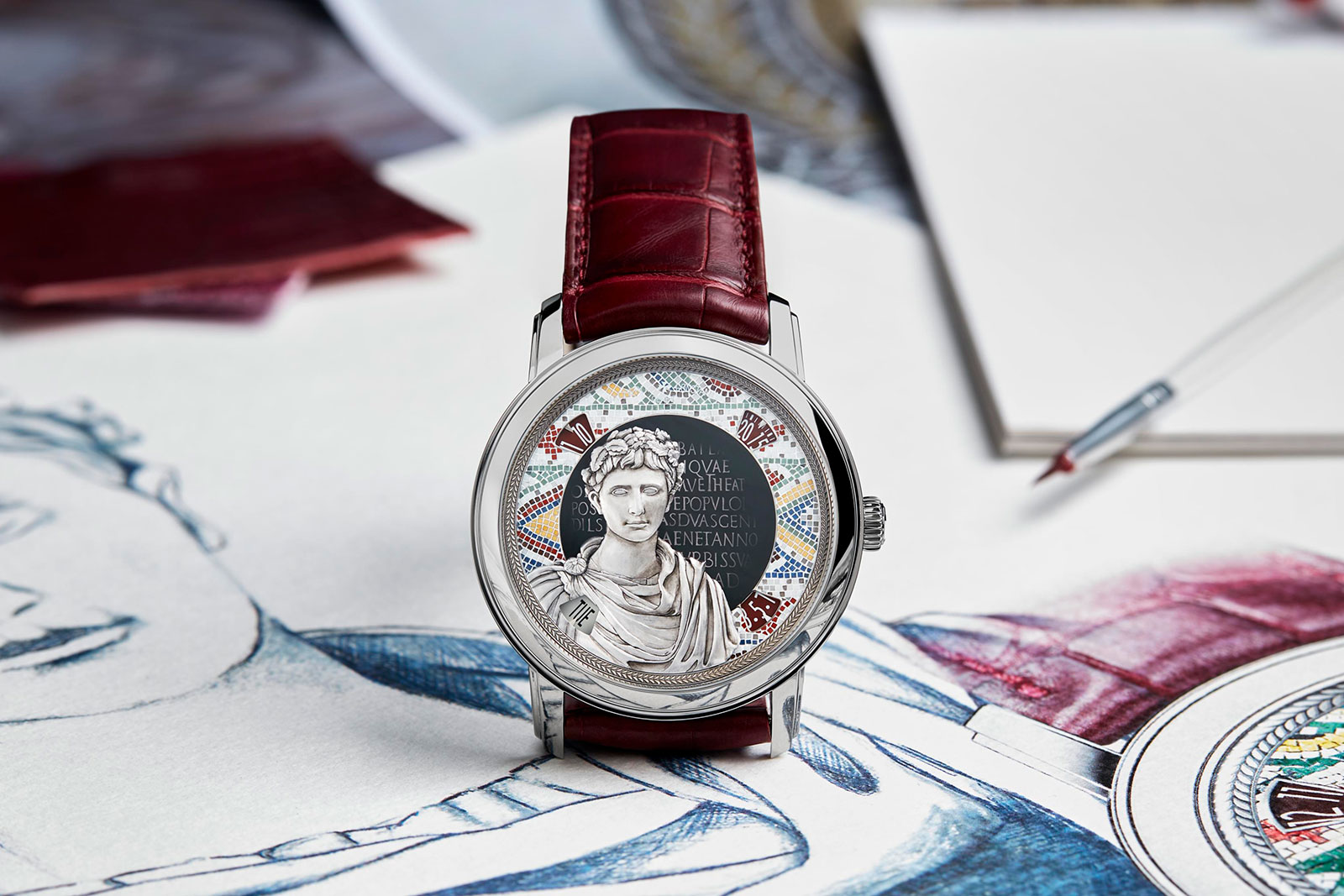 The dials are comprised of several layers and sections, in turn decorated with a variety of artisanal techniques ranging from enamelling to mosaic, in order to create the depth and detail they possess. Importantly, the result is greater than the sum of the parts – the dials are attractive in form and impressive in detail. 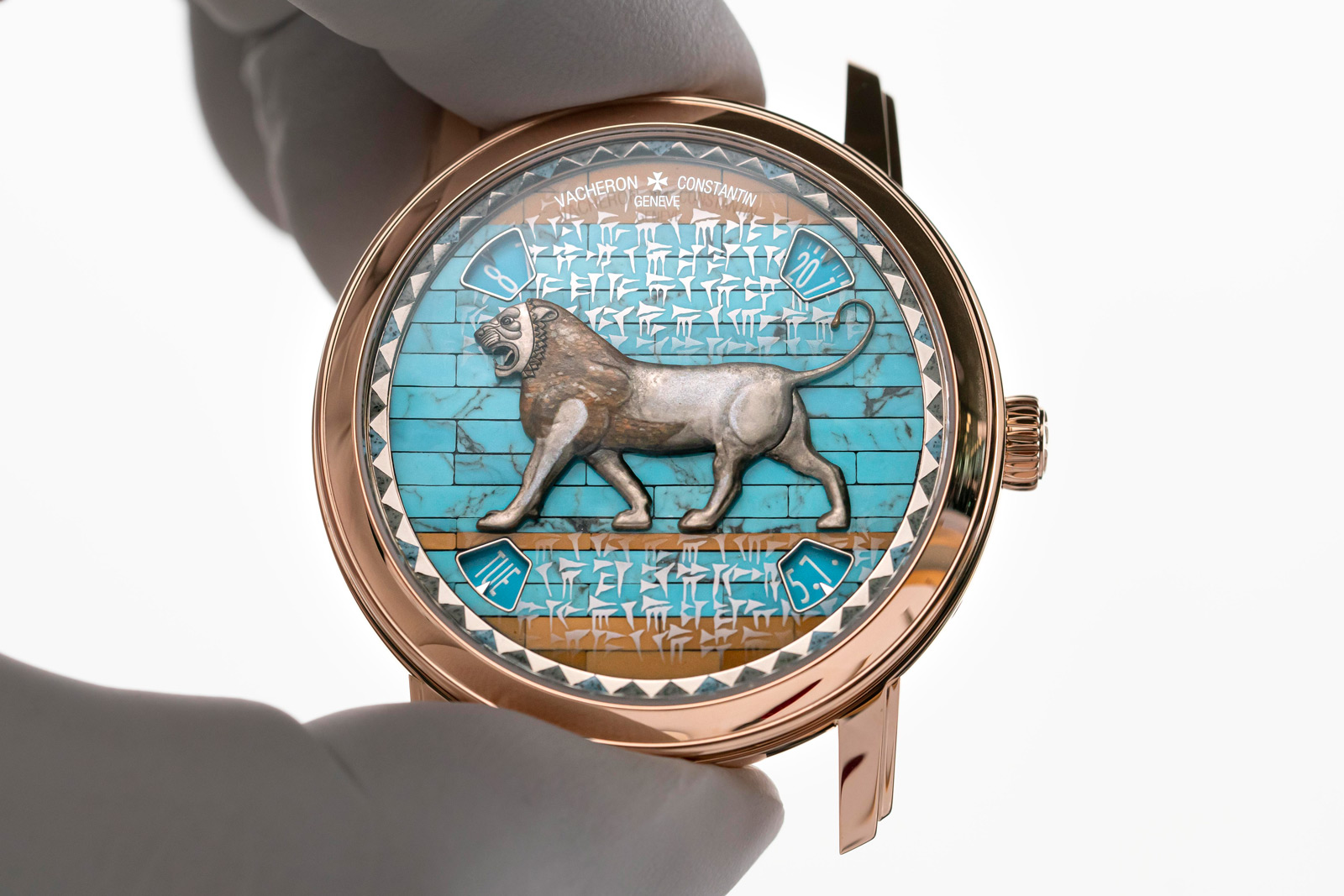 Though all four watches are exceptional examples of Vacheron Constantin’s metier, the Grand sphinx du Tanis and Lion de Darius certainly stand out over the other two, just because of their more striking palette. The Buste d’Auguste and Victoire de Samothrace feel muted in comparison. 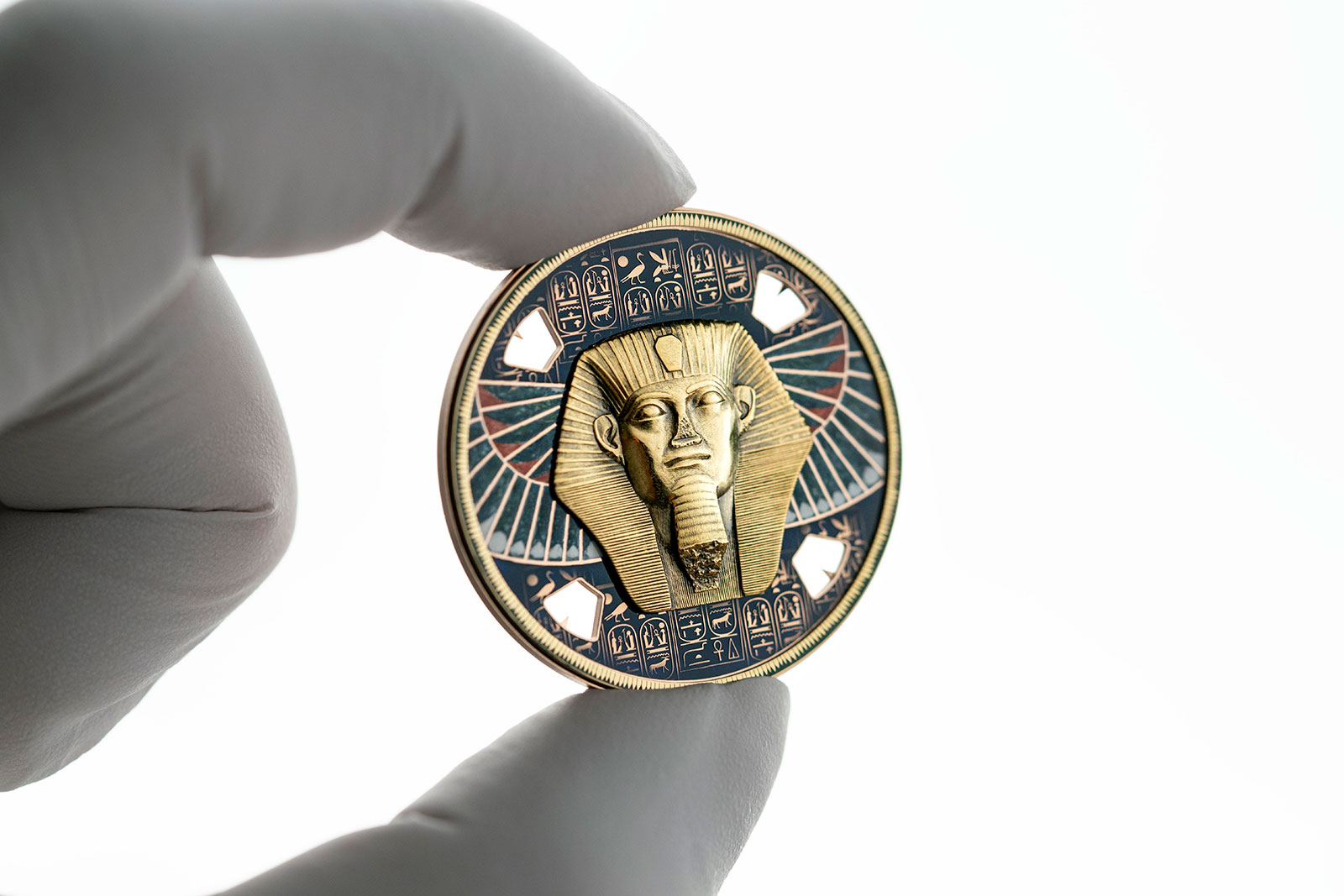 The dial of the Grand sphinx de Tanis

While the cultural and historic inspirations behind each of them will not resonate universally, the watches are intrinsically appealing for their craft and aesthetics. They do justice to the objects in the Louvre, especially considering the scale of the objects themselves – the Sphinx is the size of a room – relative to the size of a wristwatch.

But as impressive as the watches themselves is the obvious effort that went into their creation. Each of the watches incorporates a surprising numbers of historical references – a pattern from a vase for the frieze here, a paragraph from a speech given two millennia ago there – so much so that the degree of collaboration between Vacheron Constantin’s creative team and the Louvre must have been all encompassing. This is a collaboration in every sense of the word. 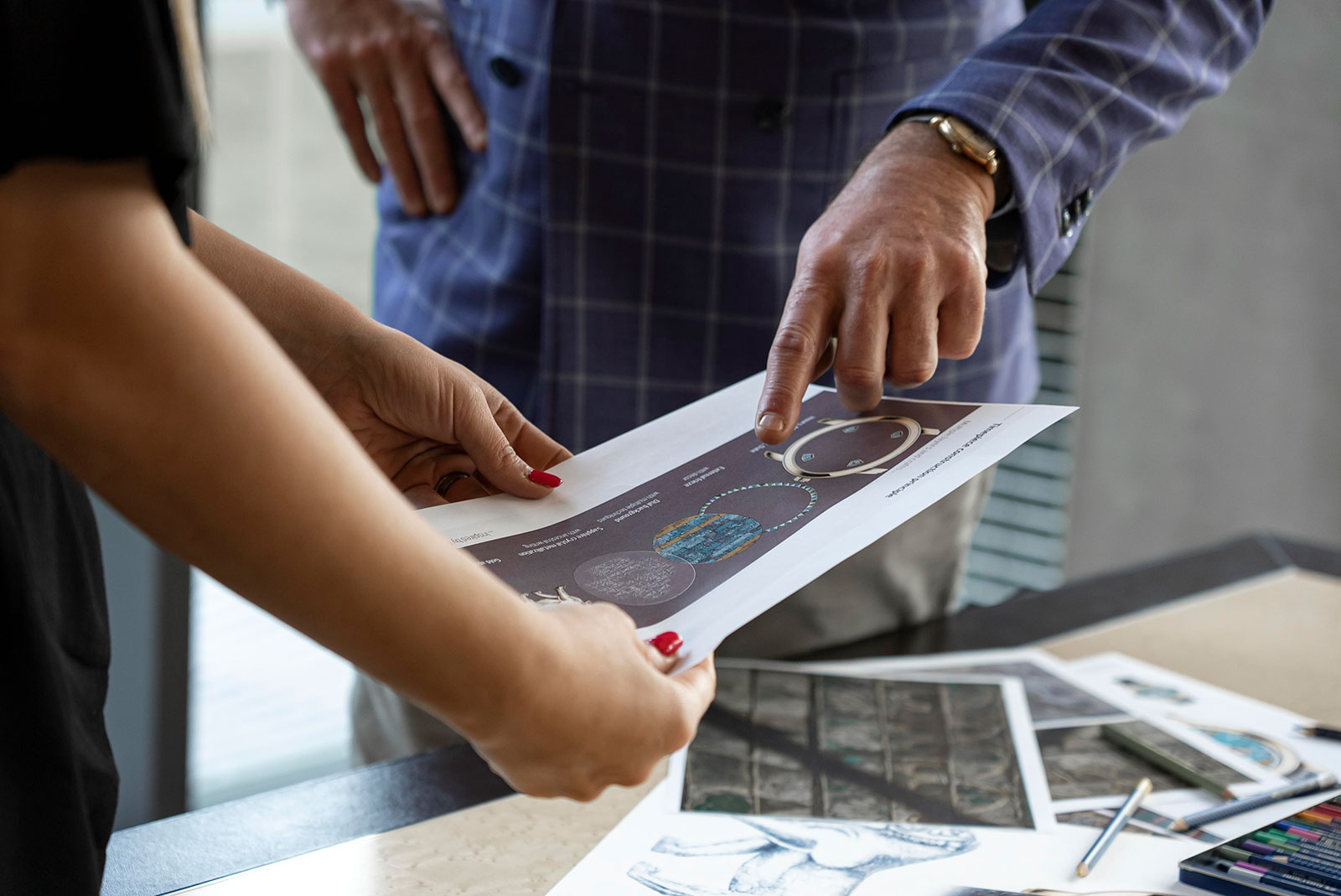 Despite the incredible diversity of the dials, they all share the same usual construction made up of a dial base, a decorative frieze around the base, a smoked and engraved sapphire disc on the base, and finally the miniature sculpture on top of the sapphire. 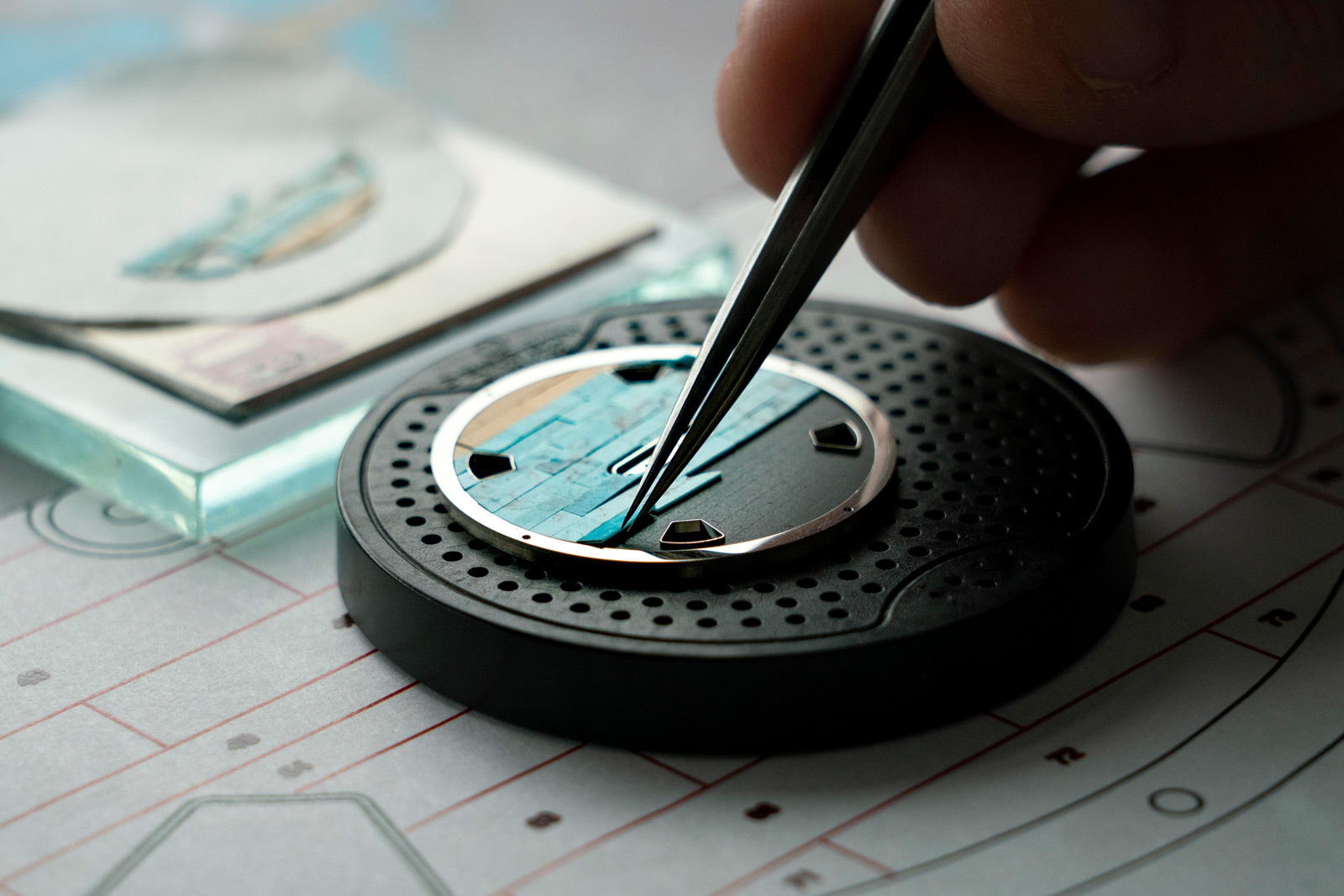 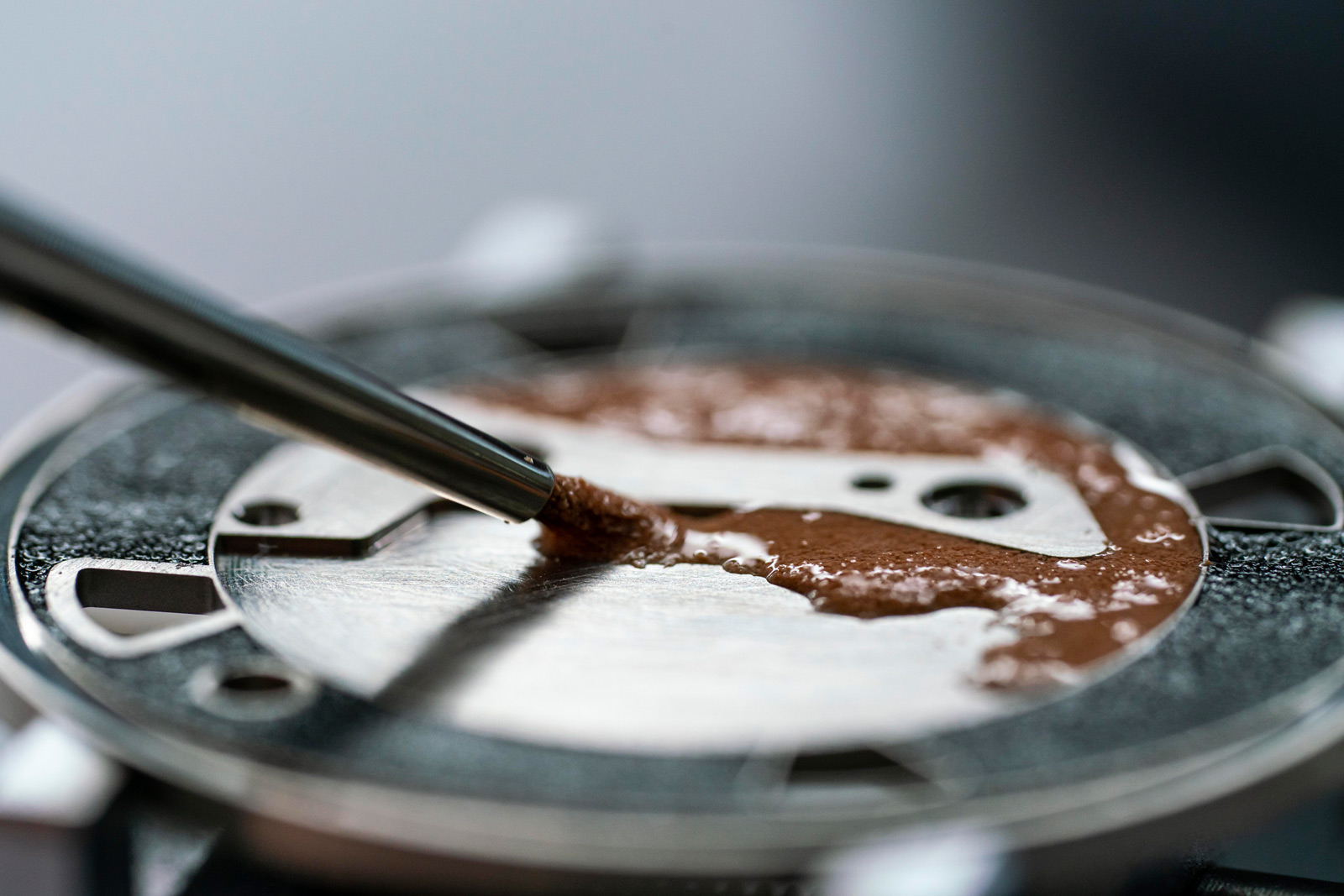 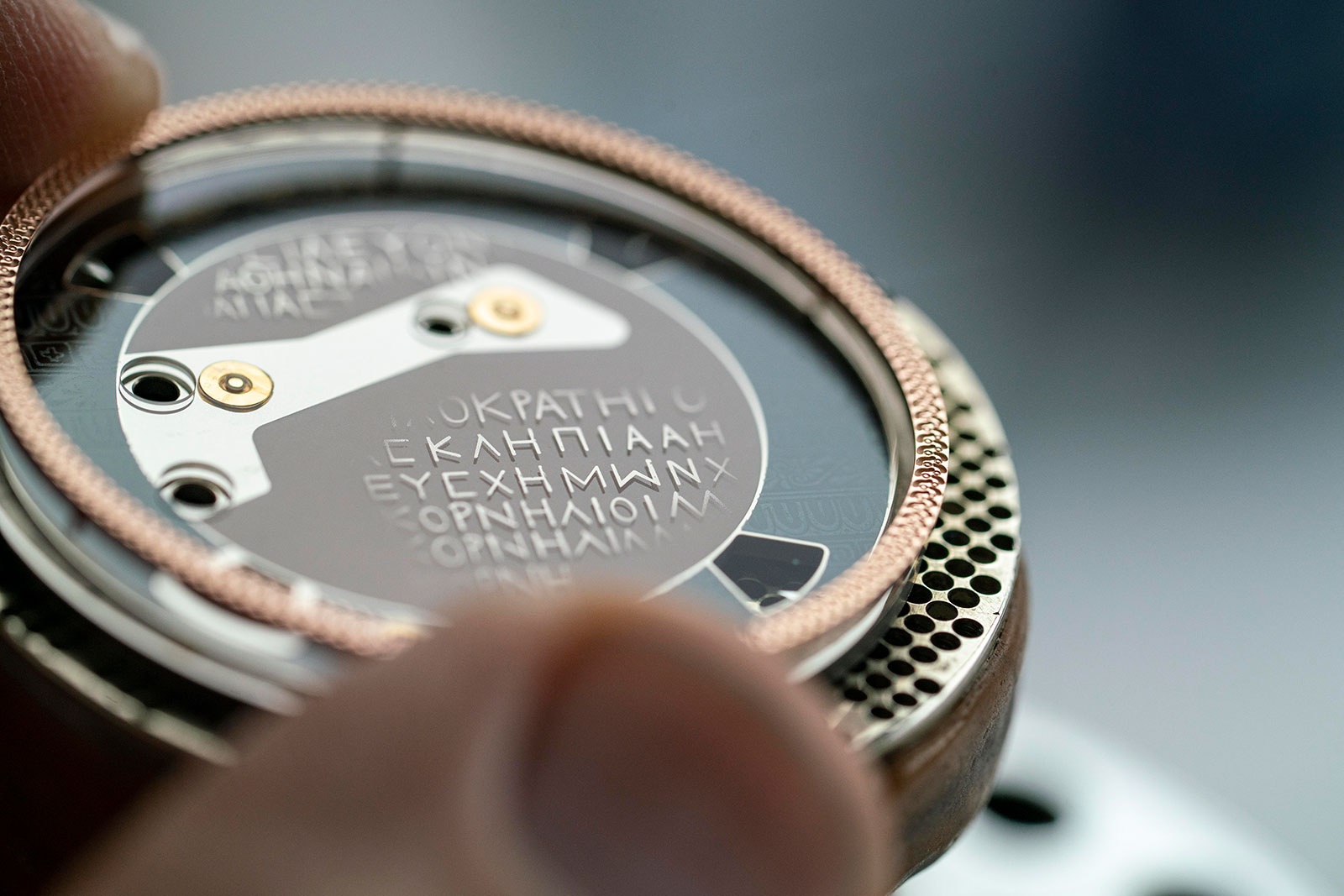 Installing the frieze on the dial of Victoire de Samothrace 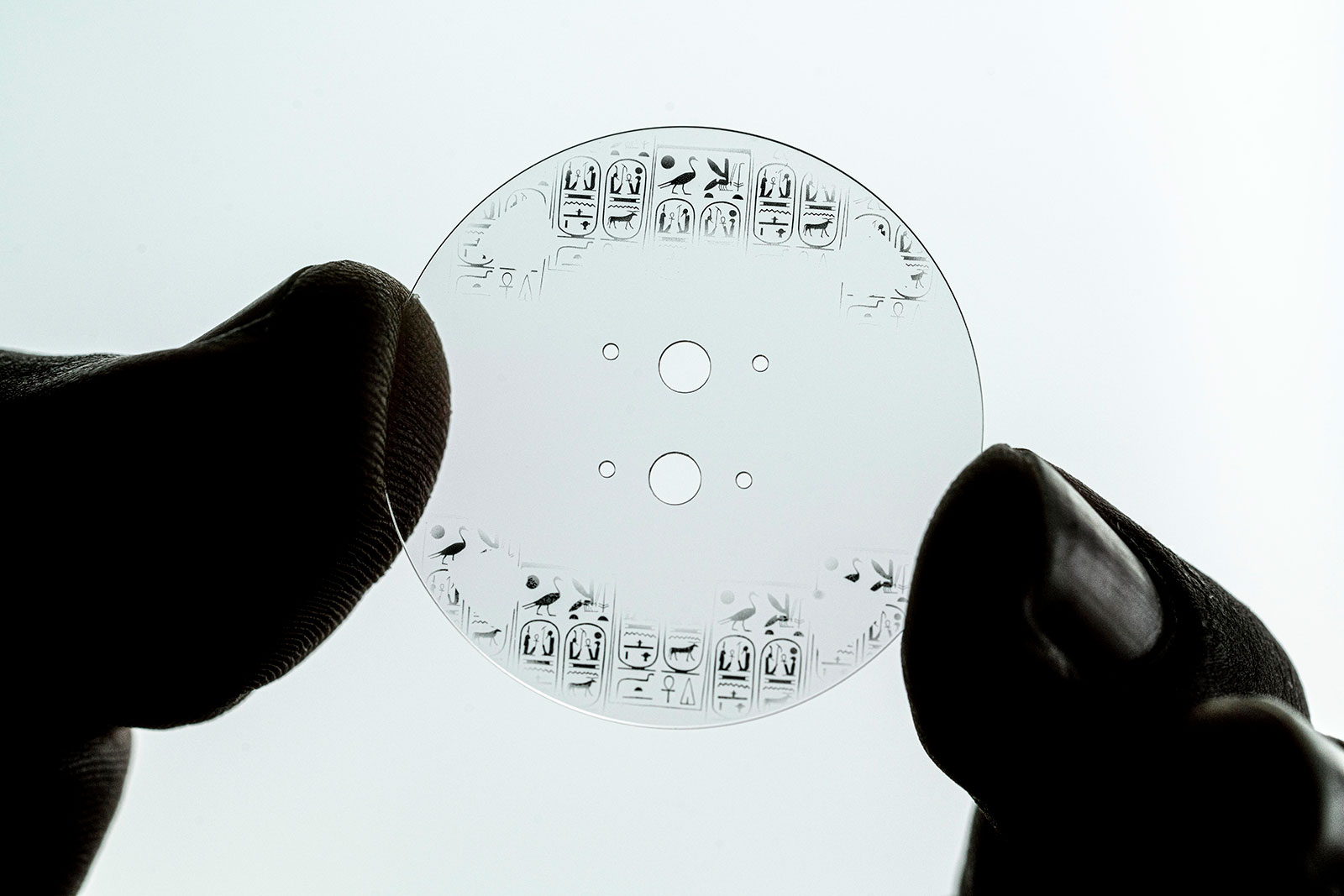 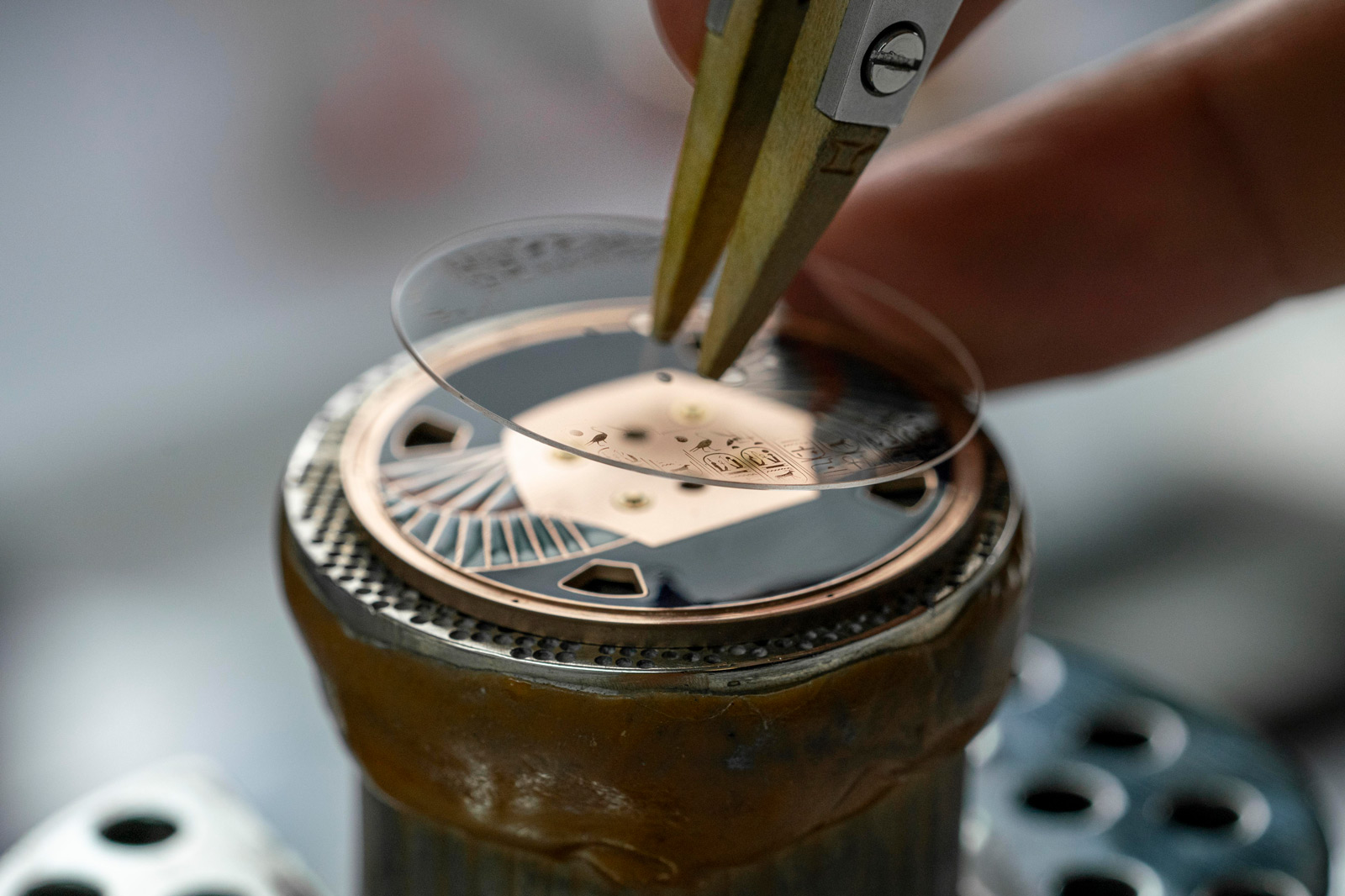 The clear sapphire disc is metallised with historical script; in the case of Grand sphinx du Tanis, it features Egyptian hieroglyphs from the cartouche of the pharaoh Menenptah 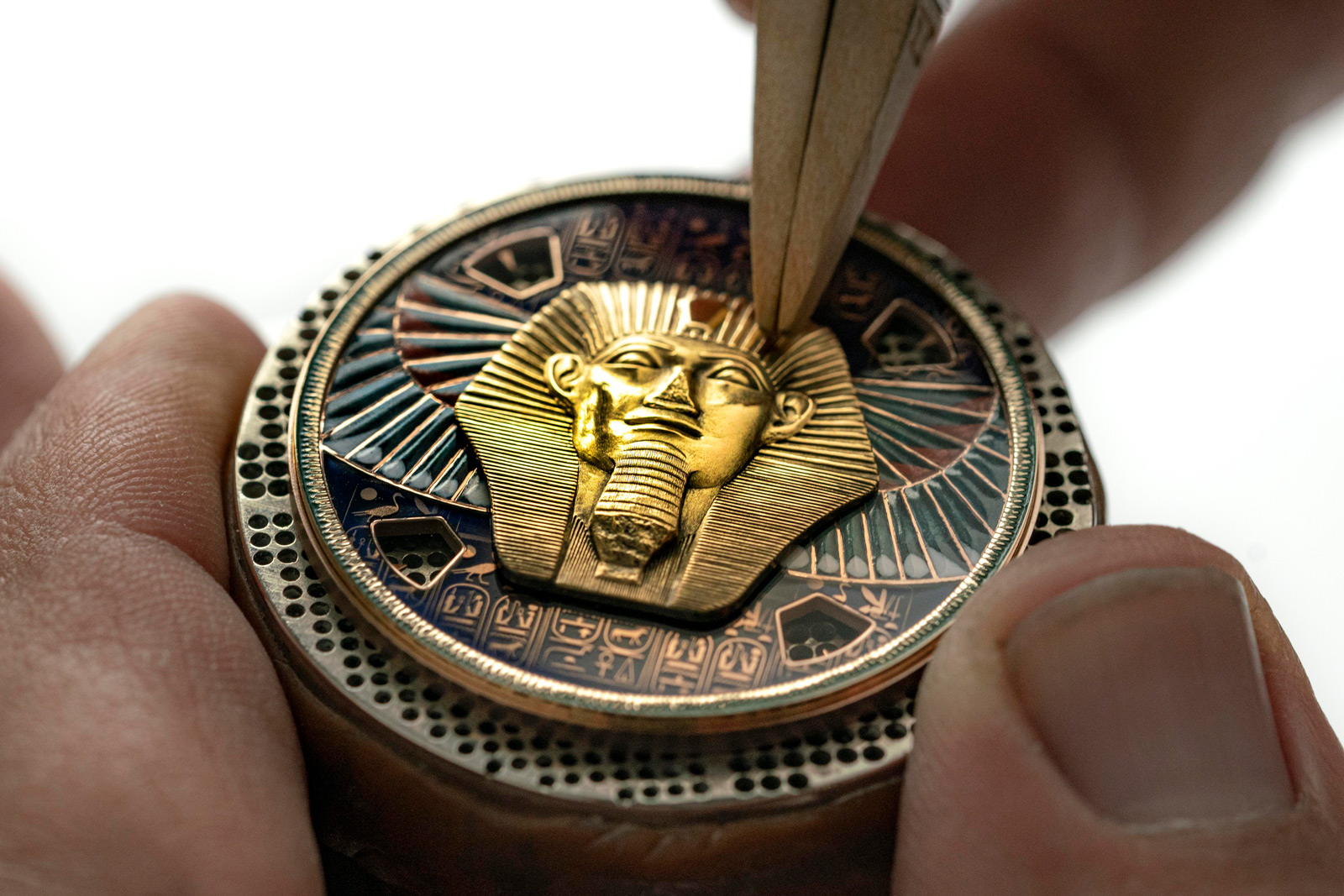 The sphinx is set in place 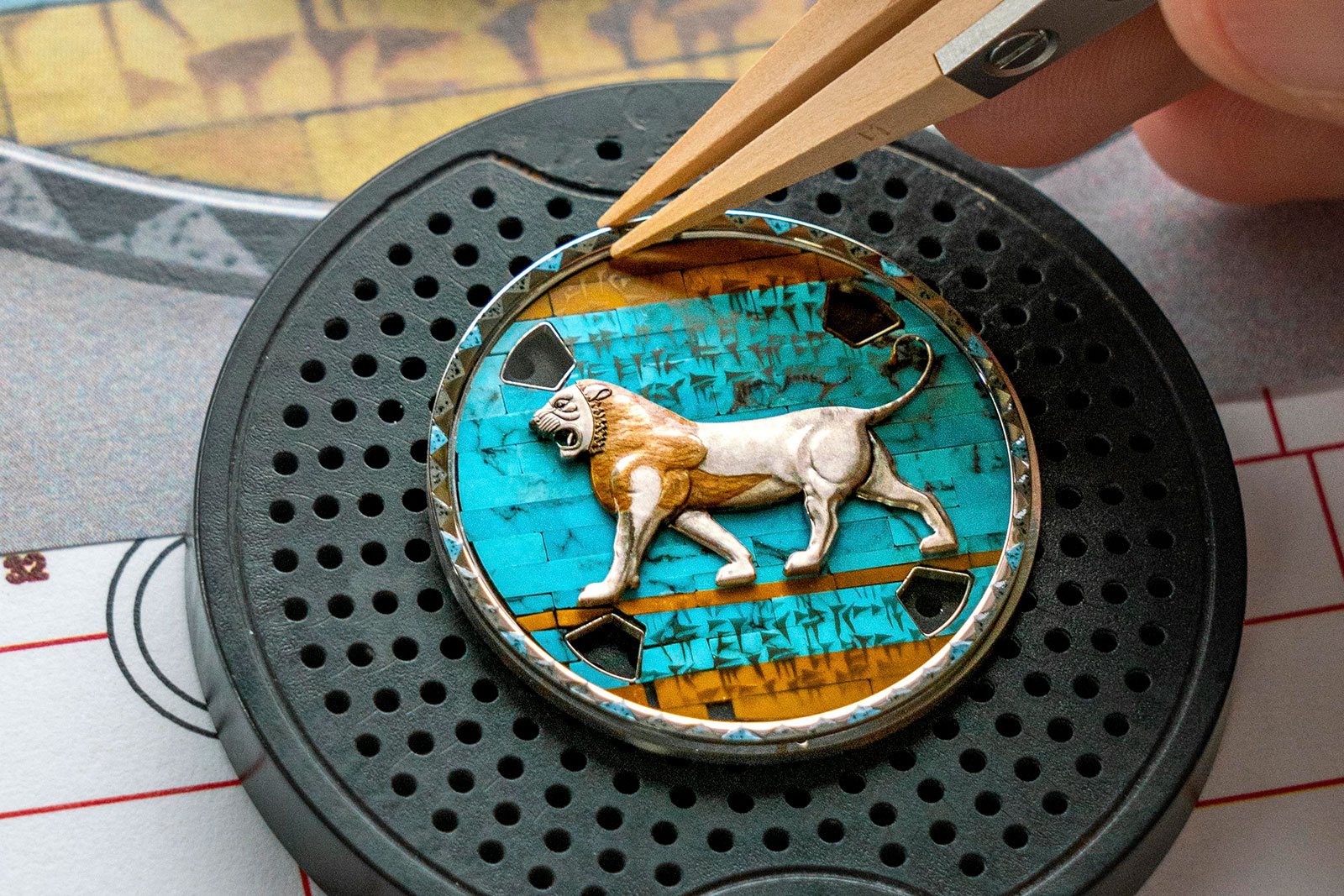 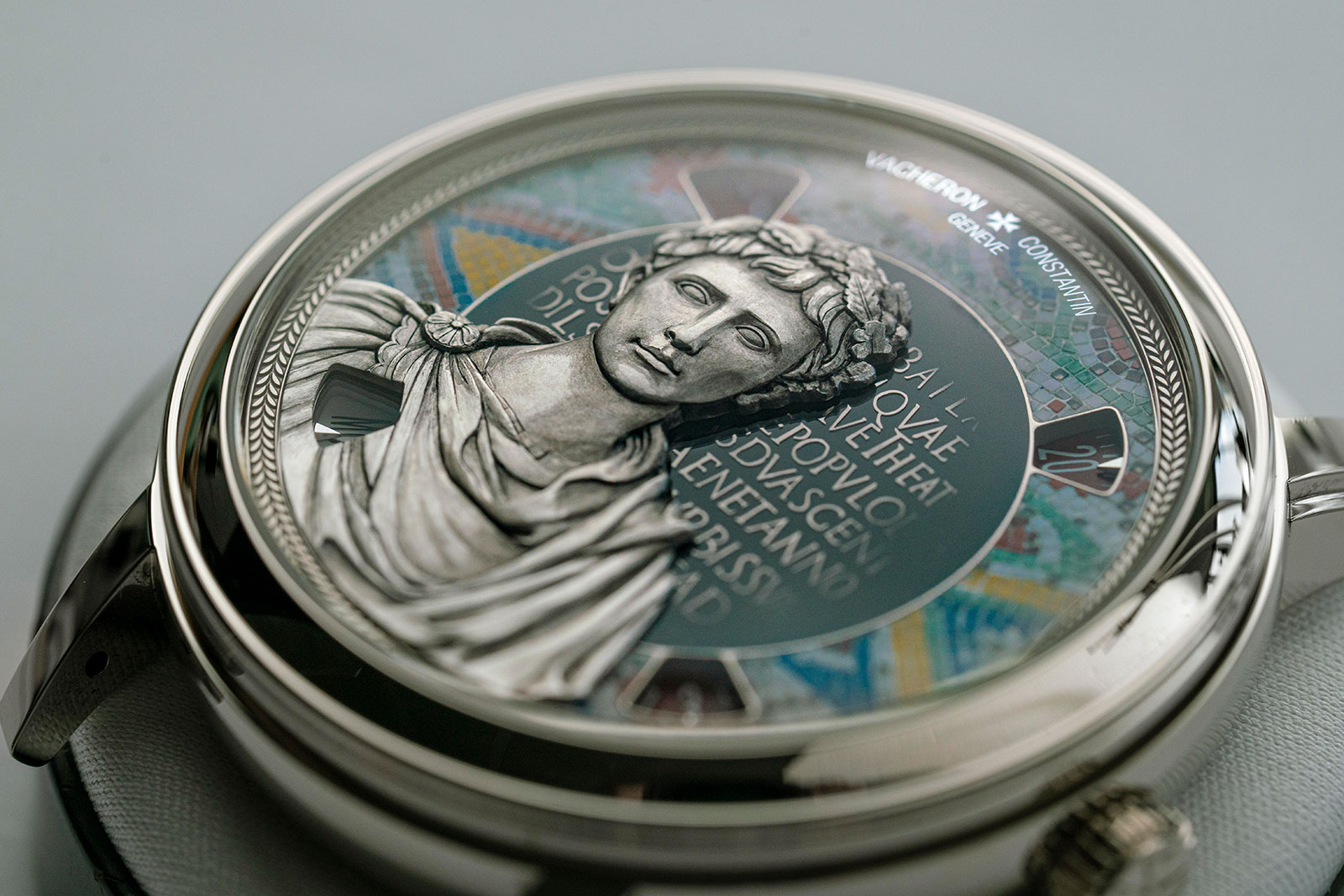 The result is a three-dimension appearance with the sculpture seemingly positioned at a distance from the dial base, although everything is contained with the millimetres available under the crystal

Mechanically the four watches are identical. They are powered by the cal. 2460 G4/2, a variant of the brand’s in-house movement developed specifically for Metiers d’Art watches.

Additional gearing under the dial splits the time and calendar display into four discs that can be read through four windows at each corner of the dial. This leaves most of the dial empty and a perfect canvas for decoration. 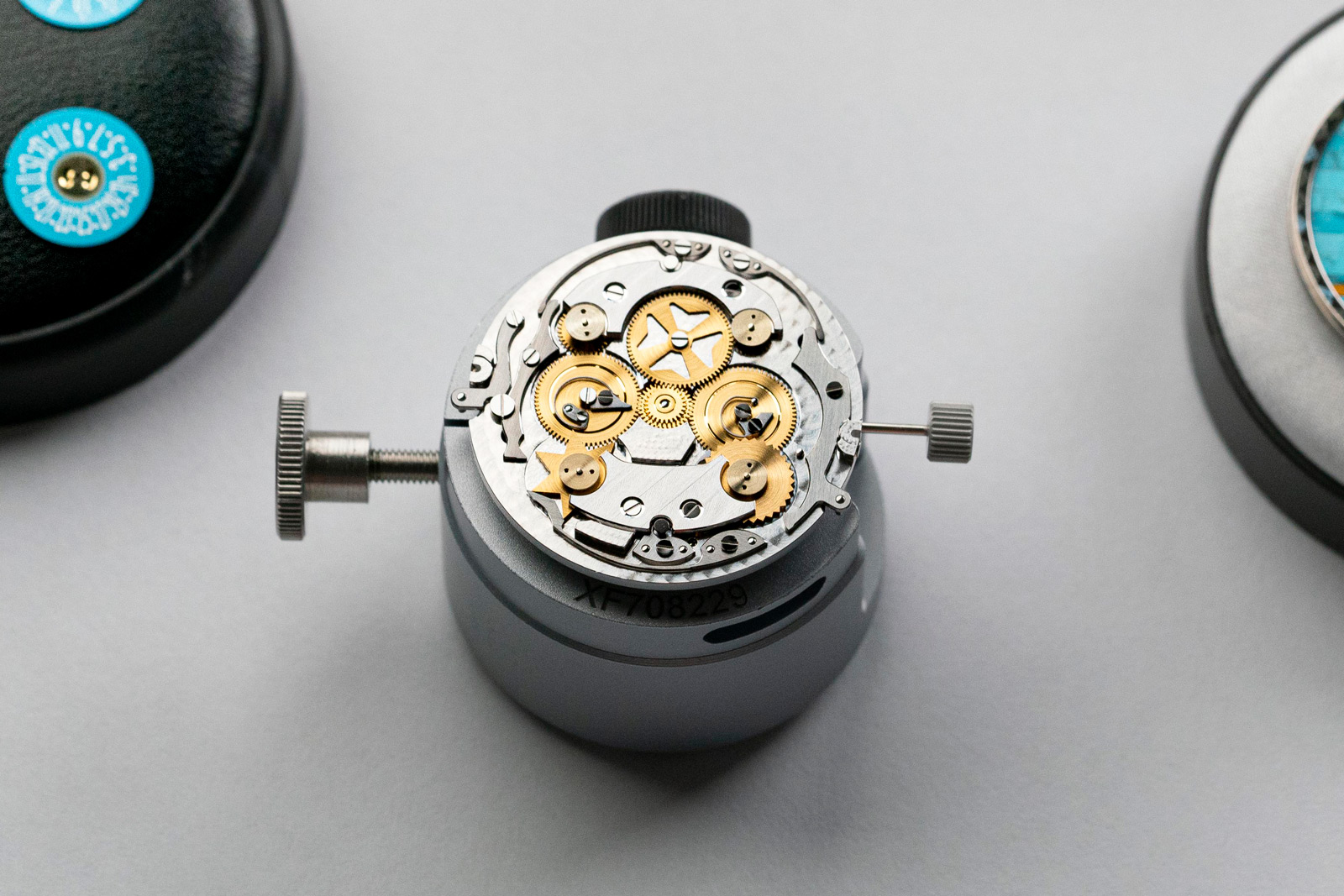 The under-dial view of the movement with all discs removed 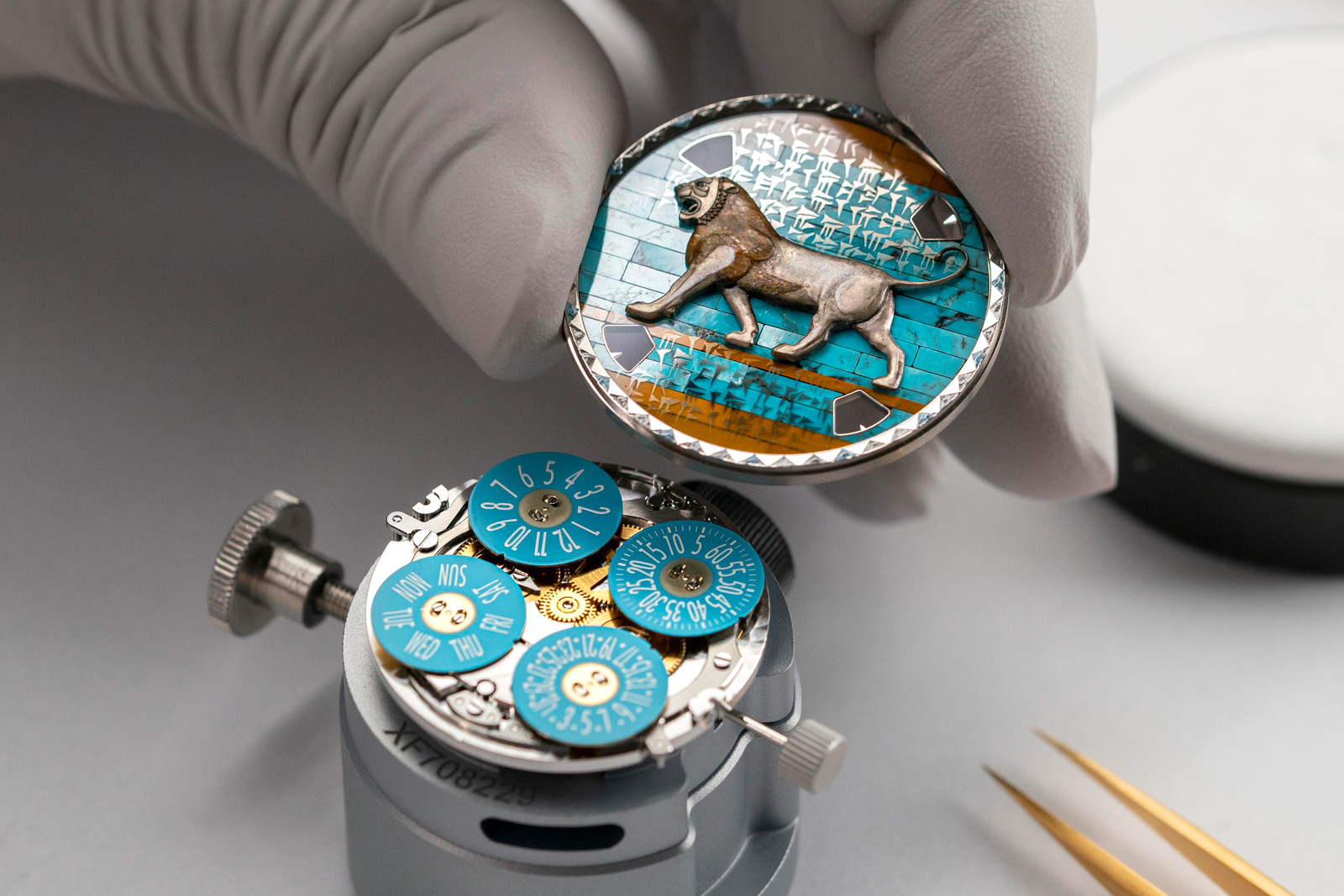 The movement with the discs for the hours, minutes, day, and date

The cal. 2460 G4/2 is fitted with a customised rotor specific to the Great Civilisations watches. Made of 22k yellow gold, the rotor reproduces in relief the east facade of the Louvre as depicted in an 18th century etching. The relief is produced via stamping, although the die used for the process is hand engraved. 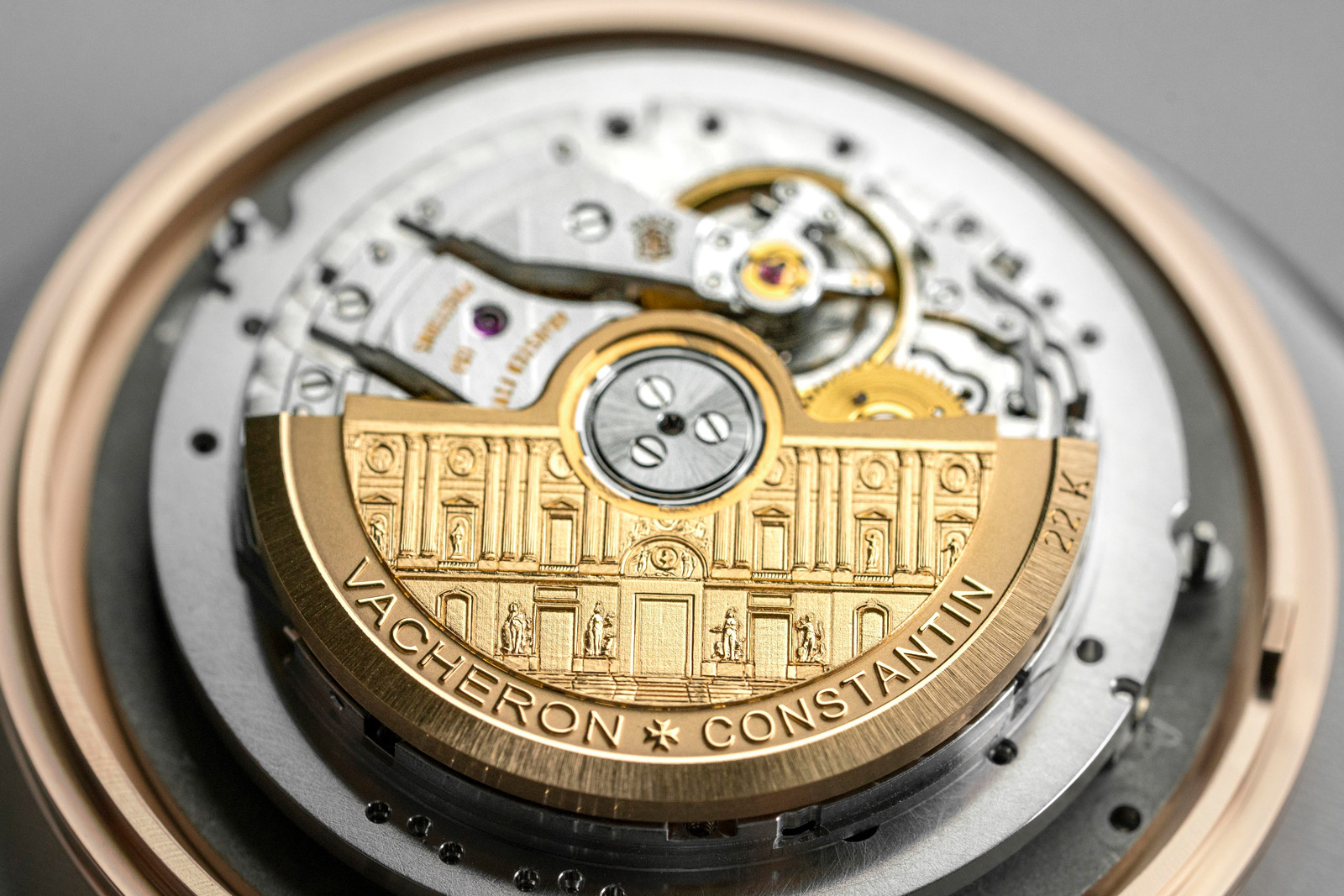 Reproducing a bust of Caesar Augustus, the Roman Emperor who succeeded Julius Caesar, the Buste d’Auguste shows the ruler in his fifties wearing a crown of oak leaves. While the bust in the Louvre is marble, the miniature on the dial is hand-engraved solid gold. It sits on a dial centre that’s been enamelled in dark green and ringed by a Roman mosaic inspired by a fourth century mosaic found in modern-day Israel. The mosaic rendered on an impressively minuscule scale. Made up of 660 tiny pieces, it relies on seven types of mineral stone: quartzite, cacholong, dumortierite, mochaite, red jasper, grossular, red aventurine. The decorative ring around the dial, on the other hand, is modelled on another fourth century mosaic is what is now eastern Tunisia. And behind Augustus are lines of text in Latin that are a tribute to the Emperor, drawn from a dedication given at the opening of a city in Algeria that was once part of the Roman Empire.

A granite sphinx that might be over 4,000 years old, the Great Sphinx of Tanis is missing a nose but still remains imposing. And so it is on the dial of the Grand sphinx de Tanis, which bears the head of the sphinx. Thanks to a clever tweak of the perspective, it appears to loom over the view despite the small size. Unquestionably the most striking of the quartet, the Lion de Darius takes inspiration from a relief taken from the Palace of Darius in Susa. Built by the Achaemenid king during the sixth century BC in what is modern-day Iran, the palace featured walls decorated with reliefs depicting various creatures and scenes. 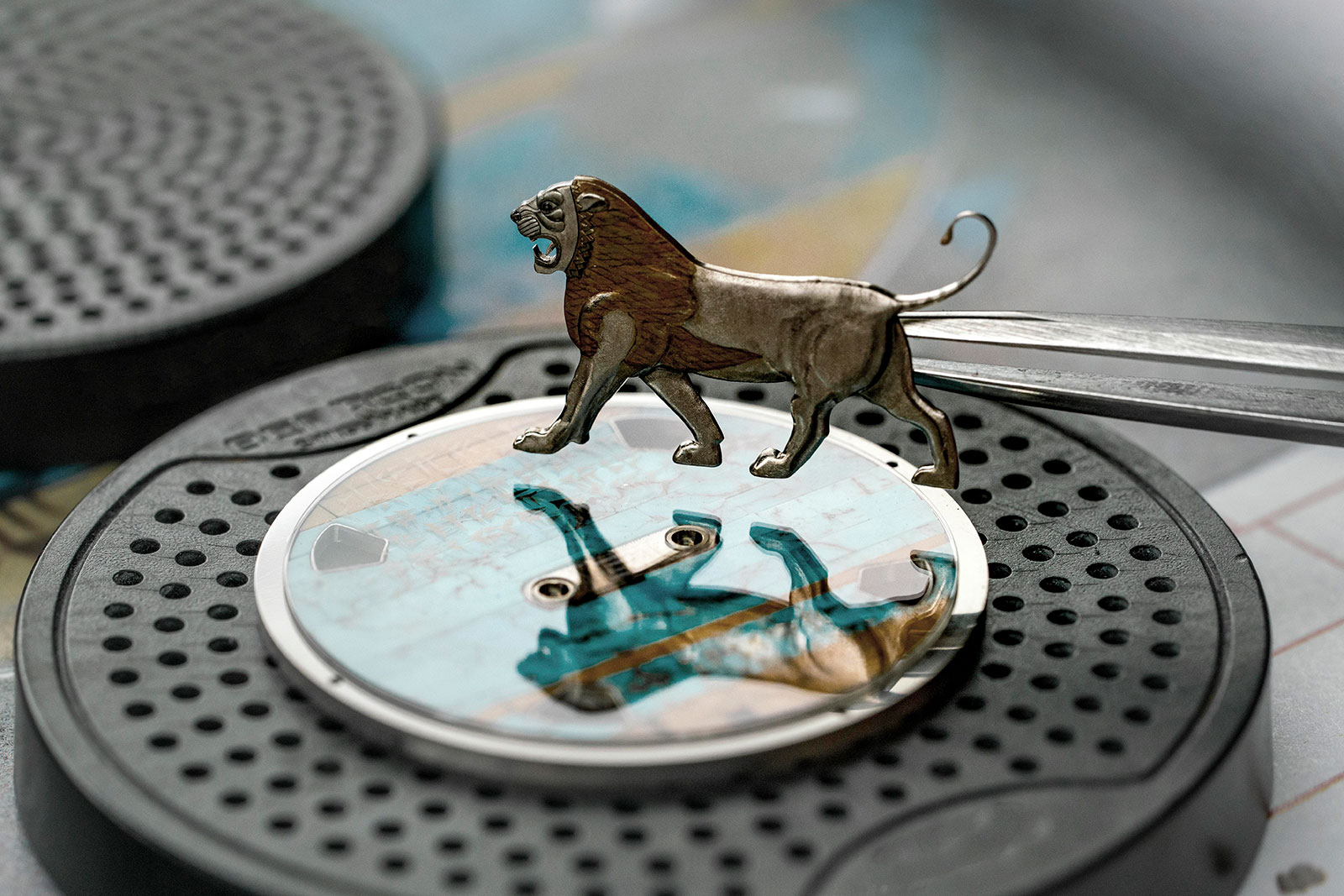 One of these is a lion frieze showing several of these creatures – symbols of royal power in the Achaemenid Empire – that’s been reproduced in hand-engraved solid gold against a backdrop of turquoise, a colour seemingly at odds with the lion frieze as it appears today. The reason for the colourful dial is that the frieze is made of glazed bricks that have lost their colour over the millennia, so the dial imagines the lion frieze as it might have been in its time. 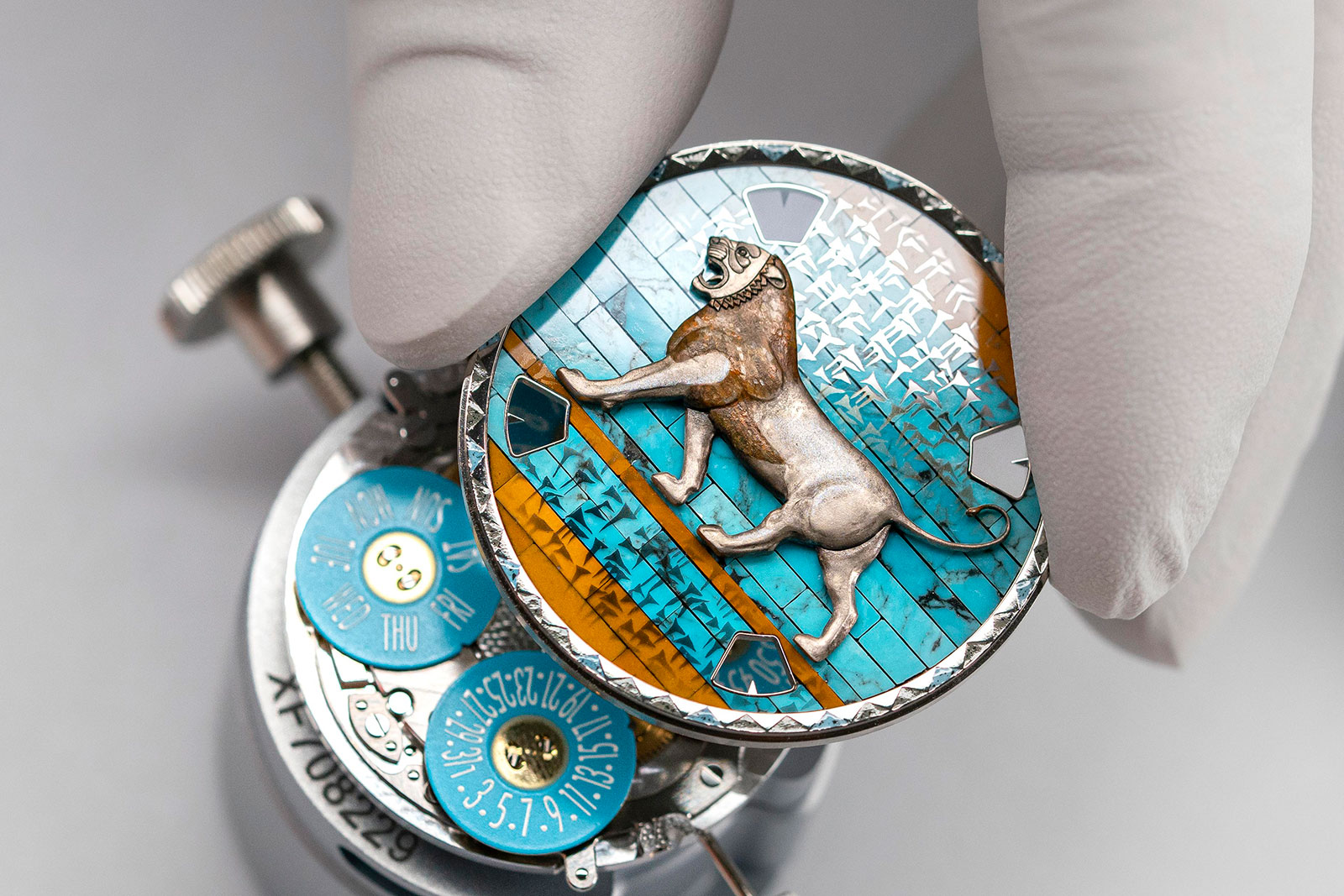 The dial is covered in tiny tiles of turquoise, along with tiles of yellow jasper for the upper and lower bands. Sixty-nine pieces of stone were required for the dial mosaic, each piece carefully cut and positioned by hand.

The decorative ring around the dial is inspired by yet another frieze from the palace, this time the “Frieze of Archers”. Its pattern is made up of alternating triangles of engraved metal and champleve enamel. 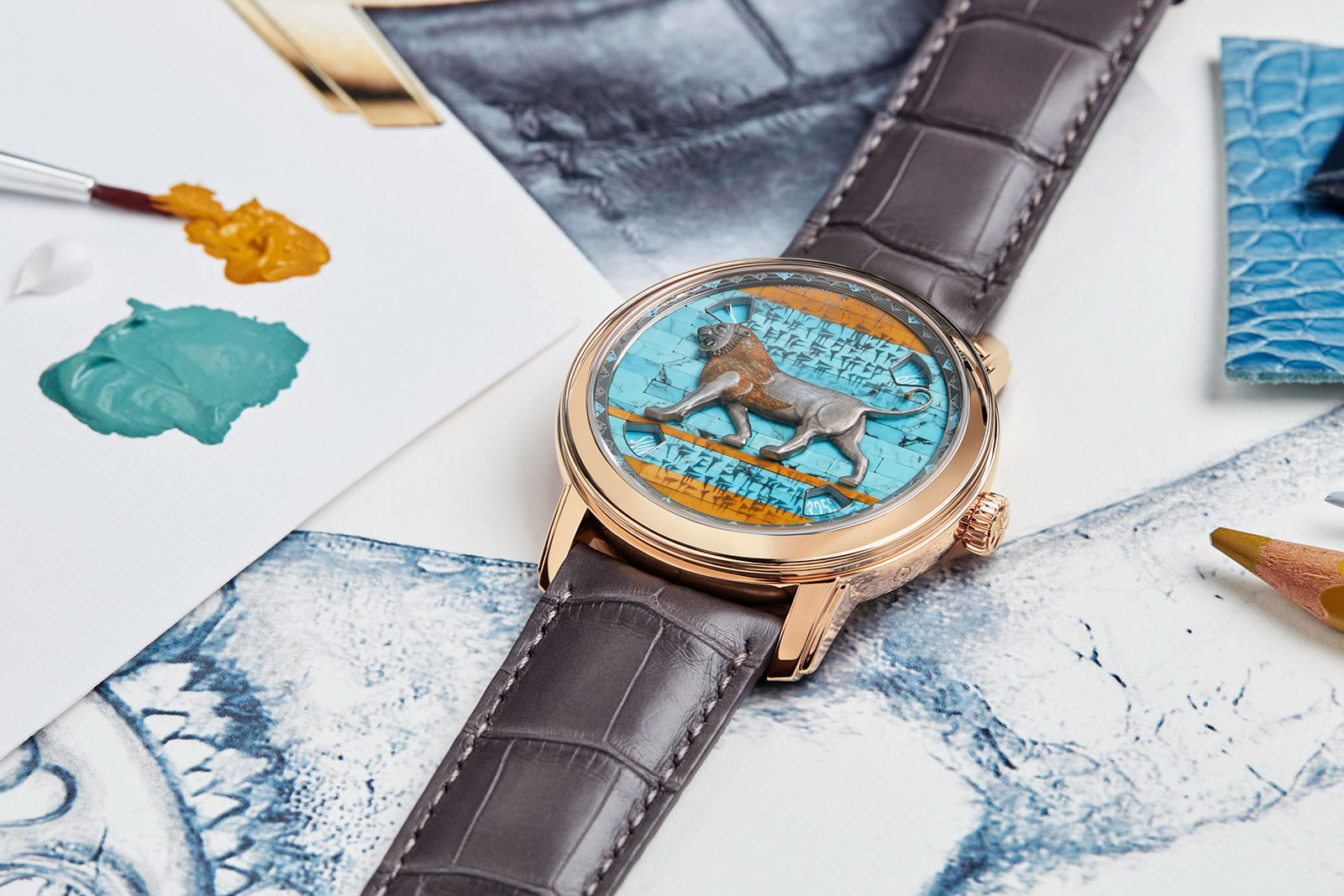 Headless but still strikingly graceful, the Winged Victory of Samothrace represents Nike, the Greek goddess of victory. Here the miniature sculpture sits on a dial centre of opaque enamel in orange-brown, a colour that is especially difficult to create according to Vacheron Constantin. It’s a mix of other colours of rare enamels that are not longer available and requires six firings in the oven. The orange-brown centre is ringed by grisaille enamel, a technique that calls for the artful removal by scratching of the top surface of enamel to reveal the contrast-colour enamel below. The grisaille enamel depicts a pattern taken from a pair of Greek vases in the Louvre. And around the dial is a gold ring that’s been hand engraved with a motif from the Vase of Pergamon, a funerary vase. 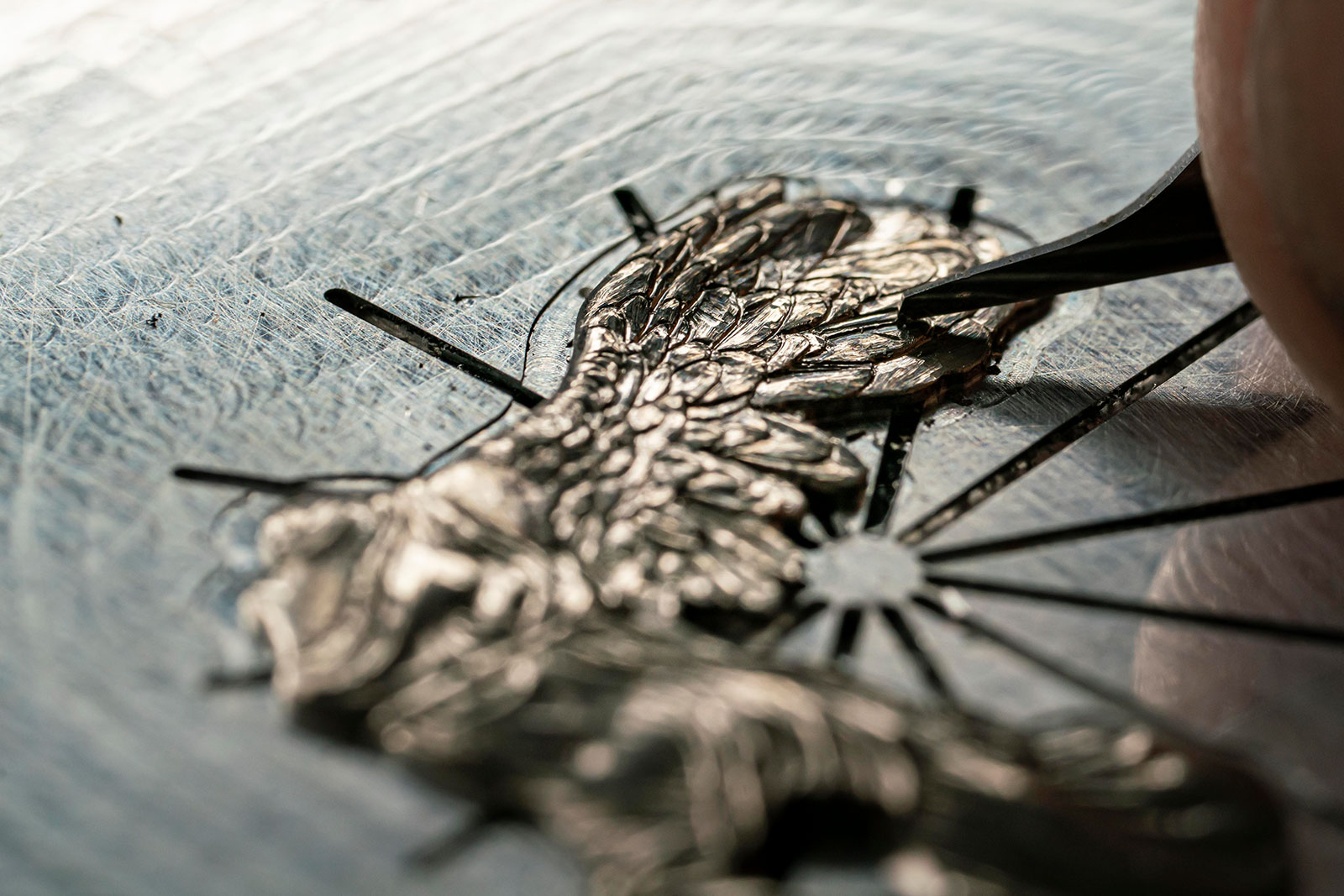