Most famous for its jewelled timepieces and the Astronomia, Jacob & Co. specialises in over the top watches. One of its latest is the Opera Godfather Minute Repeater. Inspired by the film of the same name, it’s a massive watch in the brand’s typical style of a sapphire cake dome containing a 758-component movement. While The Godfather branding on the dial is gaudy, the mechanics of the watch are surprisingly unusual and impressively complex.

The Godfather repeater can chime the time with the minute repeating function and also play The Godfather theme on the miniature two-cylinder musical box within the case (see the video just below). That makes it a two-train grand complication at heart: one barrel and going train drives the triple-axis tourbillon and time display – which is linked to the repeating mechanism – while the second barrel and train power the music box.

Jacob & Co. specialises in loud watches, so everything has to be judged by that benchmark. The Twin Turbo Furious, for example, is one of the tamer complications the brand offers.

The Godfather repeater fits right into that repertoire. It’s enormous – almost 50 mm wide and over 20 mm high – so it scores low on wearability. But it scores high on making a state on the wrist, in both aesthetics and function, which is unquestionably the point of the whole exercise. 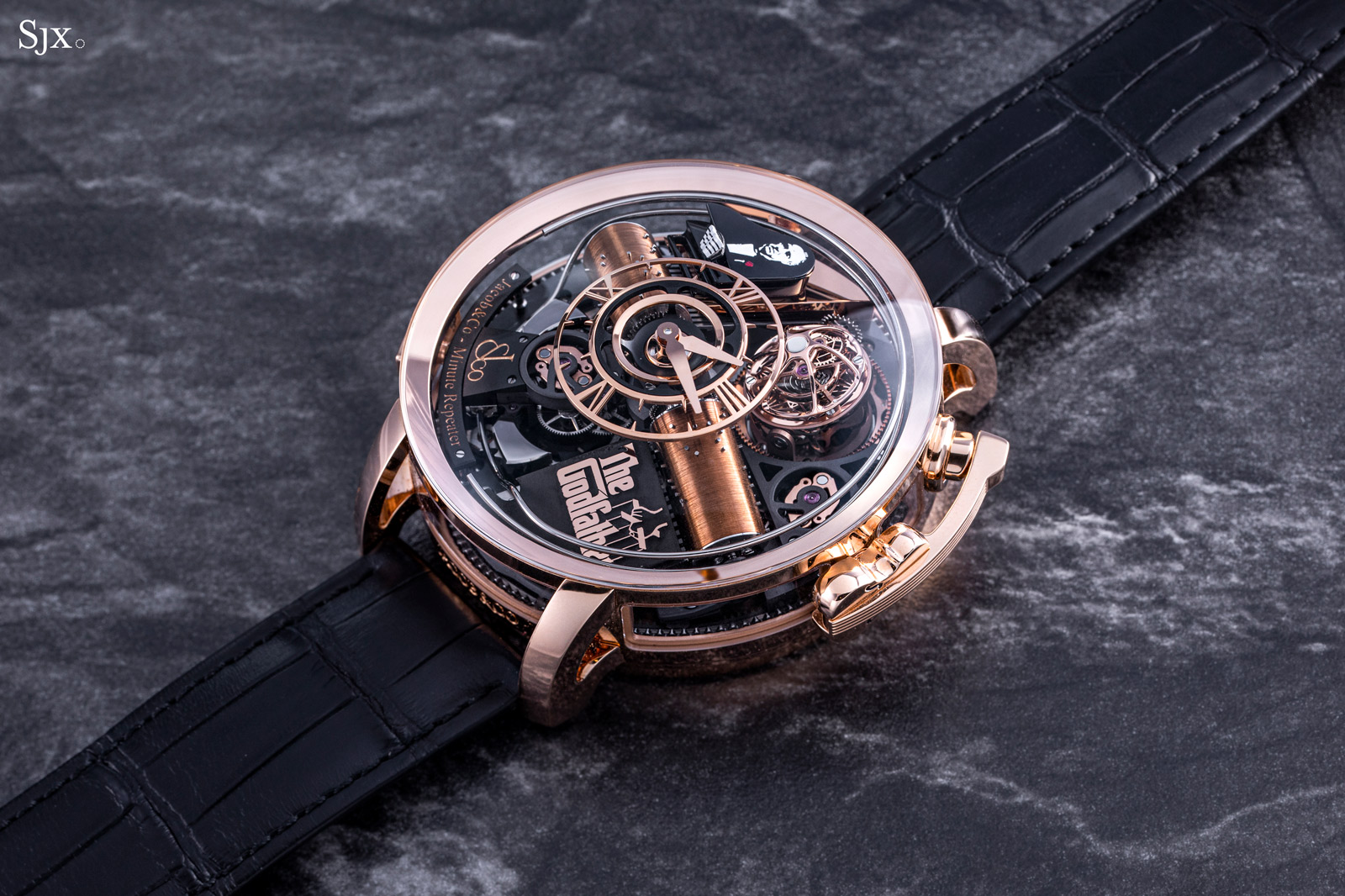 The button that activates the music box, with the slide for the repeater just below it

That said, the large size is not mere vanity. It is entirely justifiable in terms of mechanics, because the case is filled to the brim with the movement. And the movement, developed by Jacob & Co.’s frequent partner Le Cercle des Horlogers, is notably interesting. The construction of the movement can be deduced from what is visible, and it is certainly novel – the layout had to be contorted into order to accommodate the music box, time display, and tourbillon on the front. The repeating mechanism is visible on the back

Its combination of complications – repeater, music box, and tourbillon – is uncommon. A handful of brands do make music-box watches, notably Breguet, Christophe Claret, and Ulysse Nardin, but with neither a repeater nor tourbillon, making Jacob & Co. the only one to offer such a watch.

Those acoustic complications makes sense together, but the nature of a music box inevitably calls for a huge movement, which results in a watch that is massive. Even the Breguet La Musicale 7800, which is probably the most elegant music-box watch ever, is 48 mm in diameter. One cylinder of the music box along with the twin gongs

The sheer complexity of the Godfather repeater is impressive. And it performs well in terms of sound. Both the repeater and music box are clear and pleasant, despite the inevitable buzz of the governor. The repeater in particularly is especially sonorous, thanks in part to the wide, airy case interior.

As an over-the-top, highly-complicated watch that makes a bold statement, the Godfather repeater succeeds admirably. Its size and complications are flamboyant enough in themselves, which makes the branding on the dial excessive and unnecessary.

The Godfather emblem and Marlon Brando portrait on miniature grand piano – not forgetting the violin-shaped crown lever – bring to mind an inexpensive movie souvenir. They are tacky and also unnecessary – take all of it away and this would still be the Godfather repeater. 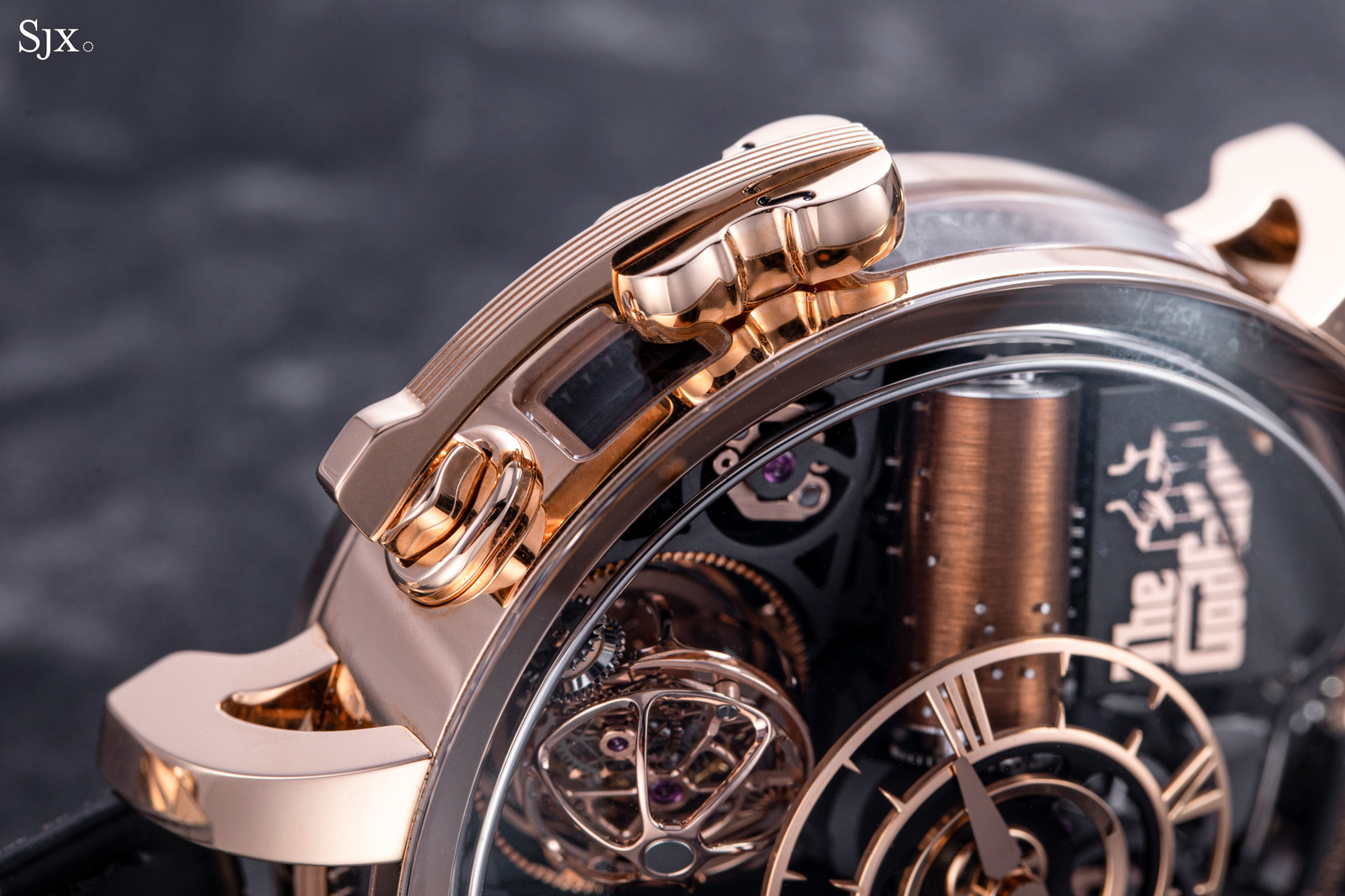 And on the topic of The Godfather, Jacob & Co. has licensed the rights to the film for a slew of watches. The base-model Godfather wristwatch is a triple-axis tourbillon with music box and an orbital display, but without a minute repeater. There’s a half dozen variations of that model, plus a few versions of the Godfather repeater, including one with (again tacky) bullet markers for the hours. And Jacob & Co. also makes a few Scarface watches. There are way too many watches based on gangster movies in the brand’s catalogue, though that might just be a consequence of what its clients want.

The Godfather repeater excels at what it wants to be. And for that it demands a retail of US$600,000, which makes it expensive relative to comparable watches. The Louis Vuitton Carpe Diem Minute Repeater, for instance, retails for a bit under US$500,000. Still, there is nothing else quite like it – repeater, music box, and multi-axis tourbillon (not forgetting the retro organised crime theme) – so it isn’t really comparable to anything else.

Under the cake dome 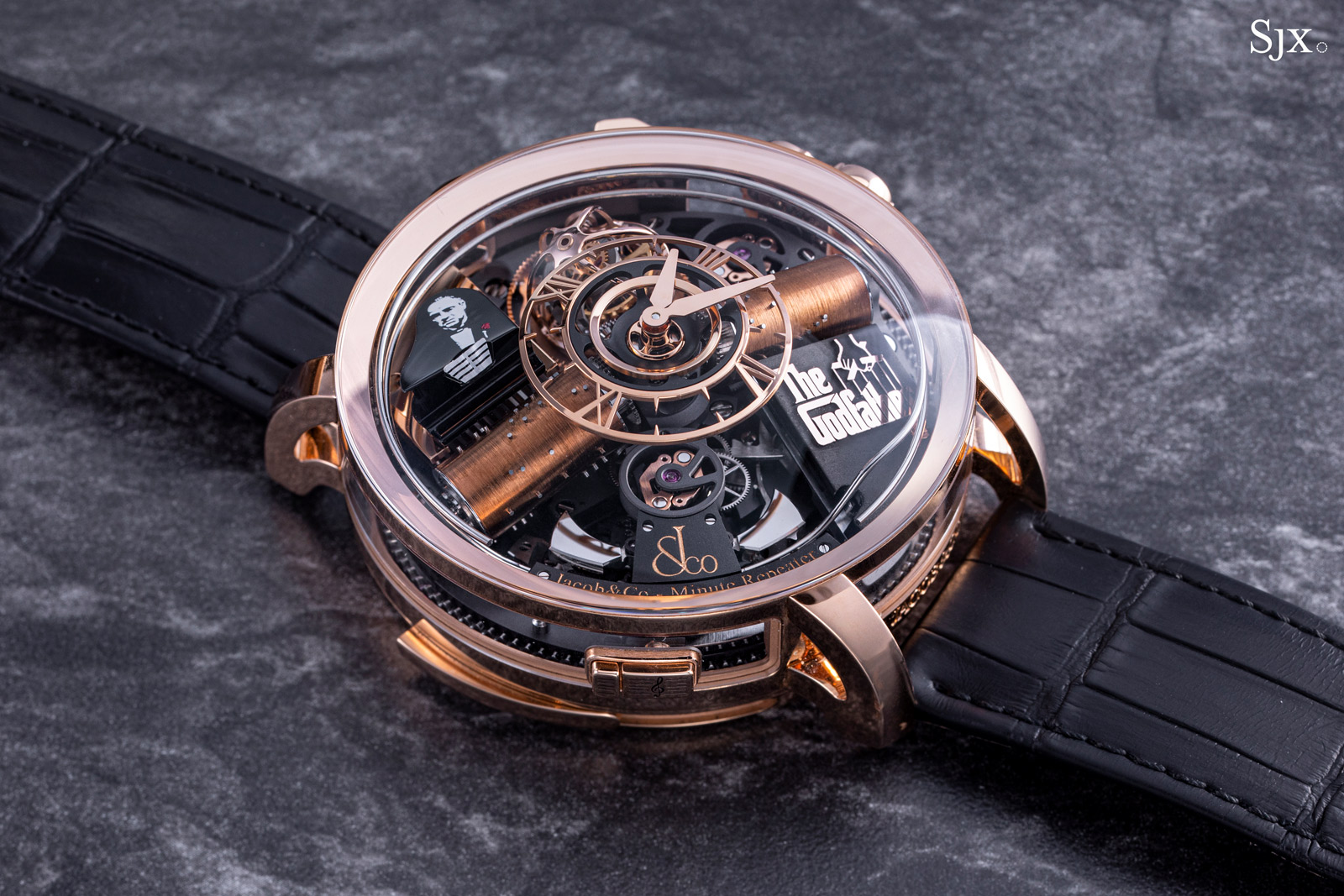 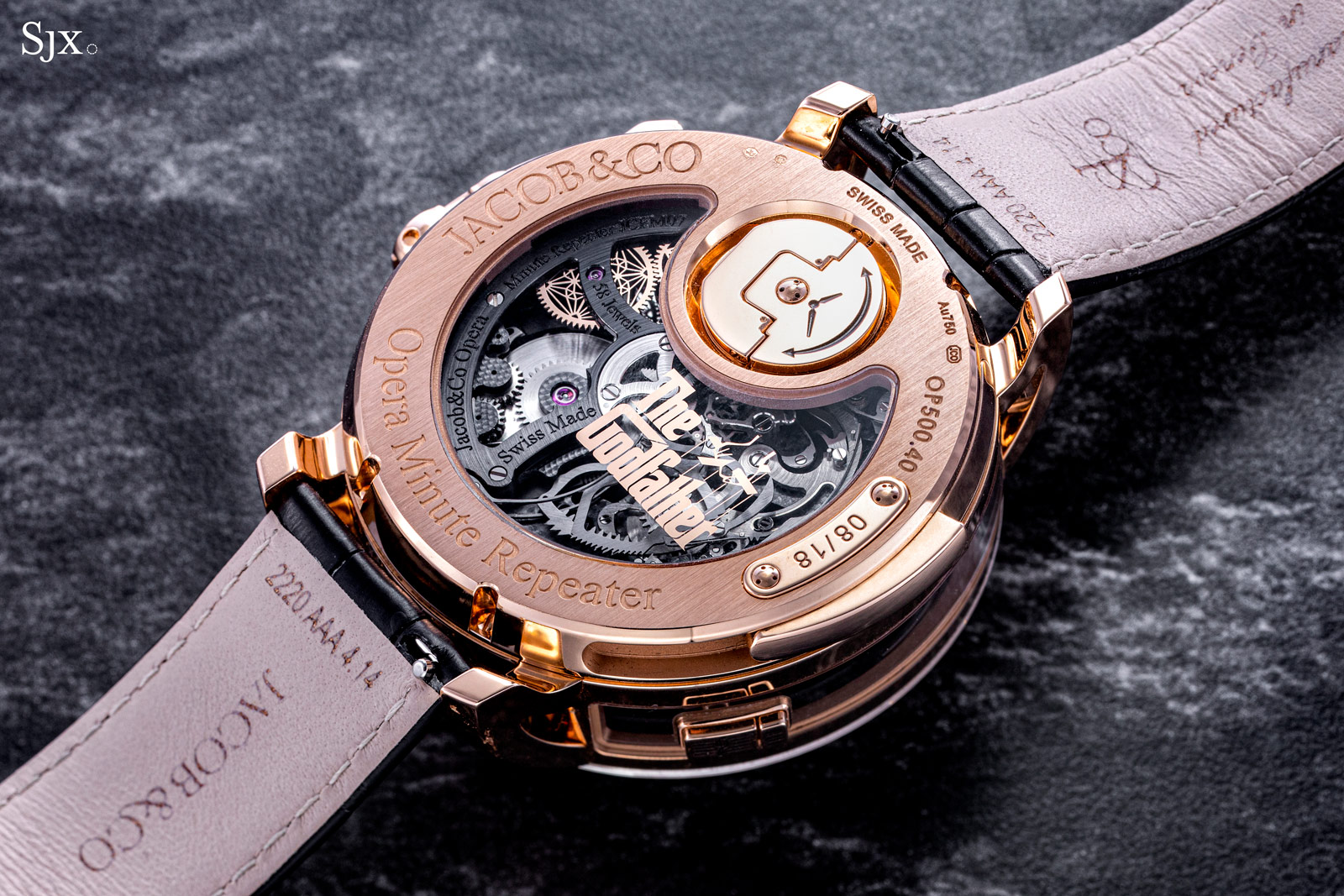 All those windows and its tall profile also give it something of a cake dome appearance, which has become Jacob & Co.’s signature aesthetic for its watches thanks to the Astronomia, the brand’s bestselling complicated watch.

The case is very tall, which gives the open-worked lugs an exaggerated form. But they are smartly kept short and sharply angle downwards, while the strap attaches at the base of the case, so the watch sits reasonably well despite its diameter. 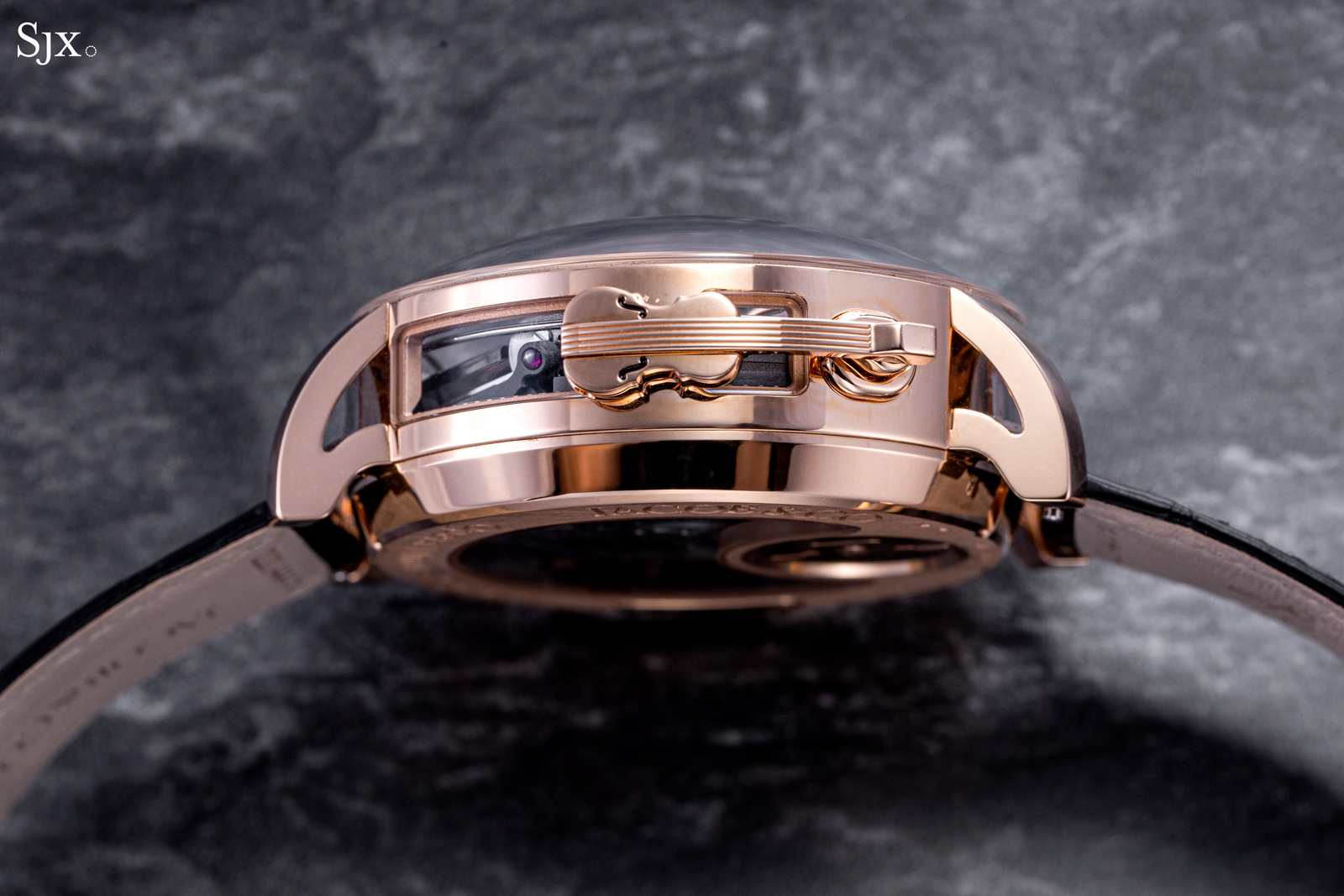 And the legibility is surprisingly good despite everything on the dial. That’s thanks to the elevated, skeletonised sub-dial for the time that is in rose gold, giving it strong contrast against the movement. Realised with additional gearing to raise it, the elevated time display is necessary to leave space for everything beneath – two cylinders for the music box, an orb-like triple-axis tourbillon, and the chiming mechanism. And encircling all of that are the raised gongs of the repeater. The time display, tourbillon, and mainspring make up the section of the movement responsible for timekeeping. And the final part is the music box, which is an independent mechanism. In other words, the music box can function correctly even if the time-telling barrel is not wound and the time has not been set.

It can do that because the music box is powered by its own barrel, which is wound by the same crown. I believe that the two barrels are stacked, with the barrel closest to the case back powering timekeeping, and the other hidden barrel for the music box. One of the music cylinders, with the black-lacquered, solid gold miniature piano containing the teeth of the comb that “plays” the cylinder One of the barrels is visible through the back, along with a pair of intricately skeletonised wheels that drive the tourbillon

A single piece that integrates the violin-shaped lever, the crown winds in two directions, one to wind the timekeeping barrel and the other for the music box barrel.

Fully wound, the timekeeping movement runs for a 44 hours – respectable given the size of the constantly moving tourbillon – while the music box can play three full sequences on a full wind. The pull-out tab on the back sets the time It’s a difficult to image a triple-axis tourbillon not being the most prominent element of a movement, but in the Godfather repeater it has a lot of competition.

The music box is made up of two copper cylinders with steel pins that each rotate against a steel comb. The vibrations of the 30 teeth of both combs then create the musical tune, which is made up of 120 notes.

Because the cylinders have to rotate at a constant rate, their motion is regulated by a governor visible at two o’clock. Like the governor for the repeater (that’s visible at six), this utilises air resistance to moderate the motion of the cylinders. The grand piano with Brando’s portrait is a too literal, though it is solid 18k gold and lacquered black… As is the movie’s emblem, which done in relief on a solid 18k gold plate The tourbillon moves at high speed: its outermost cage makes one revolution every 180 seconds, the intermediate cage every 48 seconds, and the innermost cage every 24 seconds.

The tourbillon also incorporates a “torque declutching” mechanism, essentially two superimposed wheels linked by a spring that have a limited range of relative motion. This limits the energy delivered to the tourbillon – which is large and heavy – and conversely smooths out the energy transmitted to the balance wheel. As a result of this mechanism, the motion of the cages occasionally appears jerky, as if it is rotating in steps.

The declutching mechanism is a solution to a problem created by the tourbillon, and would be unnecessary with a simpler tourbillon or none at all. But that would completely miss the point of such a watch, which is maximalist in both style and function. 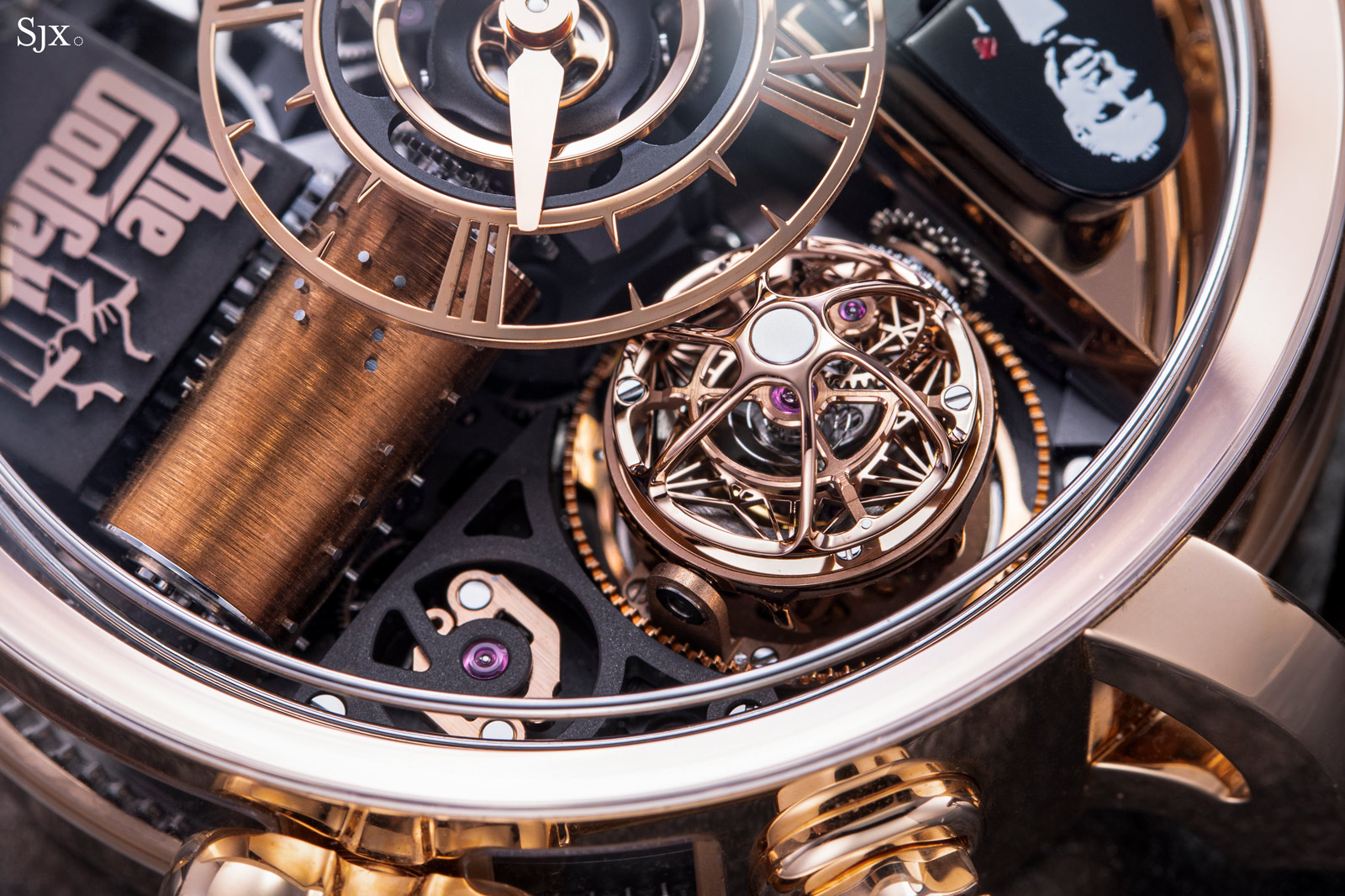 As multi-axis tourbillon go, this one is one of the more elegantly shaped. Thanks to the liberal use of skeletonised wheels fabricated with LIGA, a lithography technique that allows for extreme detail on a tiny scale, the tourbillon boasts plenty of fancy shapes. 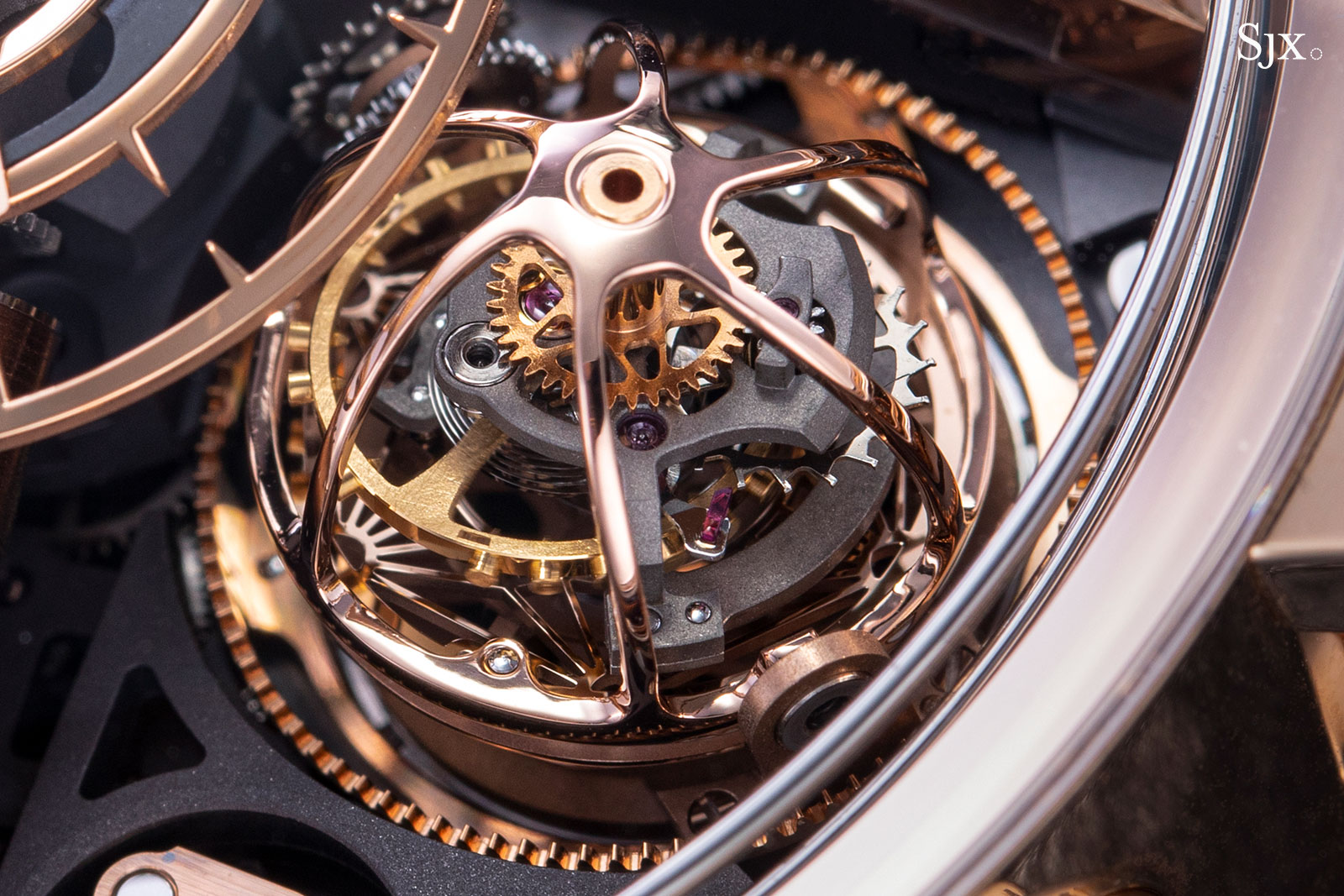 The underside of the tourbillon

The other major bit of kit on the front is the striking mechanism. A pair of hammers and accompanying gongs are visible on the front. The repeater set up is conventional, although both gongs arch dramatically upwards as they extend out of the base, in order to clear the music box mechanism on the dial. The two hammers with the governor between them

The chiming is controlled by the strikework that is visible on the back. This is a series of racks that “read” the time and translate it into input for the hammers and gongs. In terms of decoration, the movement is workmanlike – clean, competent, and comprehensive, but not quite artisanal quality. That said, refined decoration is surely not what draws buyers to a watch like this. Granted, the Godfather repeater could be improved – mostly by dialling back on the branding – but it excels at being what it is.