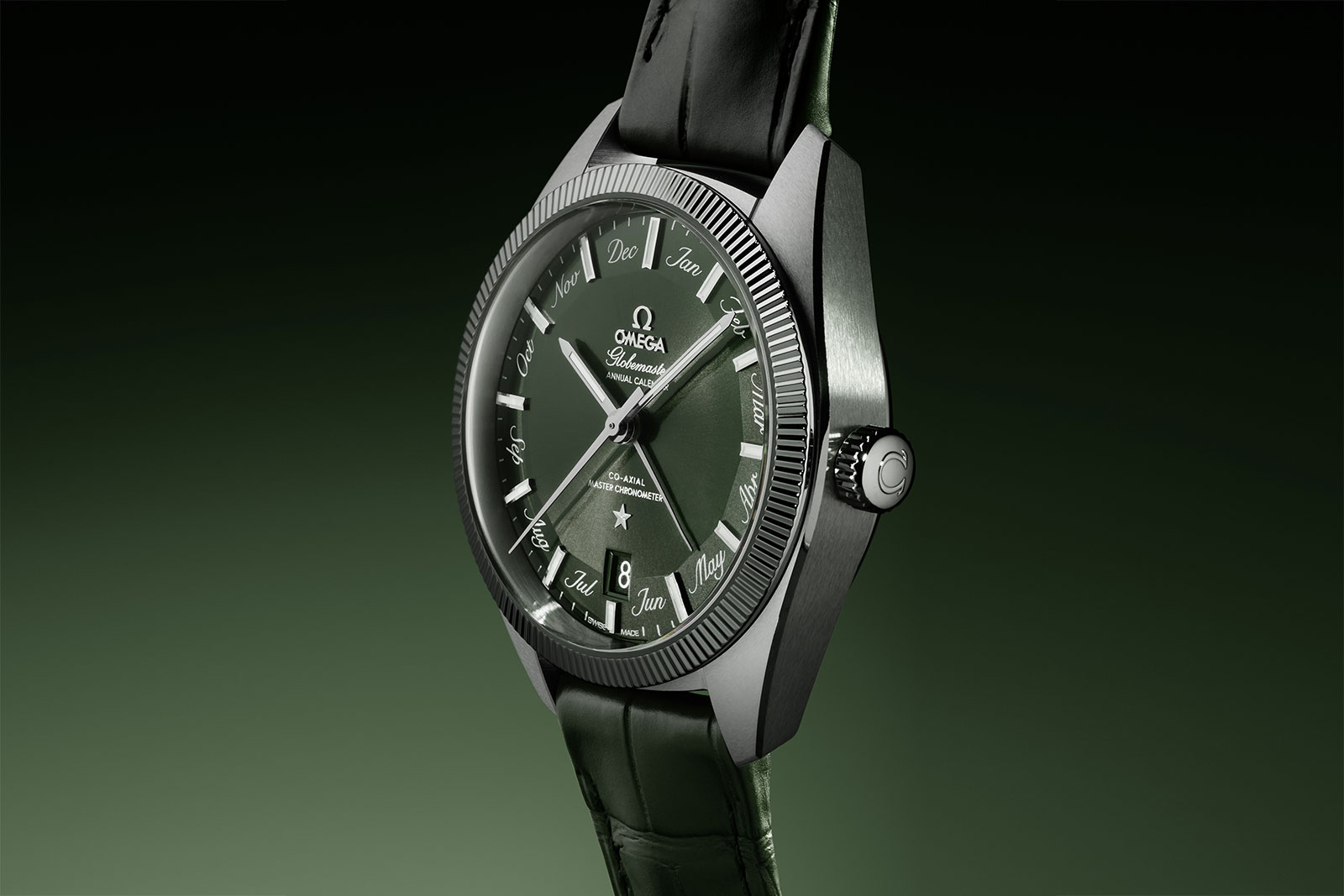 Launched in 2016, Globemaster Annual Calendar has remained under-appreciated, despite the distinctive design that combines several elements from historical Omega watches – most notably the “pie pan” dial of the Constellation – and perhaps more importantly, a practical complication.

Originally available in the same muted colours as the base-model Globemaster, the Annual Calendar has been refreshed with dials in striking colours and in different metals, including a striking burgundy and of course an olive green. 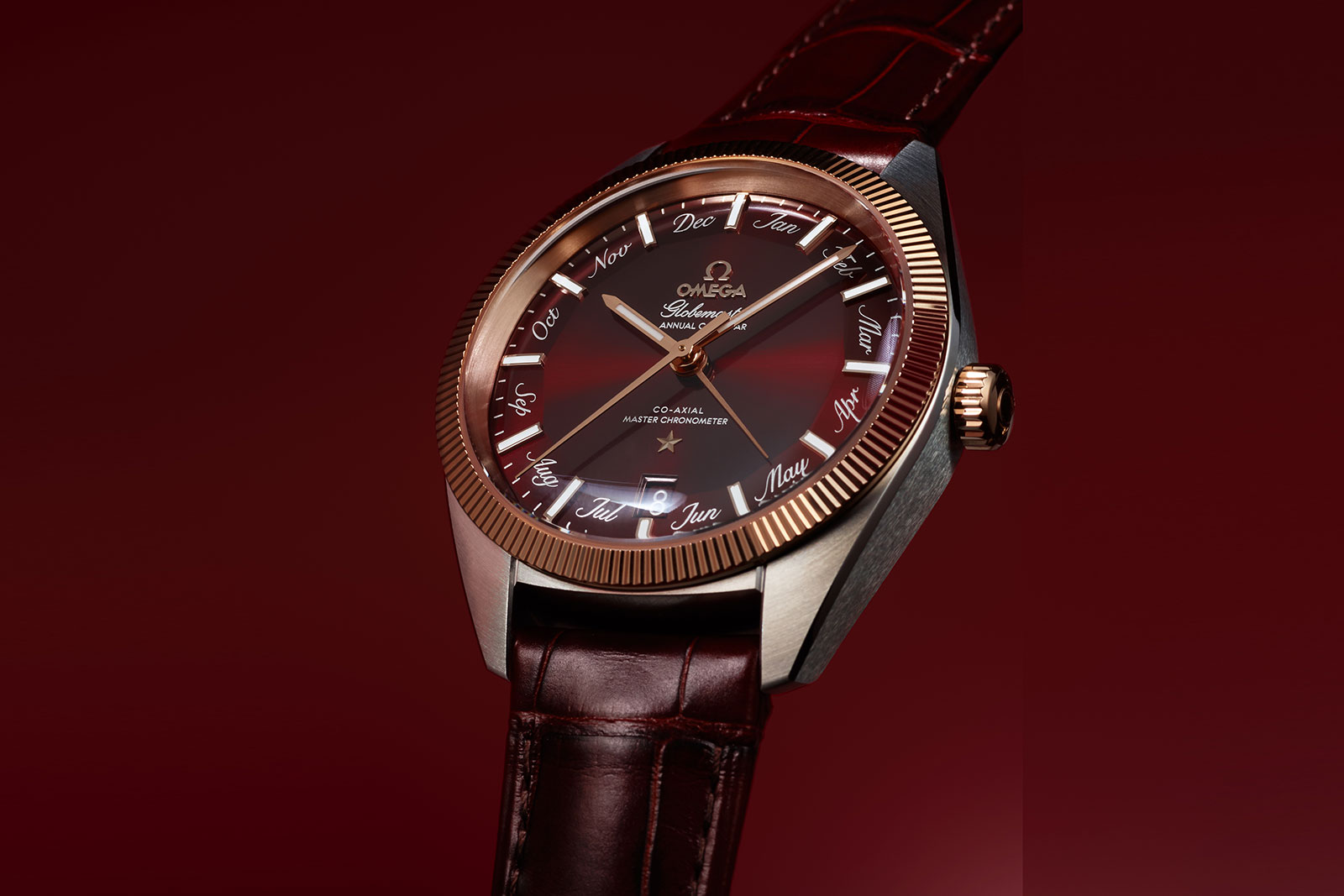 The burgundy dial in a two-tone case

The Globemaster Annual Calendar is an interesting proposition. The complication is unusual – it’s the only annual calendar offered by Omega – while the design is vintage-inspired but quirky. But the Annual Calendar has been overlooked perhaps because of the brand’s wide-ranging catalogue that is packed with more famous models like the Speedmasters, and also because of its old-school case design and restrained colours.

So the new trio is certainly a good addition to the line, especially since each of the new colours are striking and relatively unusual. The olive-green version immediately stands out, not only because it’s the year’s most fashionable colour, but also the fact that the shade is perfect – it’s restrained but rich. And it’s in steel, which makes it the most affordable of the variants. 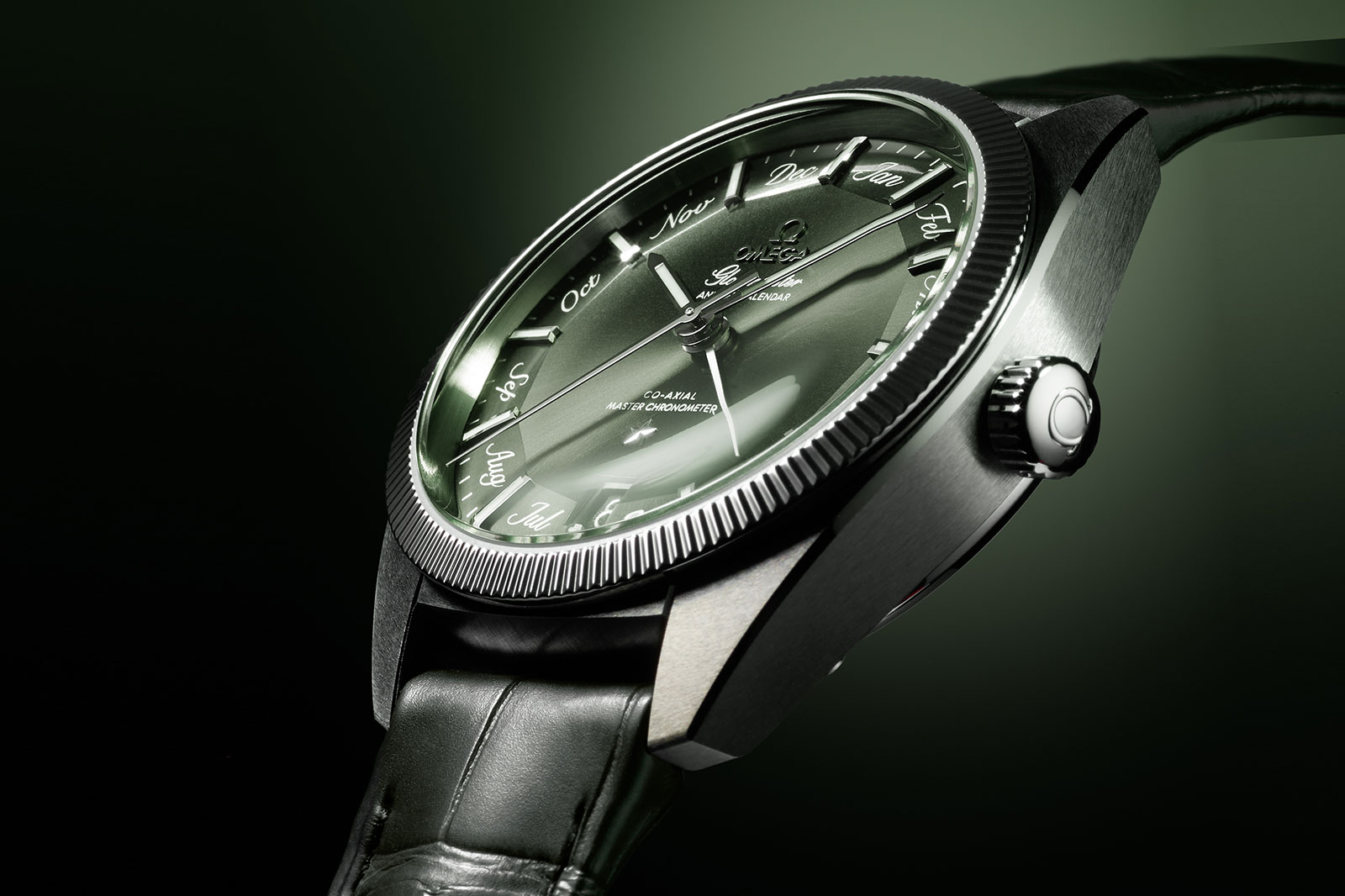 Most interesting in terms of aesthetics is the two-tone version. The pairing of a burgundy dial with Sedna Gold, which is Omega’s proprietary, fade-proof pink gold, is just right. It’s a striking combination but not extravagant, or too expensive, which would have true if the case had been solid gold instead. And the two-tone look is slightly retro, which does well with the vintage-inspired design and italicised months on the dial. 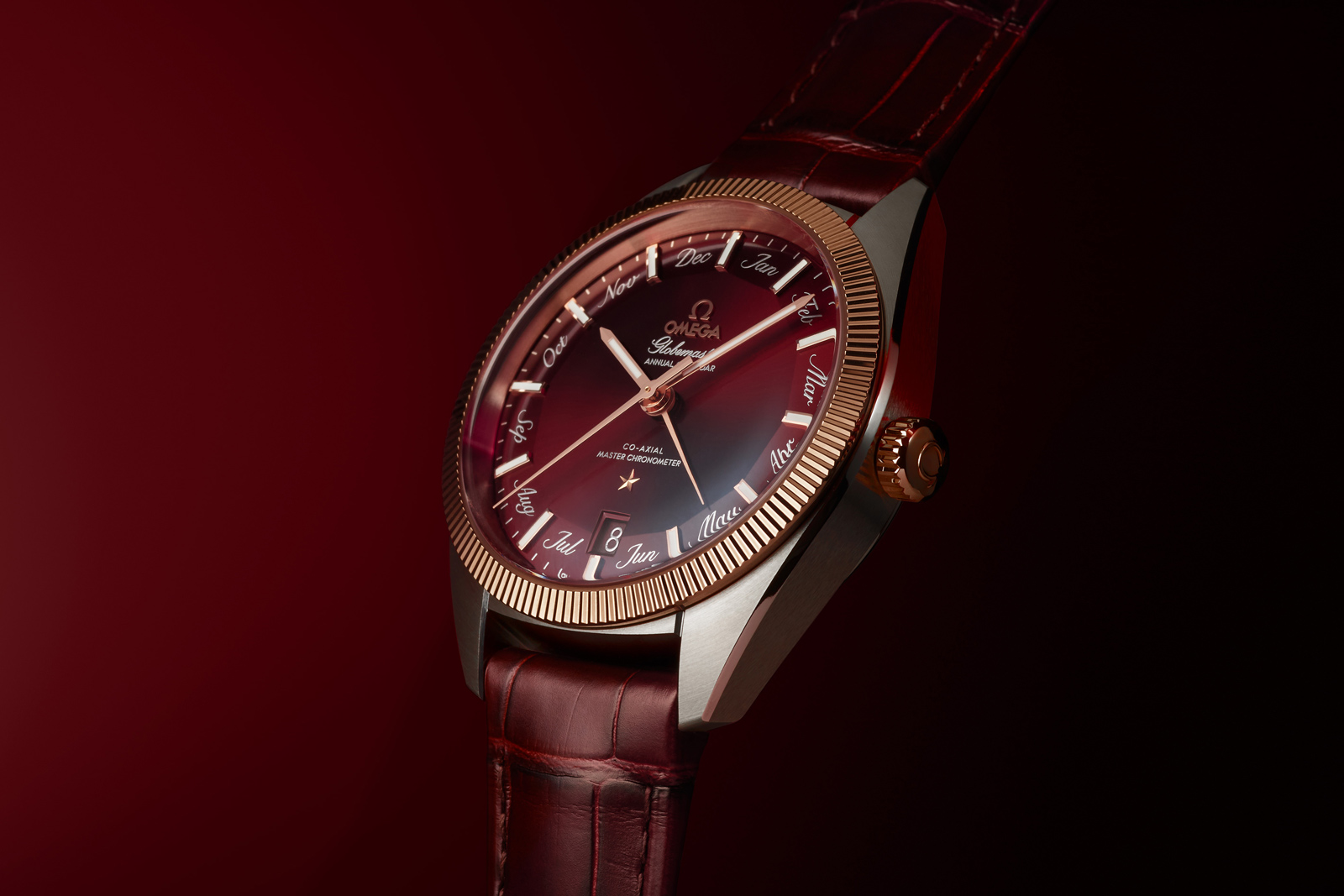 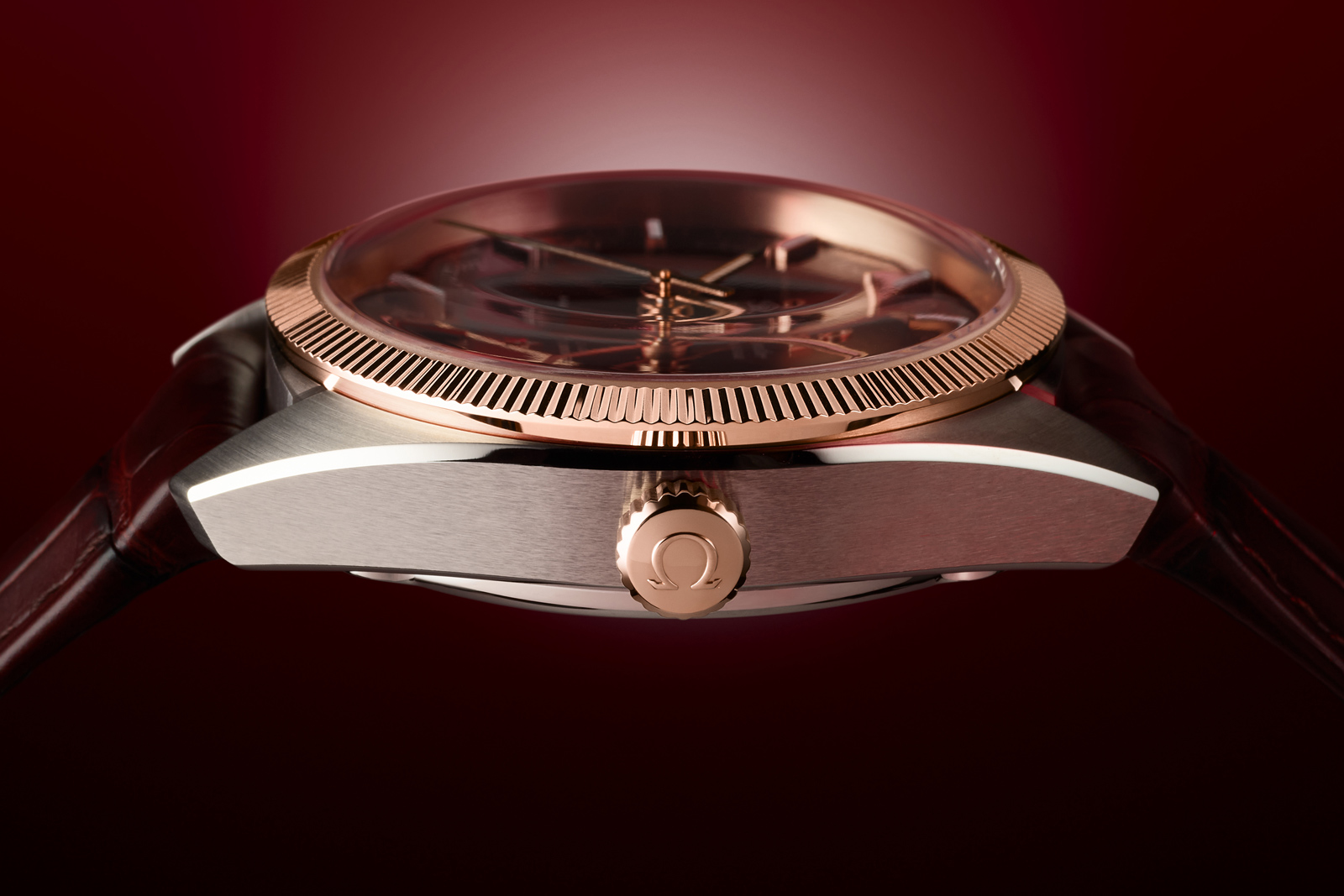 Less obvious but an appealing detail are the polished facets of the fluted bezel, which give the watch a refinement lacking in the steel version that has a brushed tungsten bezel

But for the enthusiasts who wants a classic, luxe look, the solid gold version is the way to go. The all-gold aesthetic calls to mind vintage “pink on pink” wristwatches, while the onyx inlays on the hands and hour markers are a detail that hark back to 1950s Omega watches.

In typical Omega’s fashion, the Annual Calendar has a price tag that’s entirely reasonable in both steel and two tone, with prices starting at US$8,400 for the steel model with a green dial. 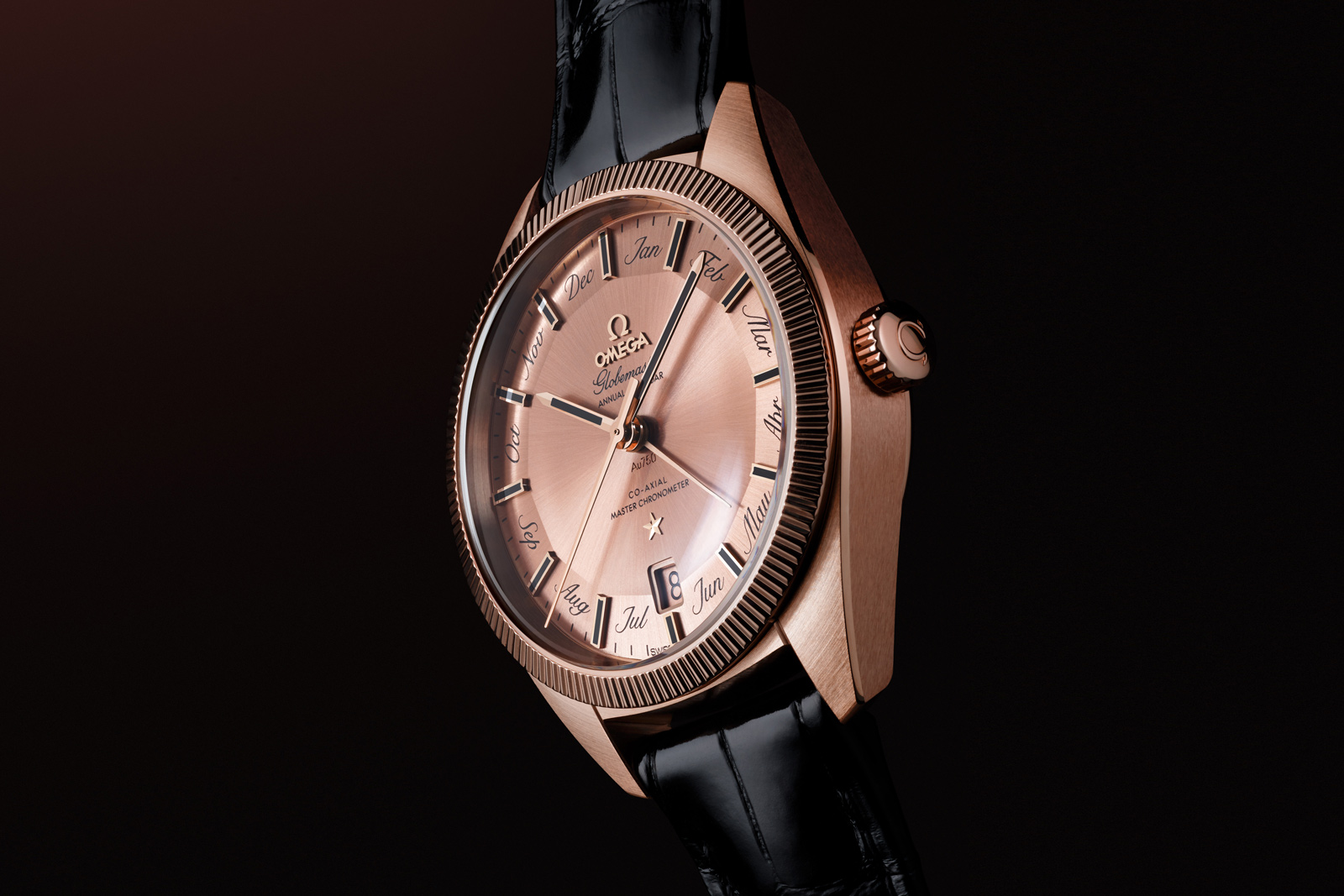 While annual calendar watches are increasingly common – even at the entry level as offered by Longines – few in this priced range are as well equipped as the Globemaster.

Among the details that stands out is the faceted dial, often nicknamed “pie pan” for its shape, which gives the watch extra depth and vintage-inspired flair.

Even more unusual, in both design and technical terms, is the annual calendar display. Instead of a conventional window, the month display comprises a central pointer that jumps instantaneously at the end of each month. And all of the months are rendered in flamboyant italic font that might seem odd initially but actually grows on you. 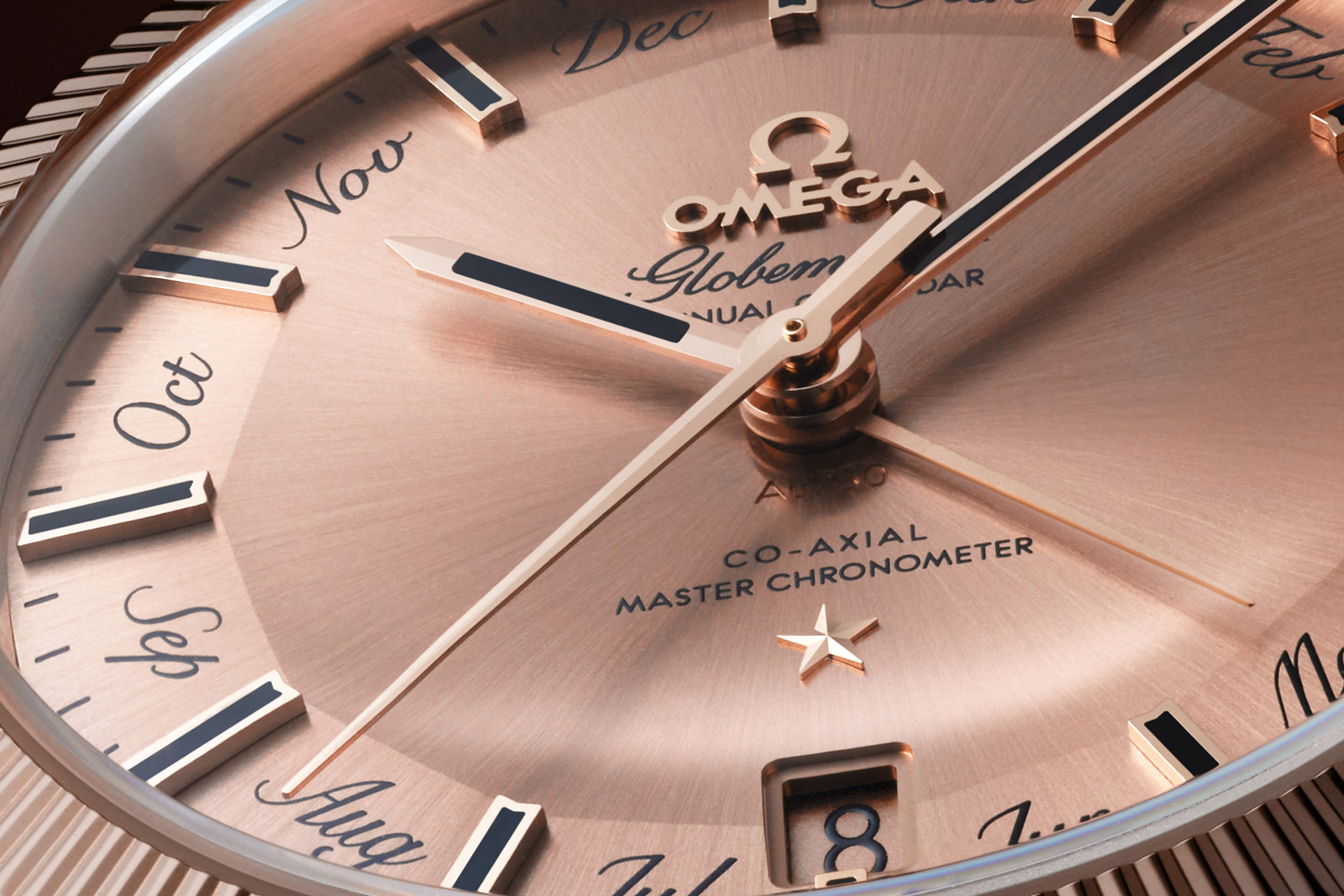 And the movement doesn’t disappoint, being one of Omega’s higher-end calibres. The cal. 8922 is a twin-barrel construction that ensures more consistent delivery of torque over its 55-hour run time. Typically Omega movements with two mainsprings have a 60-hour power reserve, but the instantaneous annual calendar display – which is a module on top of the movement – presumably consumes considerable energy.

And, of course, the cal. 8922 highly resistant to magnetism – impervious to magnetic fields of up to 15,000 Gauss – thanks to its silicon hairspring and non-magnetic escapement parts. 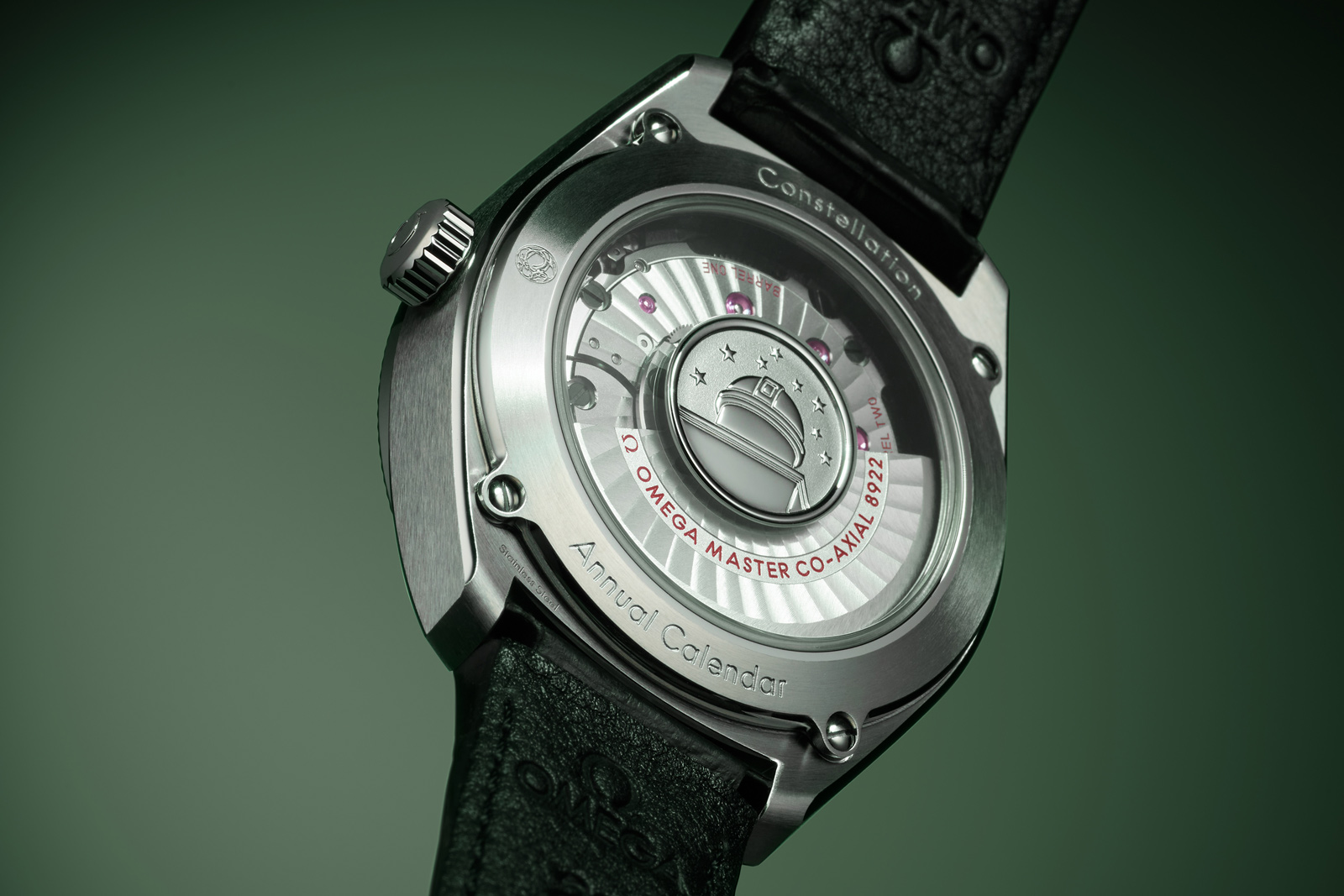 The metal medallion set onto the sapphire case back is also unusual, but it is a reference to vintage Constellation watches that featured the observatory logo on the back