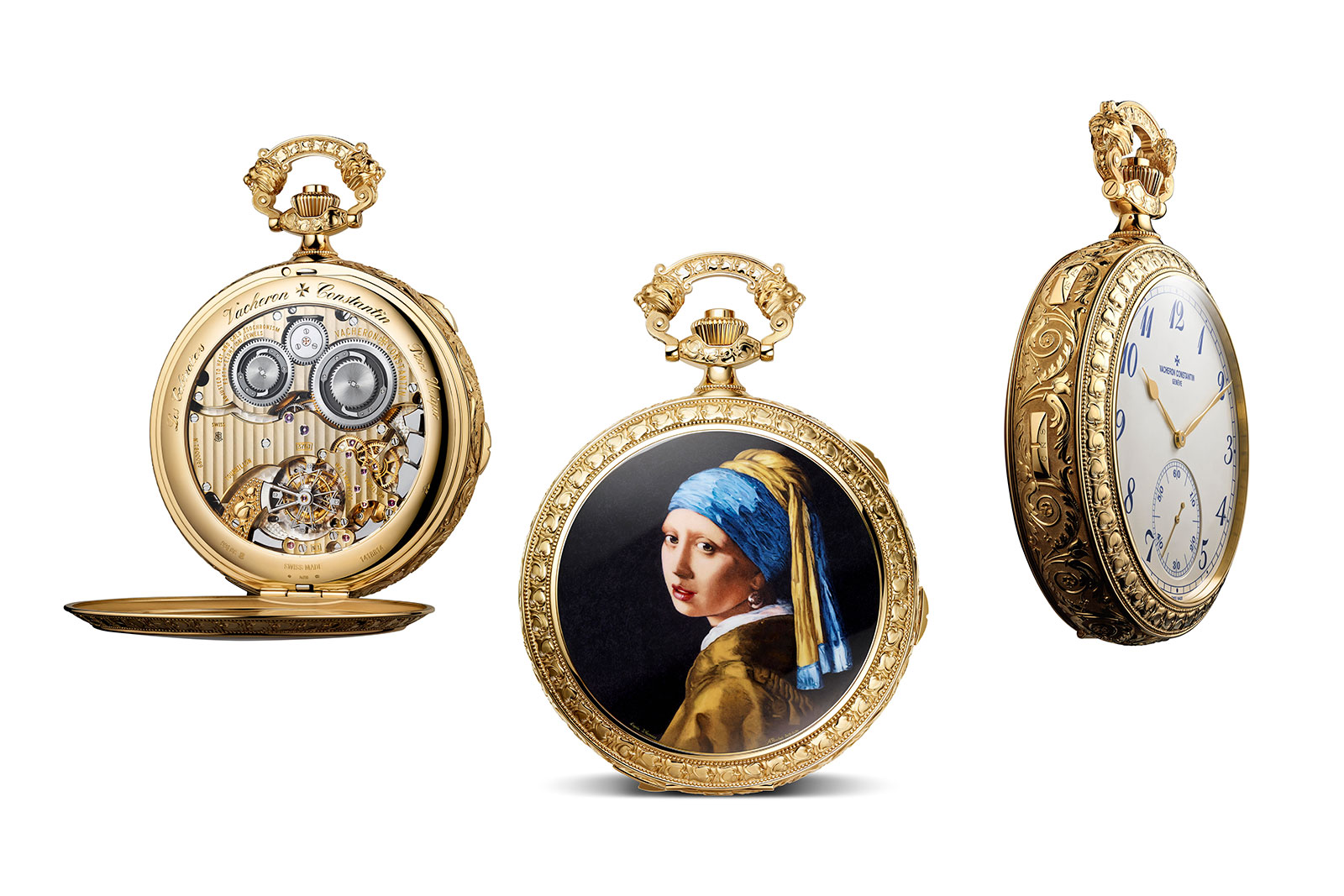 Eight years in the making, the Vacheron Constantin Les Cabinotiers Westminster Sonnerie – Tribute to Johannes Vermeer is a masterpiece in the truest sense of the word.

Reflecting the owner’s taste that is inclined towards the subtle, elegant, and artisanal, the watch is seemingly simple on the front, yet intricately decorated on its circumference and immensely complicated within.

But the true art of the watch sits on the hinged case back, which bears a magnificent miniature enamel painting by Anita Porchet that reproduces Vermeer’s ethereal Girl with a Pearl Earring. The idea for this uber pocket watch was first mooted by the owner in 2012, before being formally commissioned in 2013 during the Watches & Wonders fair in Hong Kong.

Asked about his motivation in commissioning the watch – and waiting nearly a decade – the owner says, “I wanted to have a watch made, cost-and-time-no-object, that incorporated the ultimate in art – miniature enamel by the greatest practicing enameller – with the most difficult and sublime complication, the true Westminster sonnerie – and that alone – not counting the tourbillon escapement, which to me isn’t a complication.”

“No such watch existed prior in the history of watchmaking,” he adds, “The watch came out more magnificent and monumental than I had imagined.”

And that pretty much sums up the Vermeer pocket watch, which is unquestionably one of the greatest creations ever to emerge from Les Cabinotiers, a workshop specialised in custom and bespoke timepieces. I have yet to see the Vermeer watch in the metal but I have every expectation it is a stellar example of high-end Geneva watchmaking of the fundamental sort that is devoid of hype or fads, and instead just solid, good old-fashioned craft. I know that to be a fact because of the first-rate brands and artisans involved, and also the owner’s demanding eye.

It is telling that the watch appears unadorned at a distance, but details reveal themselves up close. The dial is ivory enamel, but the numerals are a deep blue, while every surface of the case is engraved. And the miniature enamel is only visible on the back, a hidden canvas only for the owner. 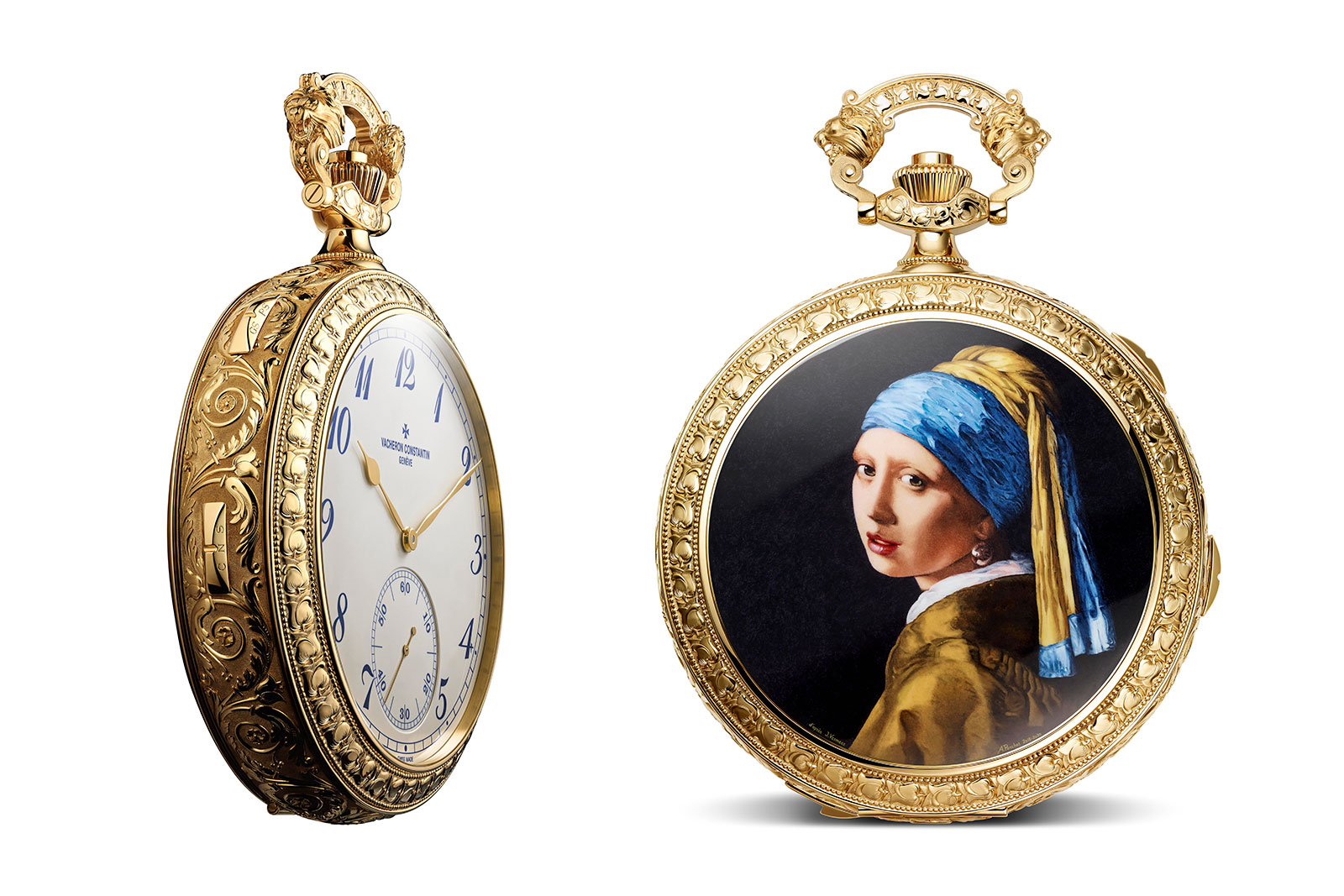 Mechanically the Vermeer pocket watch is mighty. Composed of 806 parts, cal. 3761 is essentially a movement with just one complication, but the complication executed in a most complex manner – chiming the time as it passes on five sets of hammers and gongs. Plus there’s a tourbillon. Even if it’s not a complication, the tourbillon has been executed with intense finesse.

While Vacheron Constantin’s Les Cabinotiers department has created watches more complicated and elaborated decorated, the Vermeer pocket watch is certainly the most exquisite in its unique combination of craft and complexity. 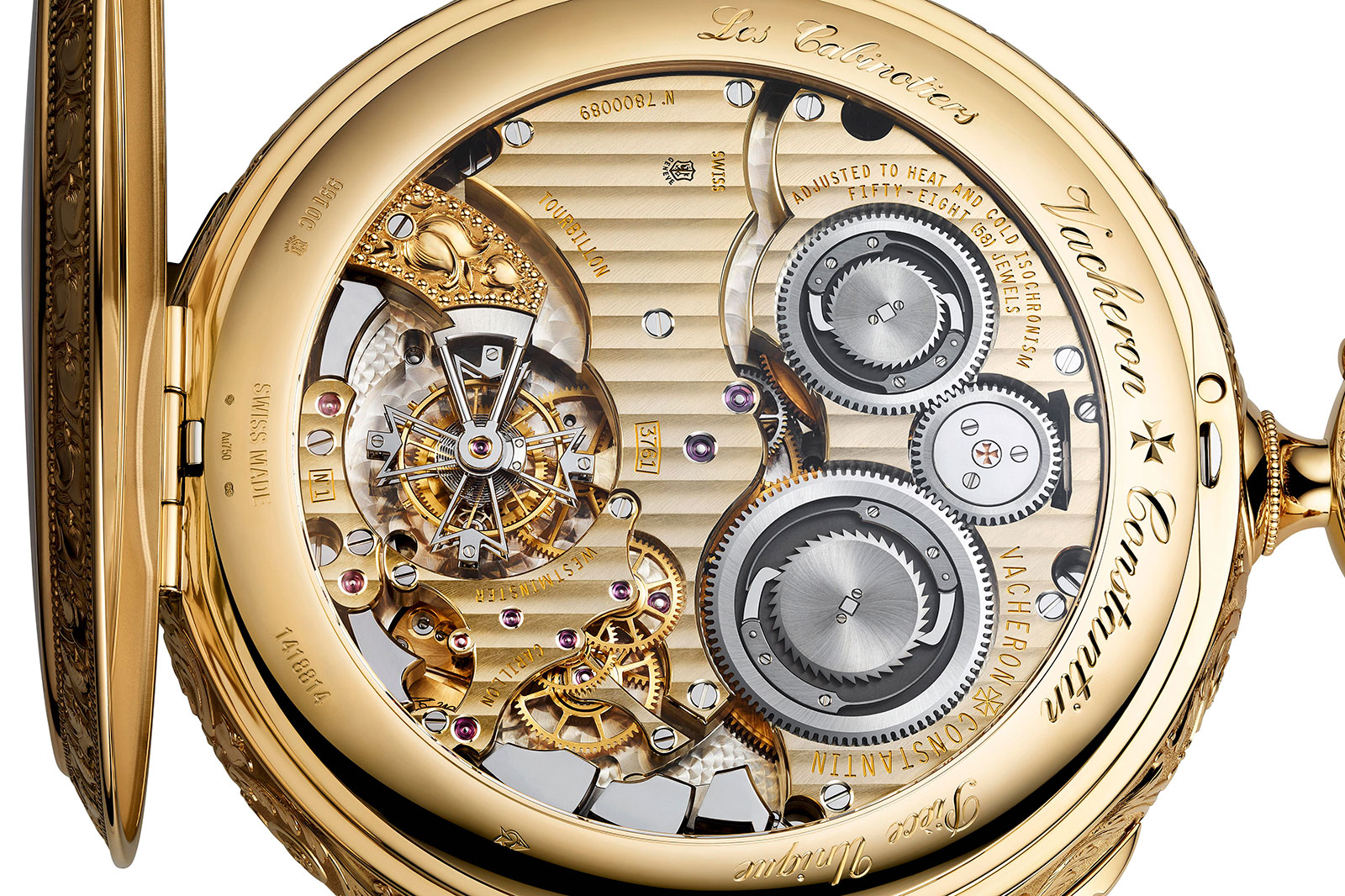 The miniature enamel on the reverse of the watch was specifically commissioned by the owner, who decided on both the motif and the artist who would execute it.

One of the best-known paintings in Western art, Girl with a Pearl Earring was painted by Johannes Vermeer around 1665. Almost four centuries on the painting is famous enough that it has seeped into pop culture, appearing in films and books. In the eyes of the owner – who already possesses several examples of exceptional historical pocket watches with Geneva enamel – capturing the magic of the painting was a feat that only one enameller in Switzerland could accomplish, Anita Porchet. 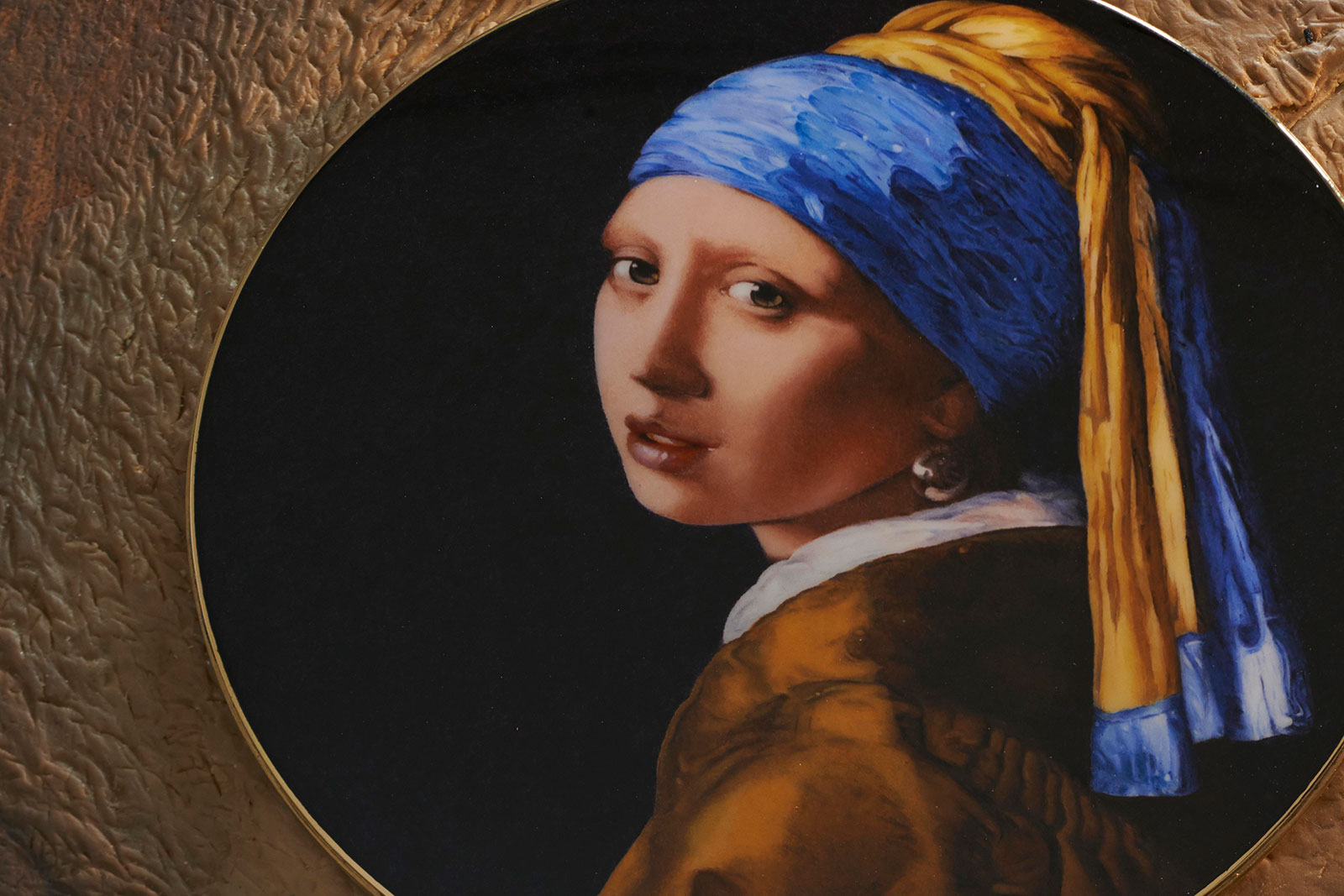 Arguably the most famous enameller in Swiss watchmaking today, Anita Porchet is one of the heirs to the grand tradition of enamelling in Geneva, which is still regarded as the best in Switzerland. Her name ranks alongside those of past legends like Carlo Poluzzi (1899-1978), Marthe Bischoff (1900-1991), and Suzanne Rohr (b. 1939), who taught Ms Porchet the craft.

As with expert Ivan Ponzo explained in his 2016 article published on SJX Watches, “the Geneva school of enamelling refers to painted enamels covered with a fondant layer – transparent and uncoloured enamel that protected the work of art below.” From her workshop in Corcelles-le-Jorat, about an hour from Geneva, Ms Porchet took two years to finish the painting. The process started with research into the enamels necessary and trial runs, before the painting was finally completed in 2020.

And as with all work done entirely by her – she employs a handful of craftspeople – the miniature painting is signed “A. Porchet”, along with the years it was in progress “2018-2020”. 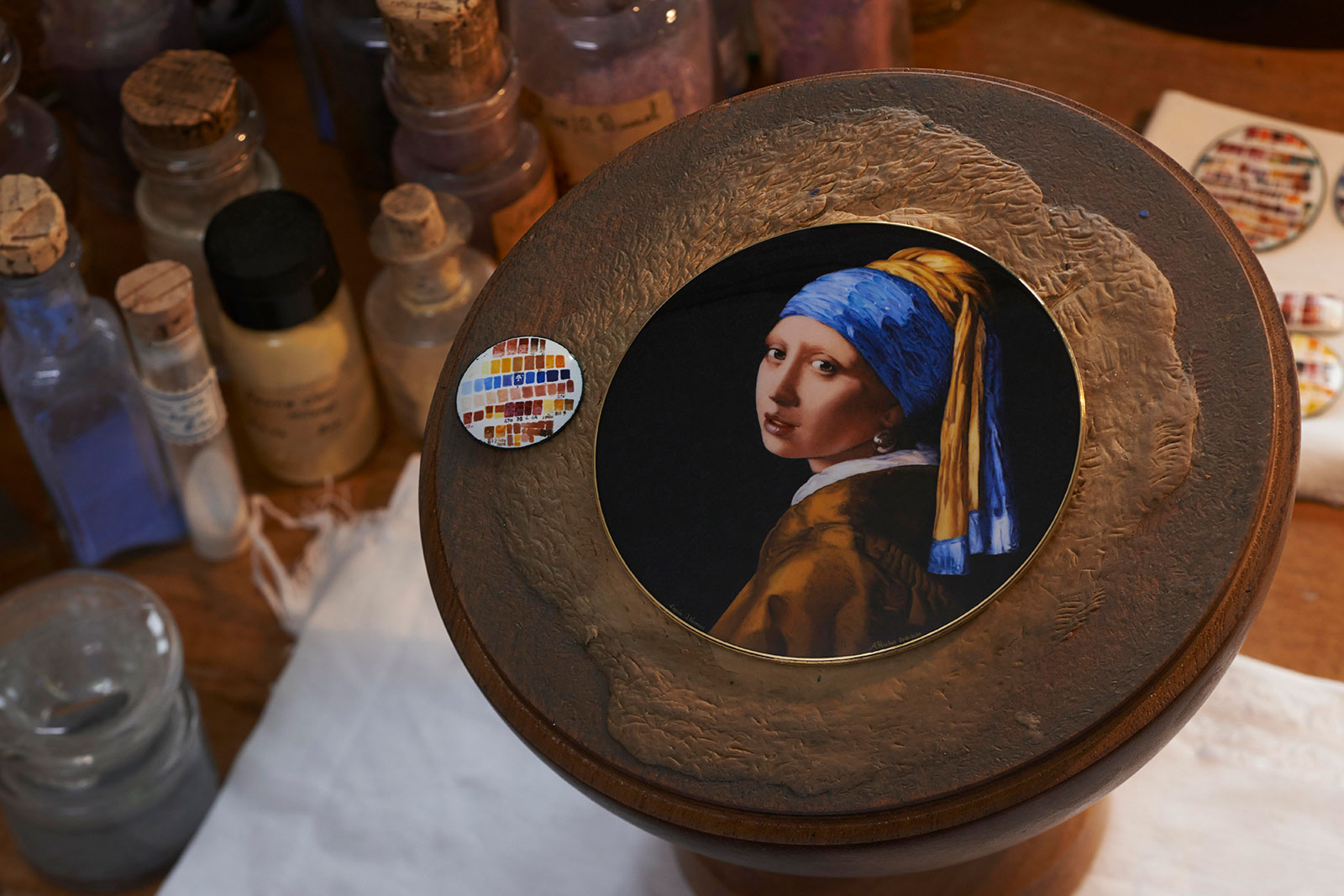 The dial of the watch is also fired enamel, but produced by a specialist dial manufacturer. It’s an eggshell colour and matched with dark blue markings, along with gilded hands.

Despite all the precious materials found on the case and dial, the size of the watch meant the hands are correspondingly long – the minute hand is 35 mm, making it as lengthy as some watches are wide. Consequently, solid-gold hands were out of the question. So the hands are made of pfinodal, a lightweight alloy of copper, nickel, and tin. Grandly complicated yet restrained in terms of aesthetics, the cal. 3761 within the Vermeer pocket watch is “pure time-only” in the words of the owner – at least on the dial. The calibre shares some of the fundamental architecture of the Reference 57260 of 2015, a monumental pocket watch with 57 complications that’s the most complex portable timepiece ever.

The primary complication of the cal. 3761 is a grande and petite sonnerie with Westminster chime, meaning it chimes the time as it passes with the quarters being sounded by the same sequence of notes as Big Ben in London. Consequently, the movement boasts five pairs of hammers and gongs to sound the required notes for the Westminster chime, instead of the three in an ordinary striking watch. 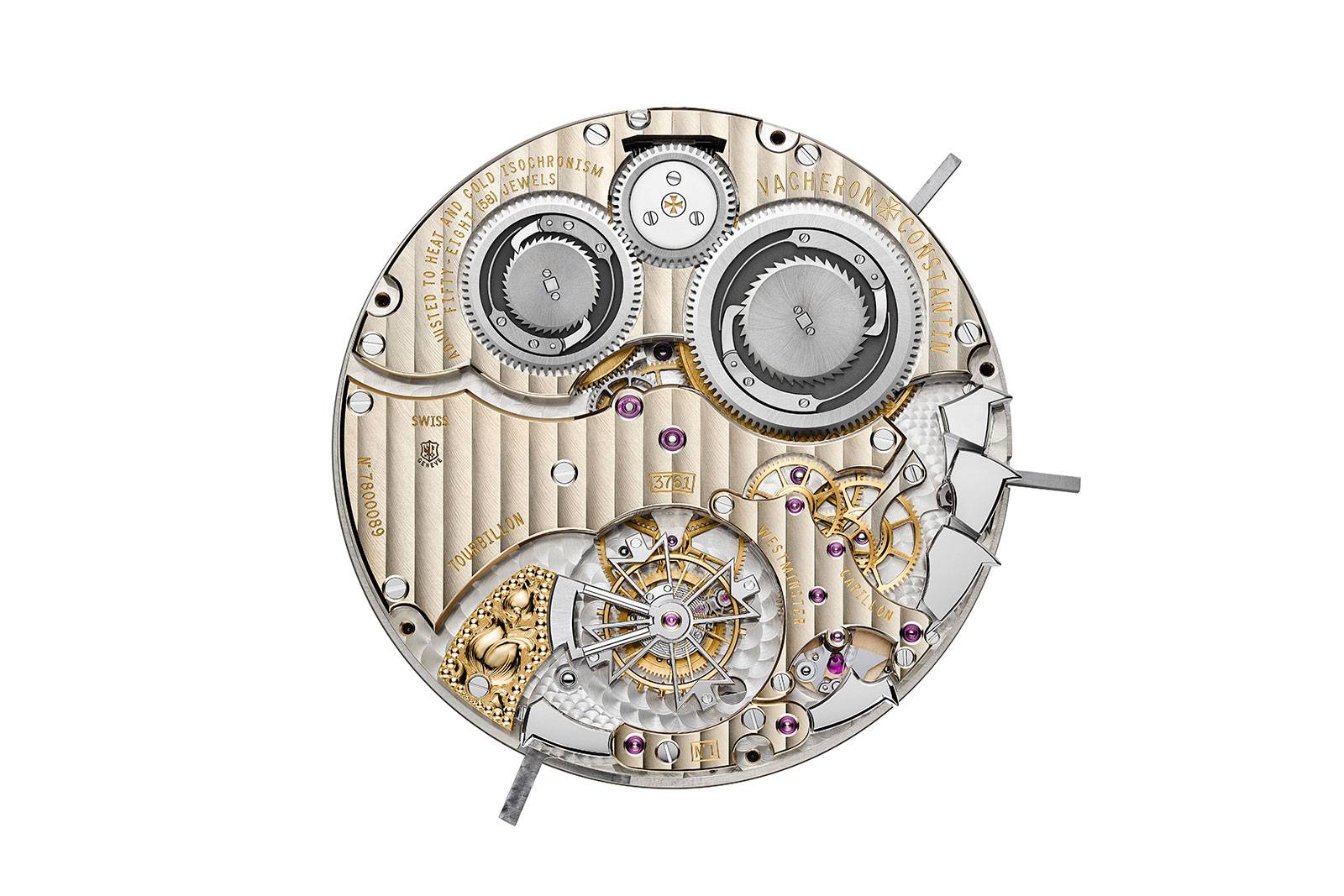 In full-strike mode, the watch chimes the hours and quarters every quarter. Like Big Ben – and contrary to a typical striking watch – the sonnerie strikes the quarters followed by the hours.

And in small-strike mode it will only sound the quarters on the quarter, but also the hours at the top of each hour. Unusually, the watch also has a “night silence” mode that deactivates the sonnerie en passant from 11 pm to 9 am. The immensely dense strike-work under the dial

And the movement is also equipped with a tourbillon regulator, although it is not a complication strictly speaking.

Nonetheless, the tourbillon is gorgeous in style and finish. The cage takes the form of a Maltese cross with remarkably narrow arms, while the tourbillon bridge is impeccably rounded and black polished. And in a gentle flourish, the tourbillon cock is solid gold and engraved with tulips, echoing the decoration on the case. 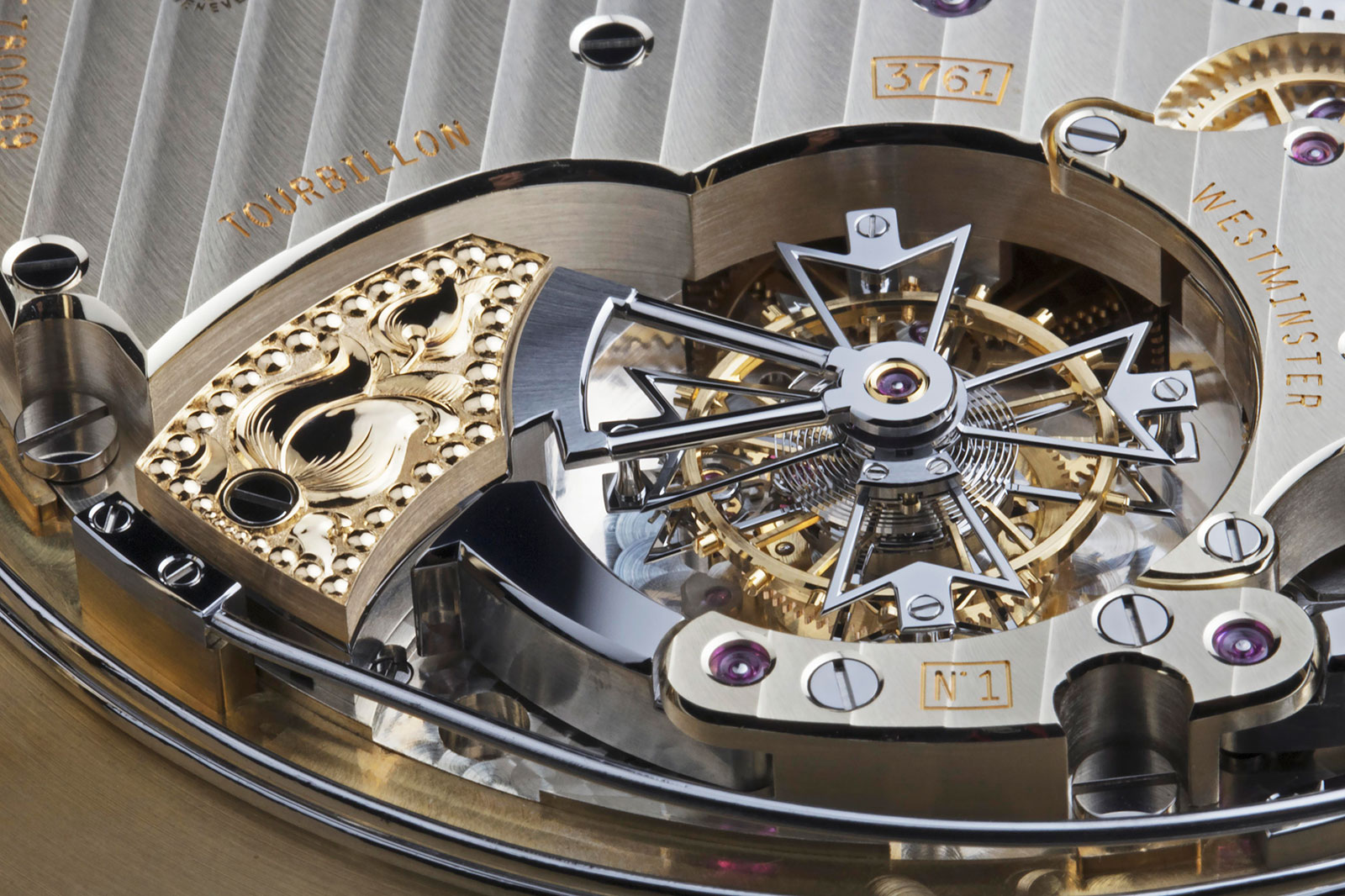 Needless to say, the finishing on the entire movement is as fine as on the tourbillon regulator – a consistency of haute de gamme finishing specified by the owner.

A case in point are the trio of wheels visible on the barrel bridge – the crown wheel that’s flanked by the barrel ratchet wheels for each of the twin barrels (one for the time and the other for the sonnerie). The wheels were first frosted then radially grained, which was then followed by mirror polishing of all faces of the teeth – the finishing for the three wheels took a week.

In fact, the finishing of the cal. 3761 is perhaps slightly more elaborate than that of the Reference 57260, something obvious only in the finest details of the movement, like the tourbillon bridge for instance. Made of lustrous 18k yellow gold, the case of the Vermeer pocket watch is a massive 98 mm wide and 32.6 mm thick – resulting in ample real estate to show off the relief engraving executed by Vacheron Constantin’s in-house engraver. The motifs that cover almost every surface of the case are inspired by the painting depicted on its back. Tulips repeat across the bezels and case side, along with acanthus leaves, a recurring theme in classical European engraving. More unusual is the “pearl” border on both bezels, a reference to the titular painting. Flanking the tulips that circle the bezel, the double border is made up of tiny spheres just 0.8 mm in diameter. The bow is made up of twin roaring lions, while the bezel is engraved with acanthus leaves and tulips