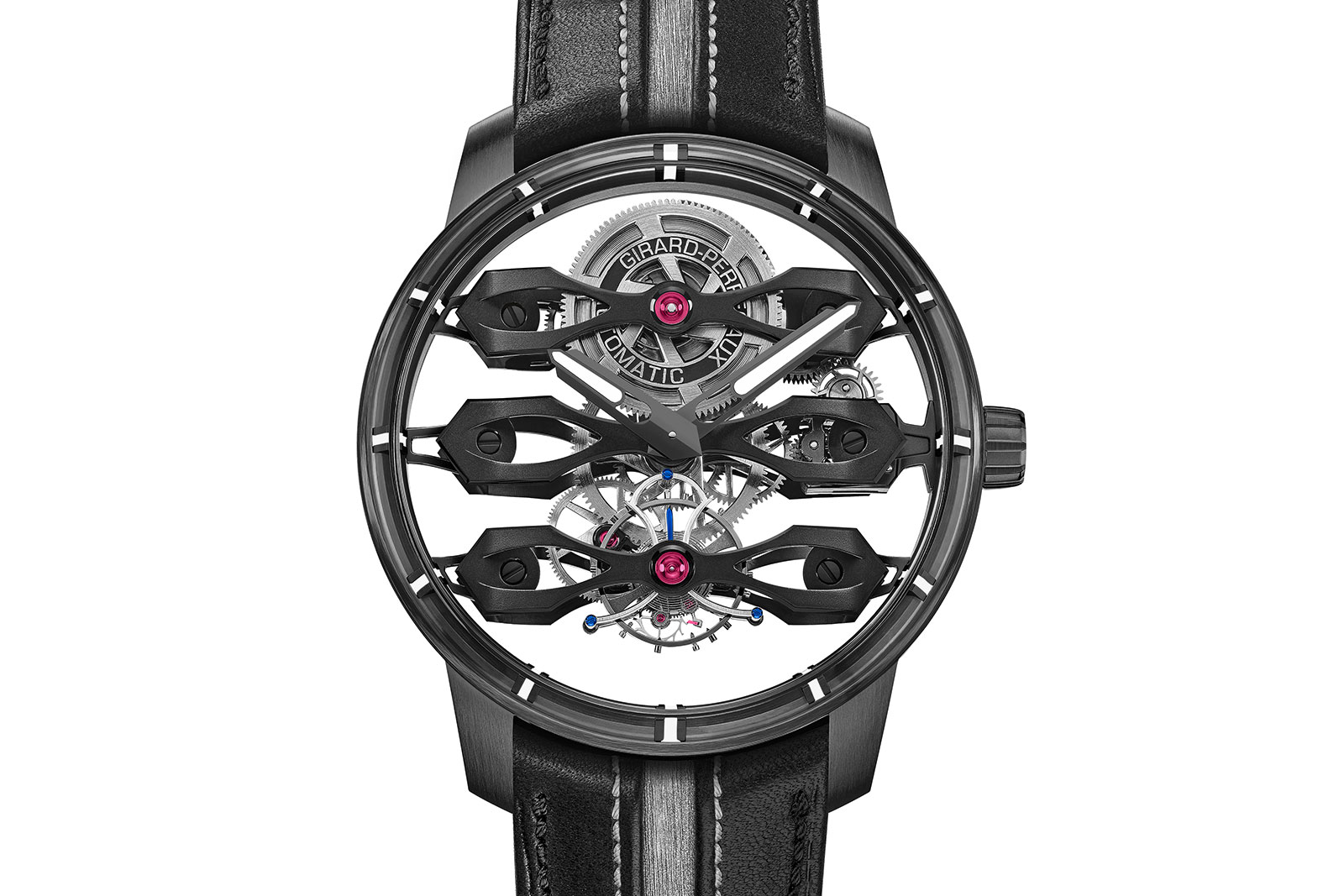 Earlier this year, Girard-Perregaux announced a new partnership with Aston Martin, most famous for being the carmaker of choice for James Bond. The watchmaker also signed on as a sponsor of the Aston Martin Cognizant Formula One racing team, but a collaborative watch was absent, until now.

Girard-Perregaux has just taken the covers off the inaugural watch of the partnership, the Tourbillon with Three Flying Bridges – Aston Martin Edition, a sleek, modern interpretation of the watchmaker’s signature complication. 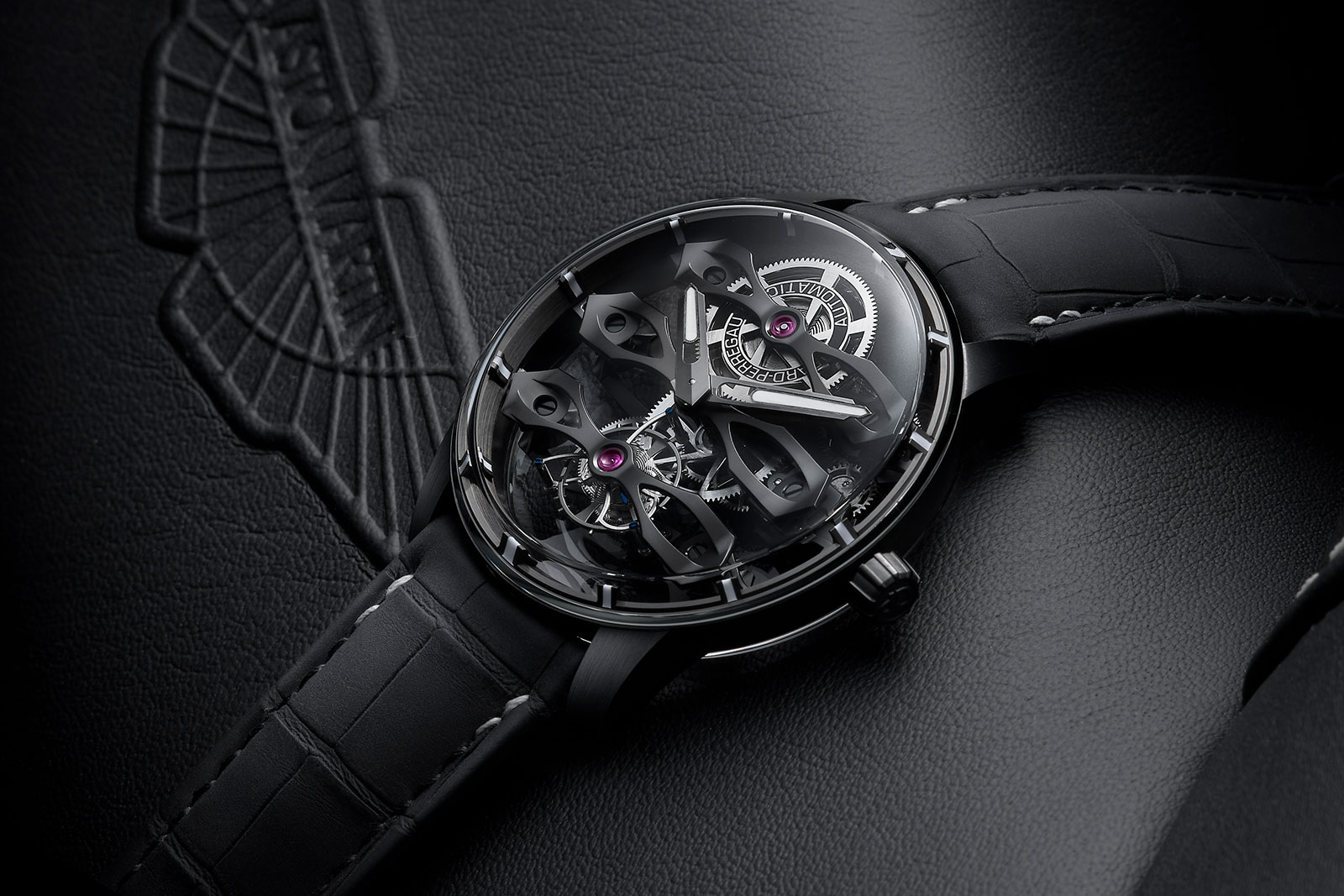 When the partnership was first revealed, the first watch that came to mind was an auto-racing chronograph on an integrated bracelet, making the all-black tourbillon a bit of a surprise. But the integrated-bracelet sports watch is now commonplace, so I am glad Girard-Perregaux went with the Flying Bridges tourbillon, a complication unique to the brand.

The tourbillon movement is, of course, an evolution of the brand’s iconic Tourbillon with Three Gold Bridges that was invented in the mid-19th century and found in Girard-Perregaux’s finest pocket watches, including one that was sold to the then President of Mexico, the famous “La Esmeralda”. 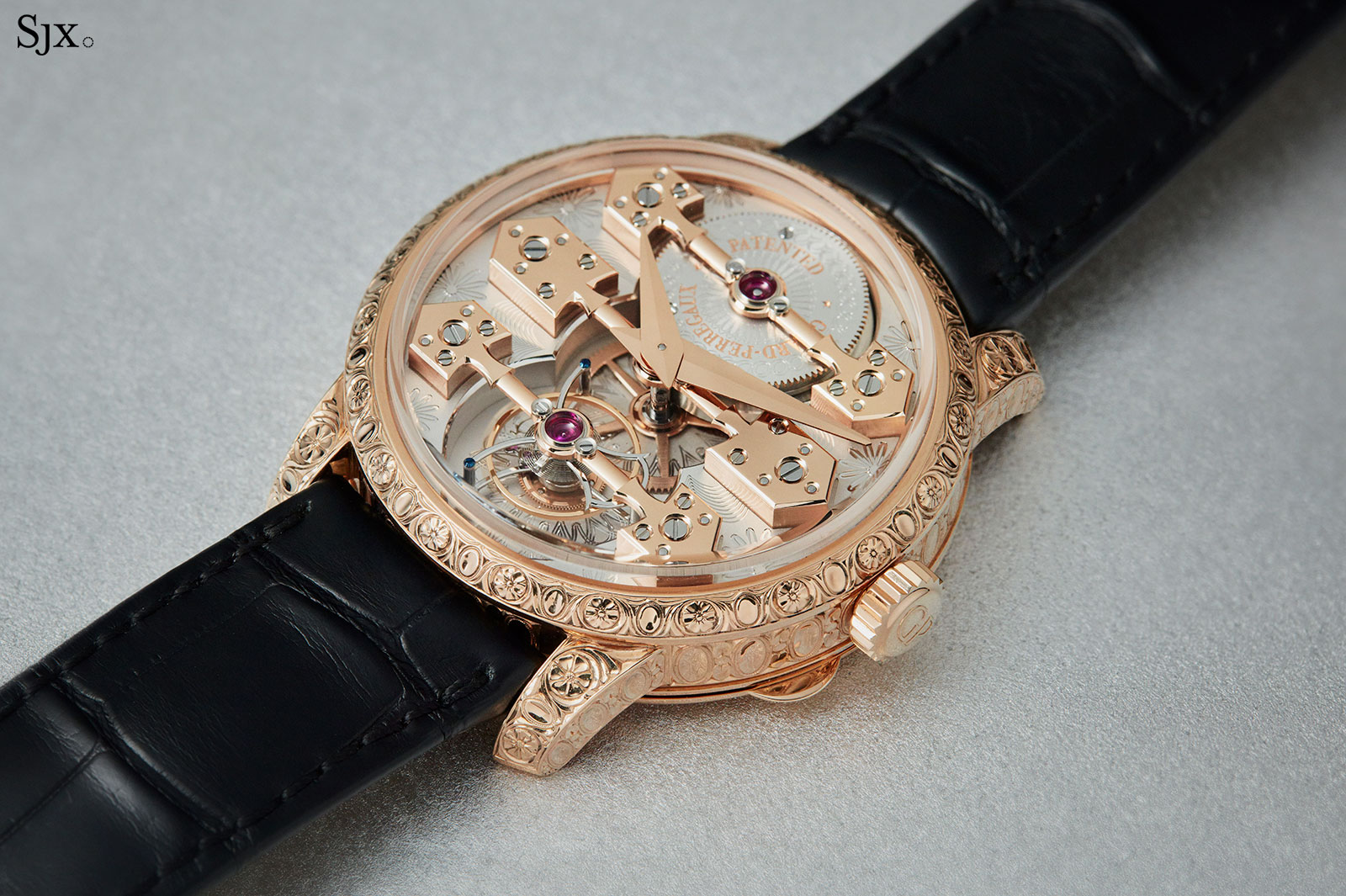 That said, the Aston Martin edition isn’t entirely new – the watch is actually based on the Neo Tourbillon with Three Bridges launched in 2018, but the new movement has been skeletonised even further, hence the “Floating” bridges. The movement retains the trademark symmetrical layout of the traditional Three Gold Bridges, but has now been reimagined to be aerodynamic and modern in more ways than one. 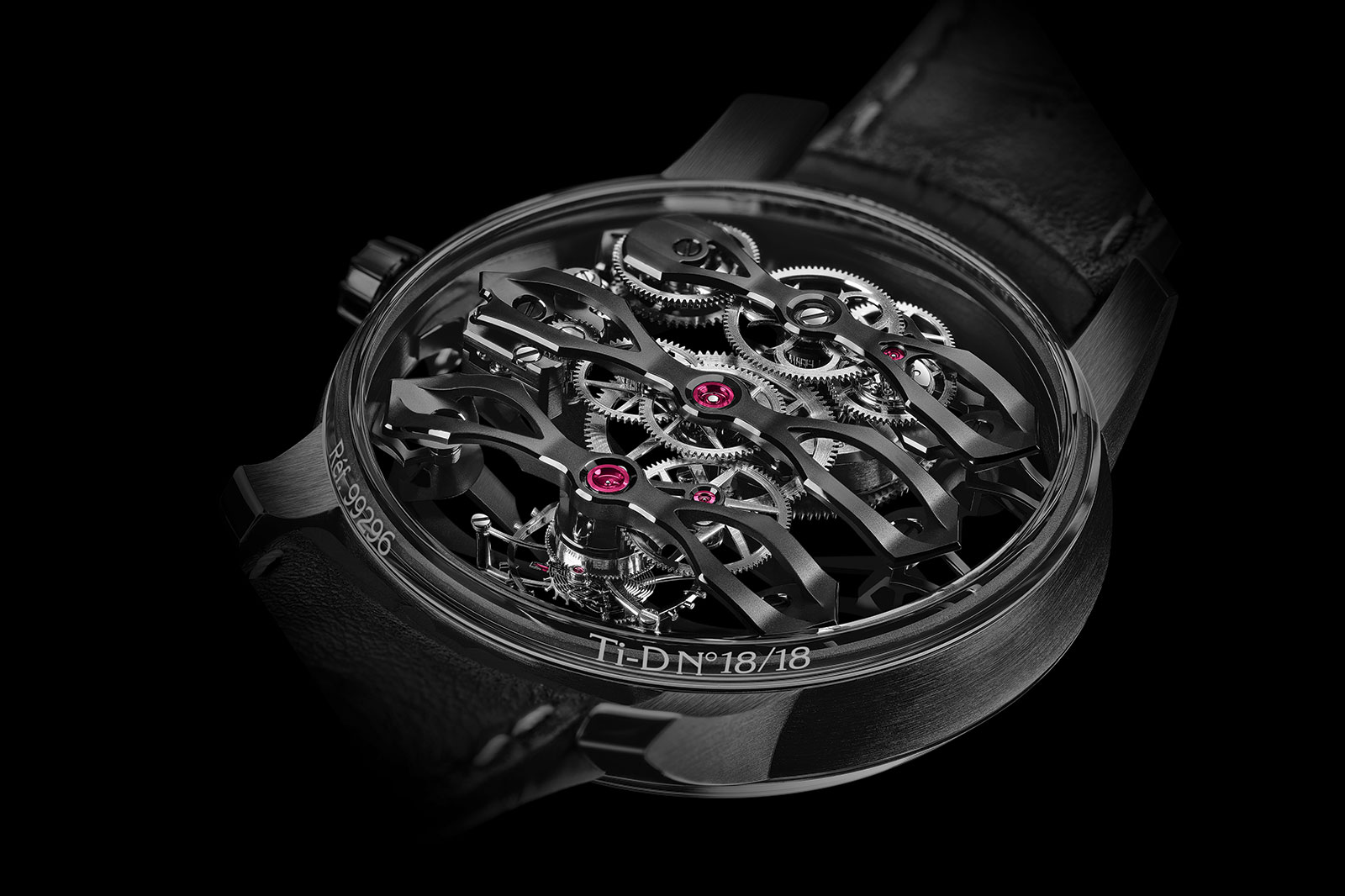 First, the case as well as the movement bridges are titanium coated with diamond-like carbon (DLC). And the style of the movement has been revamped, with streamlined, flowing bridges and maximum skeletonisation to create floating, organic forms.

While the watch and movement are impressively executed, something a bit more novel would have made a bigger impact as the partnership’s first model. Perhaps it’s just because the British carmaker has other issues to deal with as its tie up with Girard Perregaux comes as it embarks on a fresh start, having been rescued by fashion tycoon Lawrence Stroll last year. Partnerships between automakers and high horology watchmakers do typically result in all-new models and movements, so the two brands likely have something else in the pipeline. 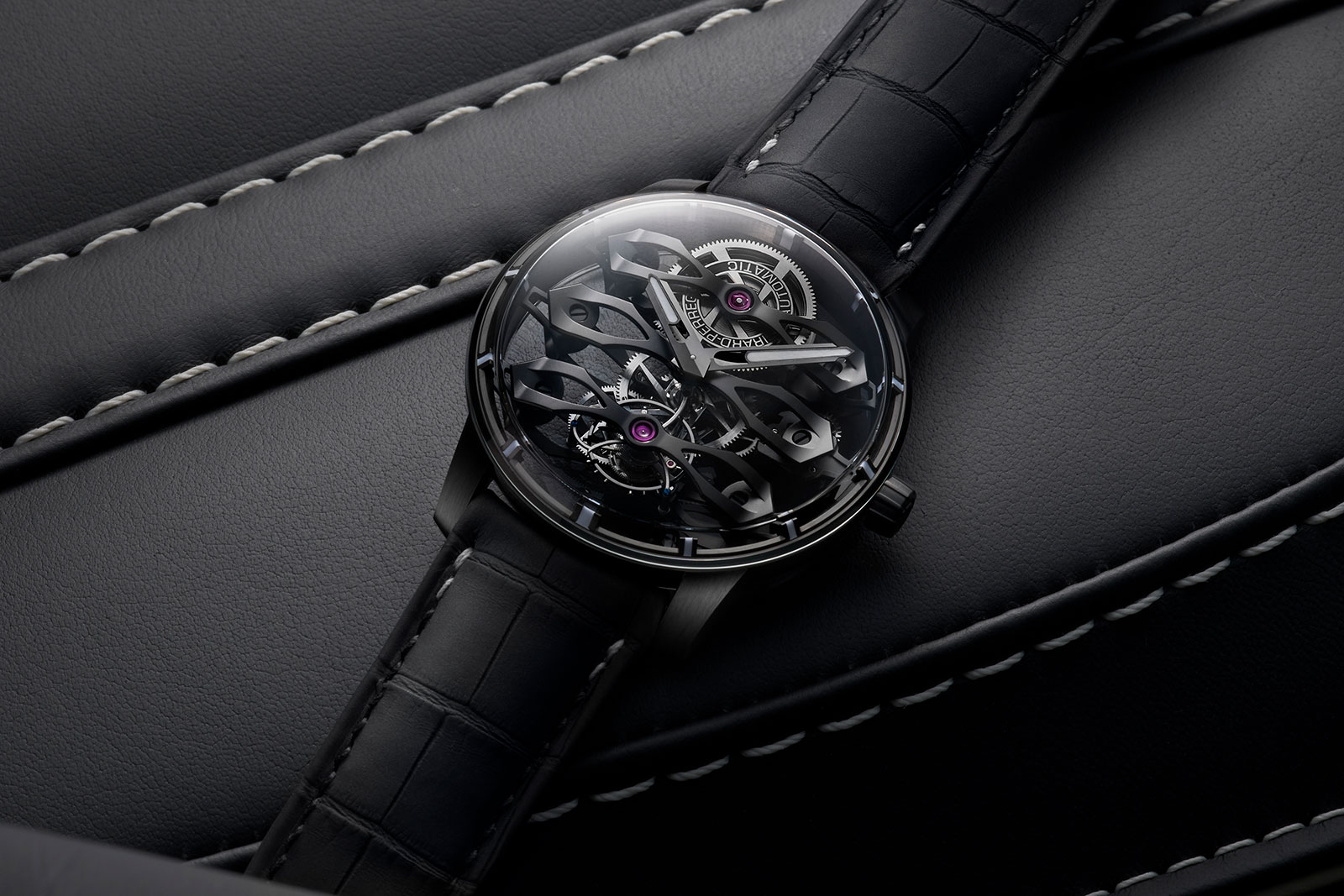 Classic with a twist

A large but lightweight watch, the Tourbillon with Three Flying Bridges is 44 mm wide and 15.52 mm high. But its effective height is significantly less, because much of its thickness is due to the highly domed sapphire crystals on the front and back.

A crucial part of the movement’s visual presentation, the “box type” sapphire crystal rises upwards from the case, allowing for a panoramic view of the calibre, even from the side.

At the same time, the height of the crystal allows for vertical hour markers that stand parallel to the plane of the dial. Each hour marker contains a block of Super-Luminova resin for excellent nighttime legibility, but because the markers are vertical, they do not obscure any part of the movement. 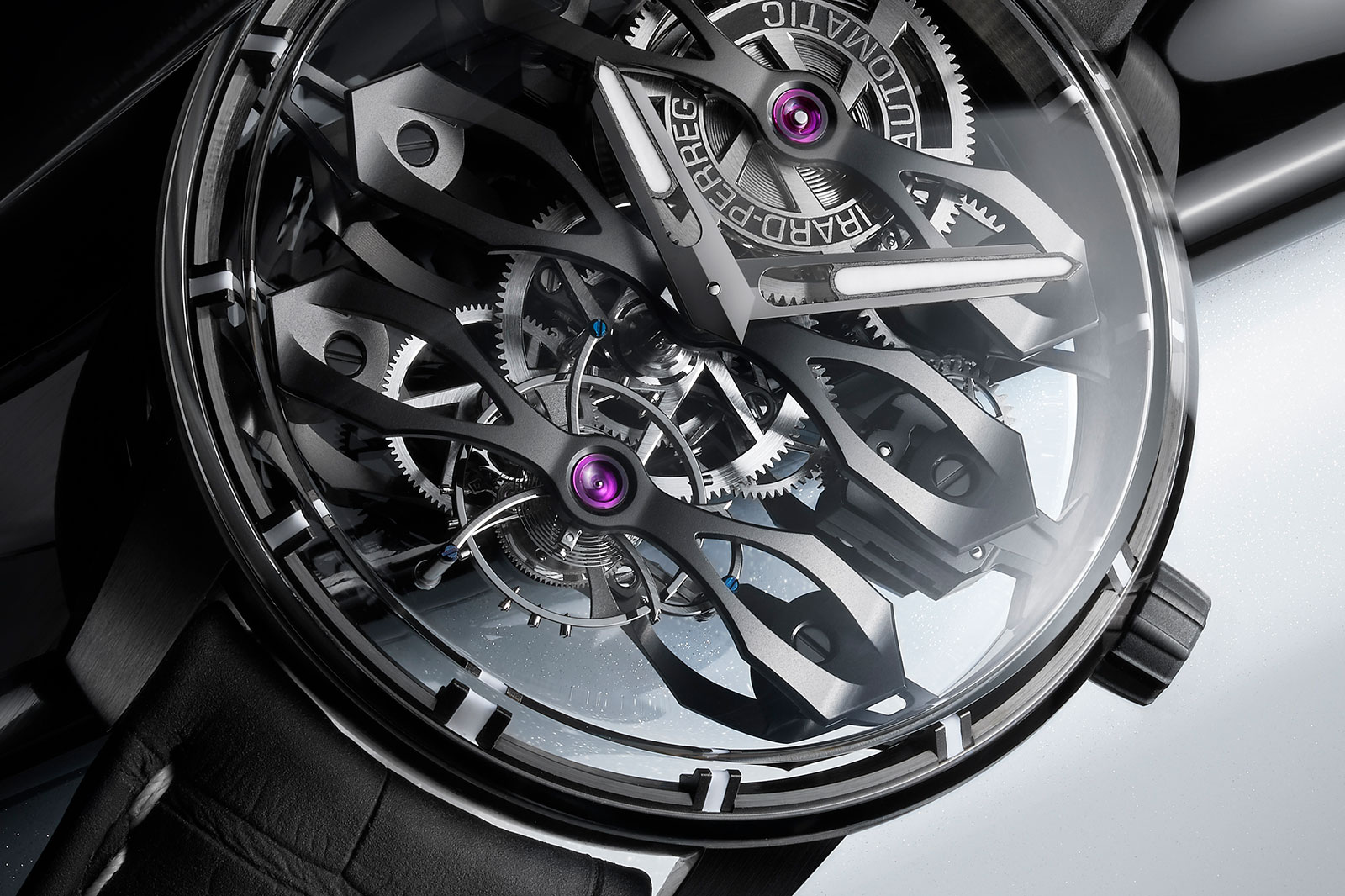 While seemingly simple in form – being maximally skeletonised – the Flying Bridges tourbillon is actually automatic. The uppermost bridge holds the barrel, which smartly hides a compact micro-rotor of 18k white gold.

Though camouflaged by the barrel, the micro-rotor is clearly visible at an angle – and in the dark. Its outer edge is engraved “Aston Martin”, which is then filled with luminescent material that’ll glow in the dark. 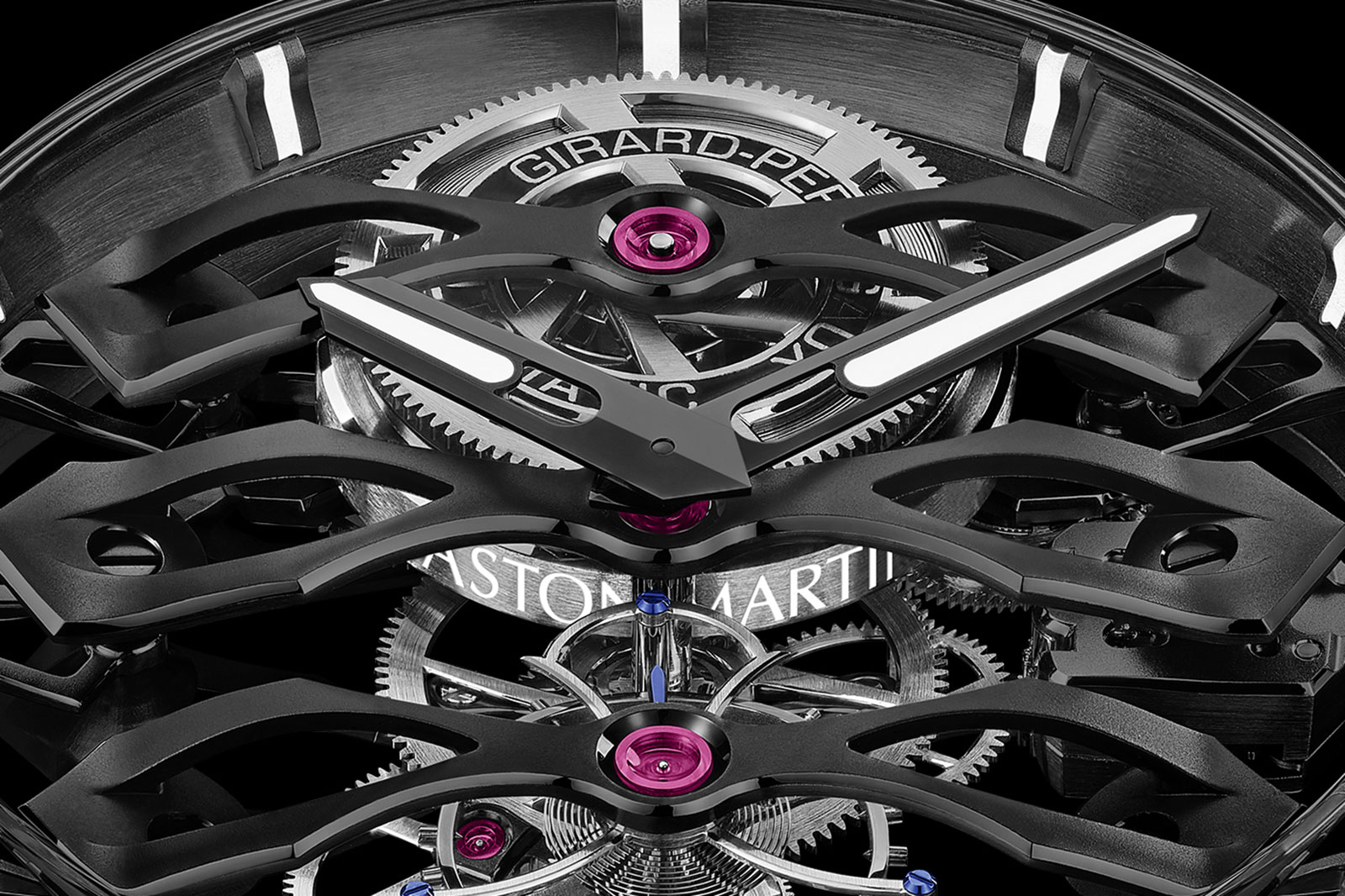 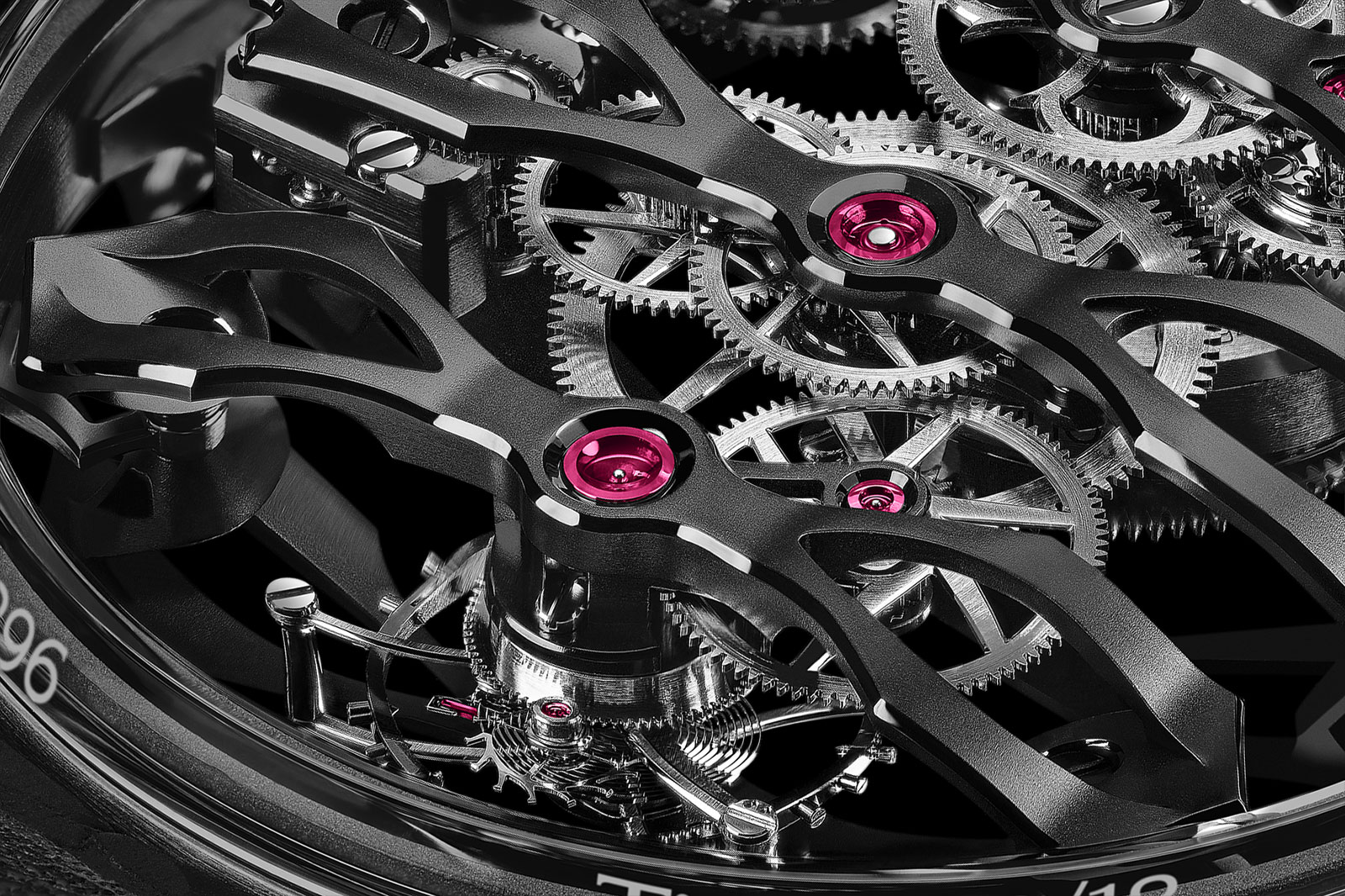 The second bridge in the middle supports the hands as well as the gear train, while the third bridge at six o’clock carries the tourbillon. Notably, the base plate that supports the bridges in the Neo Tourbillon has been removed, enhancing the levitating effect and leaving the bridges only anchored on each end. 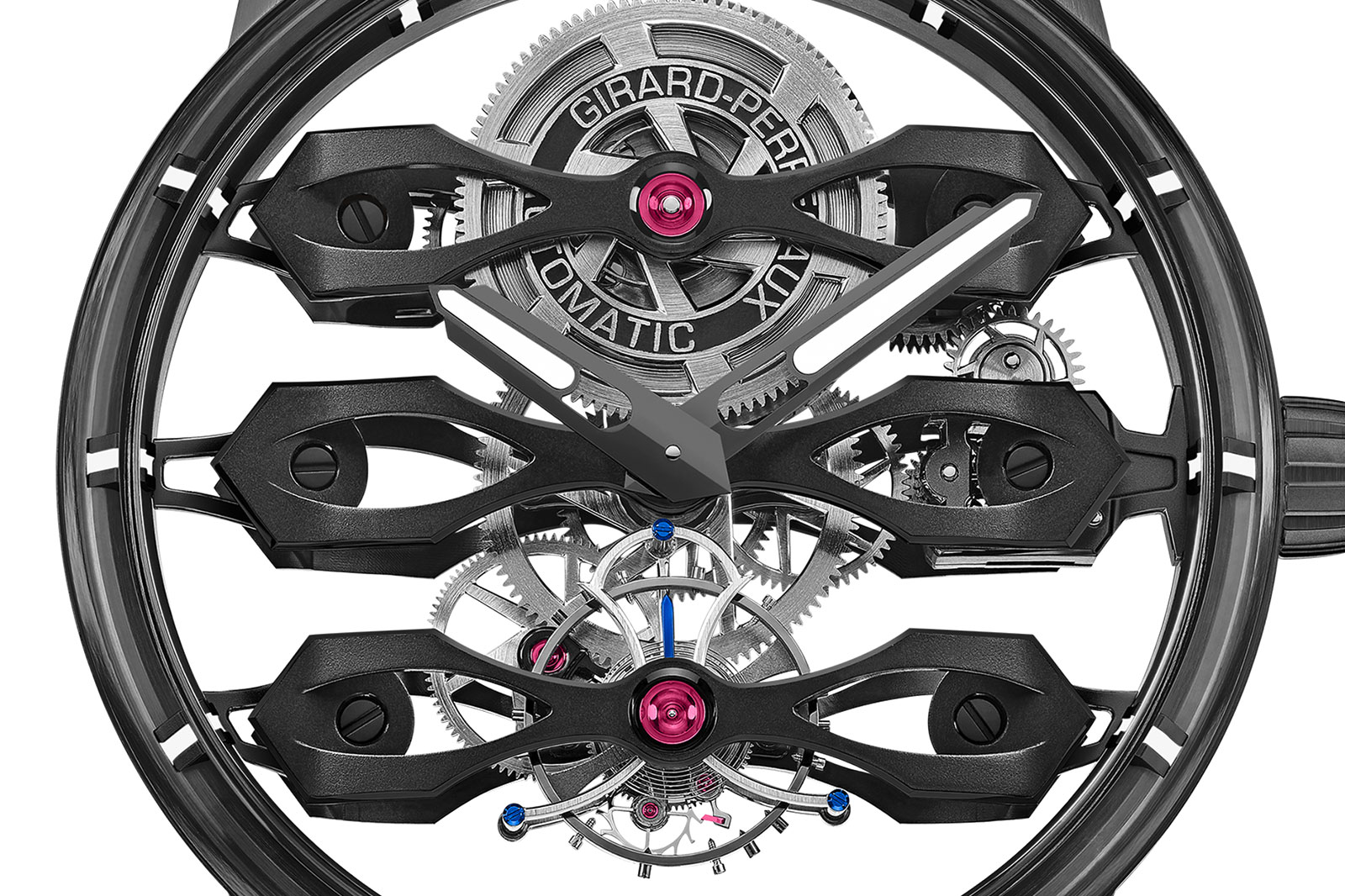 Last but not least, the watch is delivered with an extra strap of calfskin strap with a silver stripe down its centre. Named Rubber Alloy, the stripe is an insert of “injected white gold on rubber”, essentially rubber coated in white gold, an industry first that injects a bit of flair into the monochromatic look.

Girard-Perregaux Introduces the Place Girardet, with a Single Gold Bridge and No Tourbillon

Conceived to mark Girard-Perregaux's 225th anniversary, the Place Girardet features the brand's signature gold bridge, with every watch of the limited edition fitted with a one-of-a-kind dial. Specs and prices below.