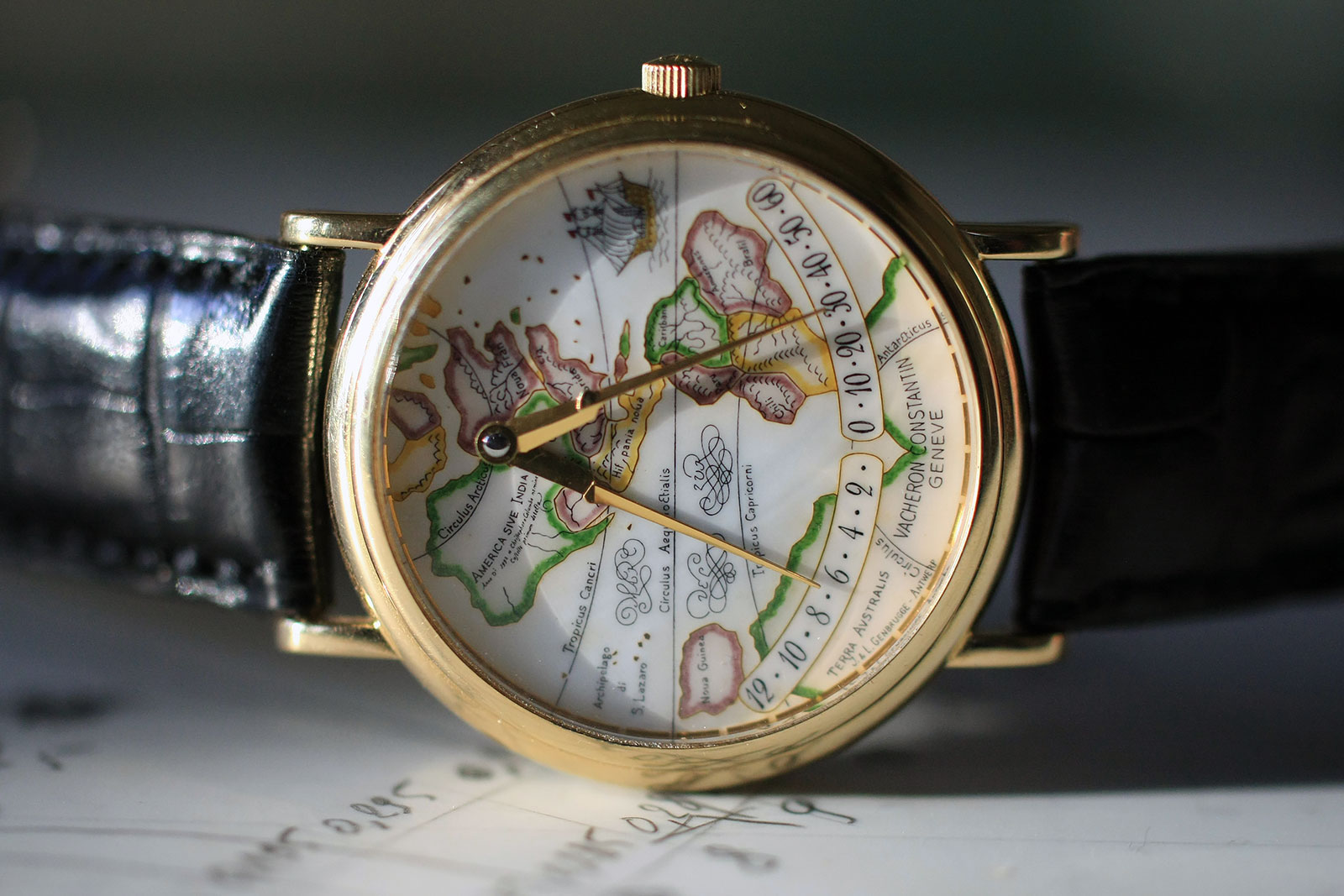 An unusual wristwatch with twin retrograde hands in the form of a compass, the Mercator was unveiled in 1994 for the 400th anniversary of the death of Gerardus Mercator (1512-1594). A pioneering cartographer famous for inventing the map projection that evolved into the world maps of today, Mercator was born in present-day Belgium, which is where the genesis for the Mercator wristwatch was formed.

The Mercator wristwatch was unusual amongst watches of the 1990s, being one of the rare handful of classically styled watches with an unconventional time display. At the same time, the fanciest versions of the Mercator watches featured hand-made fired enamel dials, which were rare at the time. The entry-level versions, in contrast, had acid-etched brass dials sporting similar motifs. 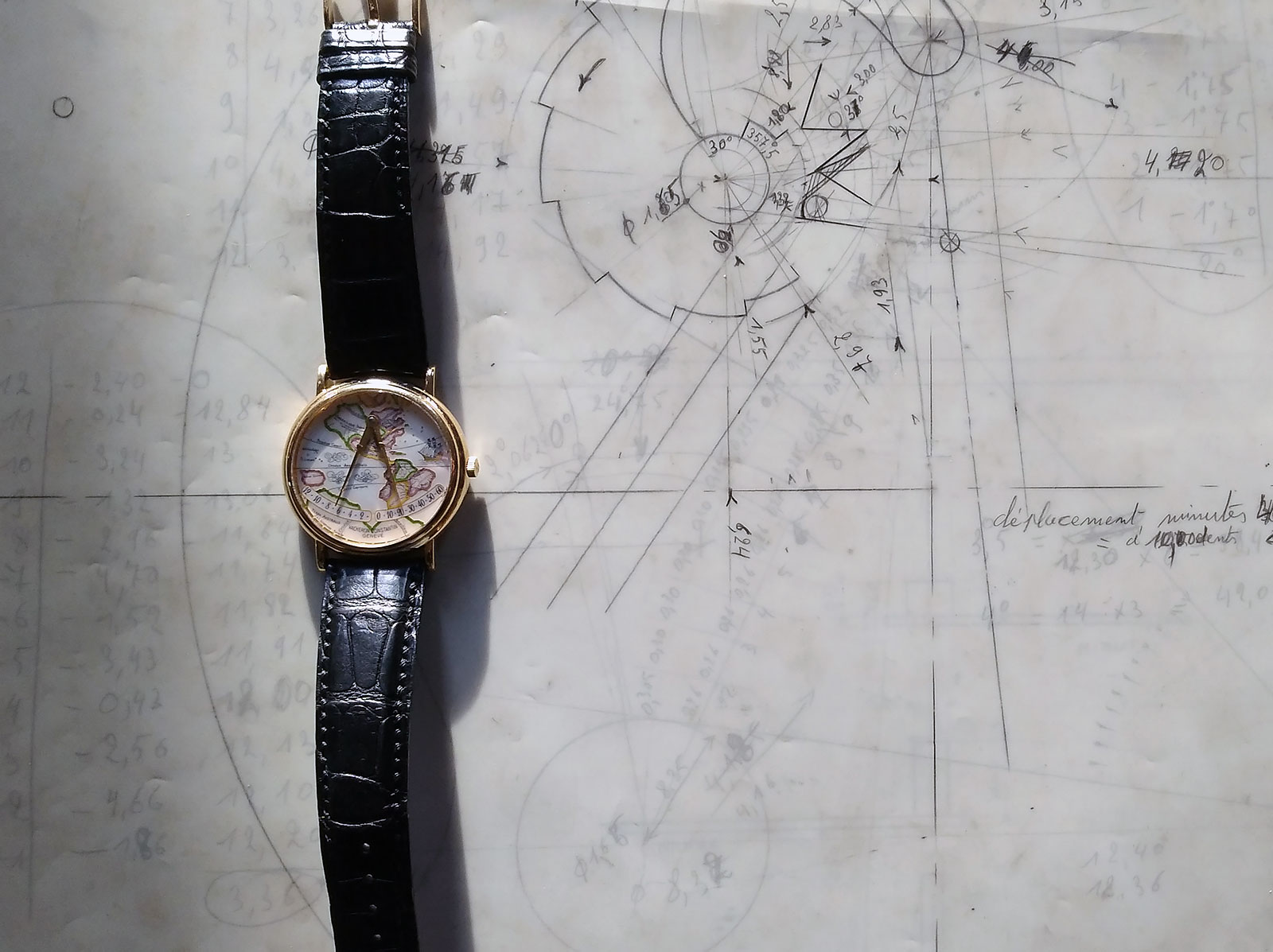 A tribute to the past

The Mercator watch was the brainchild of Jean Genbrugge, an artisan who, along with his wife Lucie, specialises in miniature enamel painting. Mr Genbrugge is also a watchmaker, which led him to invent the Mercator retrograde mechanism, while also devising the map-pattern dial as in a nod to his homeland’s famous son.

“I am a citizen of Antwerp like Mercator, and I have a great admiration for his scientific work,” recounts Mr Genbrugge, “When the 400th anniversary of Mercator’s passing took place in 1993, I visited the exhibition in honour of his life at the Mercator Museum in Sint-Niklaas.”

“Being a sailor, I am a navigator myself,” explains Mr Genbrugge, “Which gave me the idea to create a homage to Mercator – a special watch with an enamel dial showing the map Mercator created himself for the New World, or north and south America.” 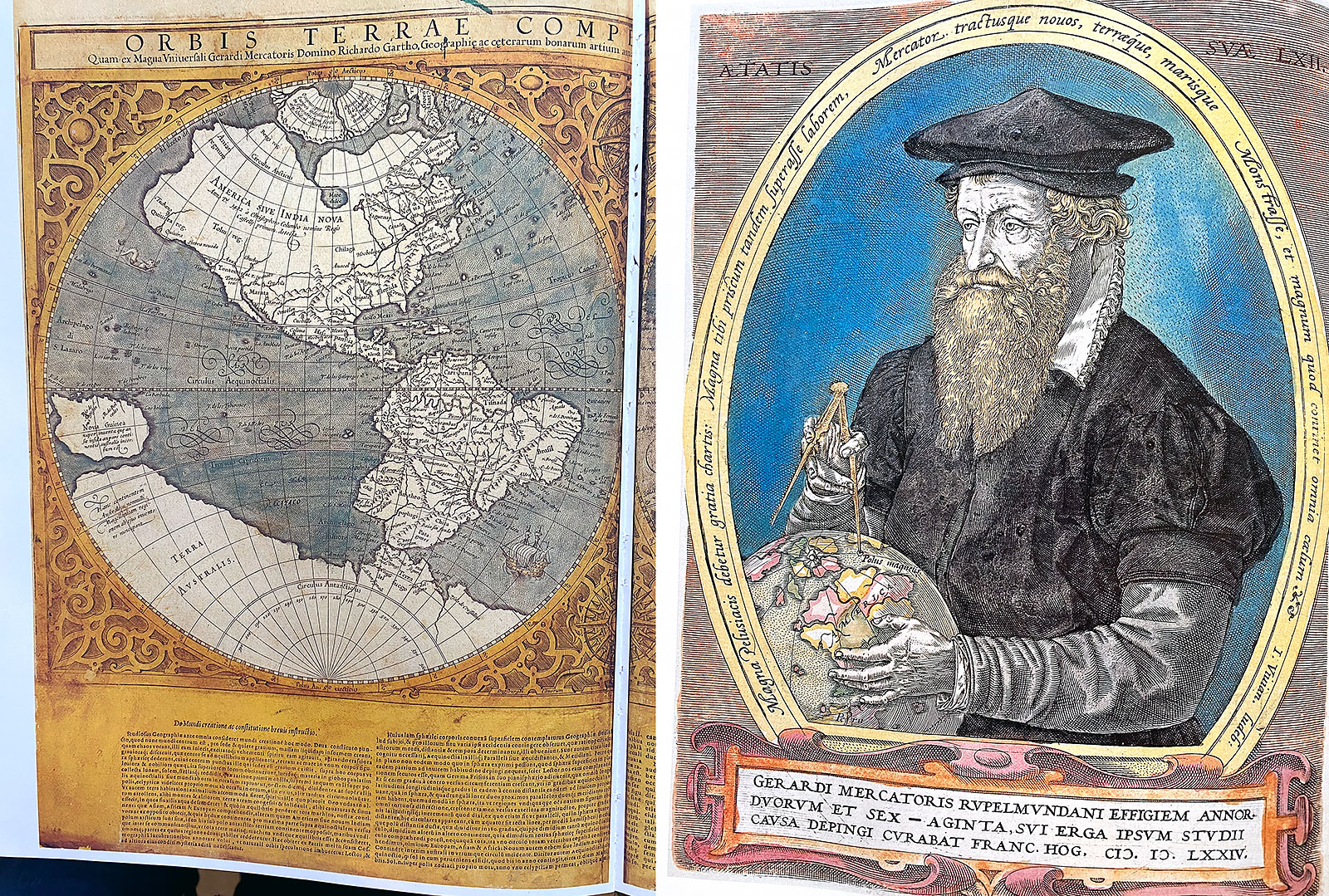 Two pages from a book about Mercator that Mr Genbrugge used as a reference for the project; the watch dial reproduces the map above. Photo – Jean Genbrugge

“My plan was to build a small series of watches for collectors, but after I spoke to my friend Helmut Crott, he suggested I contact Vacheron Constantin. Helmut had a good relationship with the head of VC then, Claude-Daniel Proellochs, so we went to present our project to him. Claude-Daniel was fascinated by the idea right away, and that started a longstanding and friendly relationship that lasted till the day Claude-Daniel left VC.”

The watch Mr Genbrugge built as a sample for Proellochs is the very first Mercator wristwatch prototype, the very watch pictured here. Now in his sixties, Mr Genbrugge is offering the prototype for sale, via a dealer in Luxembourg, along with the sketches and technical drawings for the movement and dial. 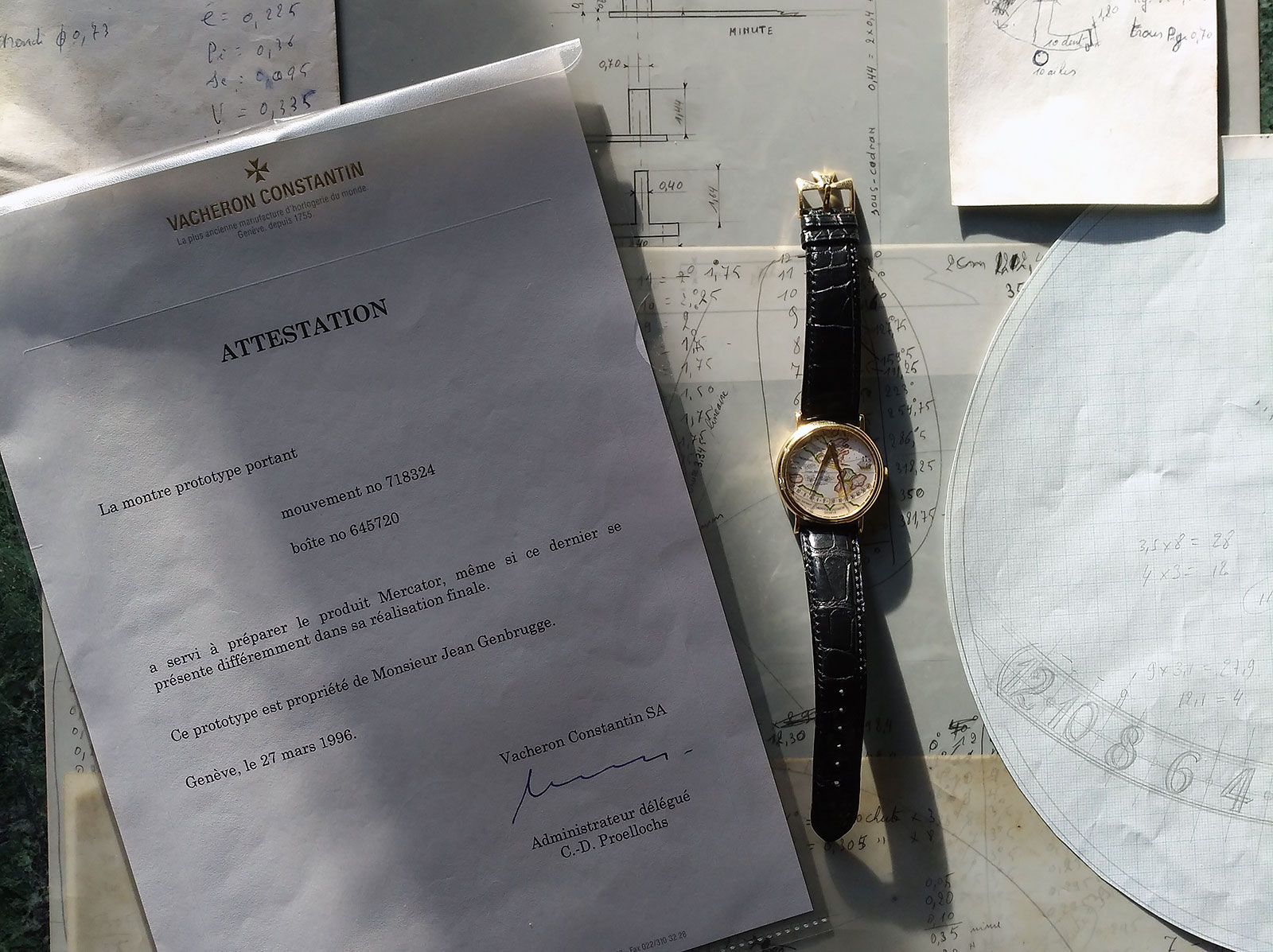 The watch and its associated documents

Using the Vacheron Constantin cal. 1120 as a base – derived from the Jaeger-LeCoultre cal. 920 and also known as the Audemars Piguet cal. 2120/2121 – Mr Genbrugge constructed a bi-retrograde mechanism that went on top of the base movement.

The subsequent limited-edition Mercator had an identical time display, but one driven by a retrograde mechanism modified by Vacheron Constantin for more efficient serial production. 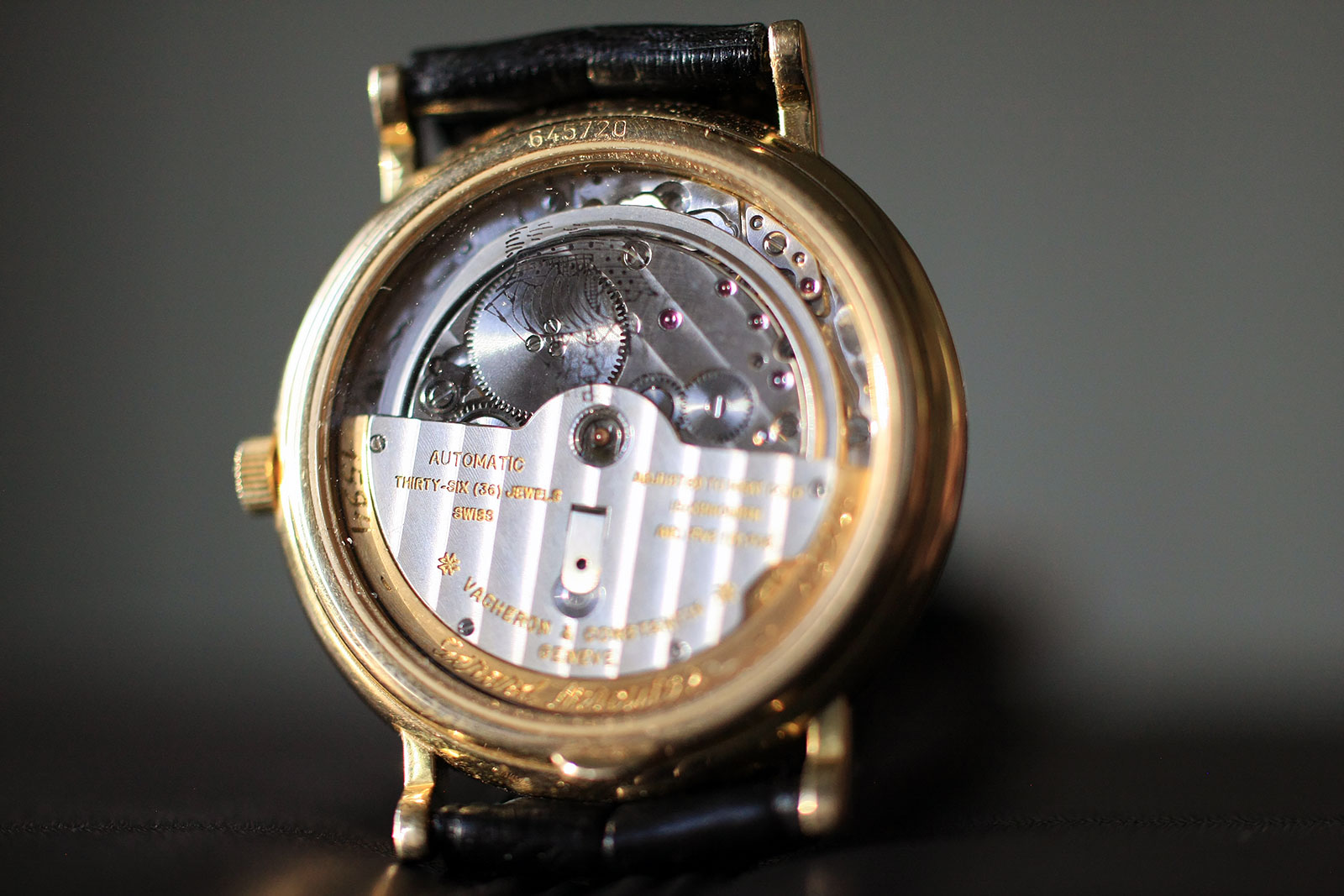 The cal. 1120 under the display back that was painted with a tiny sailboat by Mr Genbrugge, a detail absent on the production version

The gold case of the prototype is identical to that found on the Vacheron Constantin perpetual calendars of the period, making it distinct from the standard Mercator, which had a slightly more elaborate case featuring a stepped bezel and lugs with fluted edges.

Requiring some two months to produce according to Mr Genbrugge, the centrepiece of the watch is similarly unique on the prototype. Bearing Mercator’s famous world map in miniature enamel, the dial has subtle differences with the serially-produced version, including the artists’ signature, which reads “J.& L. Genbrugge – Antwerp” on the prototype, while the standard dial did away with the city name. 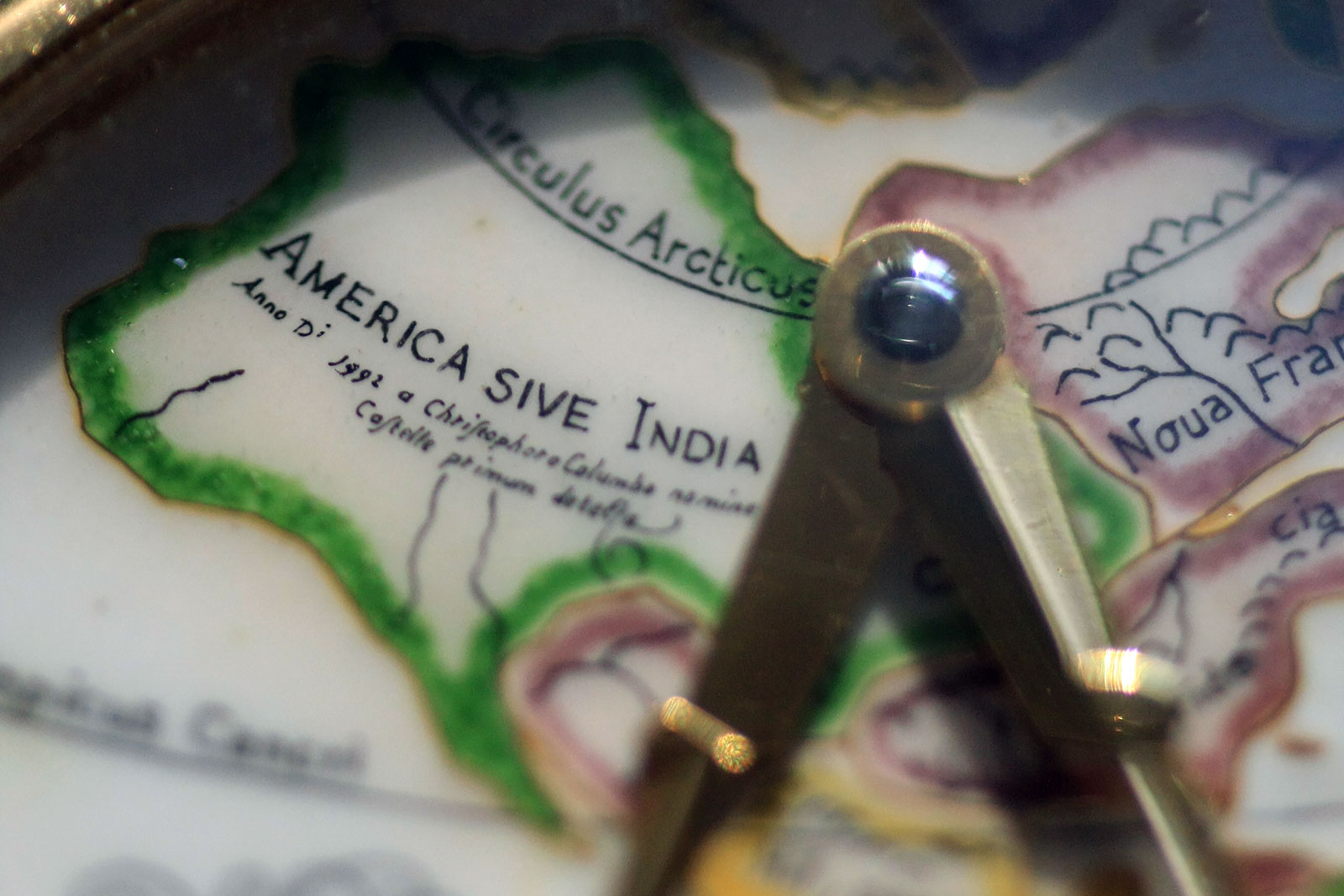 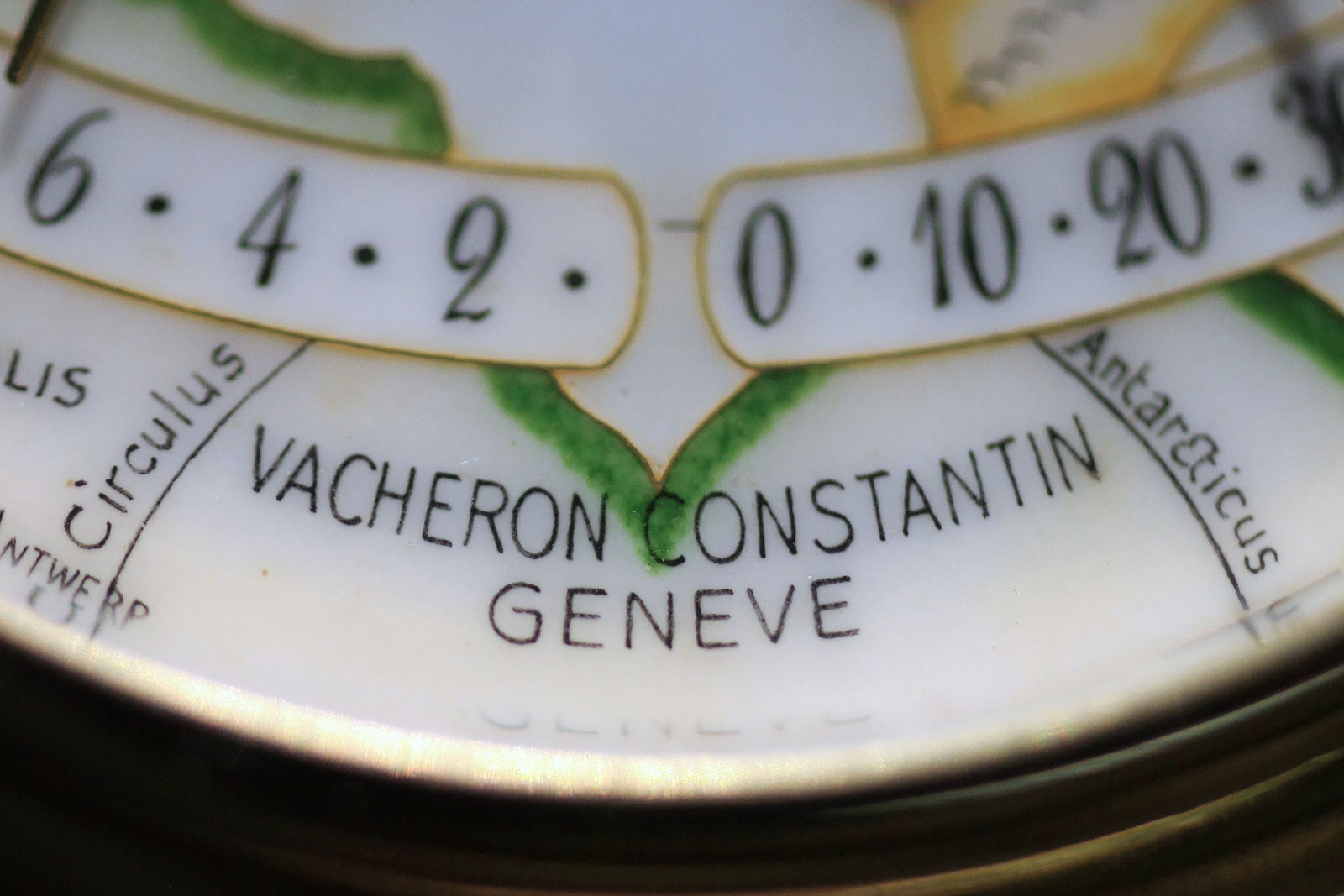 Importantly, the watch is accompanied by a letter signed by Claude-Daniel Proellochs, then the chief executive of Vacheron Constantin. Respected for having helped rebuild Vacheron Constantin after the Quartz Crisis, the late Proellochs led the company from 1988 until his retirement in 2005, which was also the year the brand celebrated its 250th anniversary in grand style.

Dated 1996, the letter notes that the Mercator in question is a prototype that was used to “develop the Mercator series, though the production model was different in its final form”. It ends by saying the prototype is the “property of Mr Jean Genbrugge”. 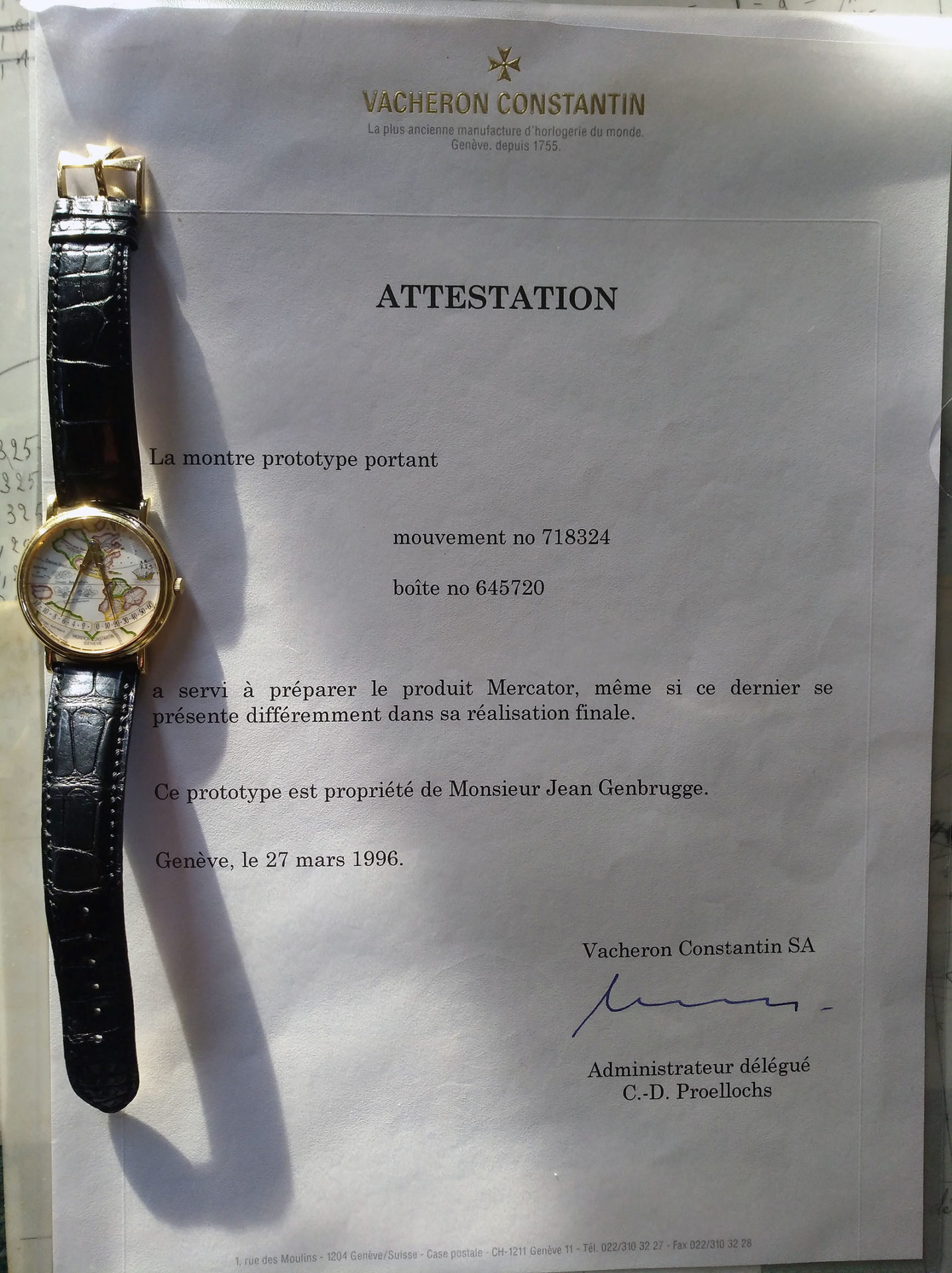 The success of the Mercator watch led the Genbrugges to become dial makers for a variety of watch brands, including Piaget and Bovet. They continue to do so today, producing hand-made enamel dials that are half the height of industrial average, at about 0.5 mm, compared to about 1 mm for the typical enamel dial.

The Mercator prototype has been consigned for sale at Watch Collector in Luxembourg by Mr Genbrugge, and priced at €175,000.

Addition March 11, 2021: Inclusion of comments and photos from Jean Genbrugge.