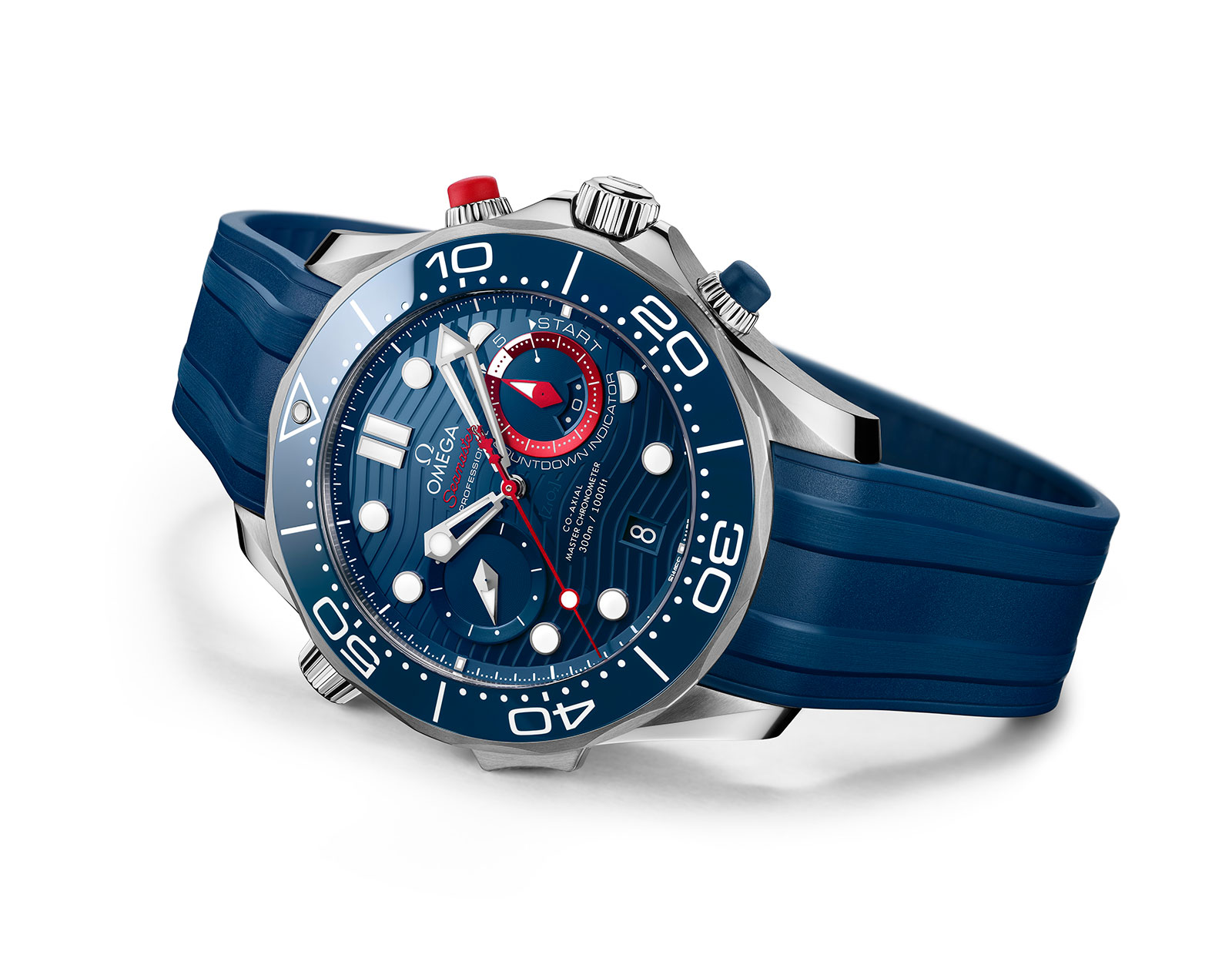 Yachting’s most prestigious race, the America’s Cup once again has Omega as its official timekeeper, for the first time since 2003. Omega is inaugurating its partnership with a special-edition Seamaster chronograph for the 36th America’s Cup, which will take place off the coast of New Zealand in March 2021. The Seamaster Diver 300M America’s Cup Chronograph is the second edition made for the 2021 America’s Cup; the first was a Seamaster Planet Ocean.

Omega loves special editions; some are appealing in theme and execution, while others are unimaginative. The new Seamaster chronograph falls squarely in the former category – it’s definitely more exciting than last year’s America’s Cup Planet Ocean, thanks to a few novel technical features.

While the America’s Cup edition retains the basic specs of the standard Seamaster Diver 300M Chronograph, it incorporates functions catered specifically for yachting, including a regatta countdown on the minute register. Most unusual is the “Chrono Lock”, a slide on the case side that prevents activation of the chronograph. 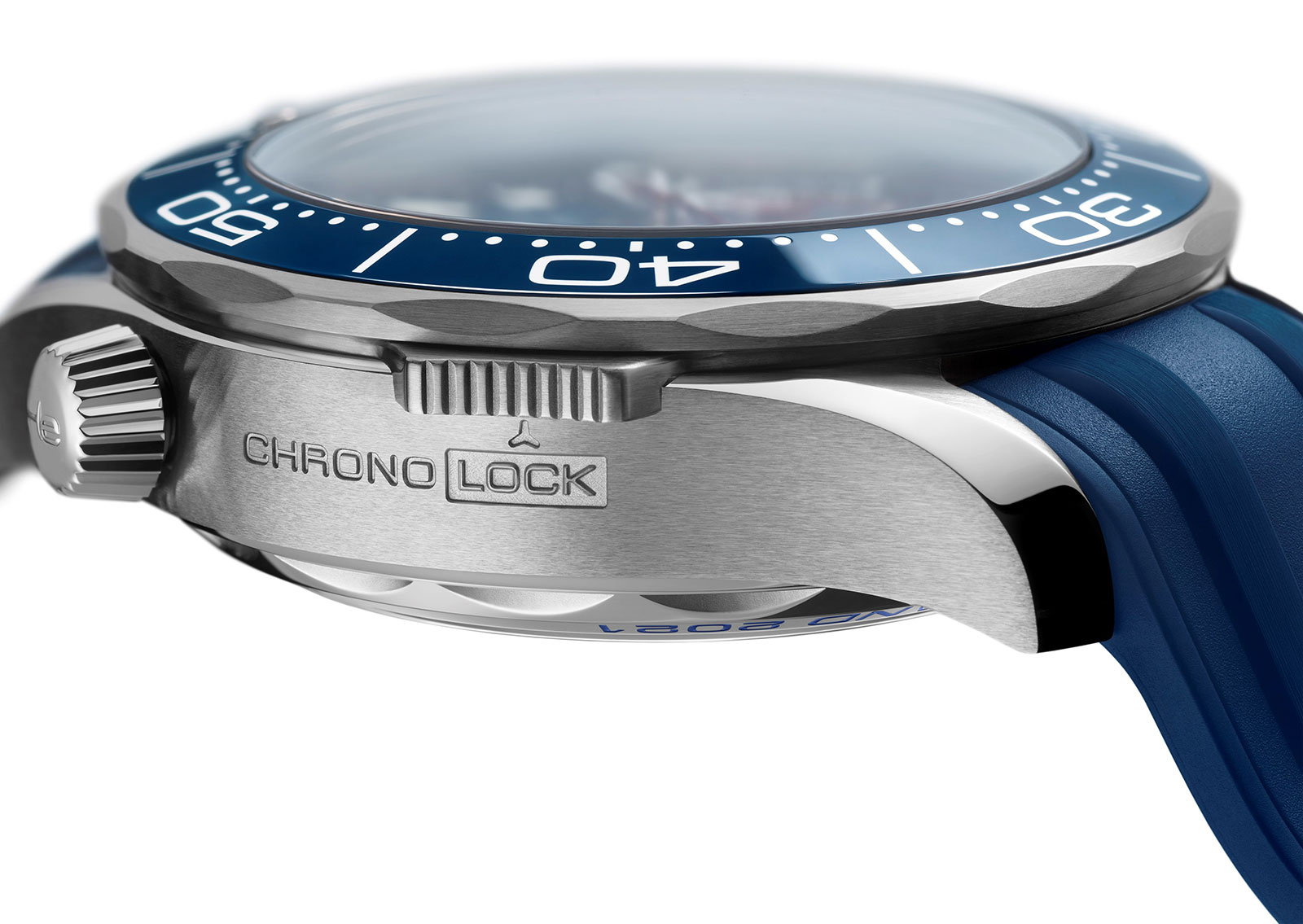 However, at US$10,700 (or 15,050 Singapore dollars), this costs almost 40% more than the standard Seamaster 300M Chronograph. That’s hard to swallow even for the most ardent of yachting fans, and considering the additional features.

For the America’s Cup

The America’s Cup edition has both its dial and bezel in blue ceramic, while the bezel markings are in white enamel – just like the standard model. However, the watch includes elements specific to this edition.

One is the regatta-countdown ring in red-anodised aluminium for the minute register – the countdown is usually five or ten minutes – which features an aperture revealing the elapsed-hours counter below. And the central seconds hand has its counterweight in the shape of the actual America’s Cup trophy. Also, the pushers are coated in rubber, red and blue respectively to reflect the America’s Cup logo. 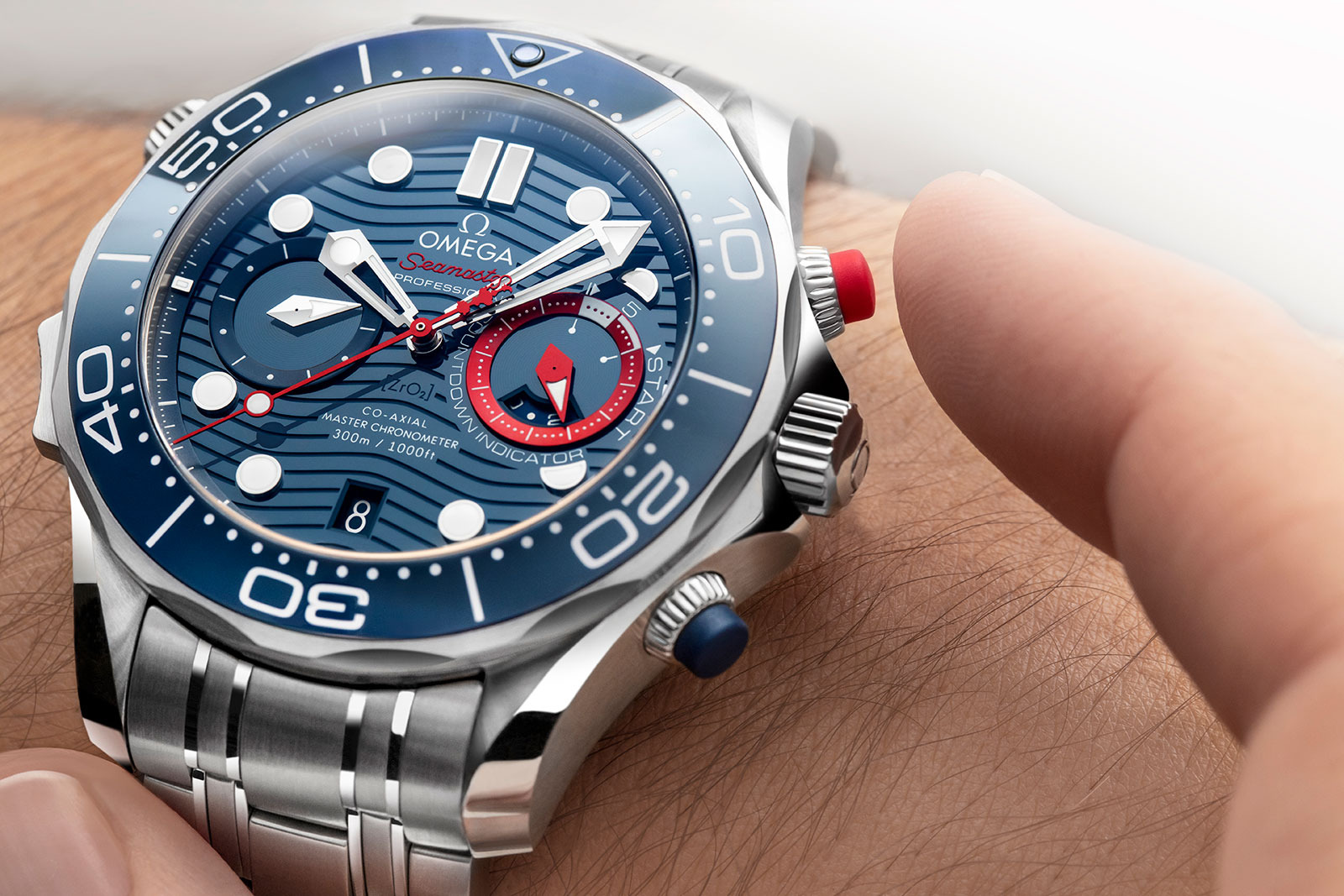 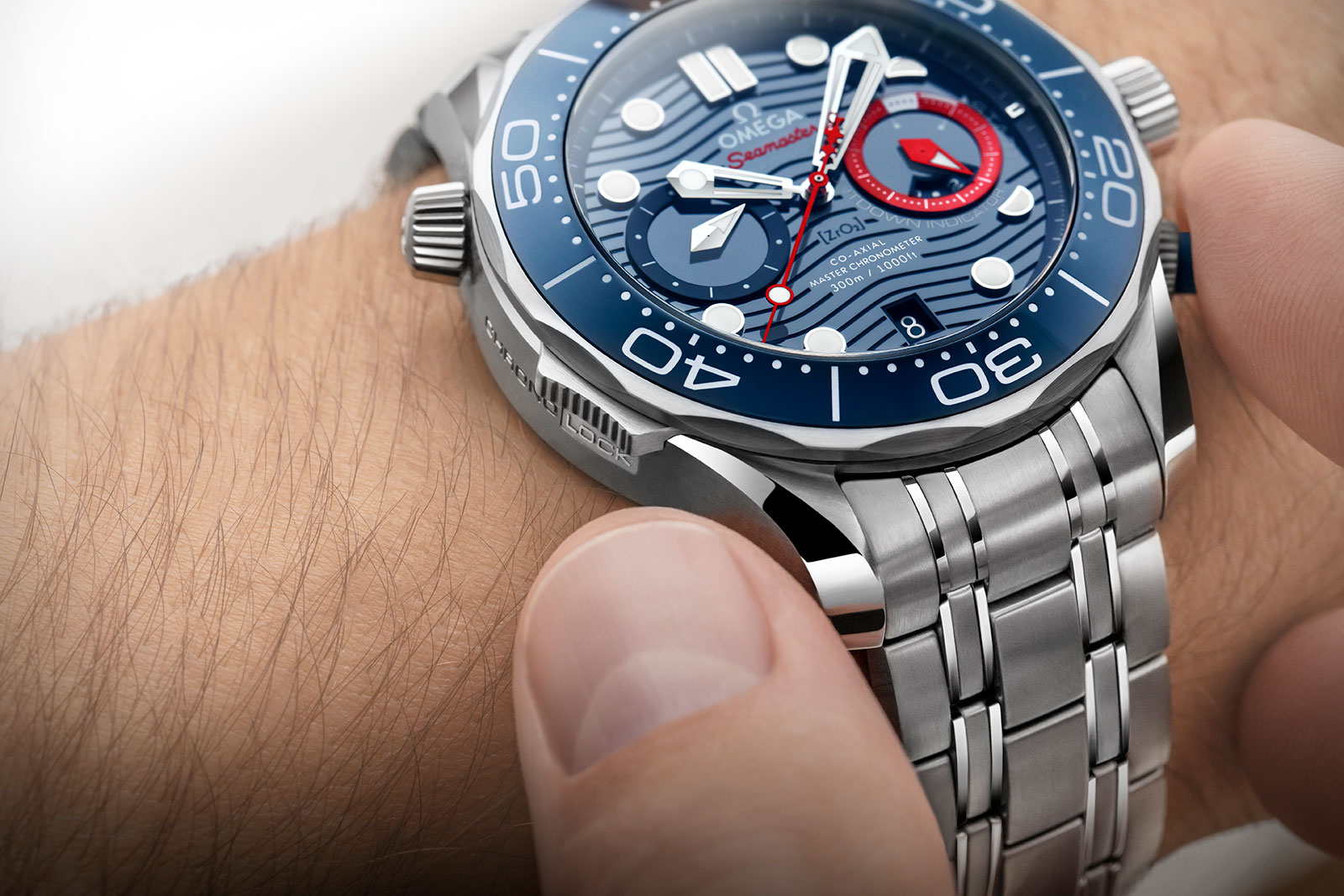 But the watch also has a more practical update: the new Quick Change system that allows for easy swapping between a metal bracelet and rubber strap via a slider on the back of each. Both are included with the watch and can be exchanged without tools thanks to the system. 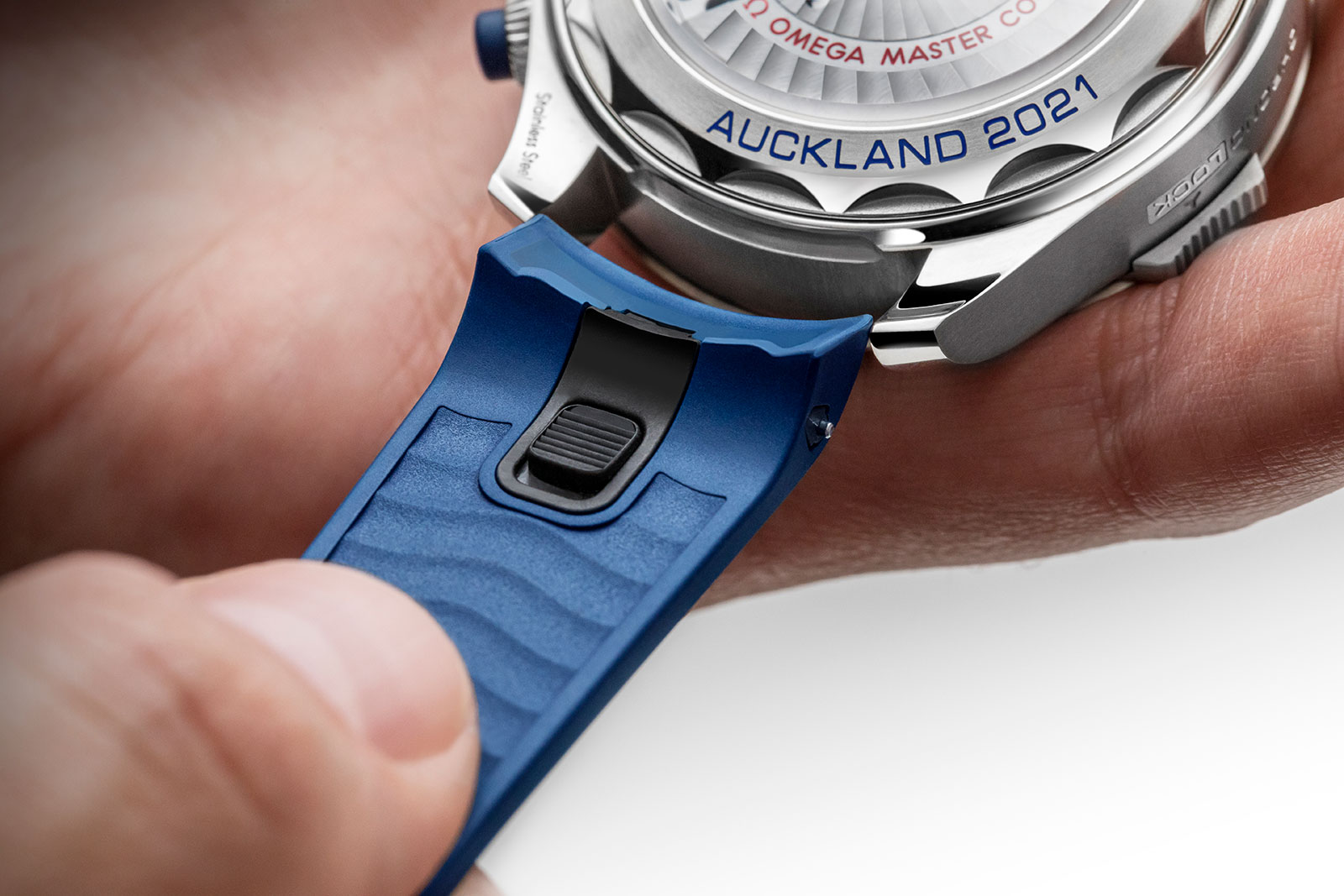 Like the standard model, the America’s Cup edition is powered by the in-house cal. 9900, a high-spec movement that features a column wheel, vertical clutch, Co-Axial escapement, and METAS chronometer certification, essentially all of Omega’s recent innovations in terms of movement technology. 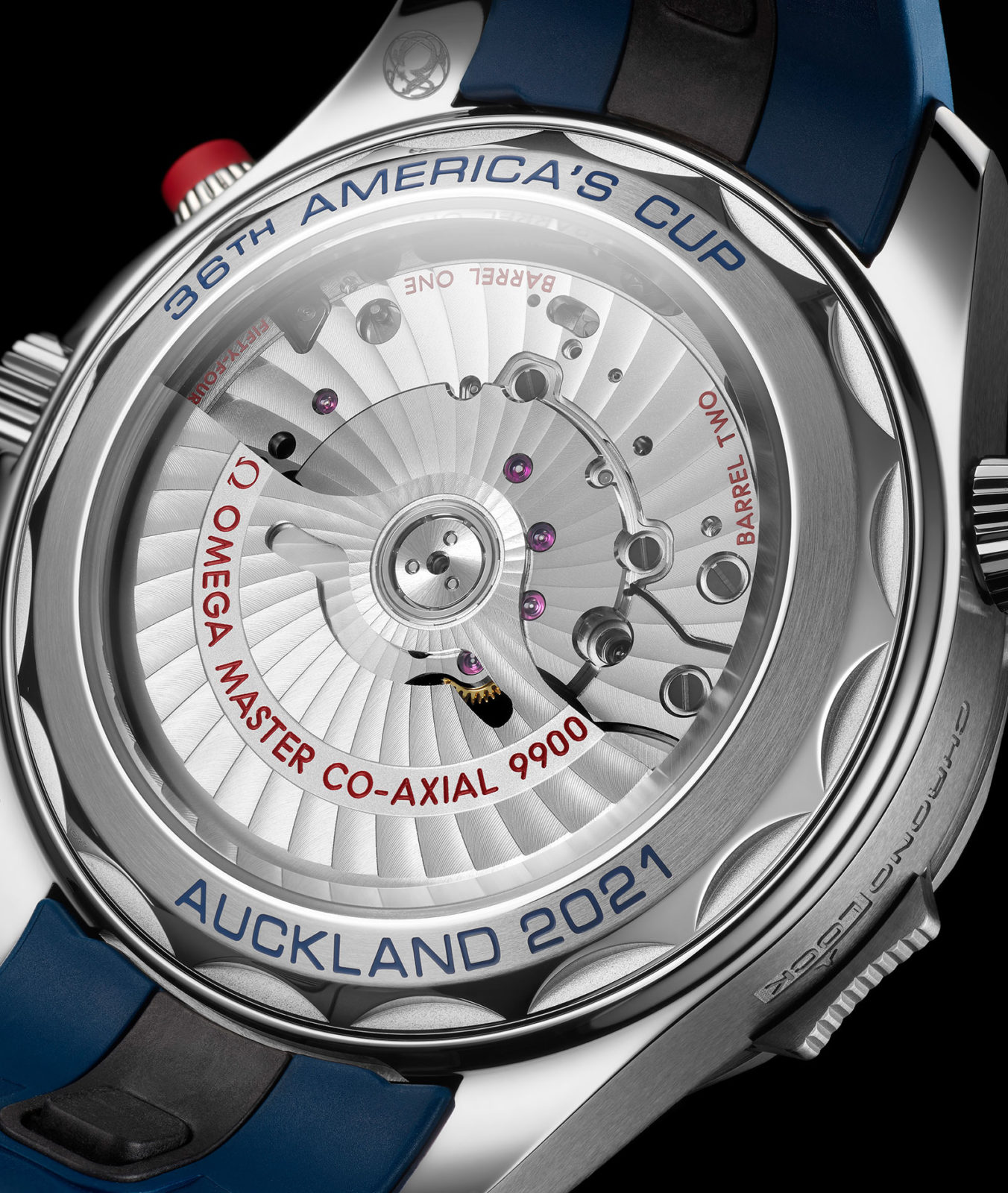 Availability: At Omega boutiques and retailers
Price: US$10,700; or 15,050 Singapore dollars

Once again the official timekeeper.

With a double-faced display.