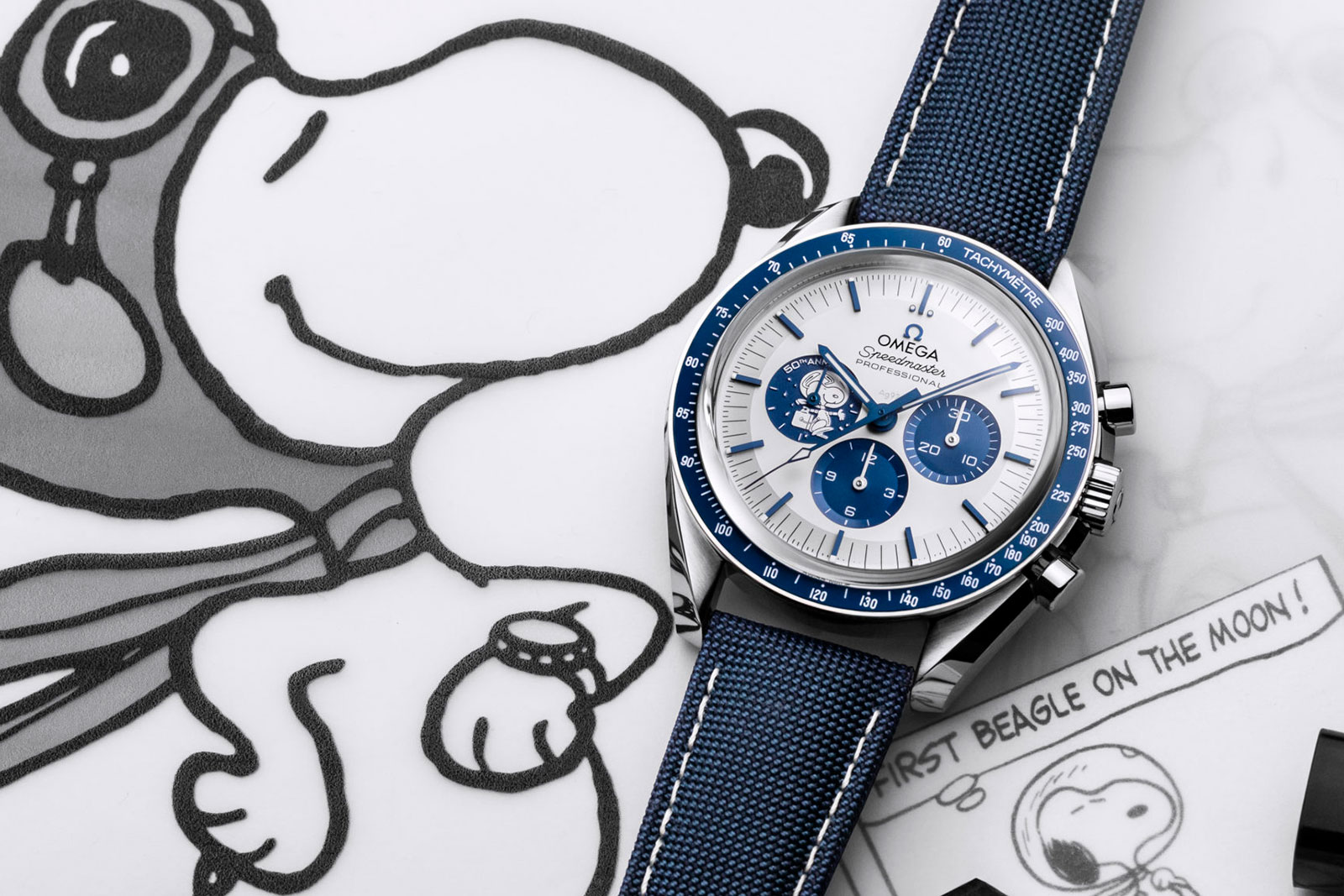 In one fo the most widely predicted announcements of the year, Omega has just unveiled the Speedmaster “Silver Snoopy Award” 50th Anniversary. Essentially the latest-generation Speedmaster Moonwatch dressed up in Snoopy livery, the watch commemorates the Silver Snoopy award bestowed on Omega by NASA in 1970. And crucially, this is not a limited edition, unlike the two earlier Speedmaster Snoopy editions.

While hardly a surprise, the new Speedmaster Snoopy is an attractive variant of the Speedmaster. While the design elements are the most obvious, the coolest bit of the new watch is on the back: the running indicators linked to the dial are a nifty detail that sets this apart mechanically from all other Speedmasters. 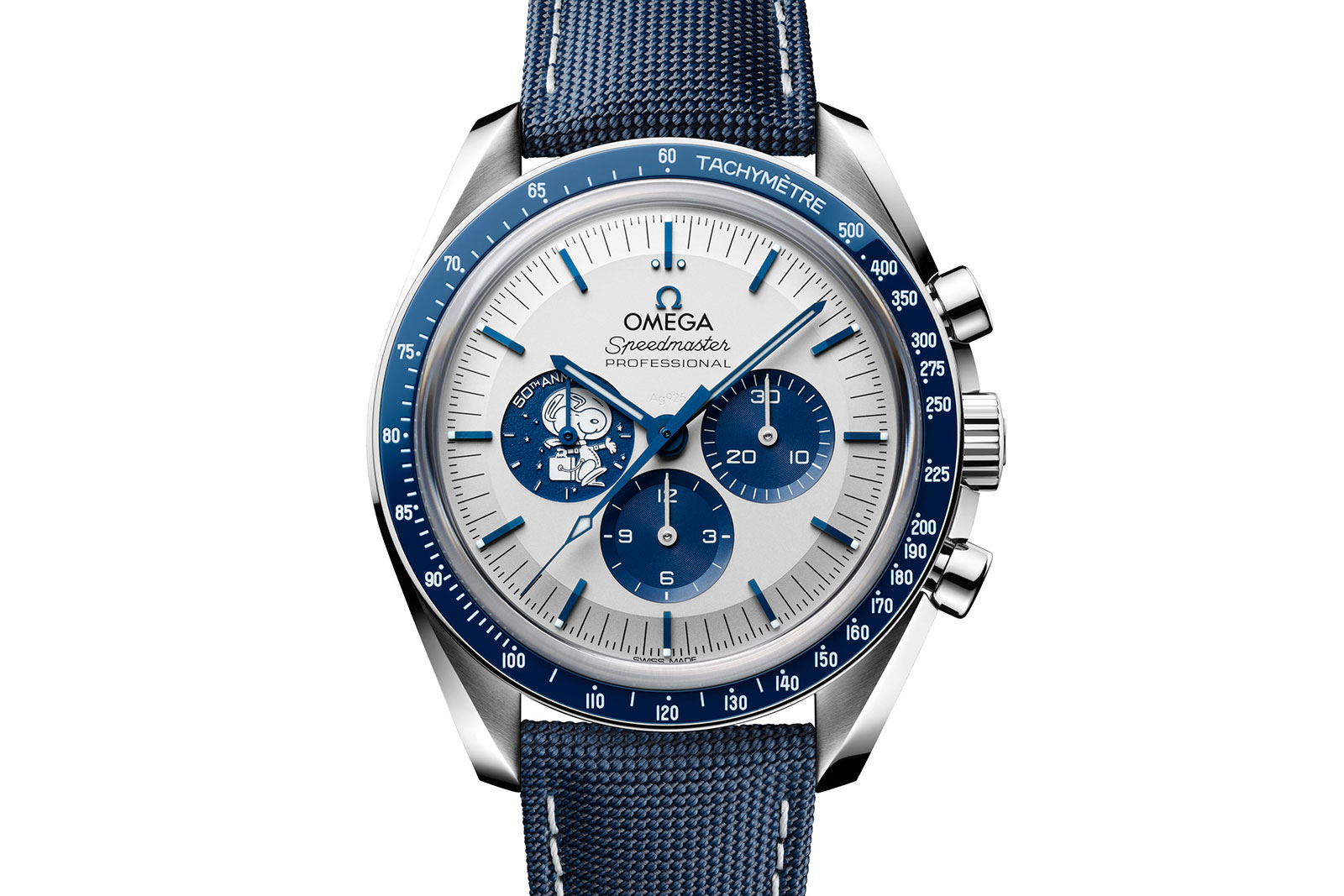 That said, with a price of about US$9,000, the new Speedmaster Snoopy is modestly priced – it is intrinsically a well-priced watch offering solid value – and will no doubt sell extremely well, at least initially, until supply catches up with demand. 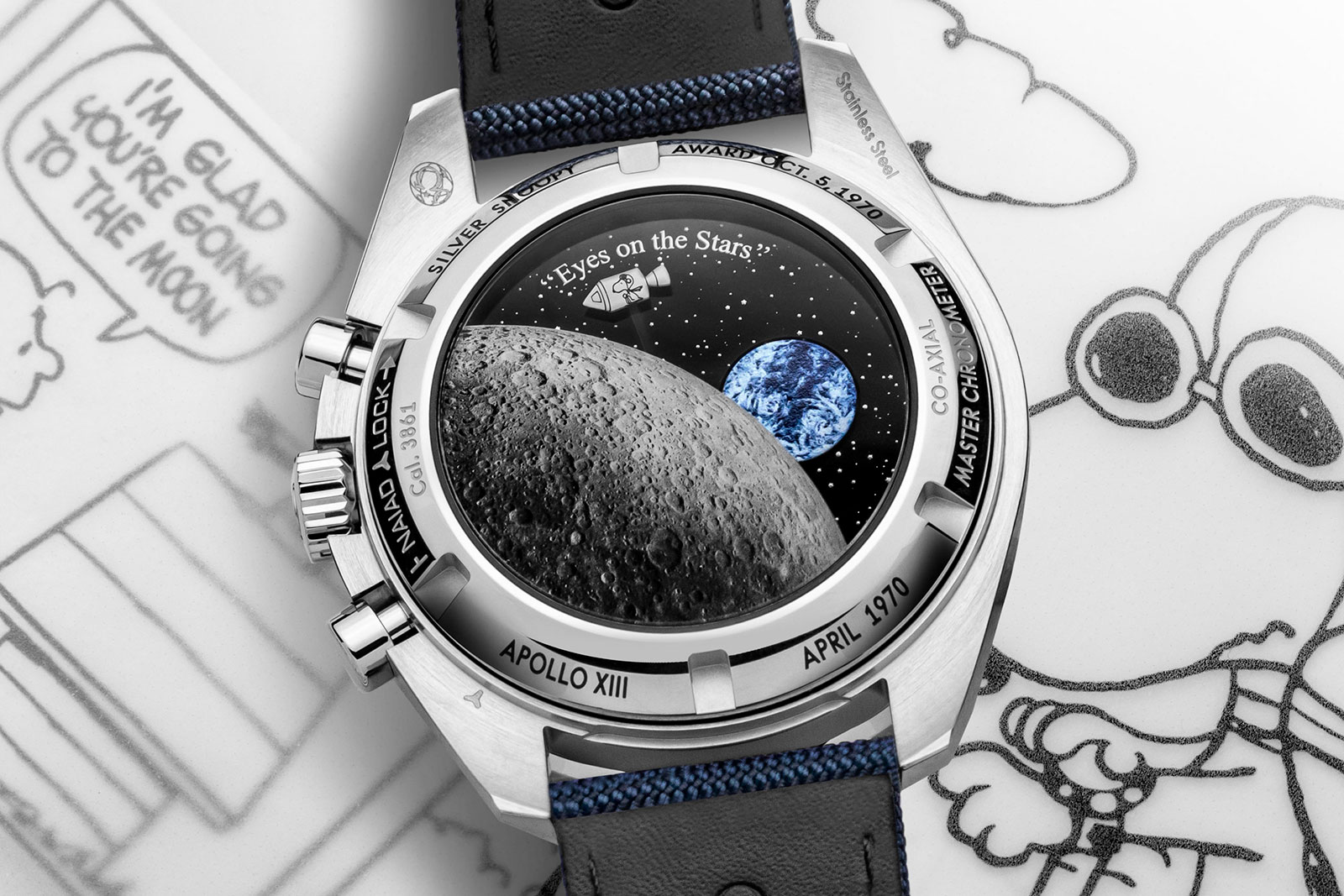 Saving the day 50 years ago

Because the crew of the disastrous Apollo 13 mission used their Speedmasters to time a 14-second engine burn to position the craft for reentry into Earth’s atmosphere – an explosion forced them to shut down the craft’s electronic systems – the Omega chronograph helped saved the day.

As a result, Omega received a Silver Snoopy award, which is handed out in recognition of “outstanding performance, contributing to flight safety and mission success” according to NASA. The award is an annual affair – less than 1% of employees receive it each year – but it has helped elevate the Speedmaster to mythical status.

Taking Silver Snoopy quite literally, the new Speedmaster has a dial made of solid silver along with a stamped, sterling-silver Snoopy medallion in the nine o’clock seconds sub-dial. 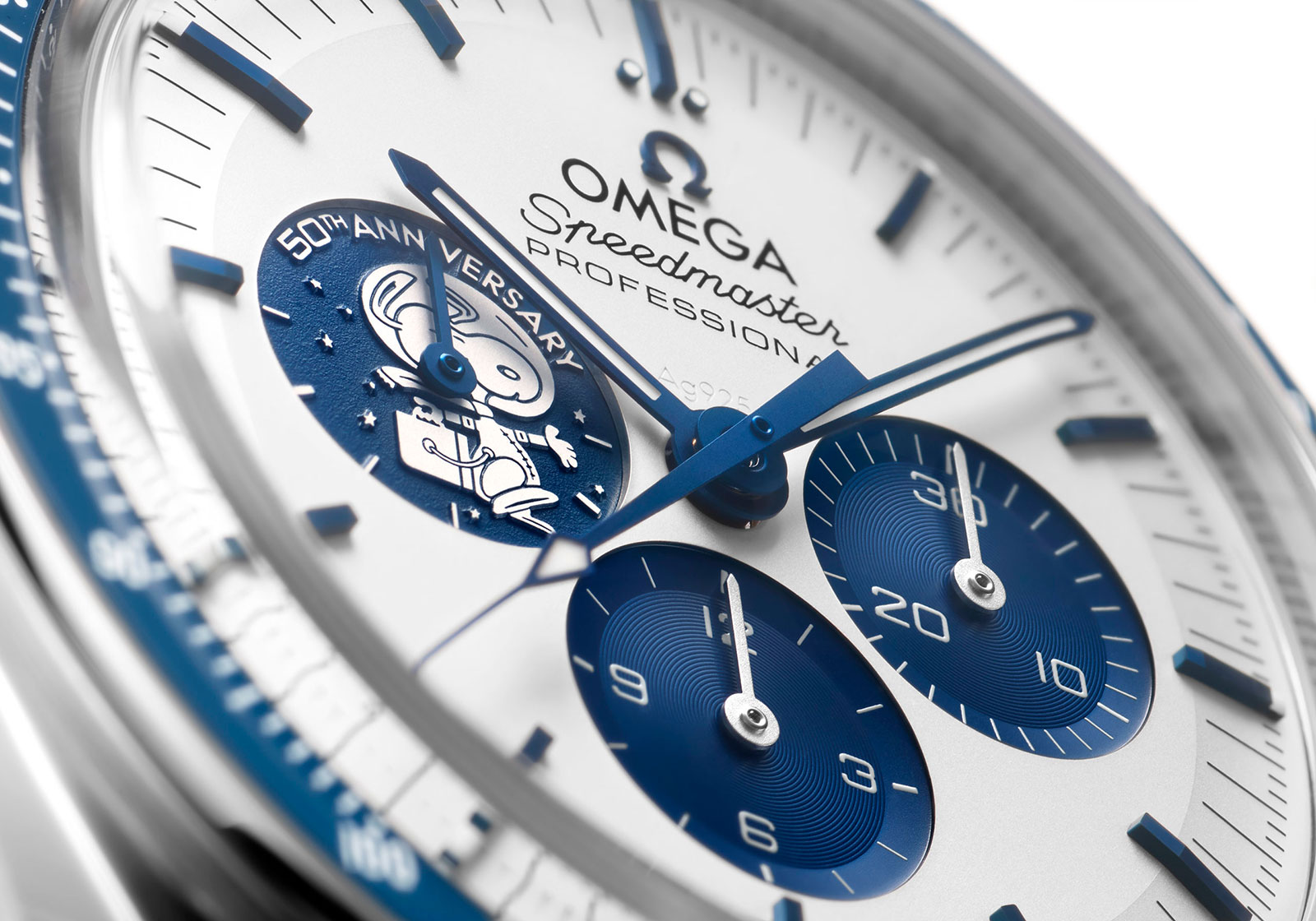 The movement within has been cleverly modified to link two displays on the case back to the time indications on the front. The Earth depicted on the back is linked to the running seconds, and makes one revolution a minute. And the arm carrying a spaceship, or more accurately a Command and Service Module (CSM), with Snoopy as a passenger makes one revolution every minute when the chronograph is starting, being a mirror image of the central, chronograph seconds hand.

Because the case back is secured with a Naiad Lock, Omega’s name for its bayonet-style case back attachment, the motif on the back always remains upright. 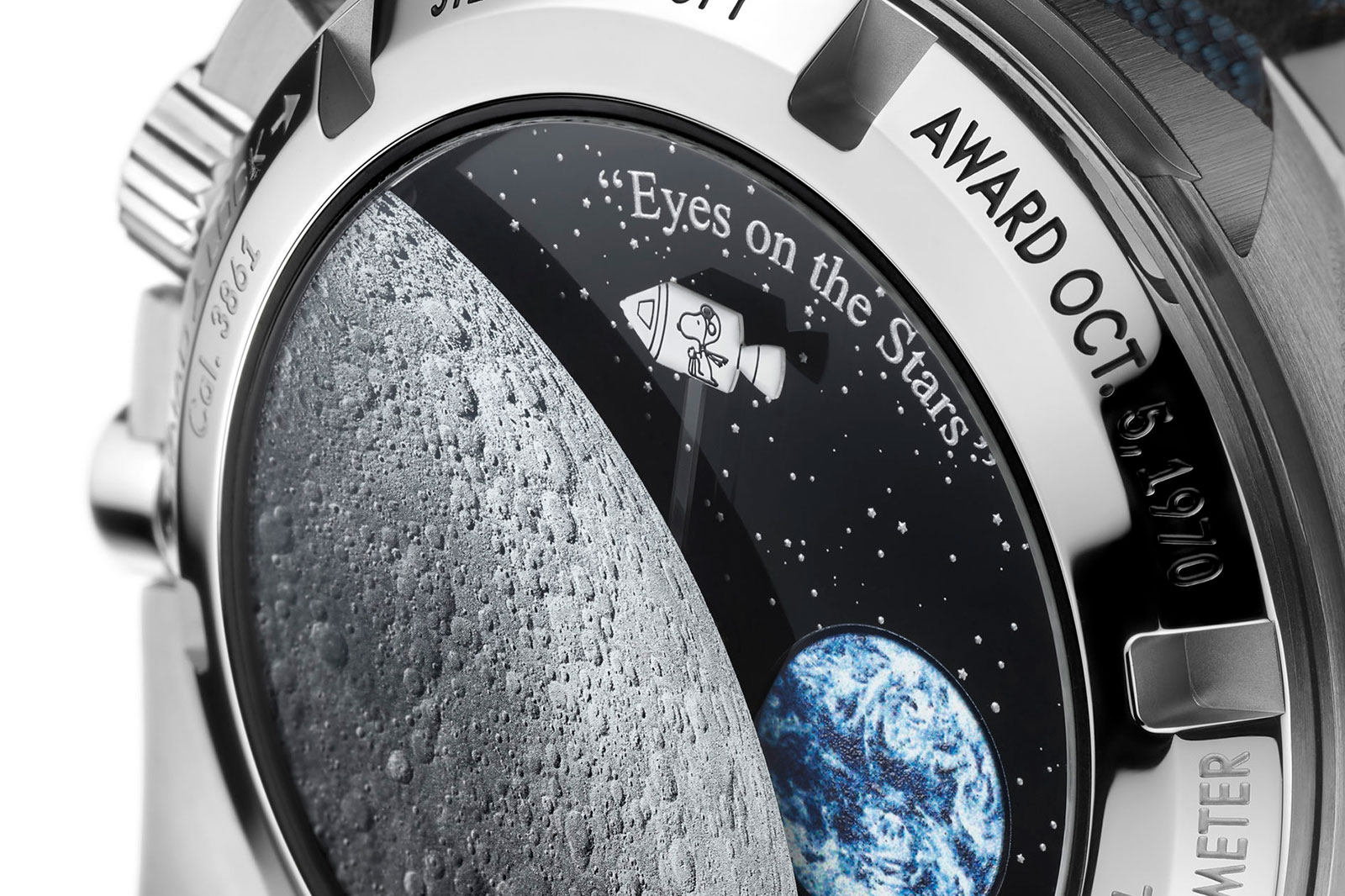 The case is a standard, 42 mm Moonwatch case in steel that’s fitted with a tachymeter bezel featuring a blue-ceramic insert that has white enamel markings.

Inside is the cal. 3861, the modernised version of the longstanding cal. 1861 found in many generations of Speedmasters. The cal. 3861 features a Co-Axial escapement and magnetism-resistant escapement, and is also a Master Chronometer that’s undergone the testing process supervised by the Swiss meteorological agency METAS. 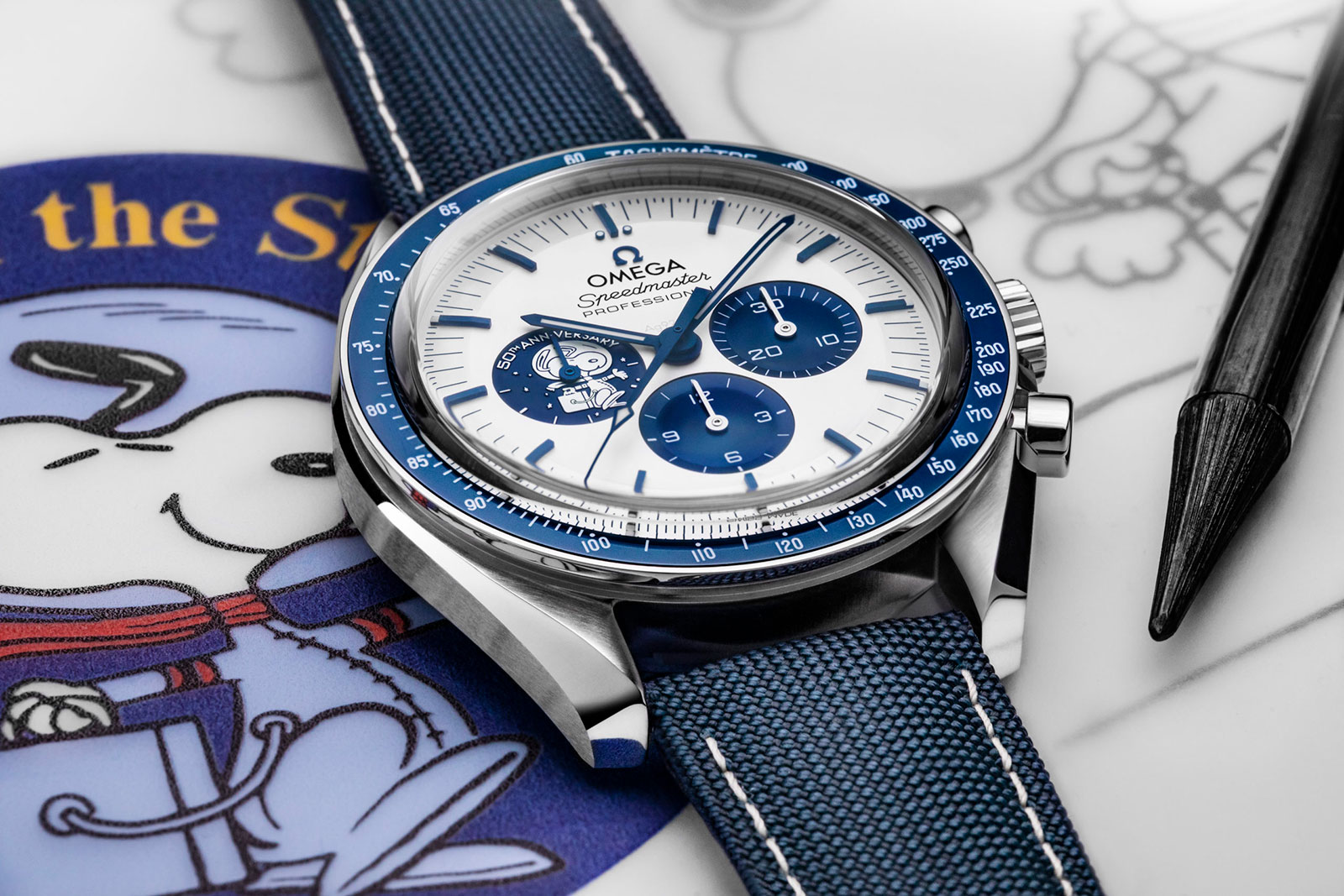 Limited edition: No
Availability: To be announced
Price: US$9,600; or 14,100 Singapore dollars

A Moonwatch in "Mark 40" Schumacher livery.