Announced two months ago to mark 20 years of Paneristi, the Radiomir Venti “Paneristi” PAM02020 is an unexpectedly good-looking watch, albeit one that can’t help but remind you why it exists, again and again.

Celebrating its 20th anniversary this year, Paneristi got the inspiration for its name from Ferraristi, the nickname given to Ferrari owners and fans.

It the pioneering web forum dedicated to Panerai, which meant Paneristi was once the most important online community for the world’s hottest watch brand. Those days have long since passed, but the forum remains influential, and no doubt figures in Panerai’s plans in rejuvenating itself amongst collectors, which probably explains this watch. 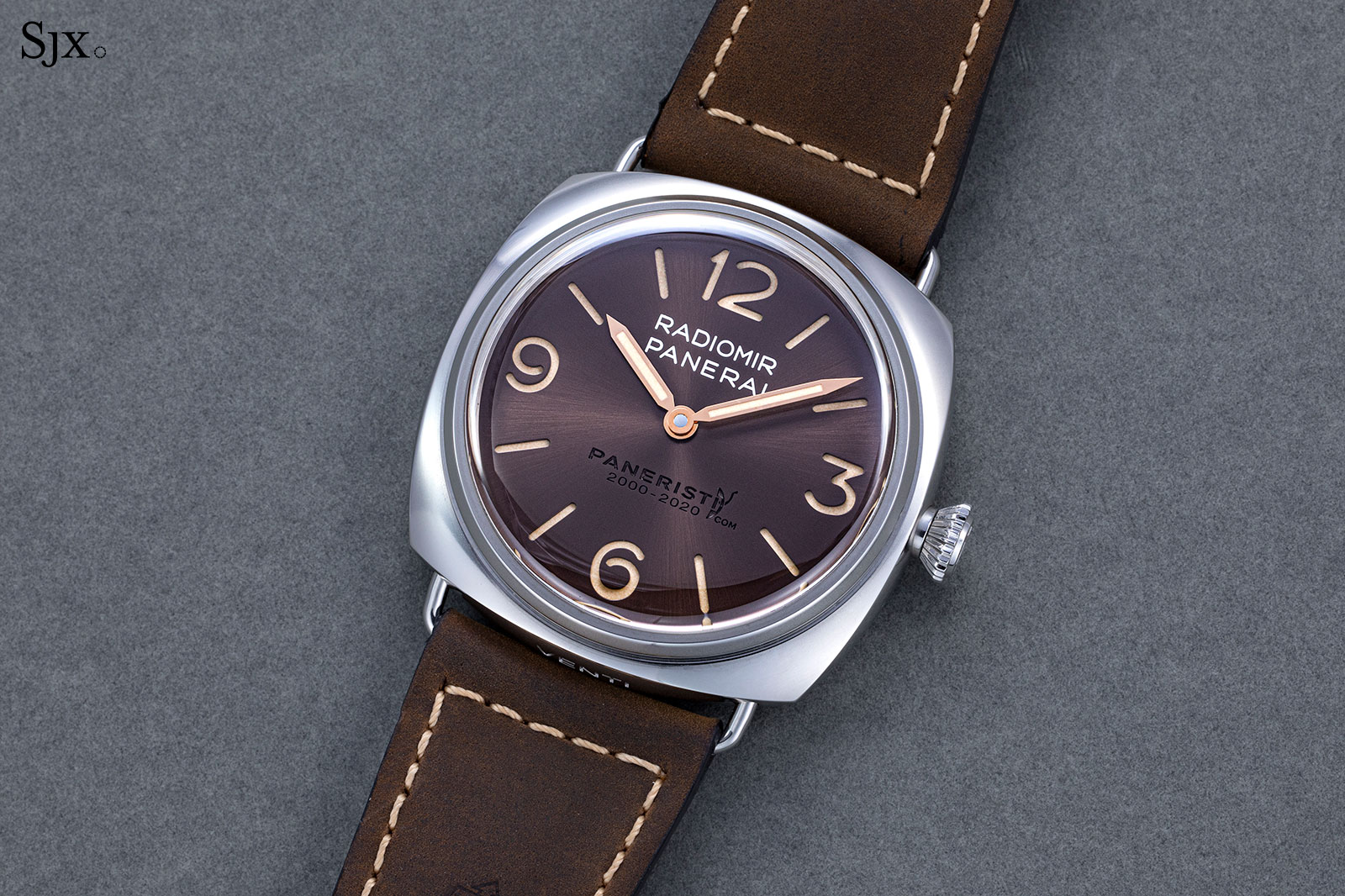 I outlined the background of the watch in the original announcement at its launch: “This is the sixth Paneristi edition. Six editions ago, Paneristi was arguably the most fanatical watch forum dedicated to the hottest brand in the world. The first Paneristi edition, the PAM 195 of 2003, sold out in an instant, and despite all of them having the owner’s name engraved on the back, sold for many multiples of the original retail price on the secondary market. But times have changed.”

Beyond the history, the PAM 2020 is actually an enticing watch with several strongly appealing features – as well as one major drawback. 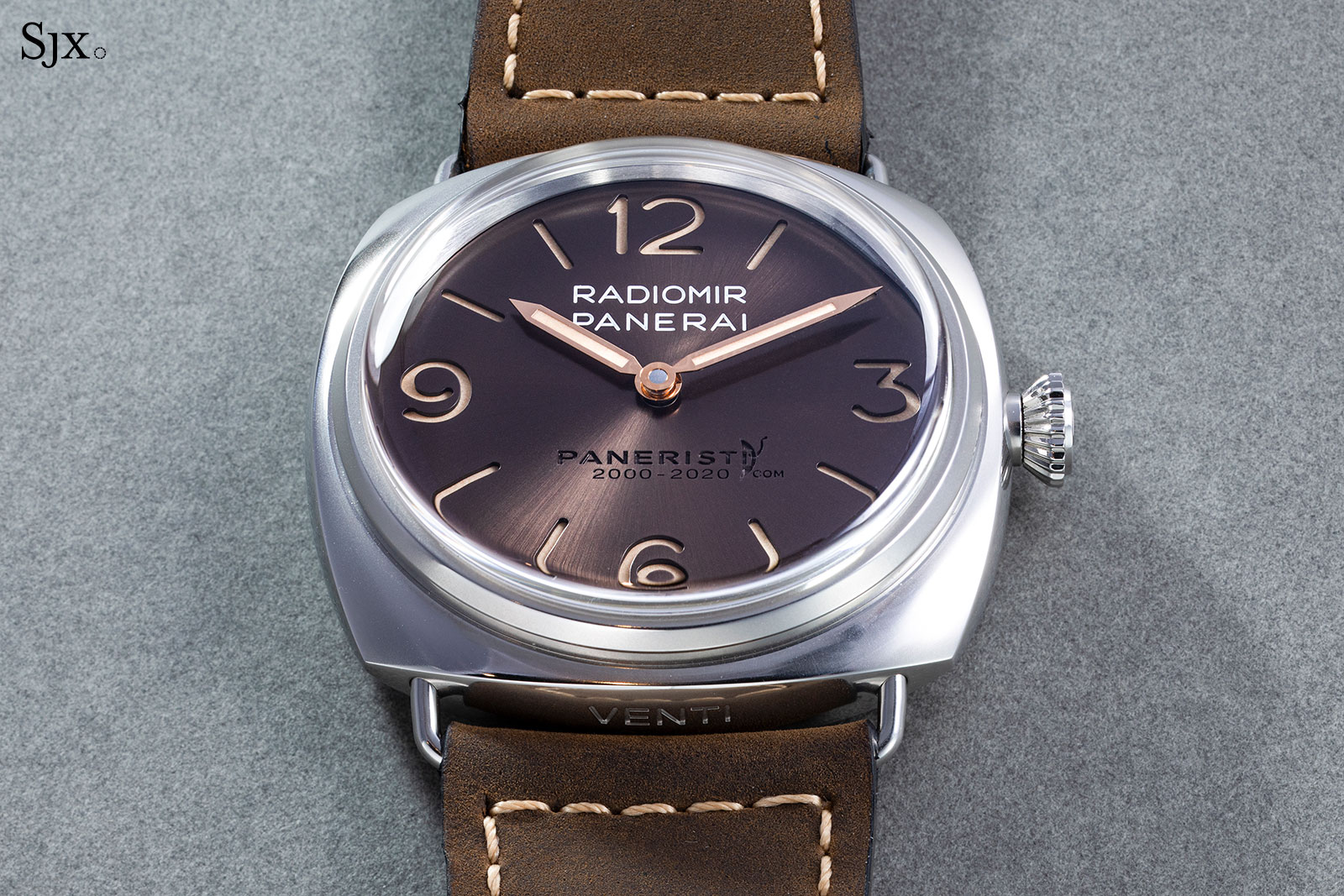 The verdict on the PAM 2020 is straightforward: it’s appealing, with well executed details and a particularly beautiful brown dial, but the anniversary logo at six o’clock is deeply unattractive. Fortunately it is not excessively obvious – it doesn’t shout out at you on the wrist – but it is there, and it shouldn’t be. Setting the logo aside, the PAM 2020 is a good-looking watch, with the dial finish being particularly striking. The metallic-chestnut colour is evocative of vintage “tropical” dials, but it’s not an out-and-out remake as past models were (and too many other brands are also doing). And like last year’s Radiomir PAM 992, the PAM 2020 has an “aged” finish on the case, which complements the dial well.

Another aspect of the appealing is the price, US$6,500. It’s relatively accessible for a watch like this, and also reasonable relative to its technical features, namely the basic but solid in-house movement. All in all, the PAM 2020 is well done – except for the logo on the dial. 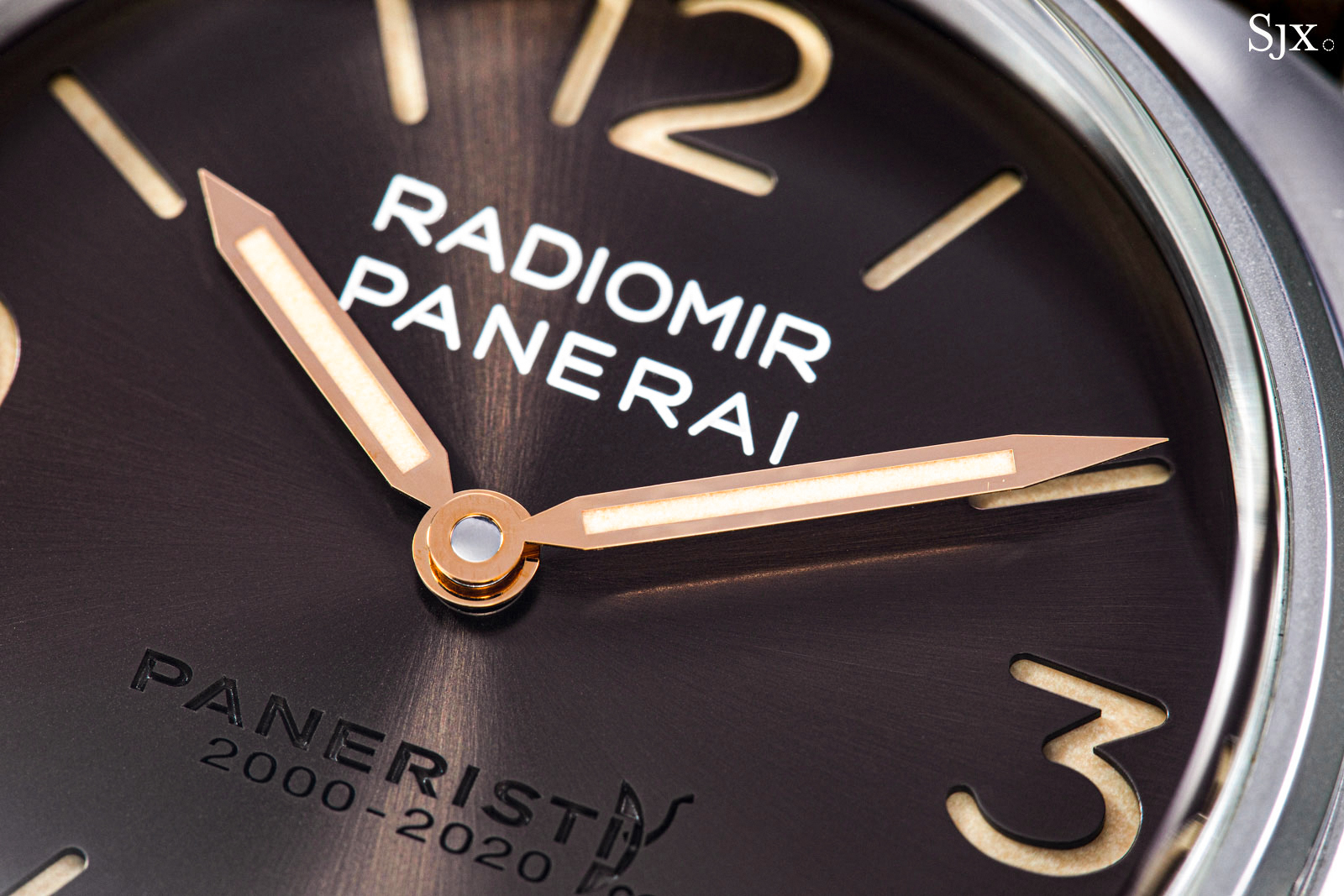 Vintage-looking dials with faux patina and excess “tropicalisation” have been faddish for too long, making them somewhat passe. Vintage-inspired but clearly modern, the PAM 2020 dial avoids looking common.

It’s done in a rich metallic brown that’s enhanced by a prominent radial brushing that catches the light just right. Surprisingly, the faux-aged Super-Luminova on the dial and hands works well because it suits the dial colour. Add to that the gilt hands and the look is perfect, well, almost. The logo at six o’clock is problematic on several levels. For one it is large, about a third of the dial’s diameter in length. And it reproduces Paneristi logo, which appropriately includes “.com” since it is a web community, but the URL looks out of place on the dial.

There are more subtle ways of putting the commemorative emblem on the dial, and this is not one of them. But the emblem is not overtly obvious at arm’s length, so it is not a death sentence for the appeal of the watch.

Like many Panerai dials it’s a “sandwich” construction, which means the hour markers are cut-outs on the upper dial that sits on a lower dial painted with Super-Luminova in the form of the cut-outs, making the luminous paint is visible through the apertures. And again like other Panerai dials the logo under 12 o’clock is engraved and filled with white lacquer, a reference to vintage Panerai watches with the same feature. 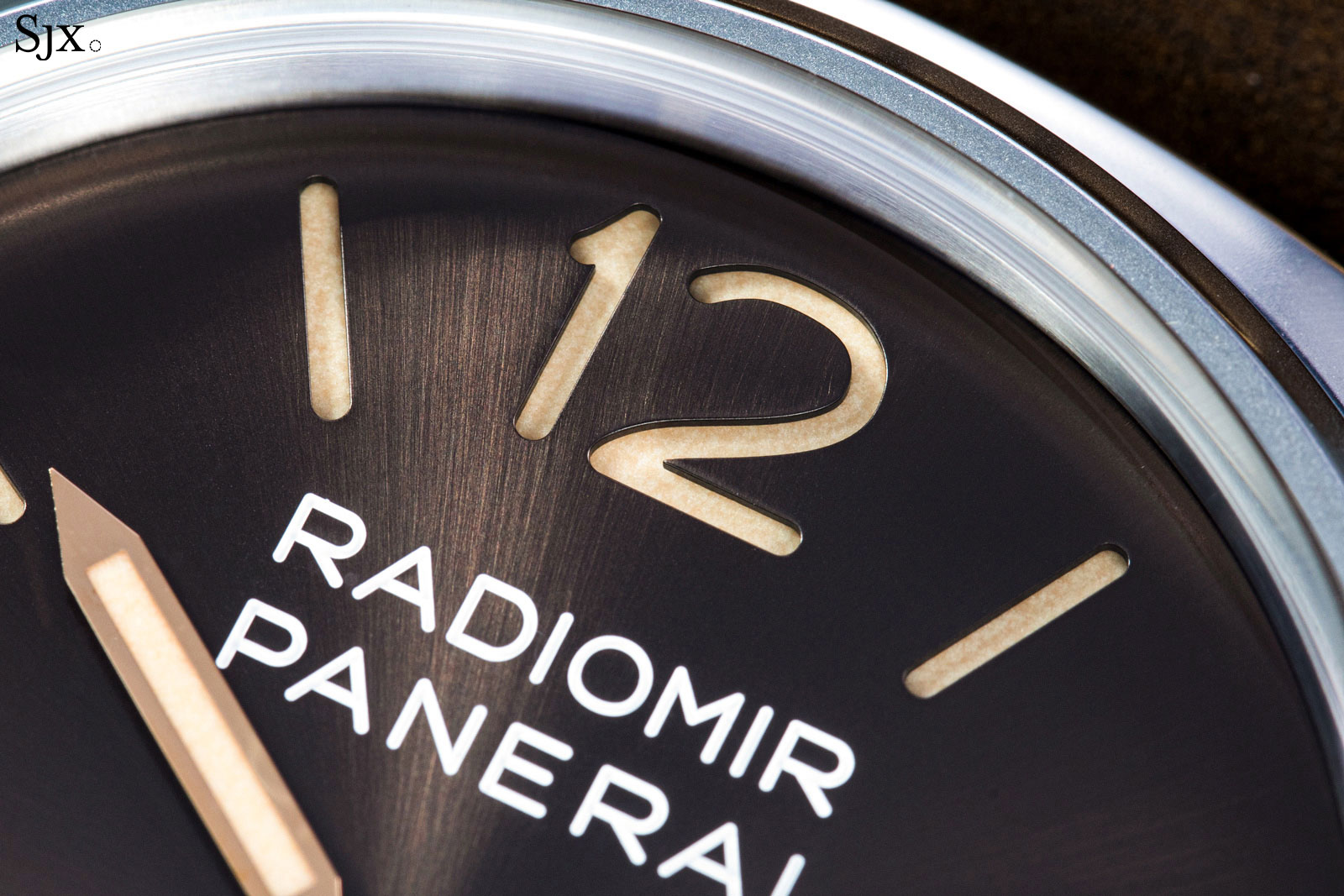 The PAM 2020 is 45 mm in diameter, and wears just like any other Panerai of the size – large but that’s the point of it all. The watch is big, and topped with a bulbous crystal, but doesn’t wear quite as large as the diameter suggests since the wire lugs are short and small.

More interesting is the case finish that was also found on the PAM 992 from last year. Intriguing at first sight, the case finish is labelled as “patina” by Panerai. Paradoxically, it looks like a cross between a matte and polished surface, but works well with the retro-military style. And like the dial, it has some vintage flavour while still looking obvious new, and so avoids seeming like an affectation. Panerai says the case finish is the result of a three-step process that starts with mirror polishing all surfaces of the case. That’s followed by quick blasting with “micro granules”, that are most likely ceramic beads. According to Panerai, the beads are smaller than the usual used for case finishing, creating a surface that is dimpled more finely and sparsely, like fine sandpaper was gently rubbed over the surface.

The final step is another round of polishing to take away the pronounced granularity of the surface, leaving it fairly smooth and creating what Panerai describes as a “semi-matt” finish. 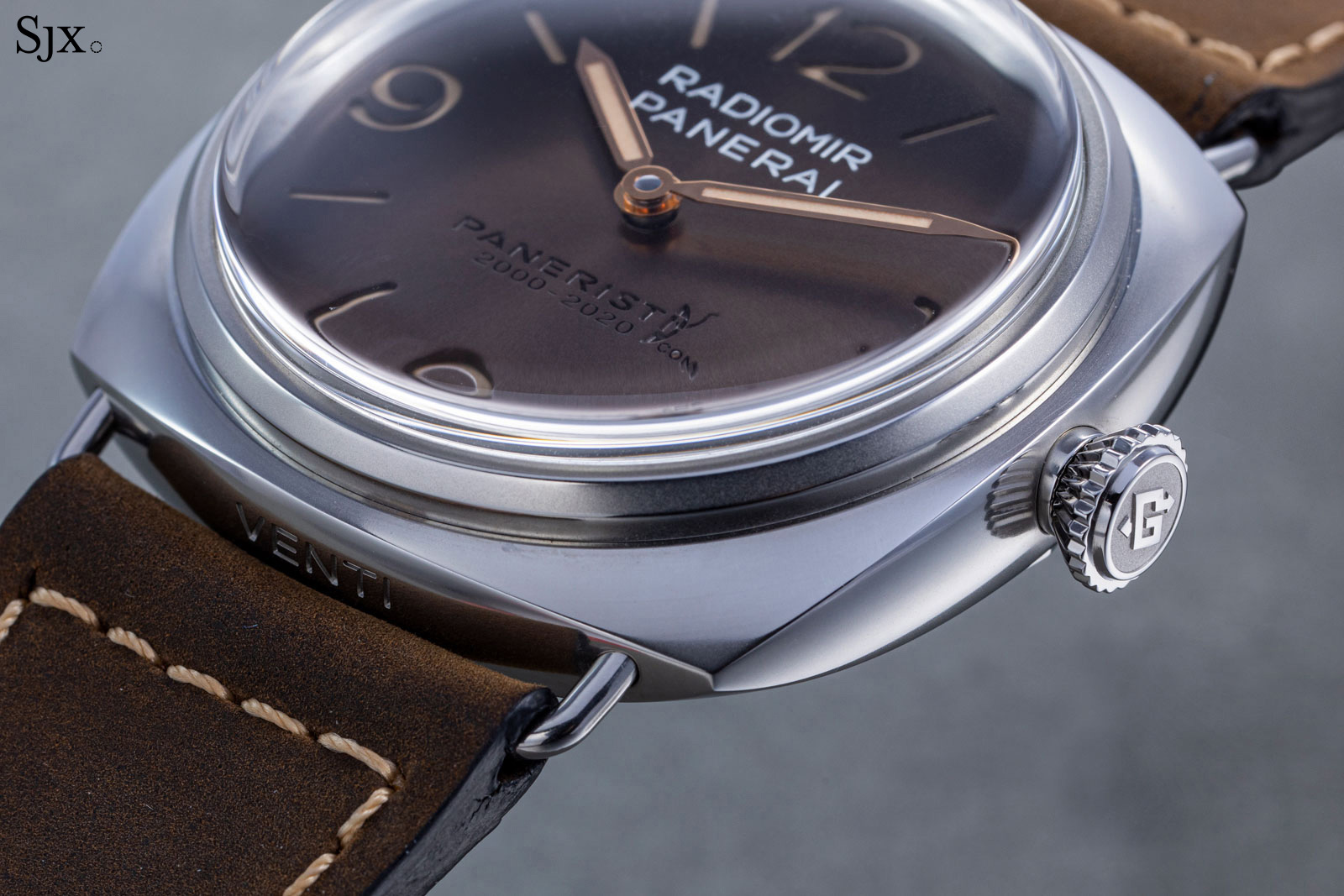 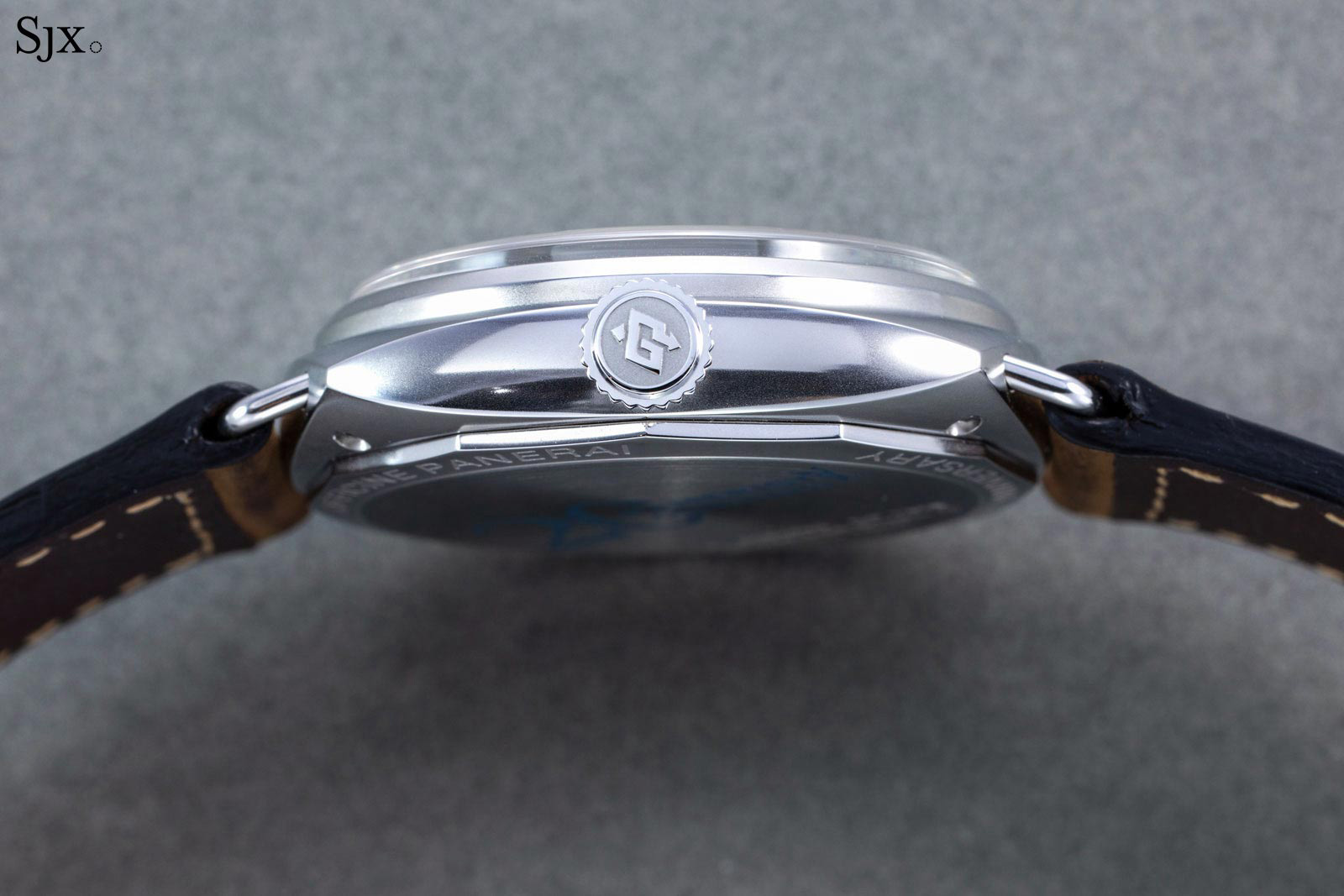 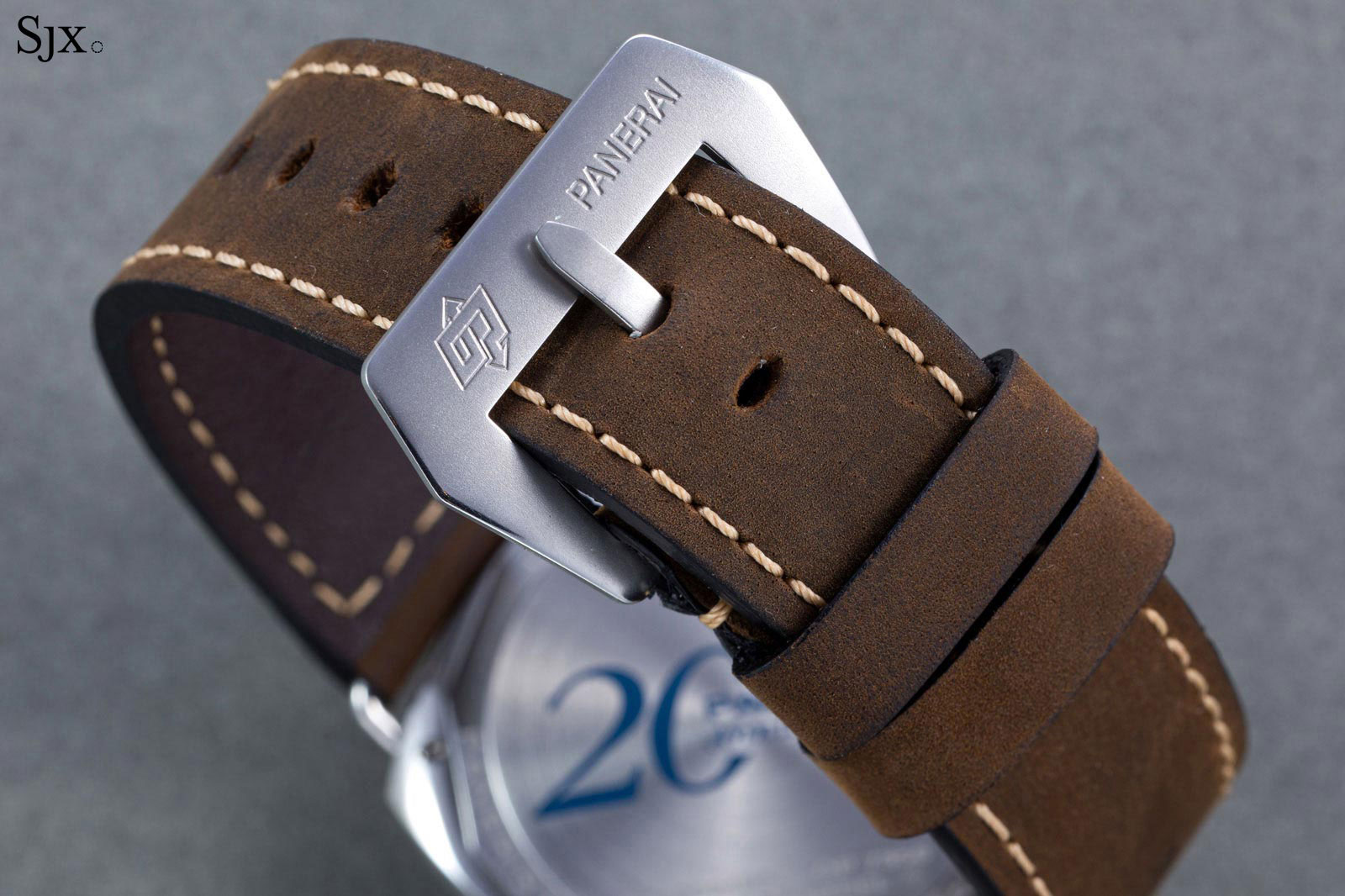 The case back is also clad with another version of the anniversary emblem, here in blue-filled engraving. And for good measure, the edge of the back is also engraved with anniversary text. On the back the emblem doesn’t really matter, so that’s that.

But that isn’t actually that, for the lower flank of the case is also engraved with “Venti”, which is Italian for “twenty” – another reminder of the anniversary. Inside the case is the P.6000, the brand’s entry-level in-house movement. Conceived as a replacement for the ETA Unitas that once powered most of Panerai’s offerings, the P.6000 is basic but still an upgrade over the Unitas. Most useful is the 72-hour power reserve, though it also has features like a balance bridge (instead of a balance cock) for more stability.

Panerai doesn’t reveal the movement in any of the watches it is found in, so it is probably not much to look at, but for the price range it is more than good enough.

The PAM 2020 is a good looking watch, save for the emblem on the dial. Though not as obtrusive as it appears in some photos, the emblem was a mistake. Still, the dial finish is very attractive, while the rest of the watch is well done for the price. 20 years later and the world has changed...