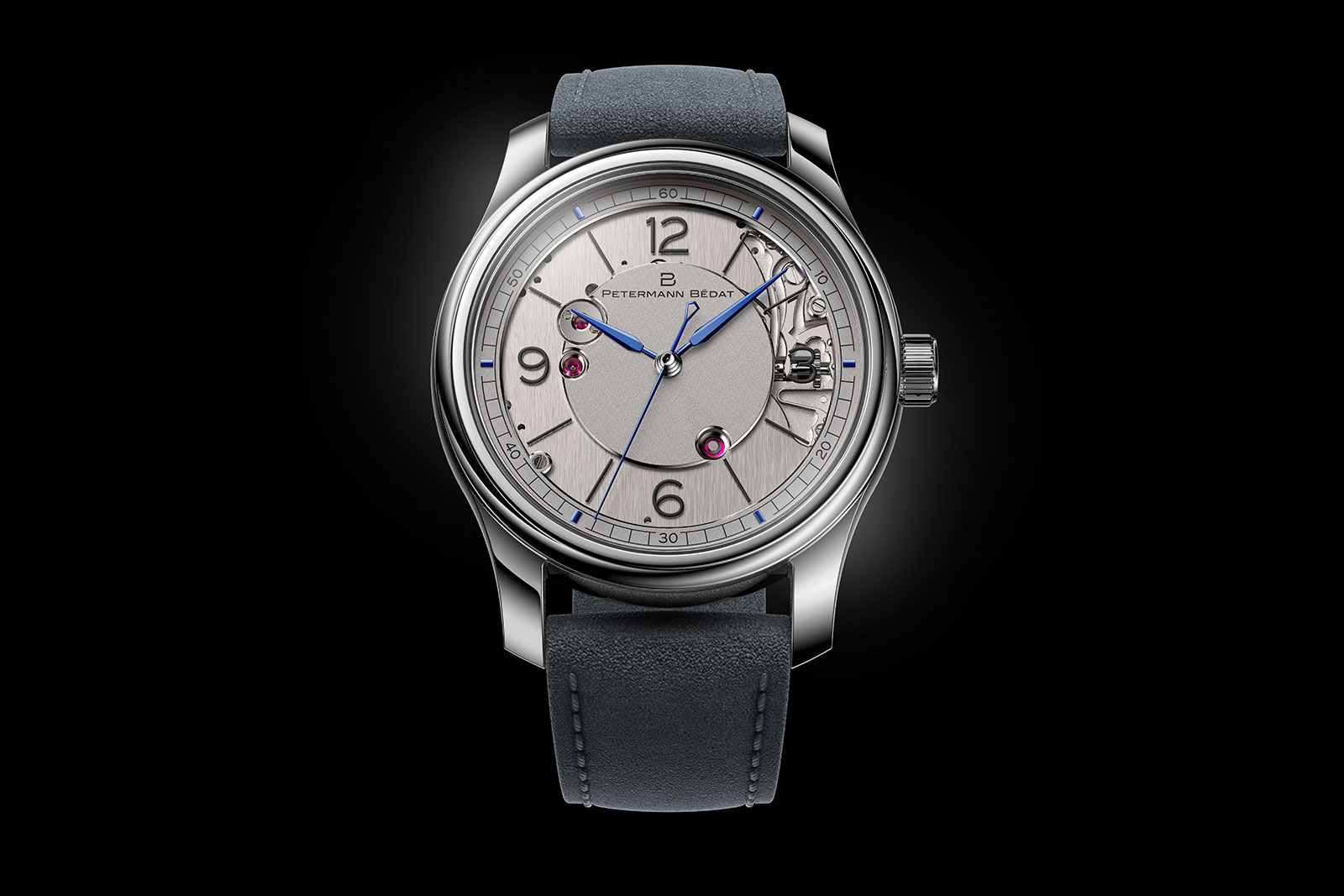 First revealed a year ago as a prototype with a dial that was a work in progress, the Petermann Bédat 1967 wristwatch with an unusual deadbeat seconds mechanism has just been launched in its final form. Mechanically identical to the prototype – it’s equipped a secondary escapement for the jumping seconds – the refined 1967 now has a partially-open dial that shows off the finely-finished keyless works.

The prototype 1967 deadbeat seconds was let down by an uninspiring faux-classical dial, which was a shame, because the movement was executed to an impressively high level.

Fortunately, Messrs Petermann and Bedat embarked on a total redesign of the dial. Independent watchmakers don’t often make drastic changes to designs in response to criticism, but the two did so, and the result is a success.

The new 1967 is a handsome watch that manages to look modern while evoking classical dial design. In fact, the new dial is essentially a “sector” dial with a sapphire chapter ring, a novel combination that has not been done before. And it is matched with Petermann Bédat’s take on classical lance-shaped hands, which complete the contemporary feel. 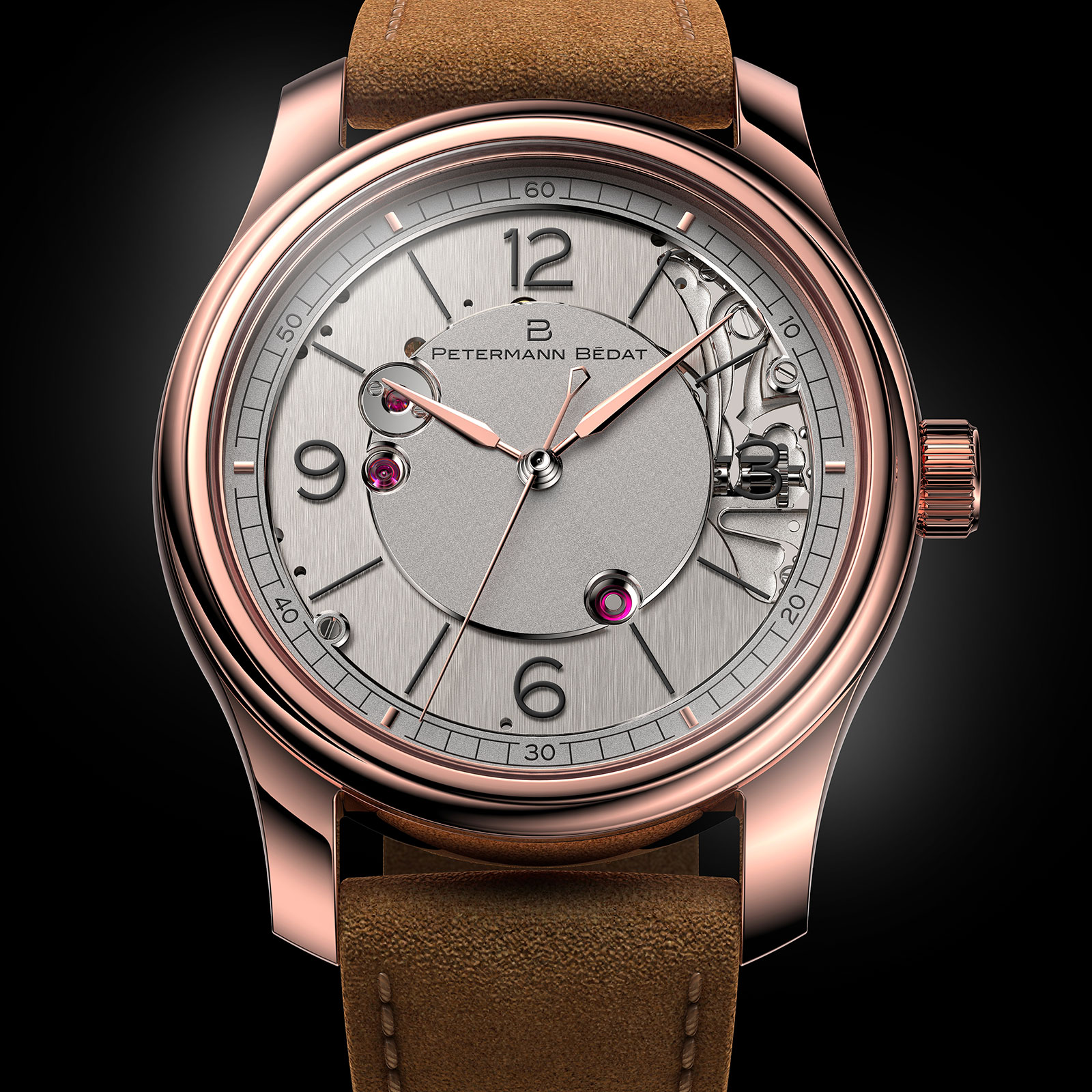 Dial aside, the rest of the watch is largely identical to the prototype. The movement was already excellent and will be almost unchanged in the production versions, although Mr Petermann says that the engraved lettering on the three-quarter plate will be improved.

Priced at little under 60,000 Swiss francs, which is about US$63,000, the 1967 is fairly priced for the complication and quality. And it is also an unconventional offering from a haute horlogerie independent. Although the deadbeat seconds is fairly common amongst affordable watches – Austrian independent Habring2 has made a specialty of jumping-seconds watches priced below US$10,000 – it is uncommon at the high end. 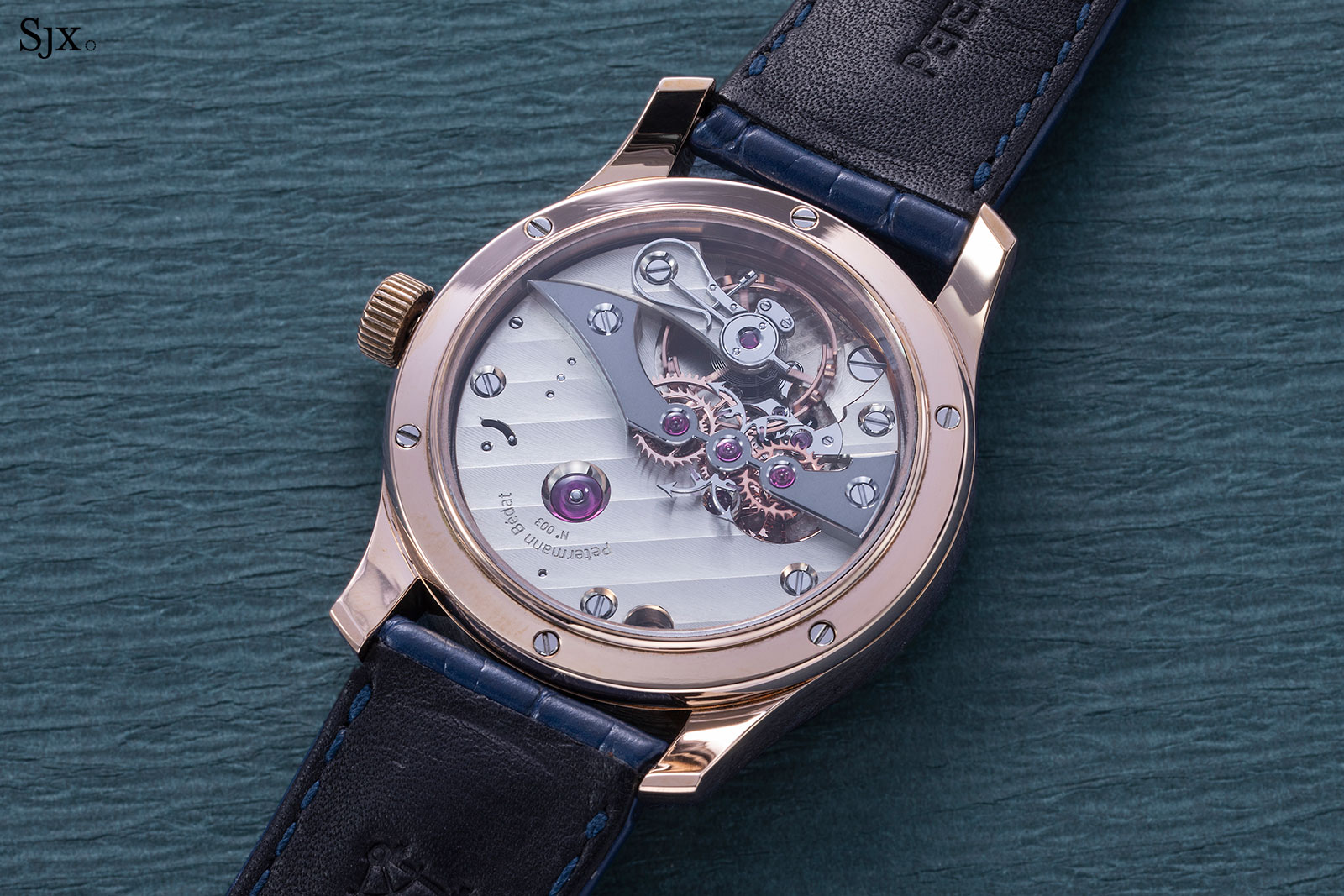 Petermann and Bédat, with help from Renaud

Founded by Gaël Petermann and Florian Bédat, both Swiss watchmakers who spent several years working for A. Lange & Söhne (and Mr Petermann then worked for Svend Andersen), the brand was founded in 2017. The duo set up shop in the town of Renens, adjacent to the workshop of Dominique Renaud, the watchmaker best known for cofounding Renaud & Papi, the complications specialist now owned by Audemars Piguet.

With Mr Renaud’s help, the two young watchmakers constructed the cal. 171 in the 1967 wristwatch. The movement has an elaborately constructed independent going train and escapement for the jumping seconds, which is contained under a large, frosted steel bridge over the three-quarter plate.

The jumping, or deadbeat, seconds is also what gives the watch its name: 1967 was the year the first prototypes of quartz movements were debuted in both Switzerland and Japan. And the defining trait of a quartz movement has long been a seconds hand that ticks forward in one-second steps, which is exactly what the 1967 does, except it accomplishes it entirely mechanically. 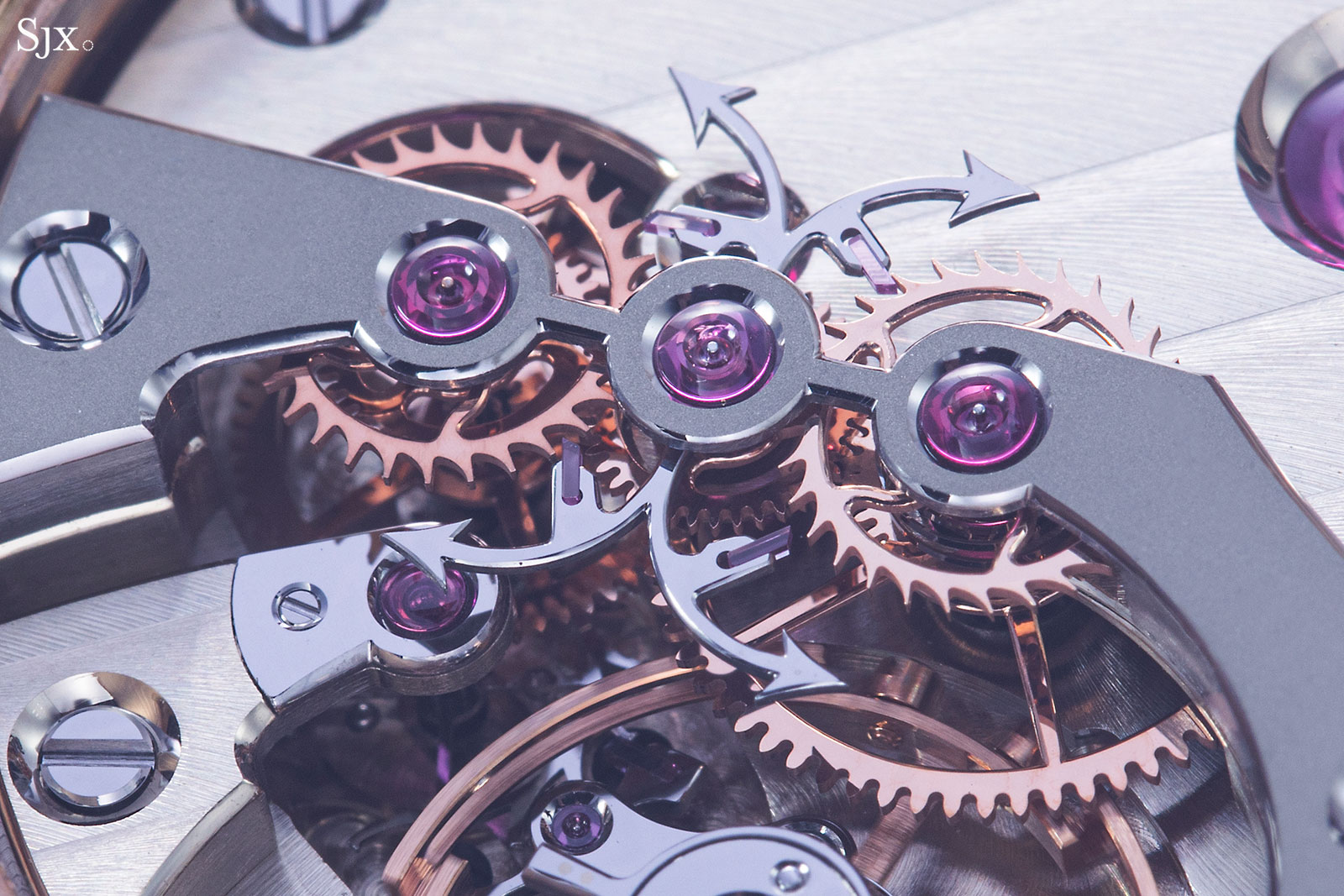 The deadbeat seconds mechanism inspired by a construction devised by Robert Gafner, a teacher at the watchmaking school of La Chaux-de-Fonds in the 1940s 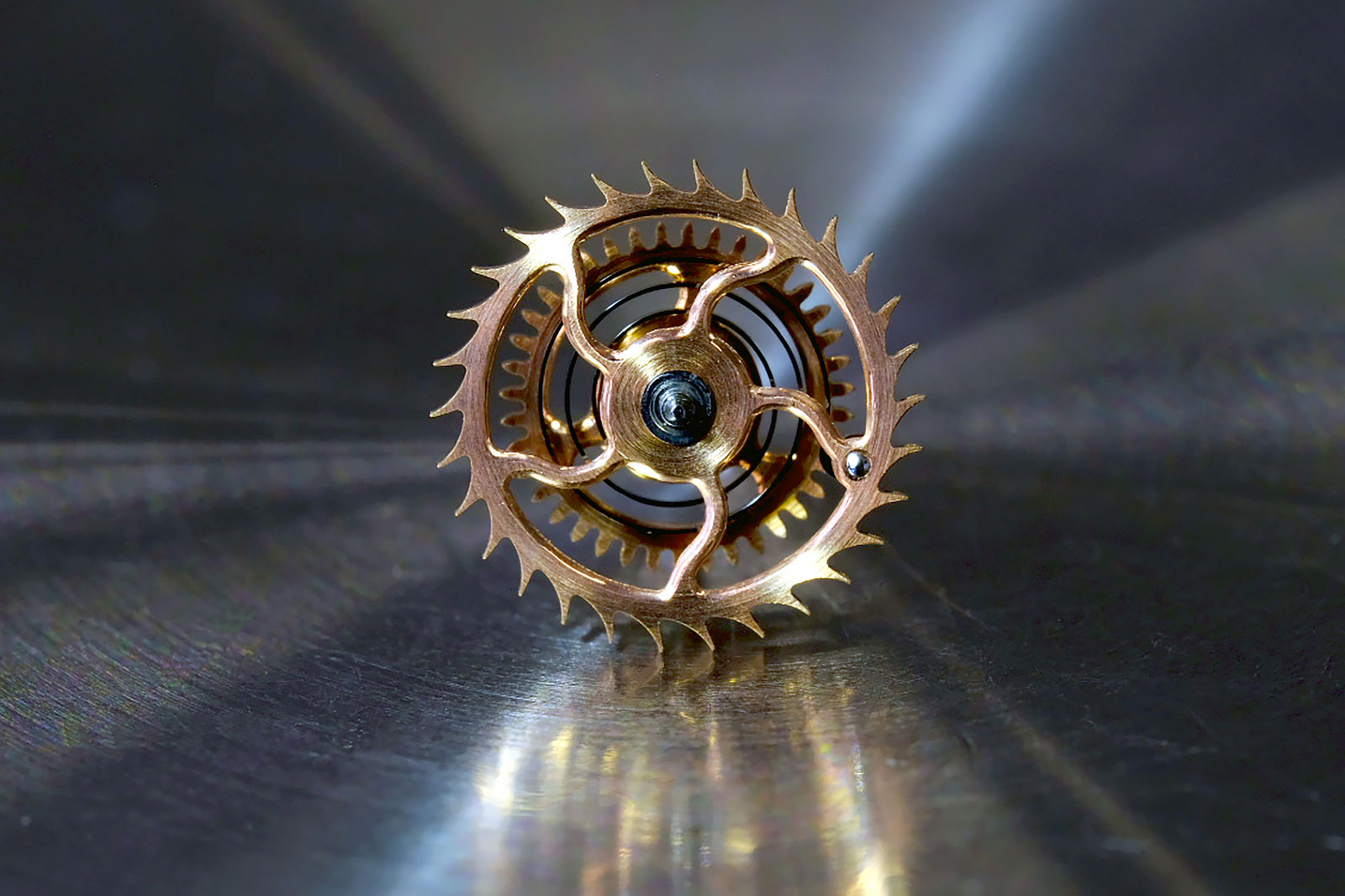 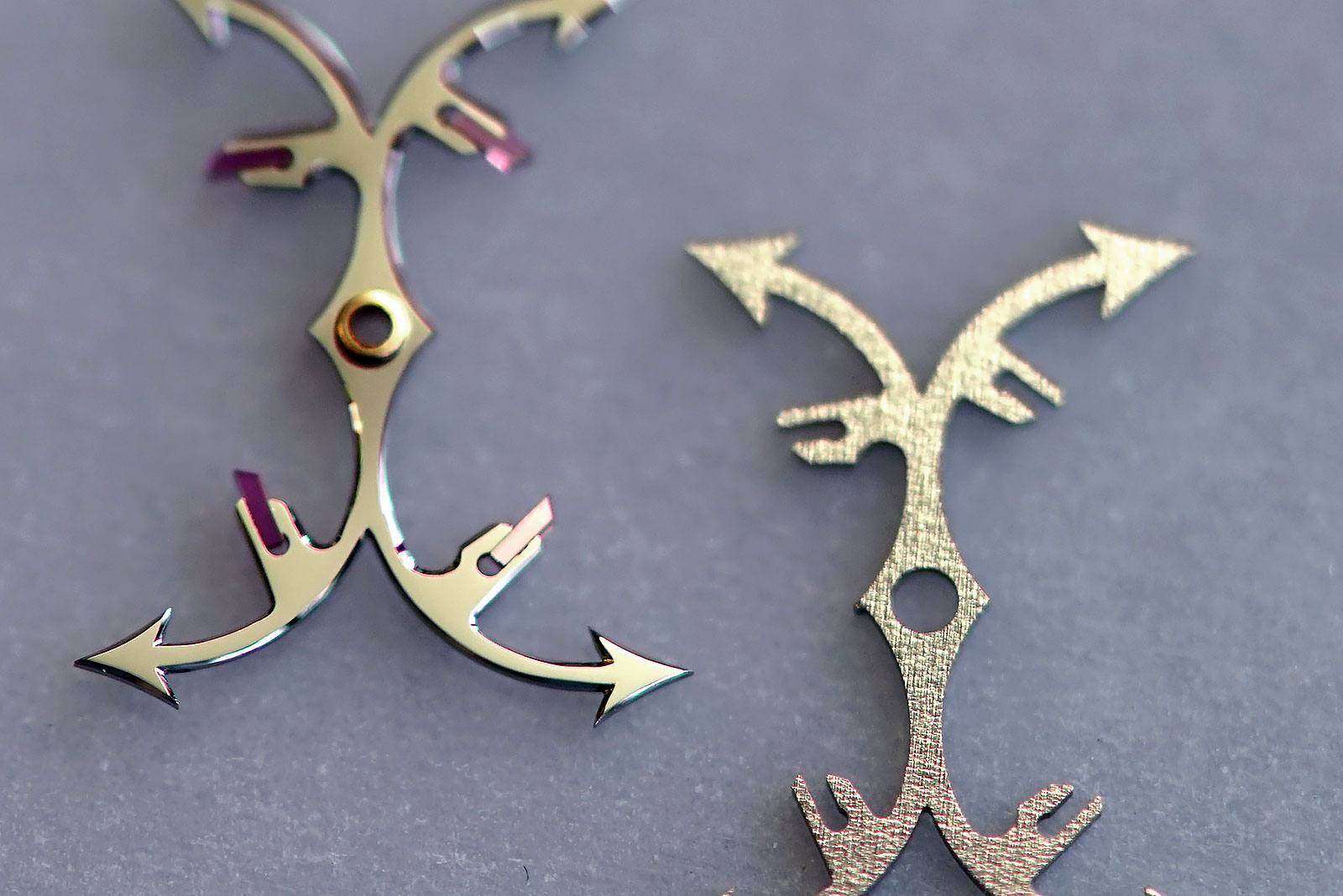 The anchor for the deadbeat seconds escapement. Photo – Petermann Bédat

Clearly a 21st century design with vintage influences, the face-lifted 1967 is a better-looking watch than the original. The new dial is essentially a two-part construction – a central portion in brass that’s been frosted and then bevelled by hand, which is ringed by a clear sapphire chapter ring that carries the hour markings. 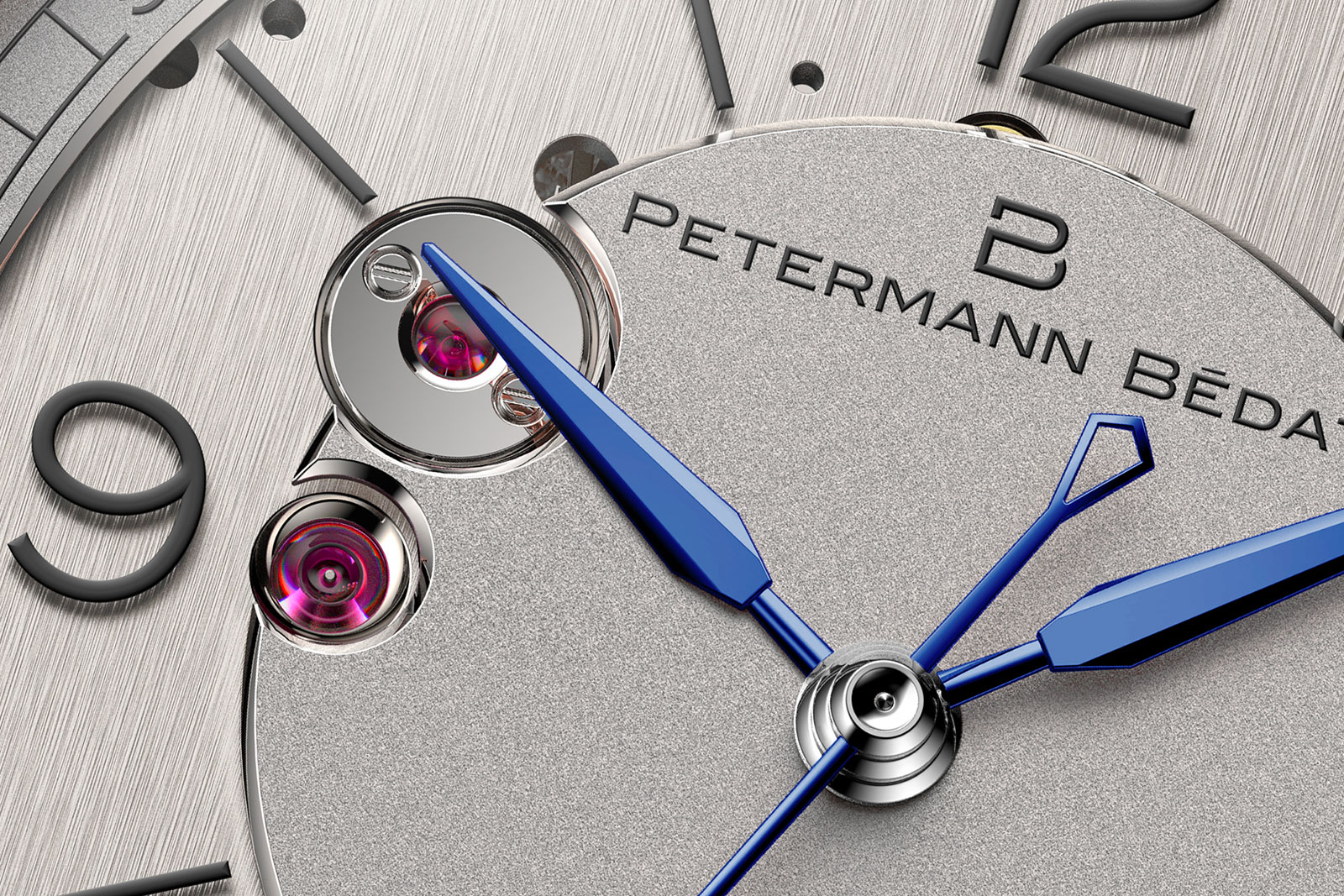 The jewelled bearings for the escape (upper) and seconds wheel. Photo – Petermann Bédat

The central portion also has cut-outs for three jewelled bearings on the main plate that contain the lower pivots for the escape wheel, mainspring arbour, and respectively.

But the highlight on the front is probably the levers of the keyless works, which are all in black-polished steel and visible between two and four o’clock.

To go with the dial, the pair also designed a new style of hands that are lanced shaped, but characterised by wide, flat top and sloping, bevelled flanks. Though the outline of the hands are old school, the details give them a space age feel. 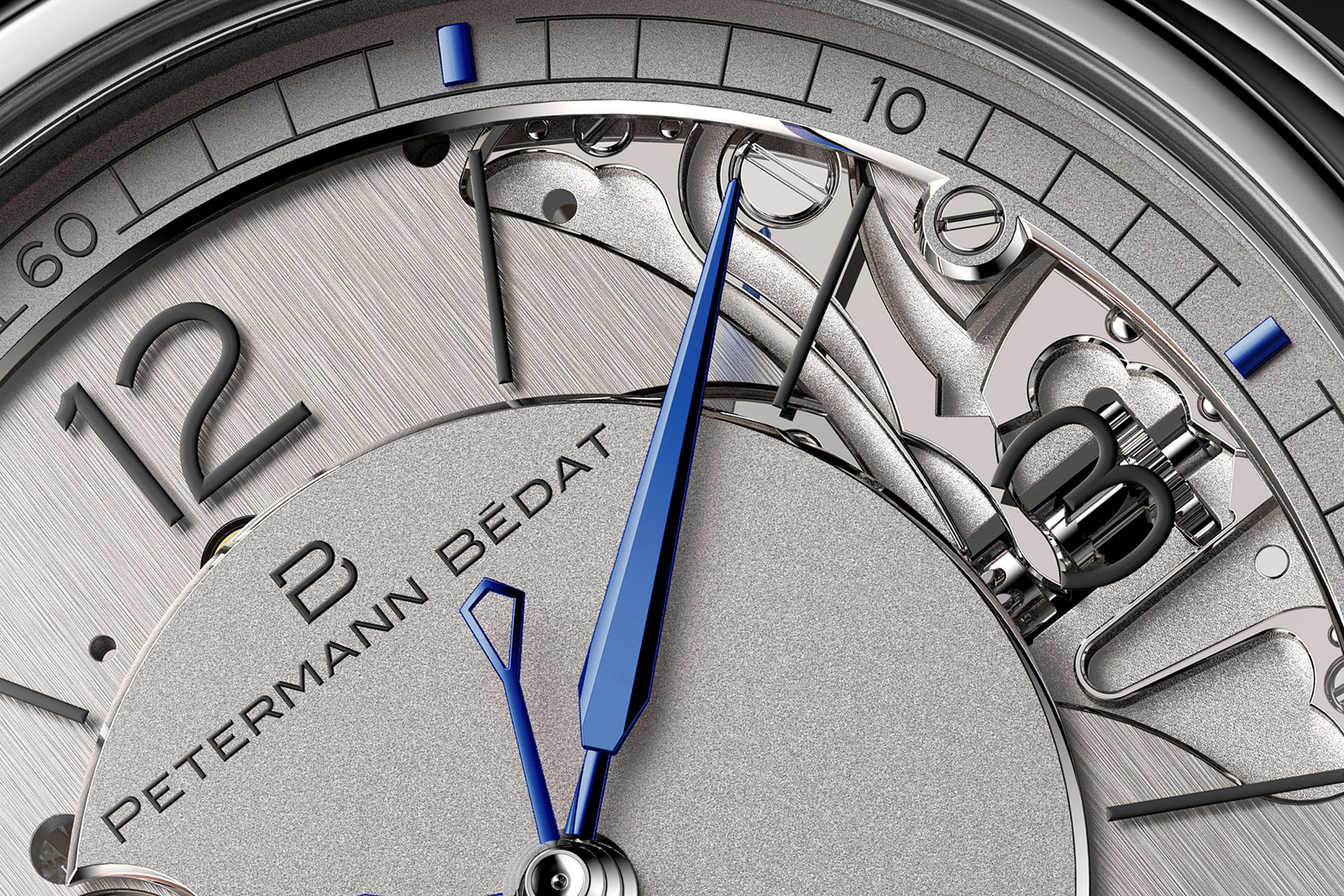 The keyless works, along with the railway minute track that is broken by the five-minute markings, a nod to the “jumping” nature of the seconds indication. Photo – Petermann Bédat 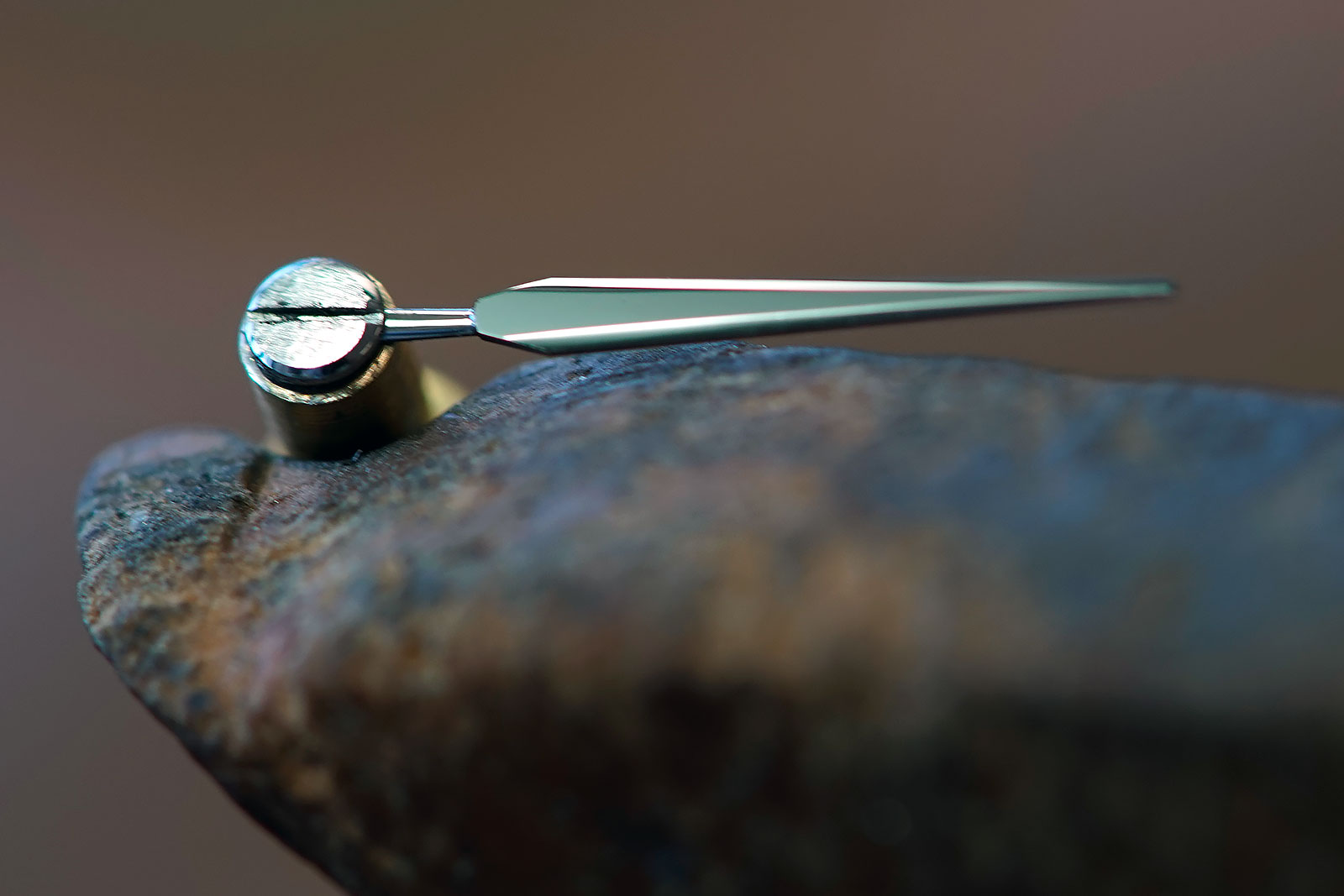 All of the hands are hand made by Petermann Bedat – filed, chamfered, and polished by hand. Photo – Petermann Bédat

Available in white or rose gold, the case remains the same as on the prototype.

It is a moderate, usable size, measuring 39 mm wide and 10.7 mm high. The height is a little more than the average for time-only watches of this genre, a result of the thickness of the movement, which includes the additional height of the deadbeat seconds train.