Jaquet Droz produces some of the most refined artistically-inclined timepieces, typically using a variety of artisanal decorative techniques to express its peculiar aesthetic sensibility inspired by the splendours of nature. Encapsulating the brand’s approach is the new Petite Heure Minute “Tiger” featuring black and ivory grand feu enamel dials that adeptly captures the majestic essence of the tiger with a lifelike miniature painting.

Tiger motifs are not new for Jaquet Droz timepieces; the big cat was found on several other versions of the Petite Heure Minute. But the latest version is easily the most enchanting. While the earlier tiger-motif watches were decorated in the style of a Chinese painting, the new watch depicts the tiger’s gaze up close.

The dial immediately arrests with the lifelike details of the tiger’s eyes that fill the lower half of the dial. Every strand of the tiger’s fur can be discerned, with the highlight undoubtedly the eyes, which reflects the brooding, mysterious and ferocious personality of the feline.

For this reason, I find the white gold version significantly more interesting than its red gold counterpart as the painting is more outstanding; the white brush strokes are enhanced and sharper thanks to the contrast against the glossy black enamel.

The painting is also more appealing as the blue-eyed white tiger is more exotic. Although the painting on the red gold version represents the prototypical, orange-and-black tiger, which feels more natural, it lacks the charm of the enigmatic white tiger.

And because the case is a large 43 mm, the size of the dial also allows the painting to be large enough for prominence at arm’s length. The Petite Heure Minute “Tiger” is ultimately an eye-catching watch that’s a surefire conversation starter.

Each dial complements its respective case metal – the white tiger with its blue eyes in the cool white gold case, while the warm red gold case echoes the colours of its traditionally striped tiger.

Both dials were created in the same way, with tiny brushes, a microscope, and great dexterity. Some of the brushes are tipped with a single hair, required to reproduce the lustrous strands of fur.

The expressive gaze of the tiger – and the personality of the watch per se – was given extra attention. Exceptional skill was required to perfect the nuanced striations of the iris. Such intricate and precise brushwork create an illusion that the tiger is intently gazing at the wearer regardless of the viewing angle.

Starkly different from the evocative painting on the front are the monochromatic mechanics on the back. Inside the watch is the cal. 2653.P, essentially a modernised version of the double-barrel Frederic Piguet cal. 1150 that’s equipped with upgrades like a silicon hairspring and pallet lever. 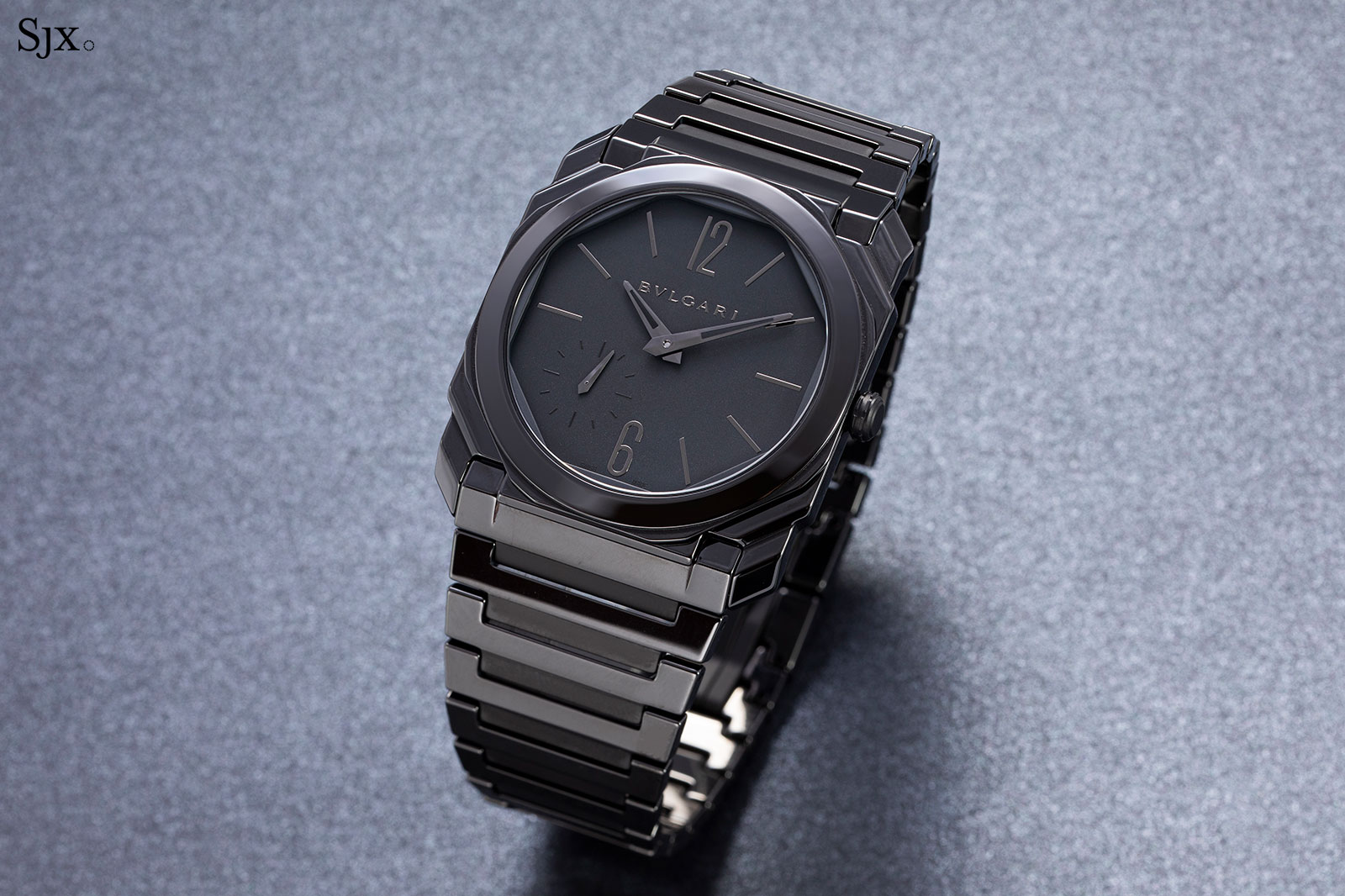 Smart and original in design, the Octo Finissimo is extremely slim, well priced, and a strong seller for Bulgari, which has rolled out many iterations, including one in matte-black ceramic last year. Now Bulgari has added the shiny version to the line up with the Octo Finissimo Black Sandblast-Polished Ceramic.

The new Octo in all its glossy glory is ideal for anyone who found the original ceramic Octo flat and dull.

But I prefer the matte version – the muted look very much suits the style of the watch. At the same time, polished ceramic, especially for a thin and lightweight watch, is too reminiscent of plastic.

That aside, the technical appeal of the ceramic case and bracelet is the same as with the matte model. Both are constructed identically – simple and complex at the same time – differing only in the finish and colour.

Though visually identical to the metal-alloy models, the ceramic Octo has an entirely different construction, which was a necessity due to the material. That’s an appealing factor in itself, because the watch was designed from the ground up as an all-ceramic watch; even the dial is ceramic. The new Octo Finissimo is light and smooth on the wrist. In fact, it is difficult to distinguish the tangible feel of the two ceramic versions from each other, and even from the titanium version.

And like all other versions of the Octo, the new version wears well, with one caveat: wrists below a certain circumference don’t really suit the watch, so it’s worth trying it on before buying. Because the case is wide and flat, on a small wrist the watch feels a bit too much like a biscuit. 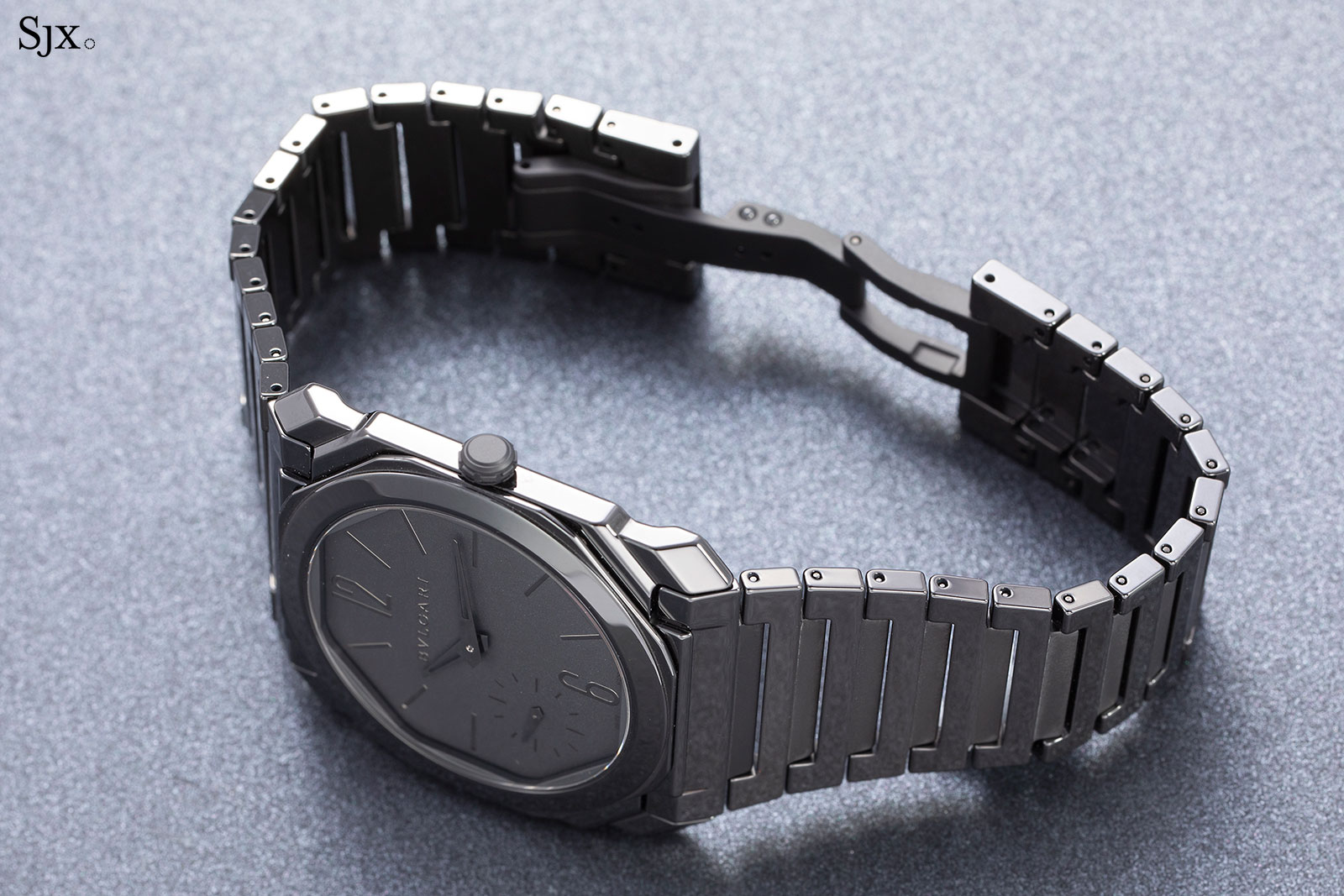 The ceramic Octo is almost entirely ceramic. Except for the movement, hands, and pins for the bracelet, the watch is ceramic though and through, including the dial and clasp.

Because ceramic is hard but brittle, it can’t withstand torsional force, which means no screws can be used in ceramic. The ceramic case middle is instead sandwiched in-between the bezel and back.

The bezel is actually a ceramic cap over a titanium inner bezel, which has tubes to accommodate case back screws, which are actually hex-head bolts. The bolts go in through the back, through the tubes and into the titanium bezel, holding the whole case together. The back with its eight hex-head bolts

Equally notable is the bracelet. In fact, during a conversation earlier in the year, Fabrizio Buonamassa, Bulgari’s talented design chief, said the bracelet was probably the most challenging part of the watch to construct and produce.

The eight links had to be extremely thin – Mr Buonamassa describes them as “absolutely thin” – yet strong enough to be durable. The thinness was straightforward enough to achieve with the titanium bracelet, but altogether more complex for ceramic.

As the links are produced by a process known as sintering – heating ceramic powder in a mould to fuse the powder – getting the exact thinness for the hollow links was difficult, particularly because the links have to be shrunk to the right size and density during the sintering process.

The clasp is also unique to the ceramic version. While the metal versions of the watch have sprung, friction-fit closures that are part of the clasp, the ceramic clasp is rigid and so uses sprung ball bearings instead. 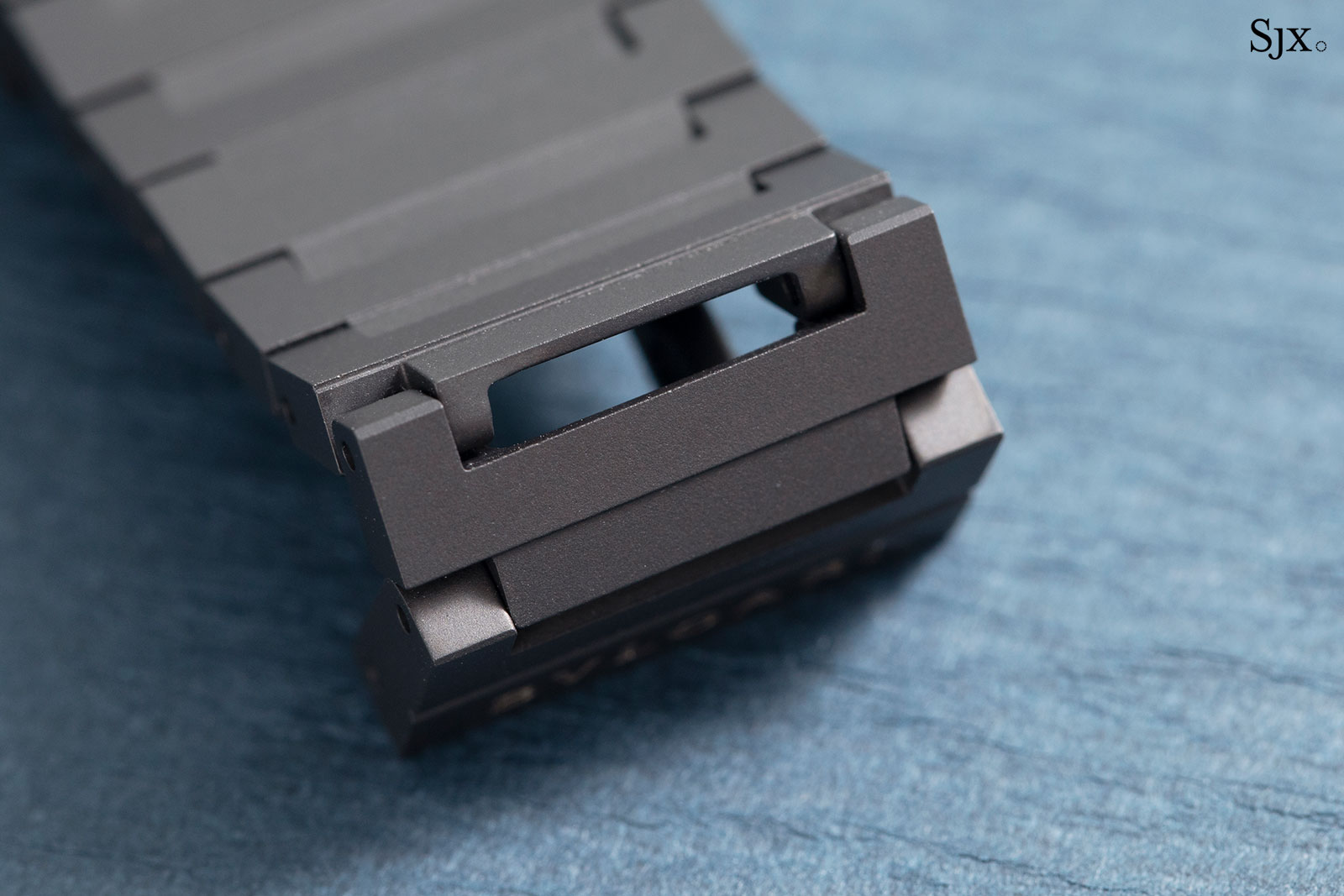 The hollowed out links at the clasp Both versions of the Octo Finissimo in ceramic vary only in colour and surface finish. Though the new Octo is officially “Sandblast-Polished Ceramic”, it is mostly polished, with only the central portions of each link sandblasted to a matte finish. 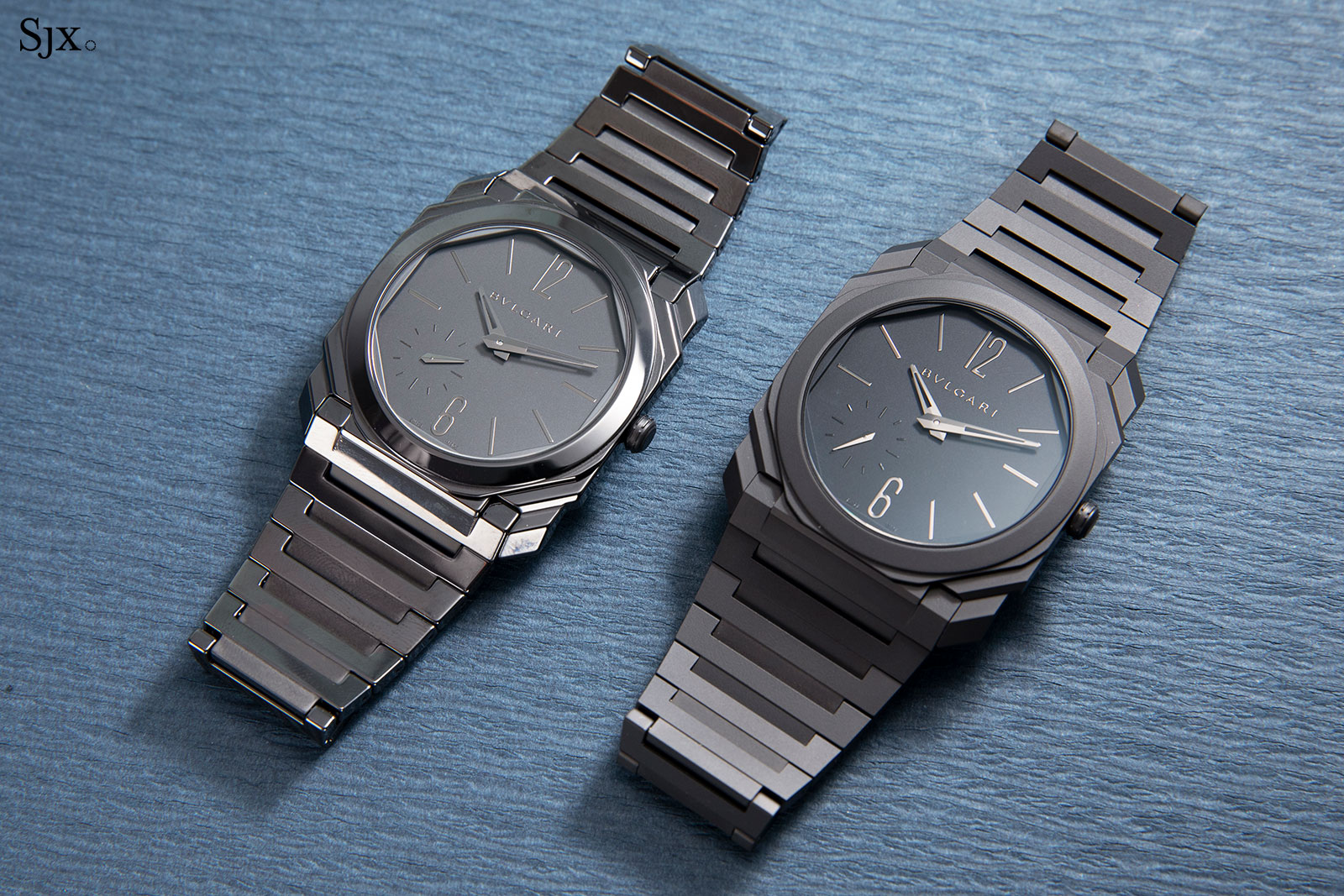 The polished ceramic Octo (left), and its matte counterpart

The rounded edges of the case and bracelet also results in obvious gaps where the components join, namely in between each link as well as where the bracelet meets the case. In fact, the gaps appear more prominent on the polished model than on the matte version.

It is doubtlessly an optical illusion due to the rounded edges – I’m certain tolerances are the same for both versions – but the gaps are more apparent. 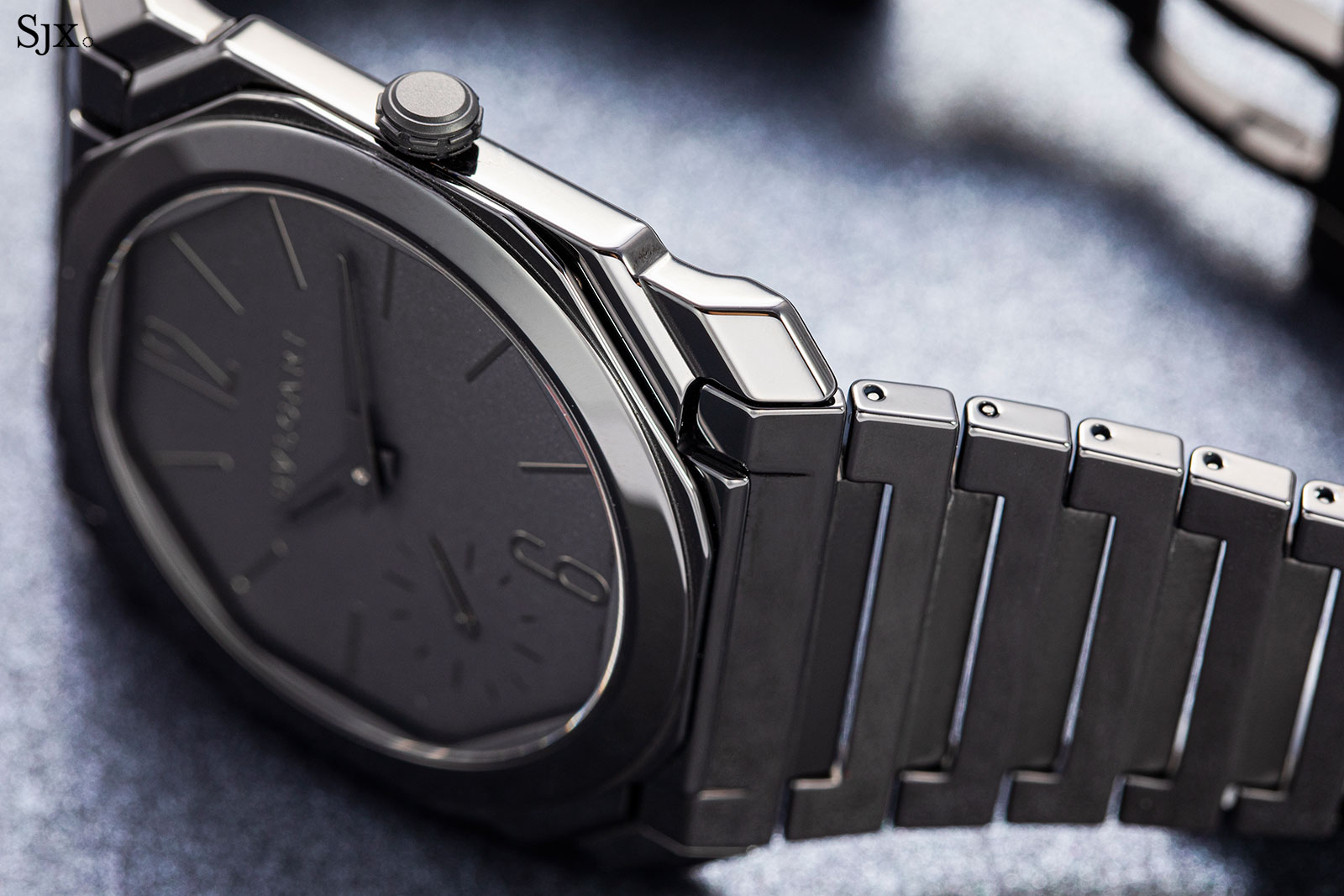 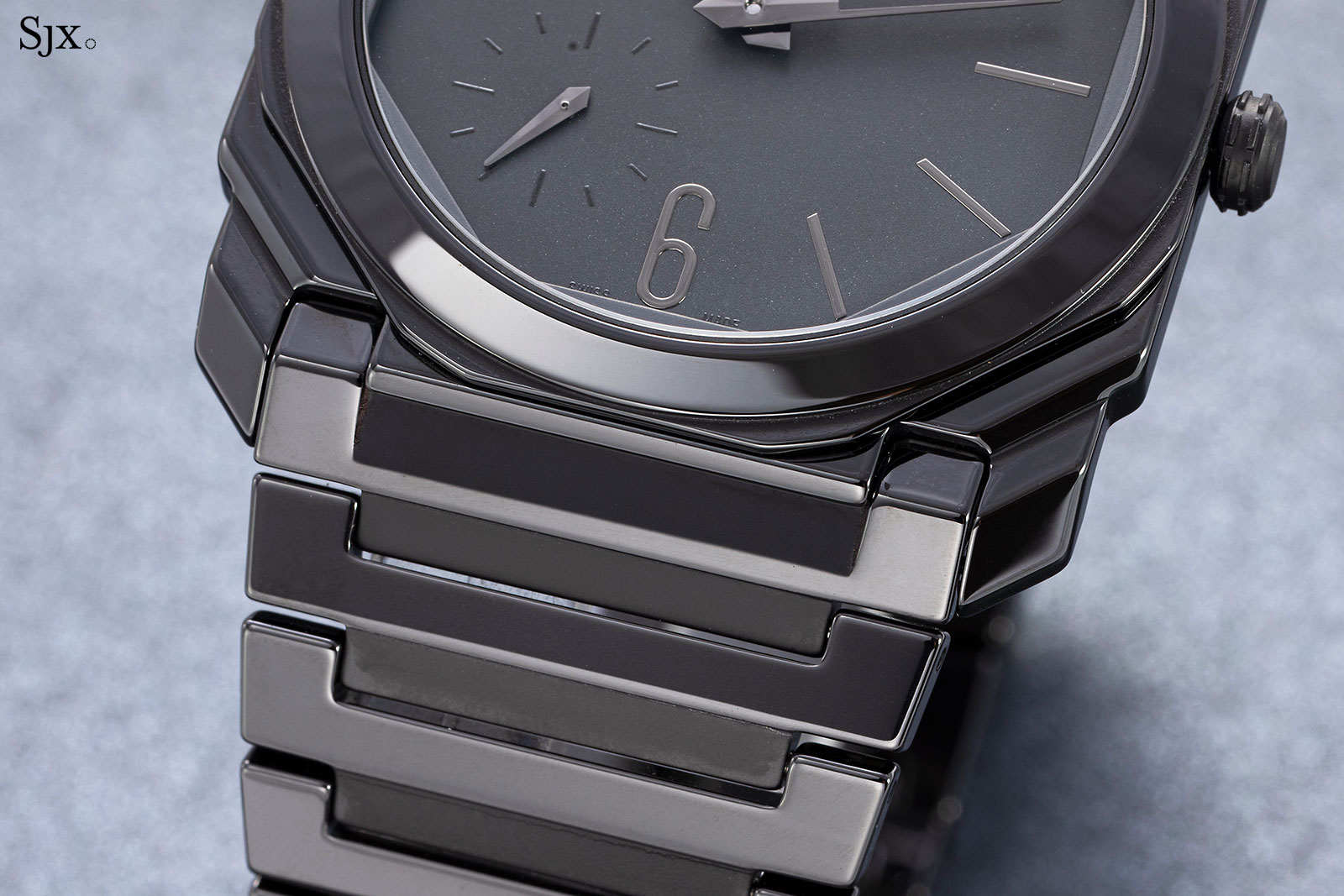 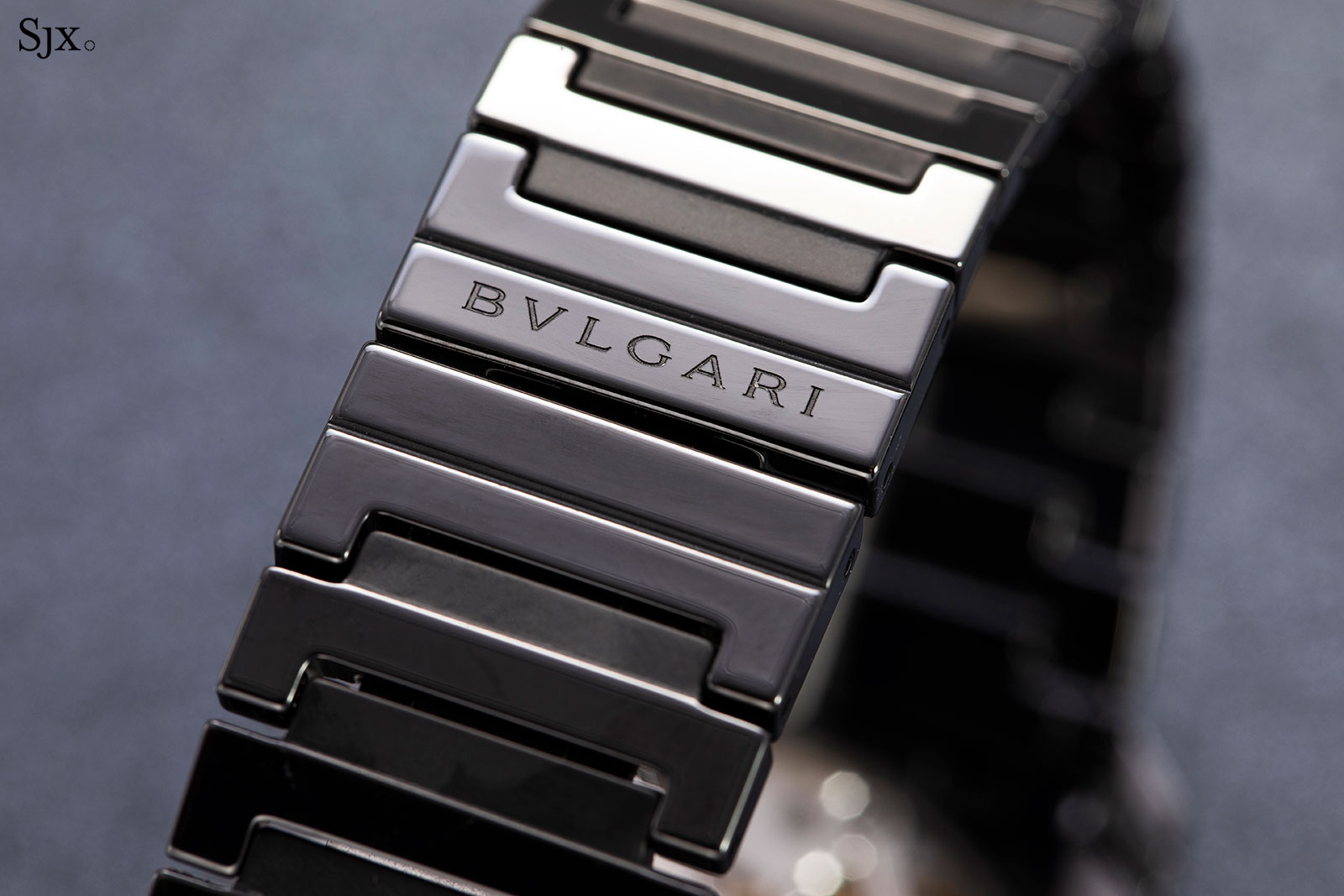 Made of ceramic, the dial is smartly done in different shades and textures, giving it good legibility, despite the lack of colour.

The dial is a matte dark grey, while the hands and hour markers are a glossy medium grey, allowing them to catch the light and stand out against the dial. And in a smart detail reflecting the thought that went into its design, the subsidiary seconds track is printed in matte black, separating it from the rest of the dial markings. 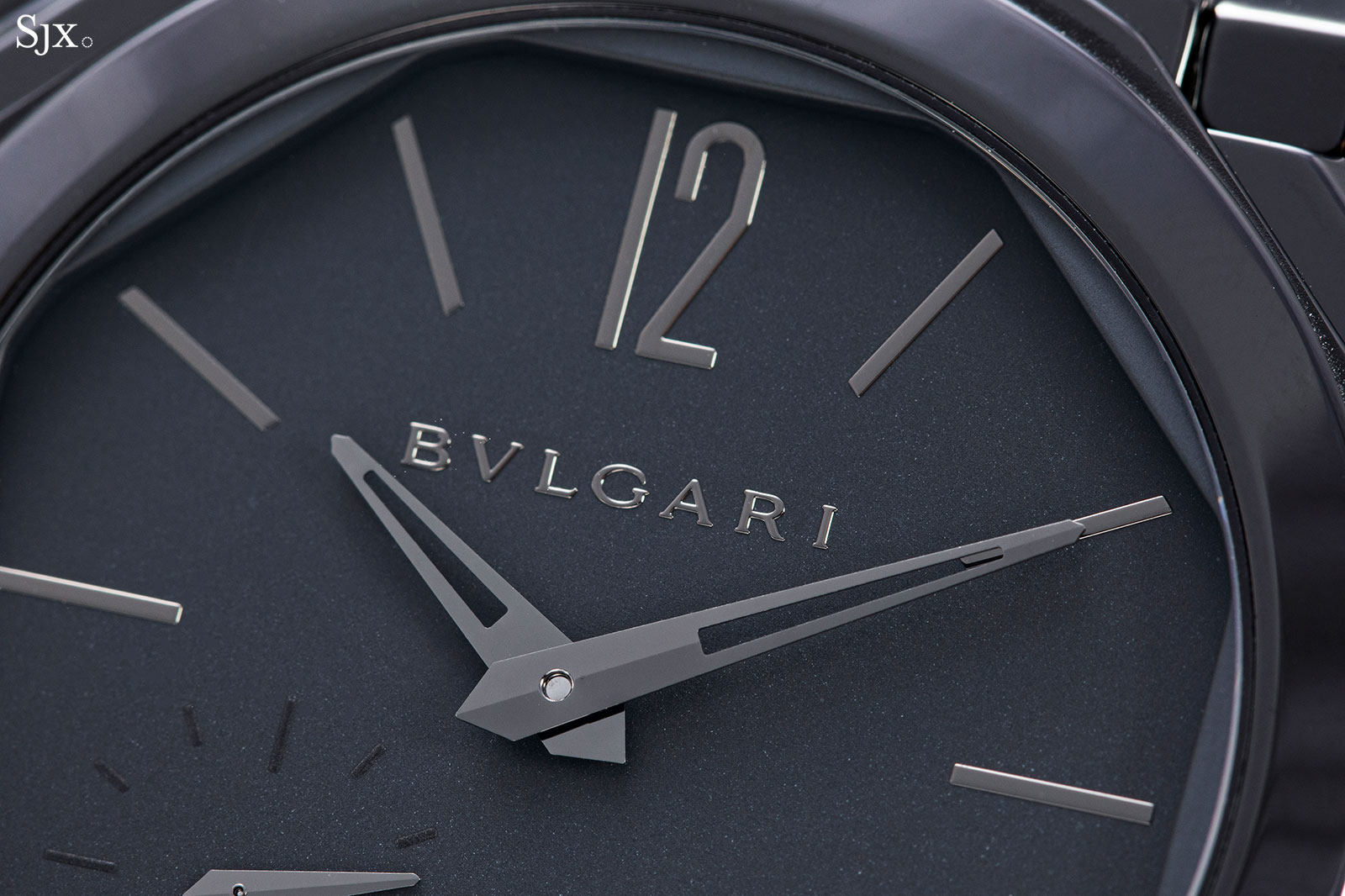 The thinnest automatic movement on the market, the BVL138 inside manages a power reserve of 60 hours, thanks to the largish barrel that’s combined with a very small balance wheel.

But more interesting than the running time is the its construction, which is thin yet reasonably robust. Some of the features designed to strengthen the movement can be discerned from the back.

One of the more obvious is the balance bridge. For stability – a more pressing requirement in a thin movement with even thinner parts – the balance is secured on both sides by a bridge, instead of the more common cock that is anchored on just one side.

Less obvious are the extra jewels in the barrel bridge – there appear to be seven in addition to the one for the mainspring arbour – which are presumably to stop any movement parts from grinding against the underside of bridge. The balance bridge with its simple stud and regulator A downside of the movement’s construction is it visual flatness; the view from the back is dominated by four large bridges that look modern and functional for a plain overall look.

Up close, it gets a bit more interesting. The finishing is attractive and slightly above average for a watch in this price range, which means neat, clean, and done by machine. The bevels on the edge of the bridges, for instance, are mirror polished, while the perlage on the base plate below the rotor and balance wheel is fine in size and application. Whether or not you like the polished finish, the slim construction of the ceramic case and bracelet is impressive. Combine that with the movement, and the result is a watch that is fairly priced for what it is. Plus the enormous variety of Octo Finissimo models – which admittedly diminishes the appeal of the watch a little – also means there’s an iteration to suit almost any preference. Availability: At both retailers and boutiques
Price: US$15,600, or 22,000 Singapore dollars