Kiu Tai Yu (1946-2020) was famed for achieving several firsts in watchmaking. He was the first watchmaker in Asia to build a tourbillon wristwatch – he debuted the Kiu Tai Yu tourbillon no. 1 in 1991 – and also the first Asian member of the Académie Horlogère des Créateurs Indépendants (AHCI).

Working out of a tiny shop named Kew & Cie. in Hong Kong’s Central business district, Kiu did one better after building conventional tourbillons – he invented his very own Mystery Tourbillon that had neither a cage nor visible bridge, for which he was granted patents in China, Switzerland, and the United States.

Though he was inactive since 2007 when he suffered a stroke, Kiu was prominent internationally in the 1990s, being a regular at Baselworld where he exhibited his exceptionally distinctive watches. His timepieces encapsulated his philosophy of watchmaking – he did it his way. 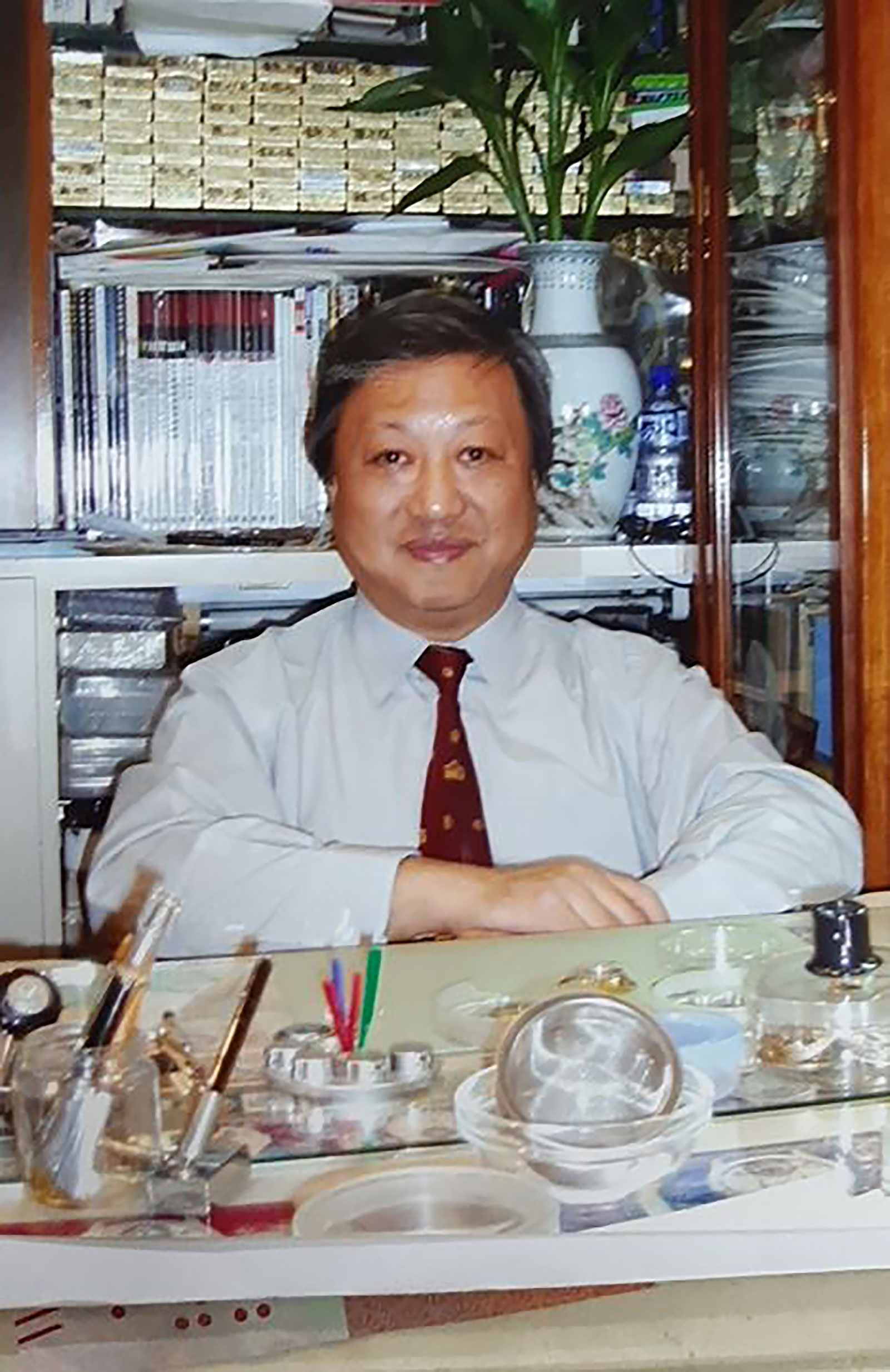 The aesthetic of his watches was strikingly Chinese and evocative of a particular period in East Asia. It was not so much the elegant, classical style of historical China, but the over-the-top, exuberant look of Hong Kong and Macau in the late 20th century, the sort one might have found in a high-end Macau casino in the 1980s.

Though Kiu’s aesthetic was a bit much – it is red – the watches have their own charm, especially given the backstory. Kiu’s watches were very much a product of a time and place, both of Hong Kong and the then-nascent independent watchmaking industry. 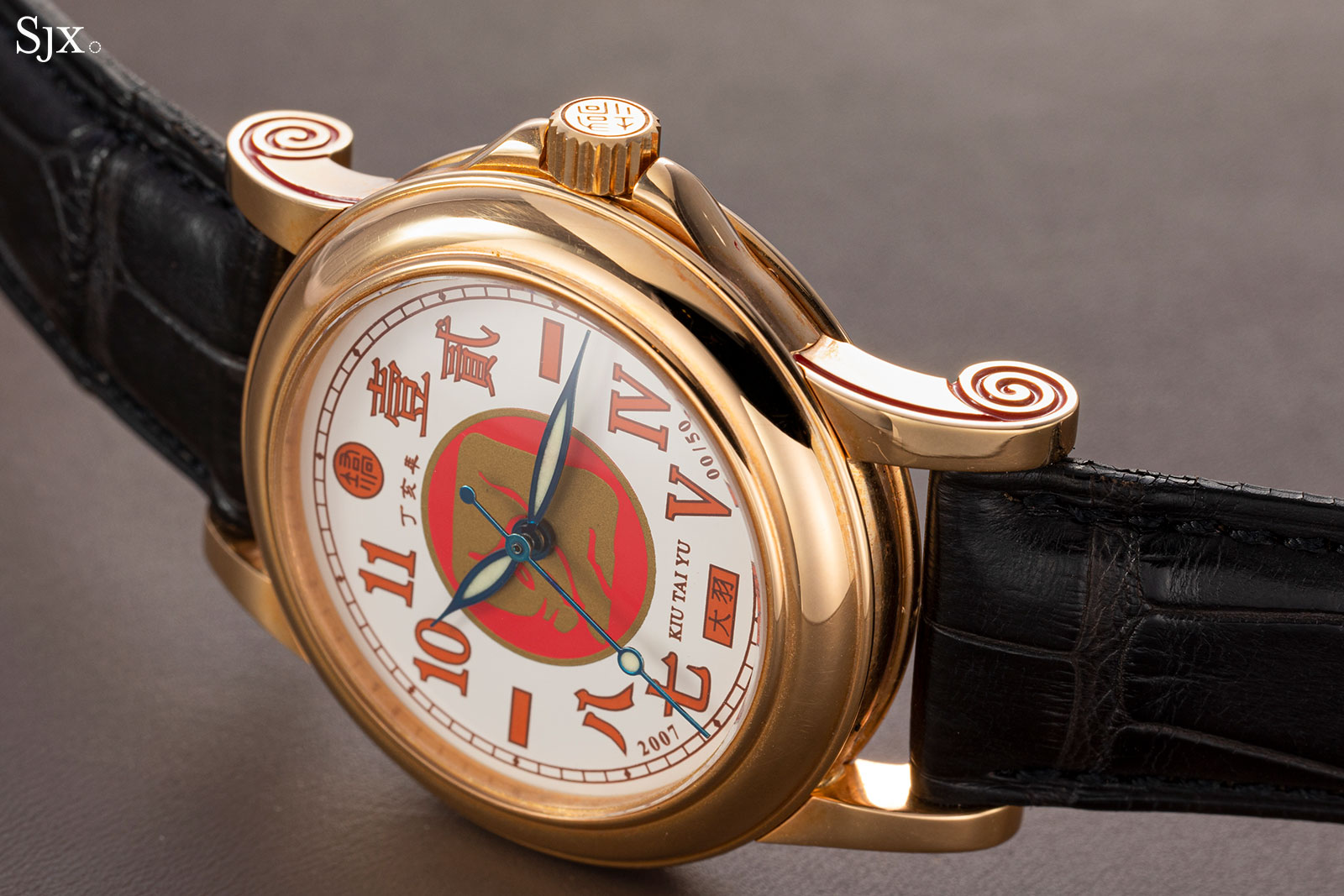 Unsurprisingly, Kiu found a ready audience who appreciated the excessive style, notably in Japan and as faraway as the United States, which meant a long wait for his watches – if he deigned to sell you one.

Besides being selective as to who his clients were, Kiu’s output was small as his main business was repairing and selling antique pocket watches and clocks. As a result, his watches, even the serially-produced editions, are rare.

The Year of the Pig

One of the serially-produced models were the annual limited editions with a Chinese zodiac theme. Essentially the entry-level Kiu Tai Yu watch, the zodiac editions shared the same case (either in rose or white gold) and dial design (either in black or white), with the only difference being the zodiac emblem on the dial.

Each edition was limited to 50 watches – though far fewer were actually made – and perhaps the last zodiac edition he unveiled before his illness was the Year of the Pig Commemoration, which was made in 2007. This Year of the Pig watch is owned by an important collector who journeyed to Hong Kong in 2007 to persuade Kiu to sell him a watch. He was successful, and even managed to order another wristwatch, but unfortunately Kiu fell ill before the subsequent watch was completed.

Though the collector owns significant timepieces produced by noted independent watchmakers like Roger W. Smith, De Bethune, and Voutilainen, watches that are both more valuable and more complicated, the Year of the Pig wristwatch is dear to him because of its unusual design and the man who created it – a testament to Kiu’s inimitable personality.

The Year of the Pig is a small watch – just 35 mm in diameter – but it has a big personality. While the movement inside is a stock and uninteresting ETA, the case is well executed and the look is classic Kiu Tai Yu. Given what it costs when new, around US$8,000 according to the owner, it was fairly priced. 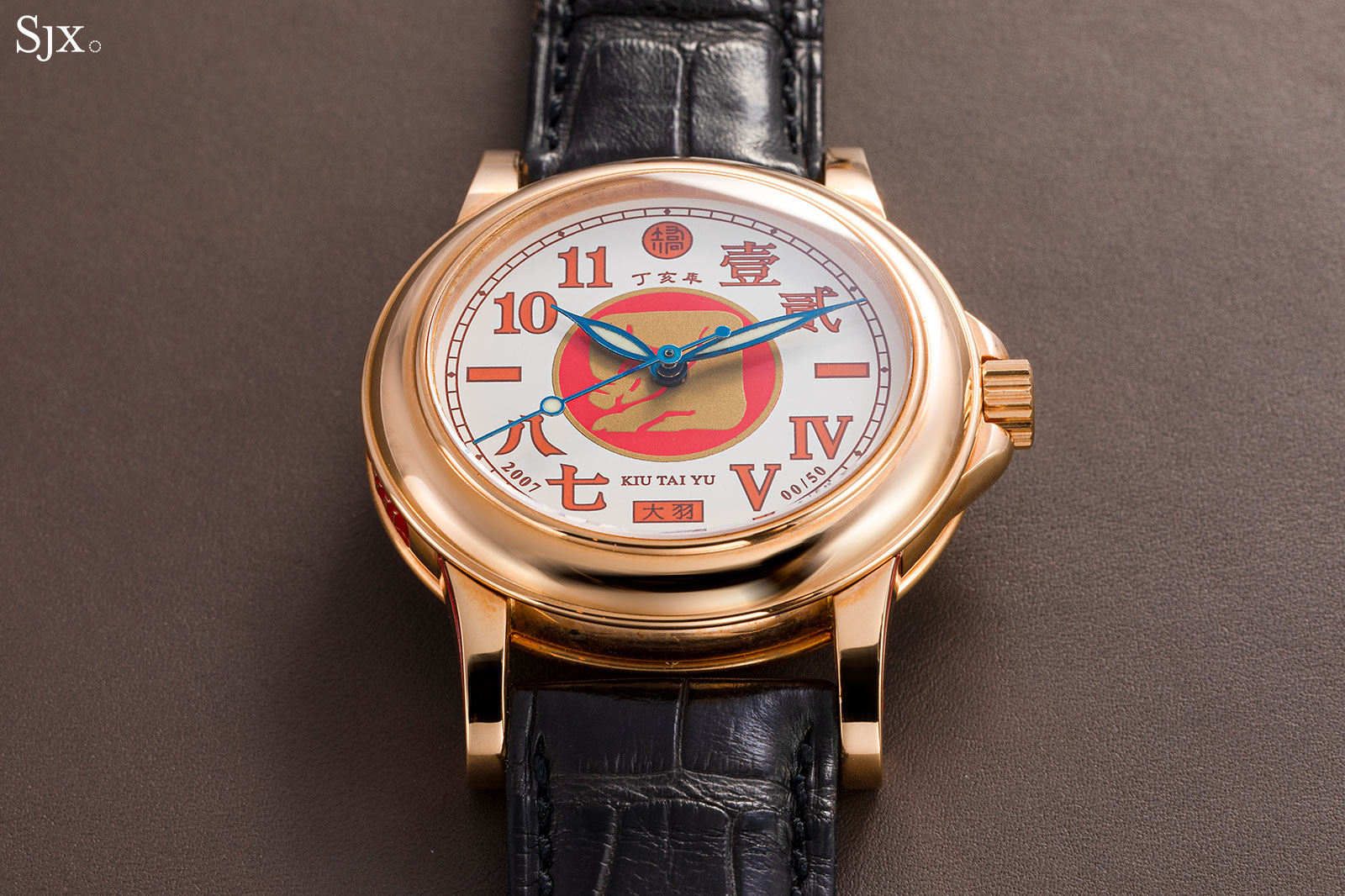 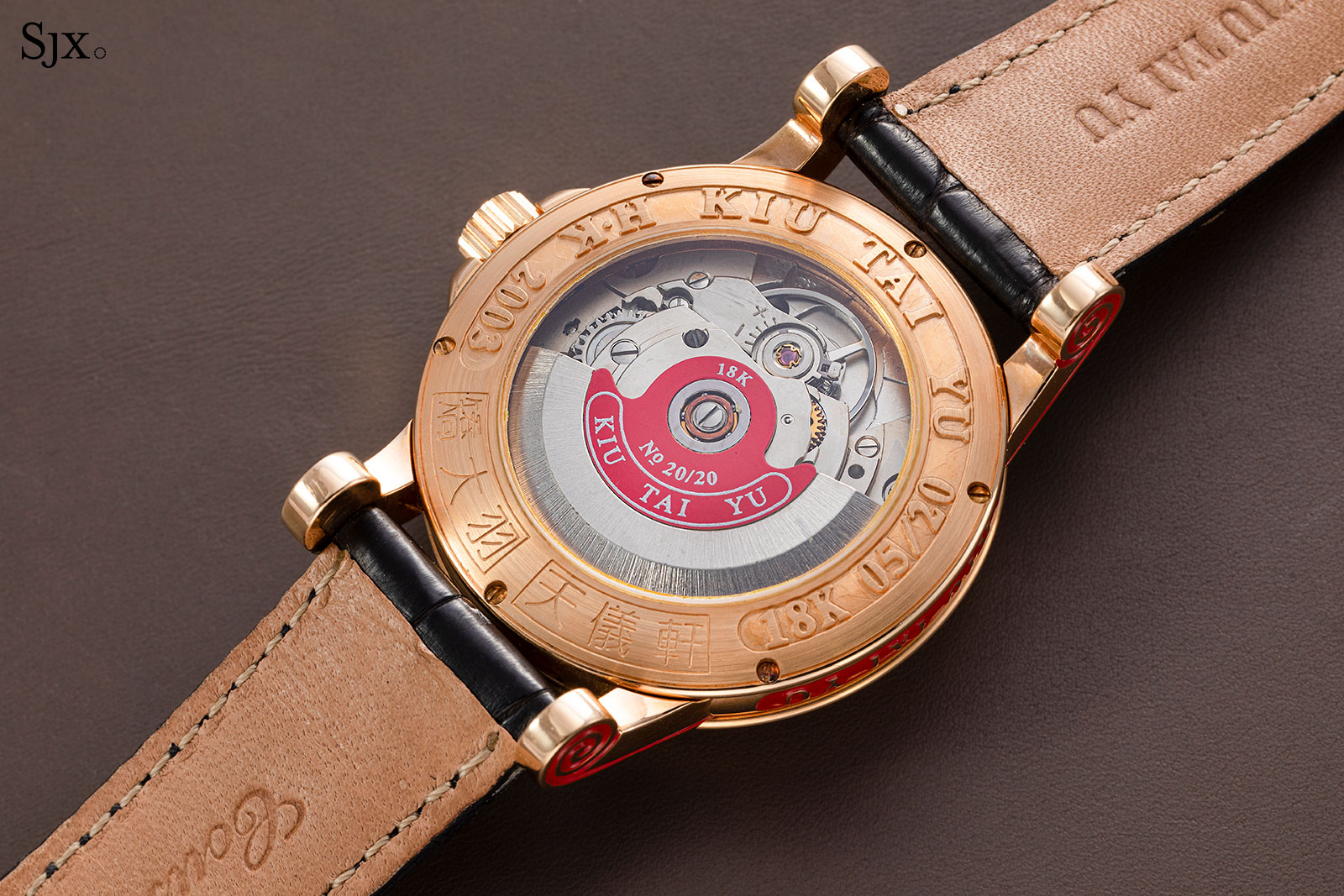 The dial of the watch is a peculiar variant of the “California” dial. It has a lot going on.

Firstly, it combines five different types of hour markers – numerals in four different scripts plus batons for the quarters.

Conventional Arabic and Roman numerals occupy half the dial, with simplified Chinese characters for seven and eight, along with upper-case Chinese numerals (大写) that are typically used for financial notations for one and two. 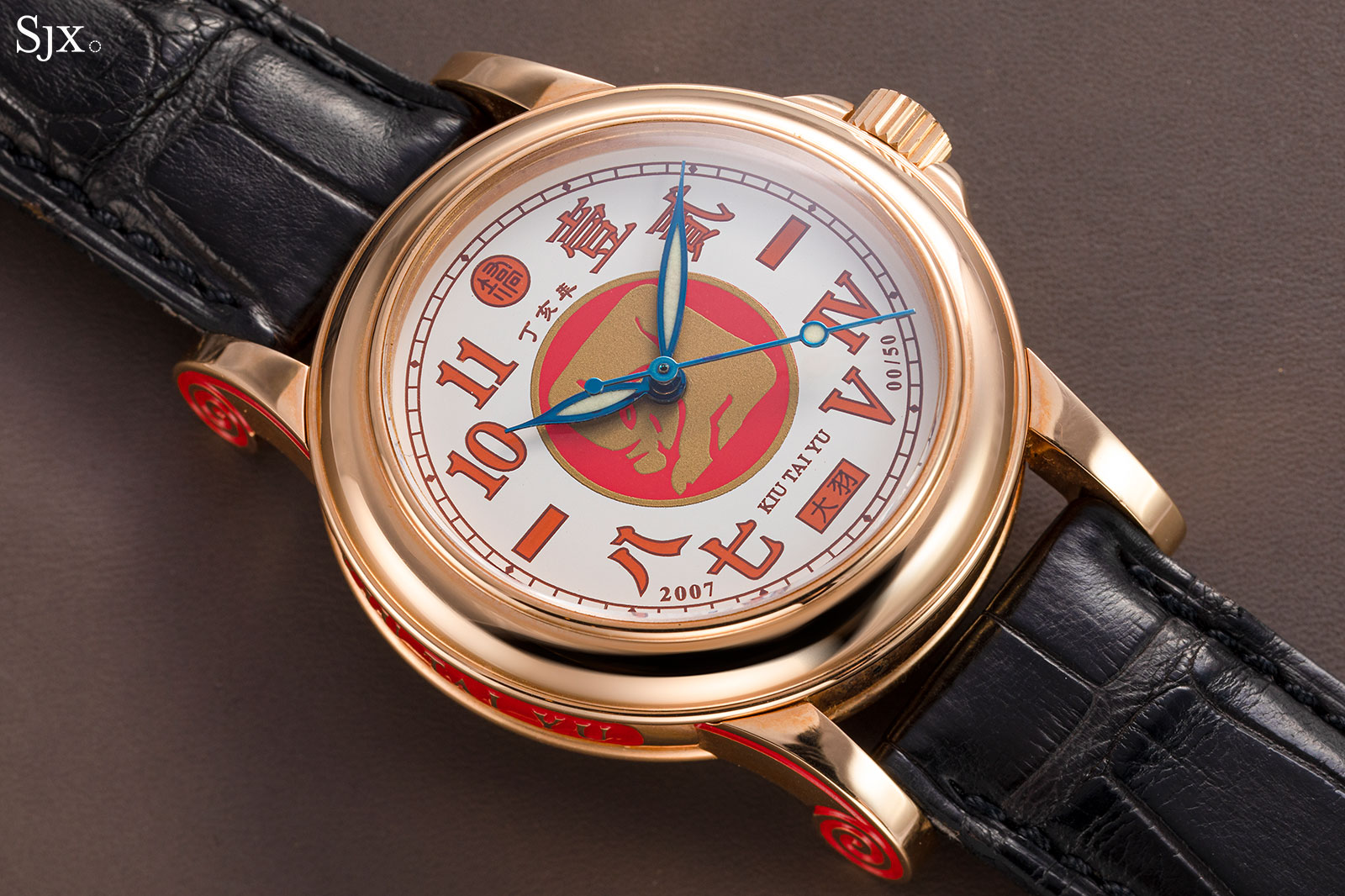 And then there is the branding and zodiac notation – in the centre of the dial is a stylised porcine emblem depicting a pig’s head and two forelegs.

Inside a red circle at 12 o’clock is Kiu’s family name, “矯”, with his first name, “大羽”, in a box at six o’clock, with his Romanised name above. And the characters just below his family name are “丁亥年”, which means “year of the Fire Pig”, the elemental sign for the 2007 zodiac. 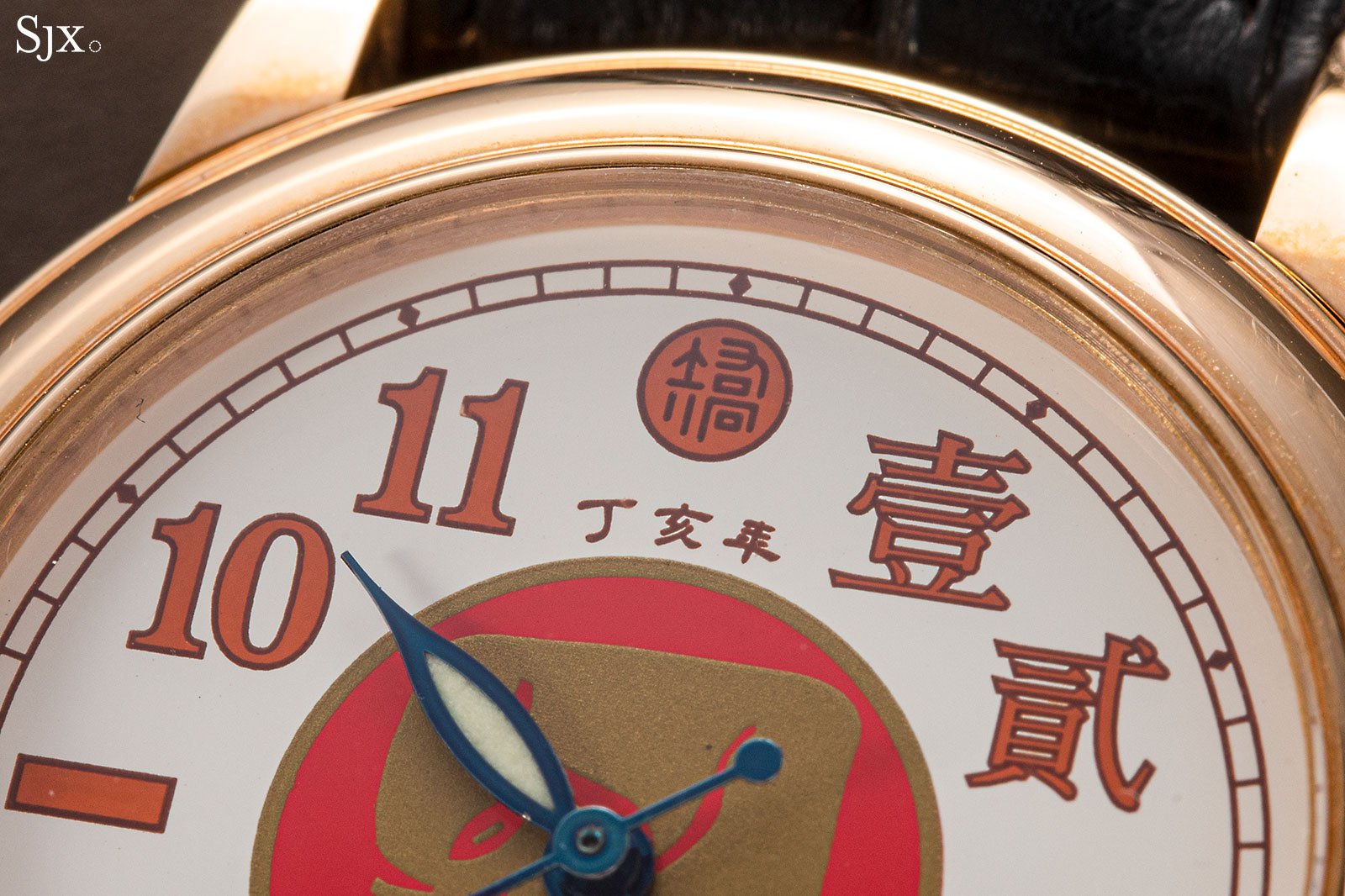 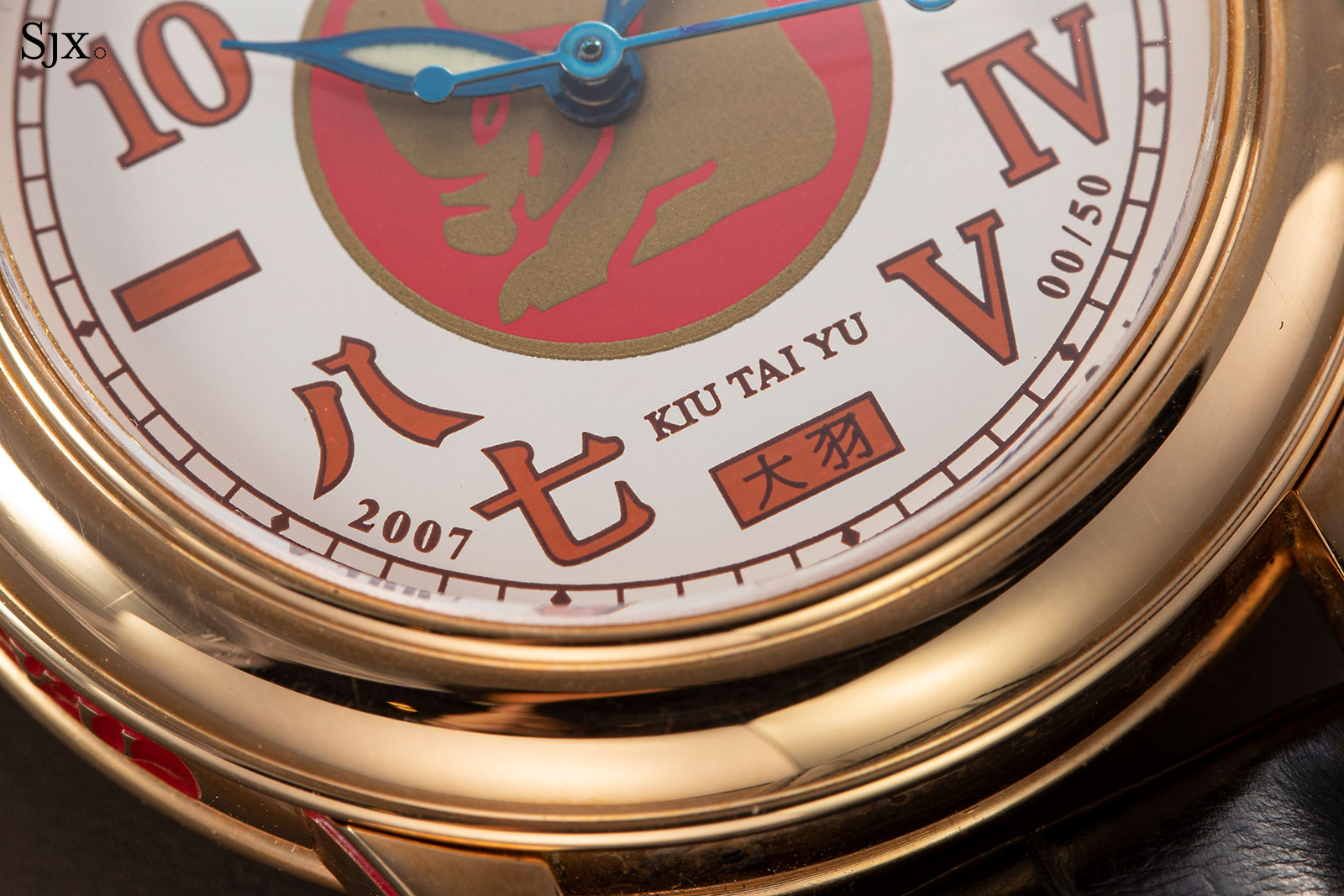 Though the dial design is too much, the execution is high quality. Despite being tiny and complex inform, the Chinese characters are surprisingly sharp, even under magnification.

Oddly enough, the hands are entirely classical – leaf-shaped and blued steel with luminous fill. Because the hands are large and contrast strongly against the dial, legibility is excellent. Like the dial, the case is excellent quality. Most probably having been produced by a specialist supplier in Switzerland, the case is hefty, rigid, and well made. It has long lugs with engraved with curlicues that are filled with red enamel, along with the maker’s name in relief, again in red enamel.

There is a lot of red enamel on the case, and even on the buckle, which is equally well constructed. Even though the look is a bit much, it is elaborated decorated with the sort of metiers d’art found on expensive watches today. 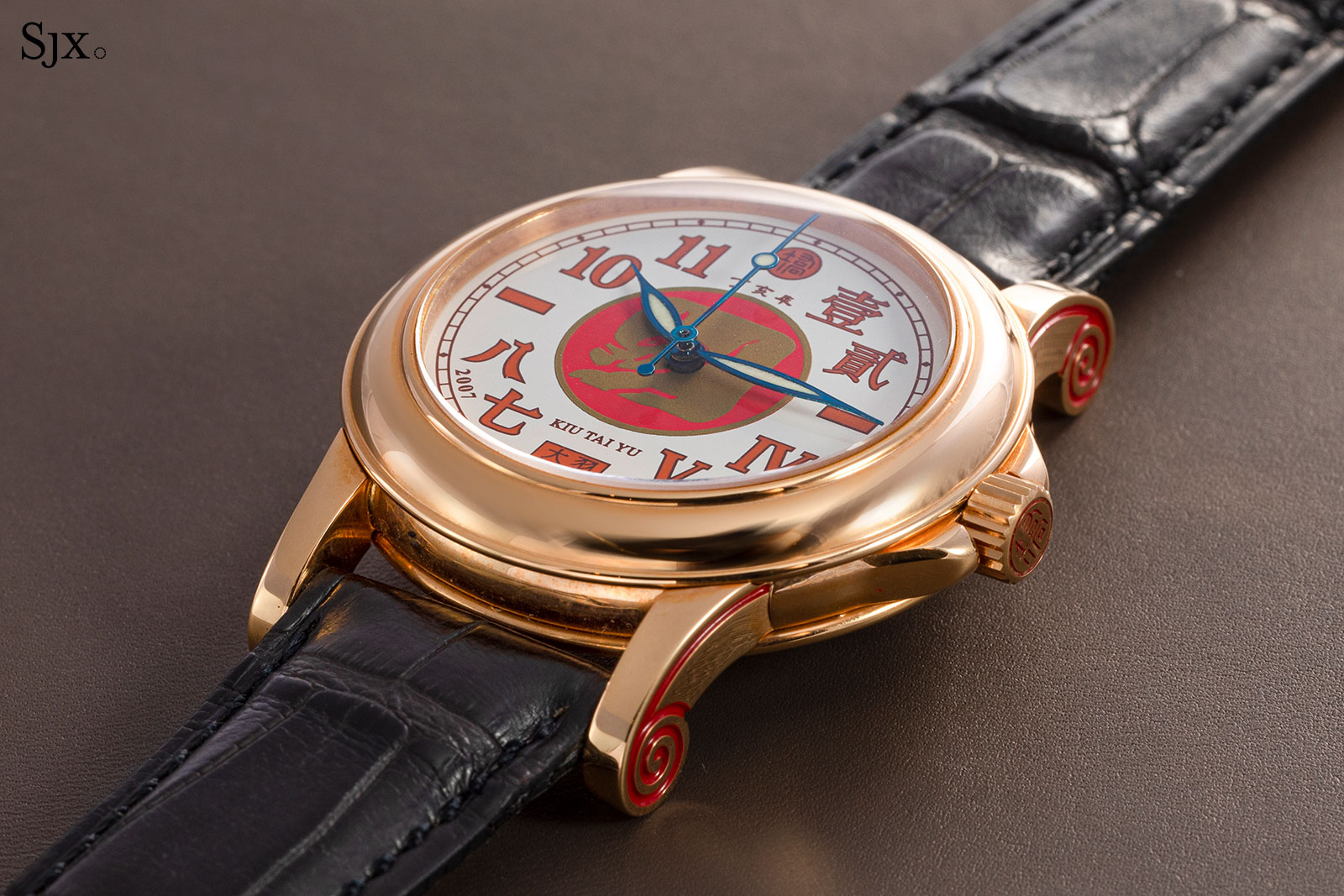 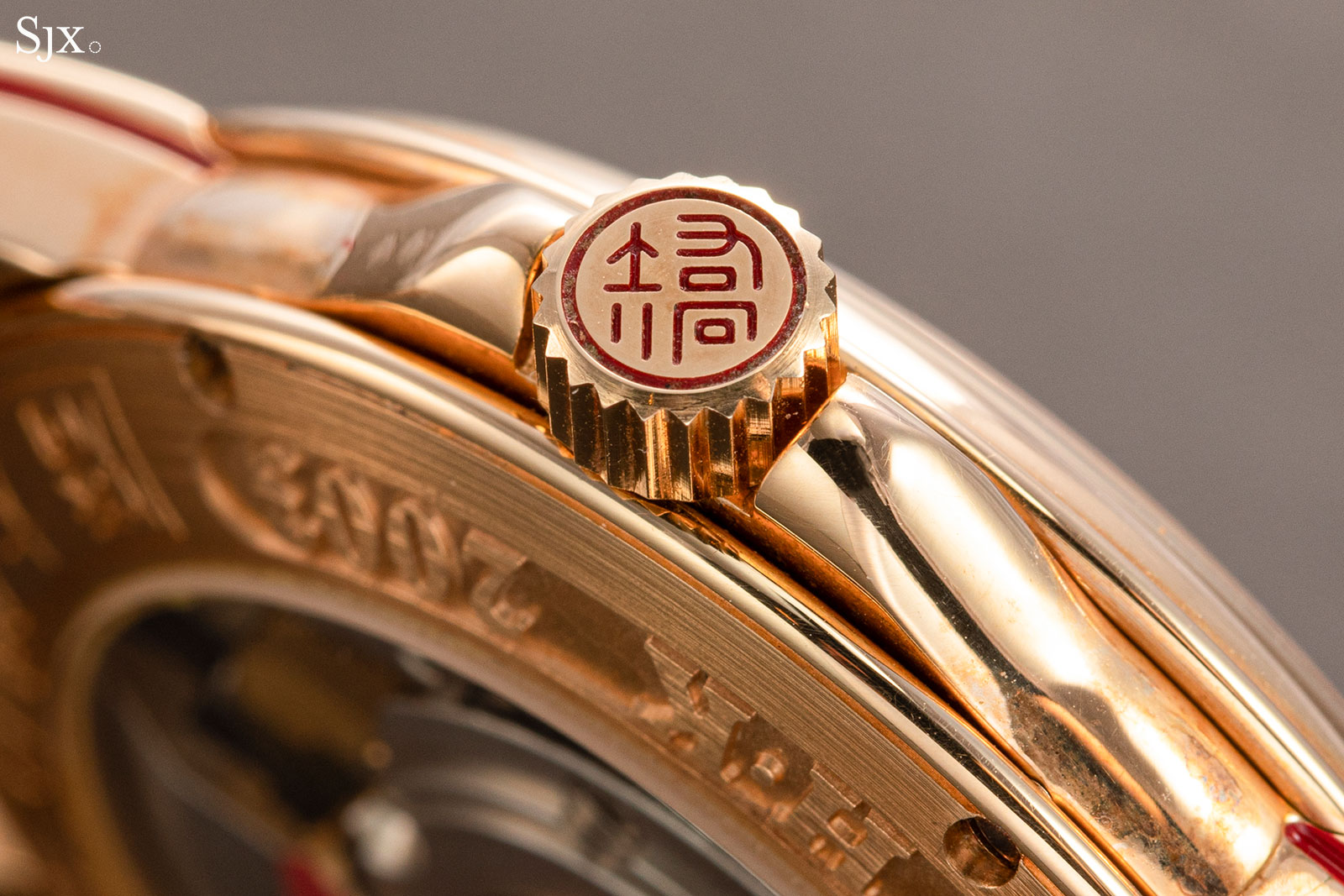 Even the hallmark on the buckle is an extra-large, red-enamelled “18K”

The case back is also of high quality, with the markings executed in high relief on the rim. But it reveals a curious feature of this watch (which recurs on other examples of the zodiac series): every element of the watch that is numbered is numbered differently.

The back is “05/20”, the rotor is “20/20”, and the dial is “00/50”. According to the owner, that was because Kiu assembled watches from his stock of components without paying much heed to matching the numbers. Kiu did, after all, do things his way. 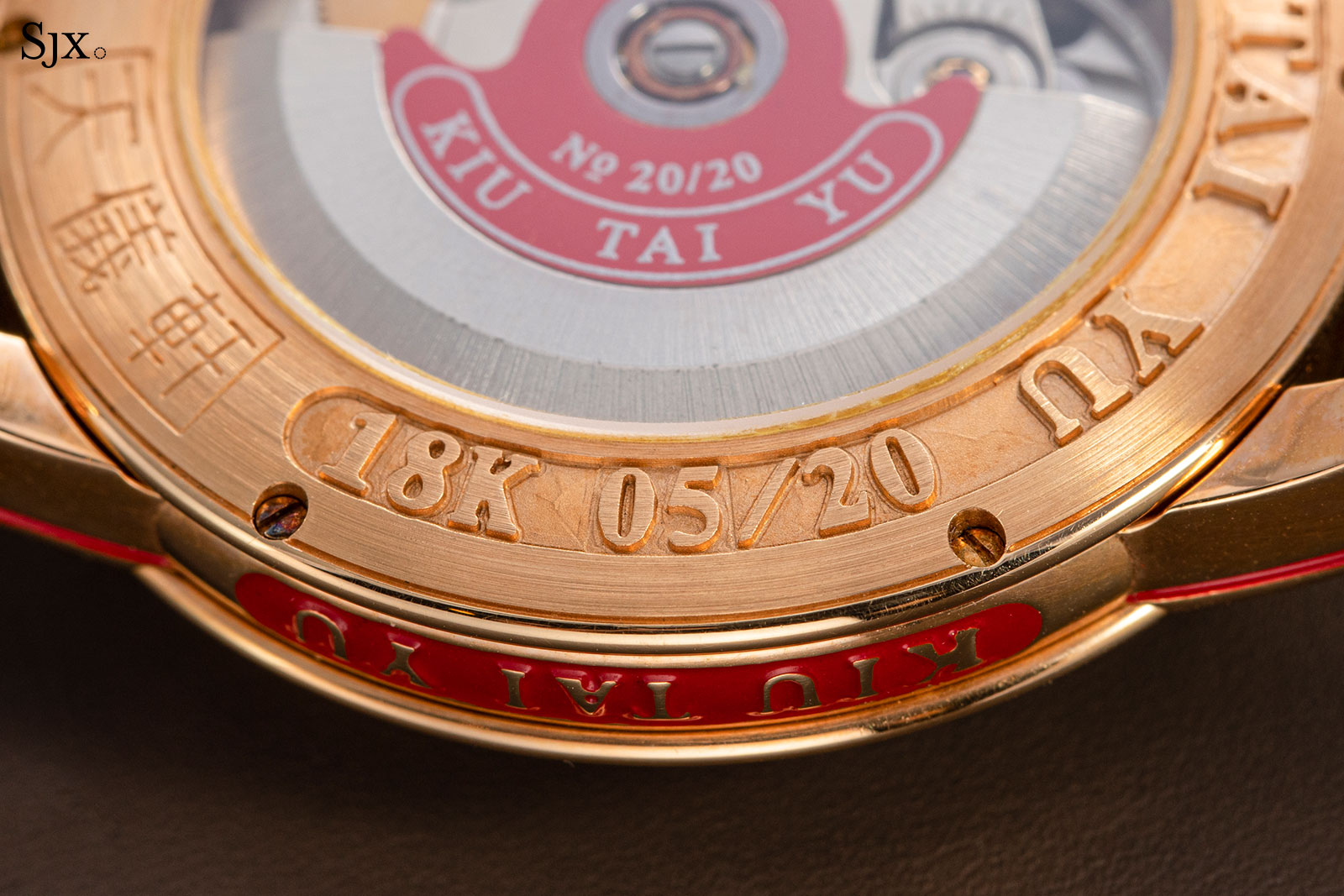 The back also reveals the movement, which isn’t much to look at – but it’s important to remember this was Kiu’s entry-level watch and it cost about as much as other ETA-powered watches at the time.

The movement is an ETA 2870 – produced in the 1980s and predecessor of the ETA 2824 – which means the movement was produced long before the watch was.

The only bit of window dressing is the rotor, which is in 18k white gold with its central portion coated in red lacquer. But because it’s in white gold, the rotor is hardly indistinguishable from the nickel-plated brass bridges. By today’s standards of design, Kiu’s watches are preposterously over designed. But judged by the standards of the time when Kiu first made his debut, especially given the fact that he was a pioneer Asian watchmaker, the look makes more sense. And with that understanding, it becomes more appealing.

Additionally, his watches are notable historical artefacts, being representative of an era and geography. All that considered, the Year of the Pig might be entry level, but it is an important watch.

For more about Kiu and his life, read his obituary.

Inventor of the Mystery Tourbillon.