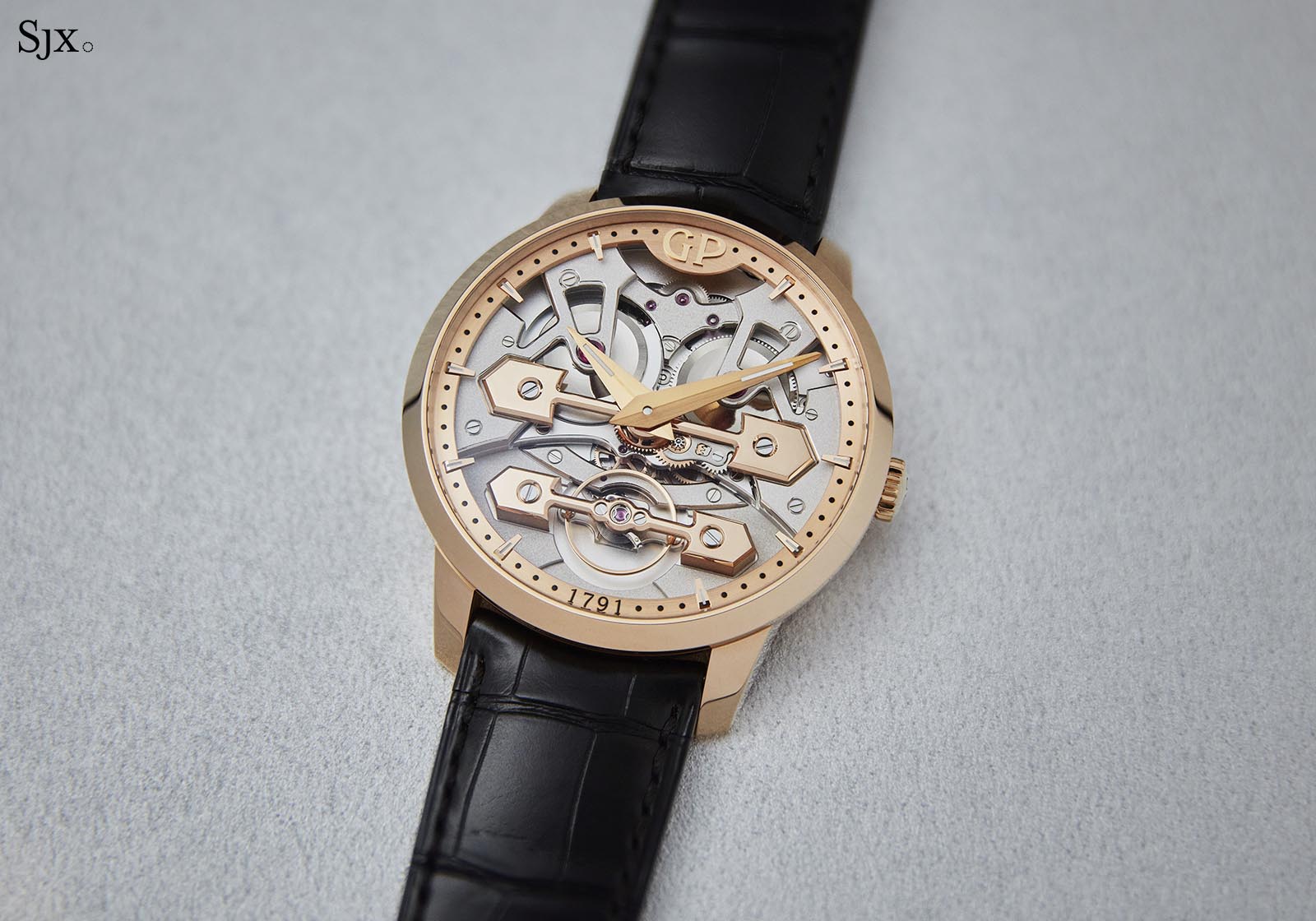 Some of the three-bridges magic has democratised with the Girard-Perregaux Classic Bridges 45 mm, a time-only watch that’s a more affordable take on the 19th century design.

French watchmaker Jean-Antoine Lépine revolutionised the construction of the watch movement around 1770 when he invented the Lépine calibre, which used bridges and cocks to secure the moving parts on the base plate, replacing the prevailing pillar construction where the parts were held between two full plates.

Almost a century later, Girard-Perregaux founder Constant Girard took Lépine’s idea a step further by rethinking the layout of the movement, with an eye towards not just mechanical function, but also beauty. 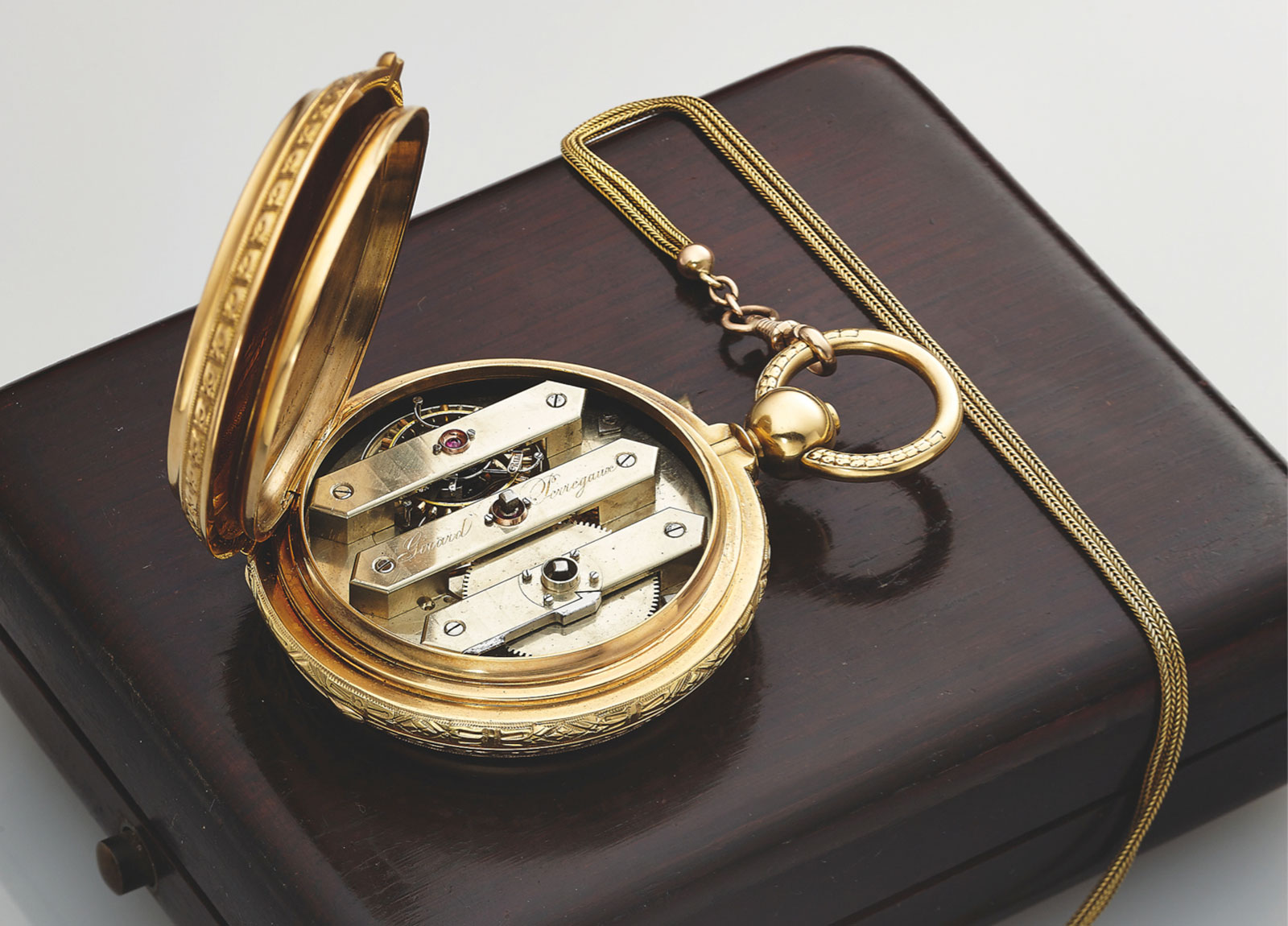 Starting in the mid 1850s, Girard began working on a caliber with its barrel, gear train, and regulator arranged vertically in a straight line. They were secured by identical, parallel bridges shaped like an elongated rhombus, creating an incredibly elegant equilibrium in the movement layout. Eventually the large, parallel bridges evolved into arrow-shaped bridges in solid gold.

Moreover, the phenomenal aesthetics of the movement were matched by its state-of-the-art precision; many examples of Girard’s movements were equipped with a spring-detent escapement. Girard produced about 20 such movements with tourbillon regulators, and a handful more without a tourbillon.

The three-bridges movement was an expression of the highest form of watchmaking in the 19th century, in terms of decoration, design and precision; most of the original pocket watches were extraordinary examples of horology. 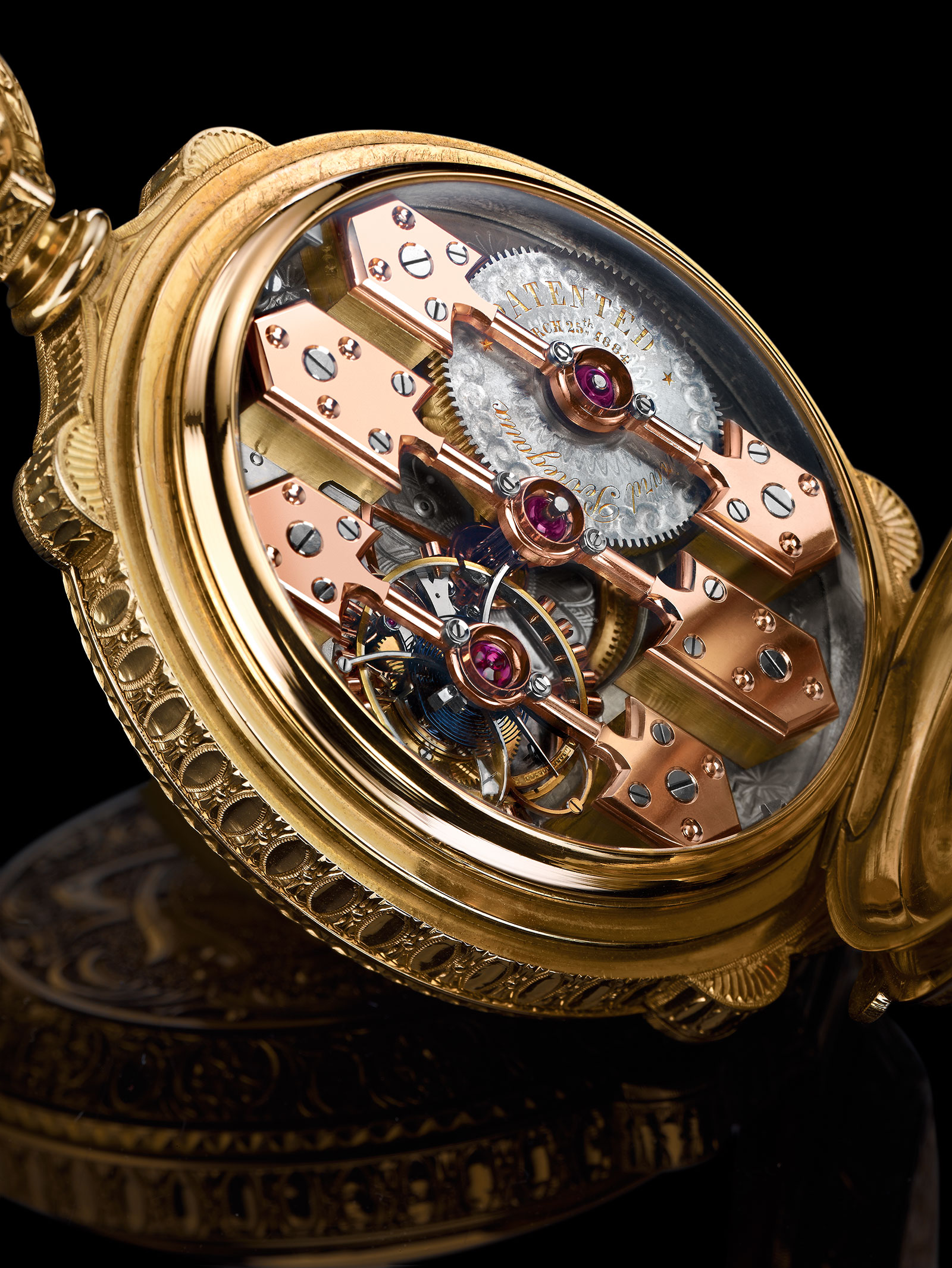 While keeping the same layout, the movement evolved into numerous iterations since then, often with additional complications or more contemporary bridges. The wristwatches were always fitted with a tourbillon regulator, until 2018 when brand unveiled the Classic Bridges (and a year before it had unveiled the similar but modern-looking Neo Bridges).

In style and finish Girard-Perregaux took a classical approach to the case of the Classic Bridges, which is entirely polished 18k pink gold. Though well made, it isn’t particularly outstanding in look or feel, but the conservative style works well for the design, especially since the focus is entirely on the movement.

The fact that the case is relatively thin, at a bit over 12 mm high, also helps by giving it a more elegant profile. 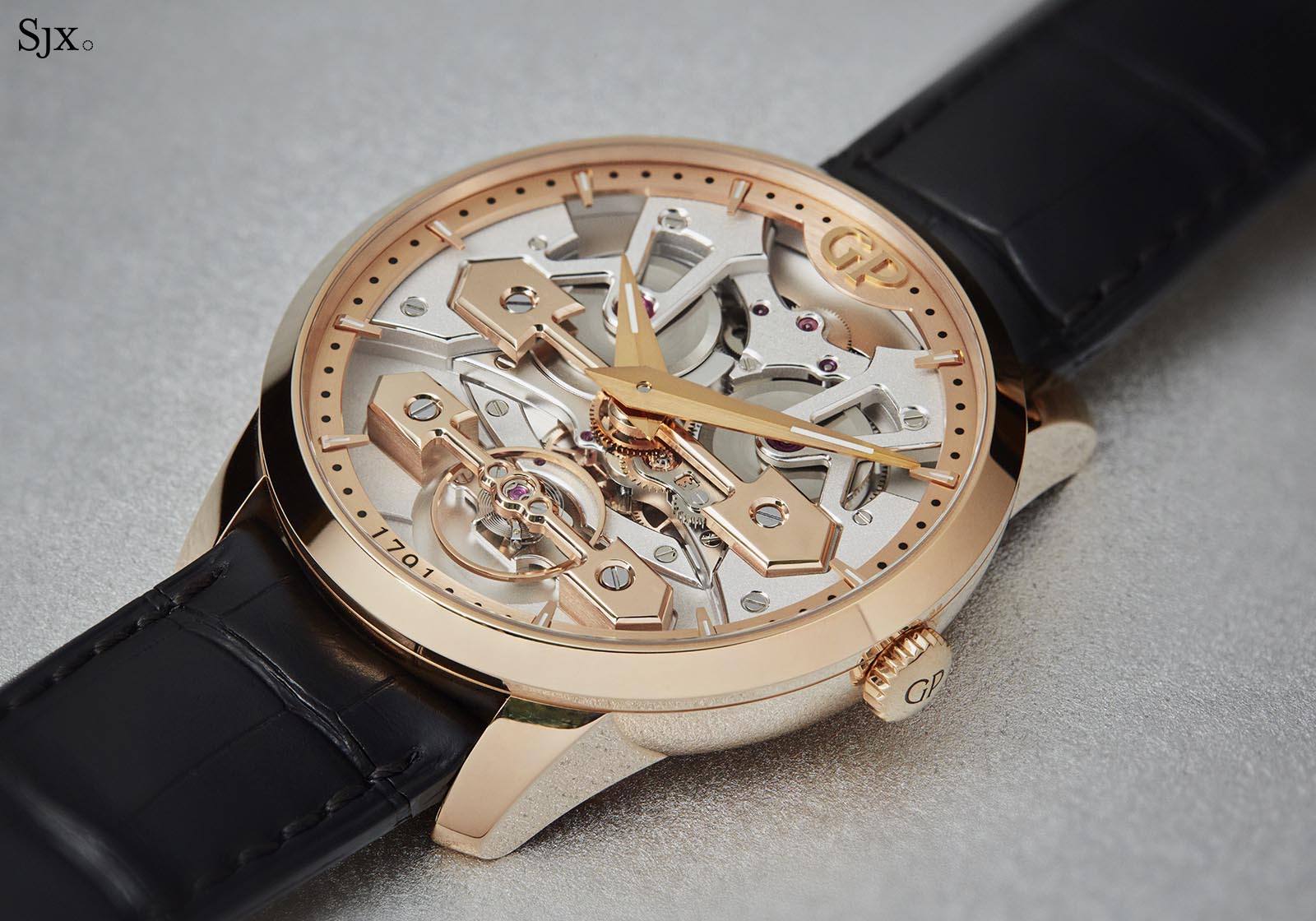 At 45 mm in diameter, the Classic Bridges sounds overly large, but it is the sort of watch that does better with a wider dial to showcase the movement. There is a more practical 40 mm version with the same movement, but the smaller watch looks slightly cluttered and indistinct.

Importantly, the cal. GP08600-0002 inside is specific to this version of the watch, with a larger, 37 mm diameter to fill the 45 mm case. Most of the movement has been reworked for the larger size, including the base plate and gold bridges. The movement is framed by a brushed, rose-gold chapter ring with applied hour markers

While the movement is neither a tourbillon nor a three-bridge movement strictly speaking (though it does have a third bridge of sorts incorporated into the back), the architecture is nonetheless beautiful and warmly reminiscent of the original tourbillon.

Its twin gold bridges create a striking contrast against the frosted base plate. The lower bridge holds the balance wheel while the central bridge carries the hands, canon pinion, and hour wheel. Right below is a frosted bridge that is responsible for the rest of the gear train and the keyless works; because the bridge is also frosted, it blends into the base plate.

Visible at the top of the dial is what appears to be twin barrels. But it is actually a clever design with the steel micro-rotor on the left and barrel on the right.

Though it does not look it at first glance as a result of the large case and dial, the free-sprung balance wheel is larger than average. Being a crucial part of the movement design, the diameter of the balance doubtlessly had to be maximised for visual effect, which dictates its lower frequency of 3 Hz instead of the more common 4 Hz (which would call for a smaller balance). While the three-bridges tourbillon has a near-perfect symmetry and streamlined mechanics on the front, the Classic Bridges is slightly more cluttered, with many of its moving parts visible. The visual elegance of the tourbillon movement is definitely absent.

That is a design choice, since they could have been covered up, but it is probably done to clearly distinguish the tourbillon from the affordable Classic Bridges. 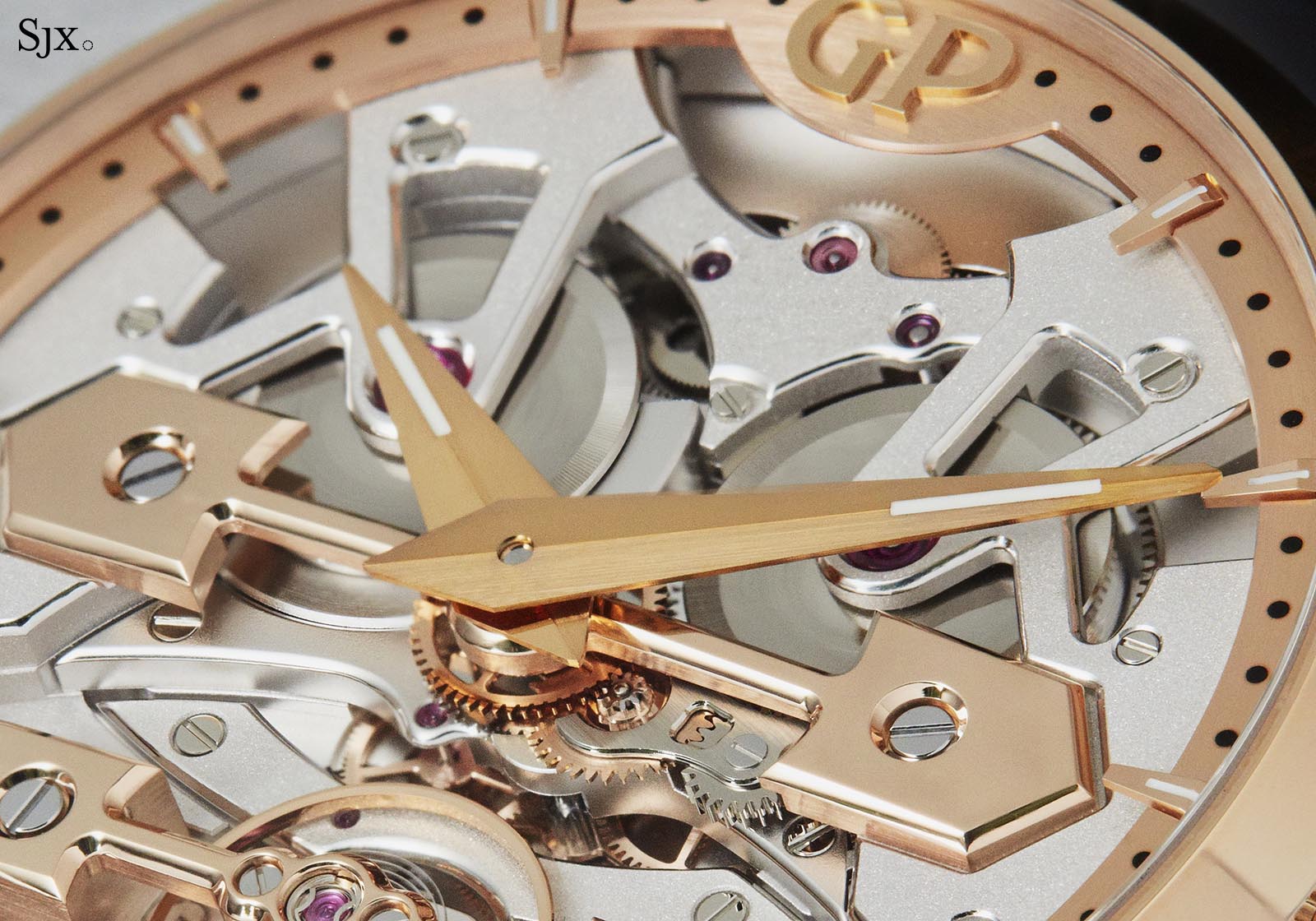 With almost all the moving parts visible on the front, the reverse is a full plate that’s almost bare, save for a one detail – the barrel ratchet wheel. It’s been skeletonised in a tri-lobe motif inspired by the trademark Girard-Perregaux tourbillon cage, and then especially well finished.

And the back also contains the third, not-quite-a-bridge of the movement, which holds one of the wheels for the automatic winding mechanism. Though the Classic Bridges is explicitly a simplified take on the Tourbillon with Three Bridges, the movement is still well decorated.

The twin gold bridges have mirror polished tops, bevelled edges, and brushed flanks, while all of the countersinks on the front are prominent and polished. Ditto for the base plate, which has bevelled edges everywhere. Even the steel bridge for the keyless works has polished bevels.

While every visible component is finished, the finishing is a mix of machine and hand finishing, so it lacks the artisanal flourishes of the three-bridges tourbillon – a fact rather than criticism, given the price of the Classic Bridges. Amongst other things, it would have made a tremendous difference to the look and feel of the watch if the gold bridges have rounded, instead of flat, arms. On the back, the finishing is unsurprisingly less elaborate. The plate is covered with Geneva stripes, but the countersinks are machined.

That being said, the back does boast one impressive bit of decoration: the open-worked ratchet wheel is gorgeously finished with polished, bevelled along the sharp inward and outward corners. The ratchet wheel modelled on the classic Girard-Perregaux tourbillon cage

Though open-dial watches are hardly novel, the Girard-Perregaux Classic Bridges has striking dial-side architecture that has two important qualities that elevate it above similar-looking timepieces: attractive decoration and strong historical foundations.

Despite being obviously simplified, the Classic Bridges still manages to convey a little bit of the magic of the Tourbillon with Three Gold Bridges. The bit of magic does costs 38,100 Swiss francs – a considerable sum but a fraction of what the original tourbillon costs, which is fair considering what was and was not applied in terms of decoration.

The Classic Bridges is fairly priced, but could become vastly more compelling with a little bit more refinement in the finishing, with rounded arms on the gold bridges for instance. As a result, it is just good enough, rather than great as the original tourbillon was.

That being said, the Classic Bridges does have strong competition in the price range, especially from well-established benchmarks like the Lange 1. As a result, it’s most compelling for someone who appreciates the historical importance of the three-bridge tourbillon.