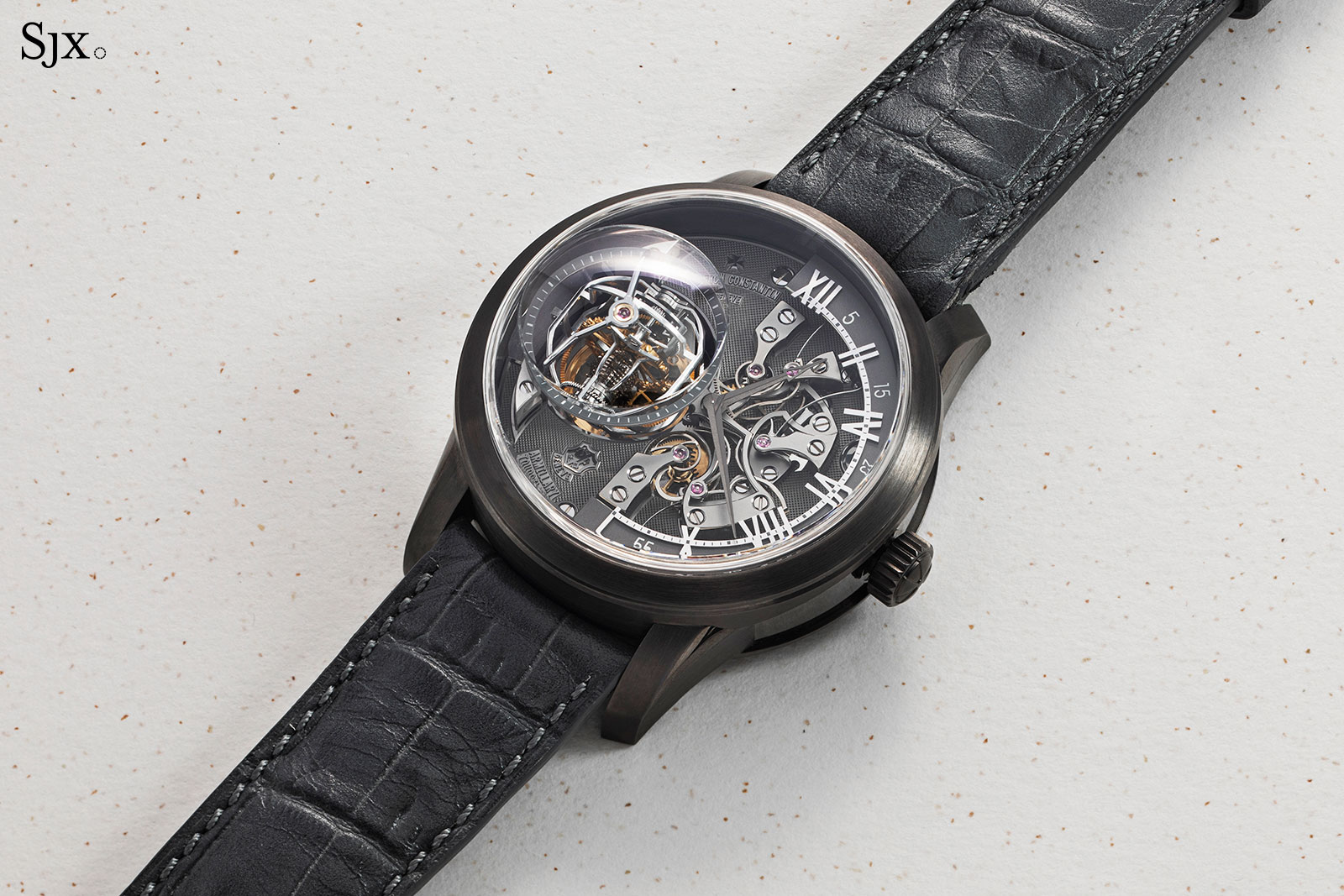 The eight years Vacheron Constantin spent on developing the most complicated watch ever – the Reference 57260 pocket watch – spawned not just the timepiece itself, but various complications incorporated within its movement. A handful of its complications have been translated into wristwatch form, including the multi-axis tourbillon, resulting in the Les Cabinotiers Armillary Tourbillon.

Originally launched in 2016 in a white gold case, and later iterated with cases in other precious metals, the Armillary Tourbillon recently made its debut with a black-coated titanium case, giving it a radically different look and feel from the earlier versions. 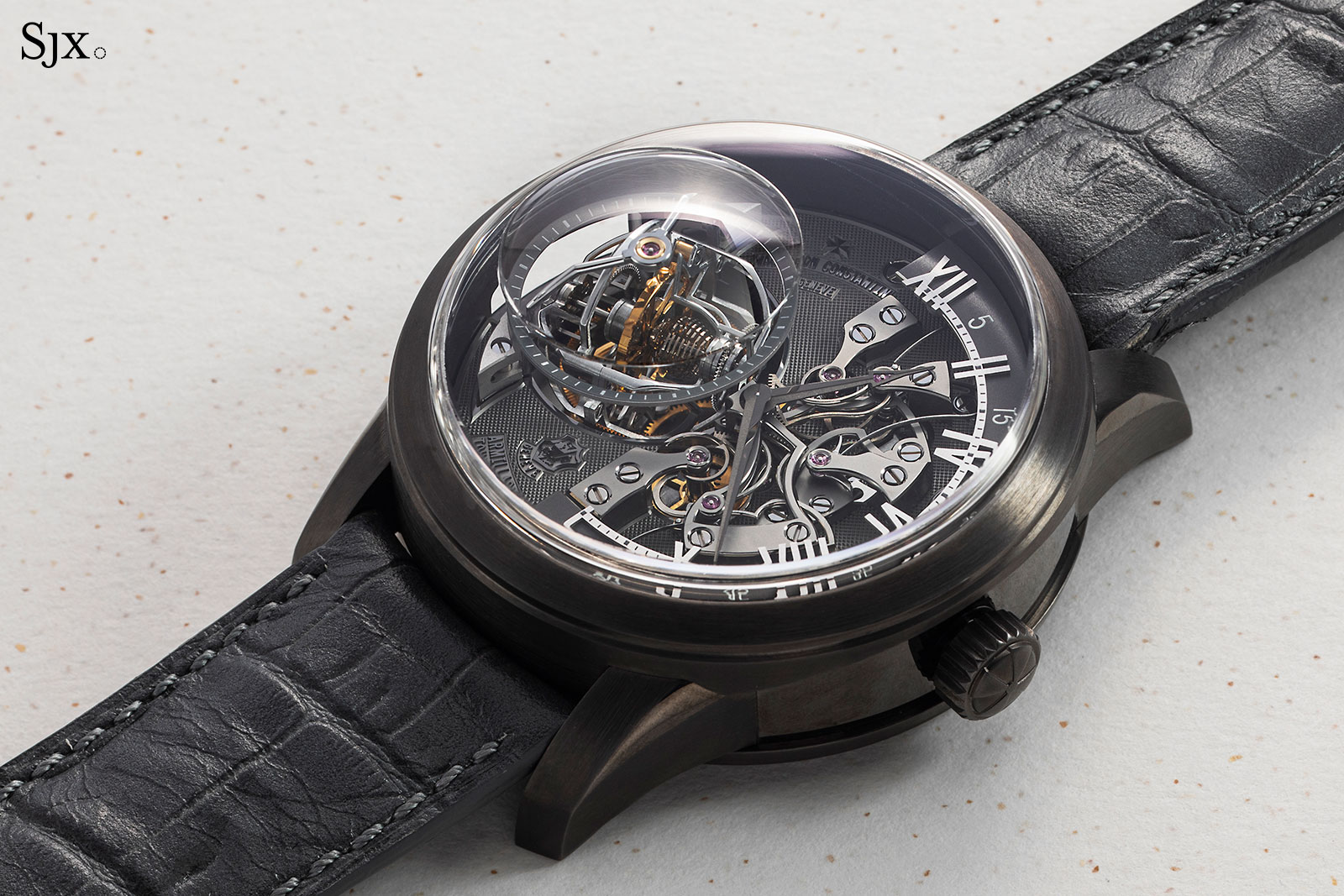 The watch is big, lightweight, and mechanical looking, setting it apart from the typical Vacheron Constantin. Though its colours are stealthy, the size of the case and intricacy of the dial mean it is hard to miss.

The case is huge – 45 mm in diameter and over 20mm high – and it looks the part on the wrist. Part of the thickness is due to the highly-domed crystal, a necessity because of the relatively thick movement and bi-axial tourbillon. In fact, the tourbillon sits so high that a bubble is integrated into the already-high crystal to accommodate the cage. 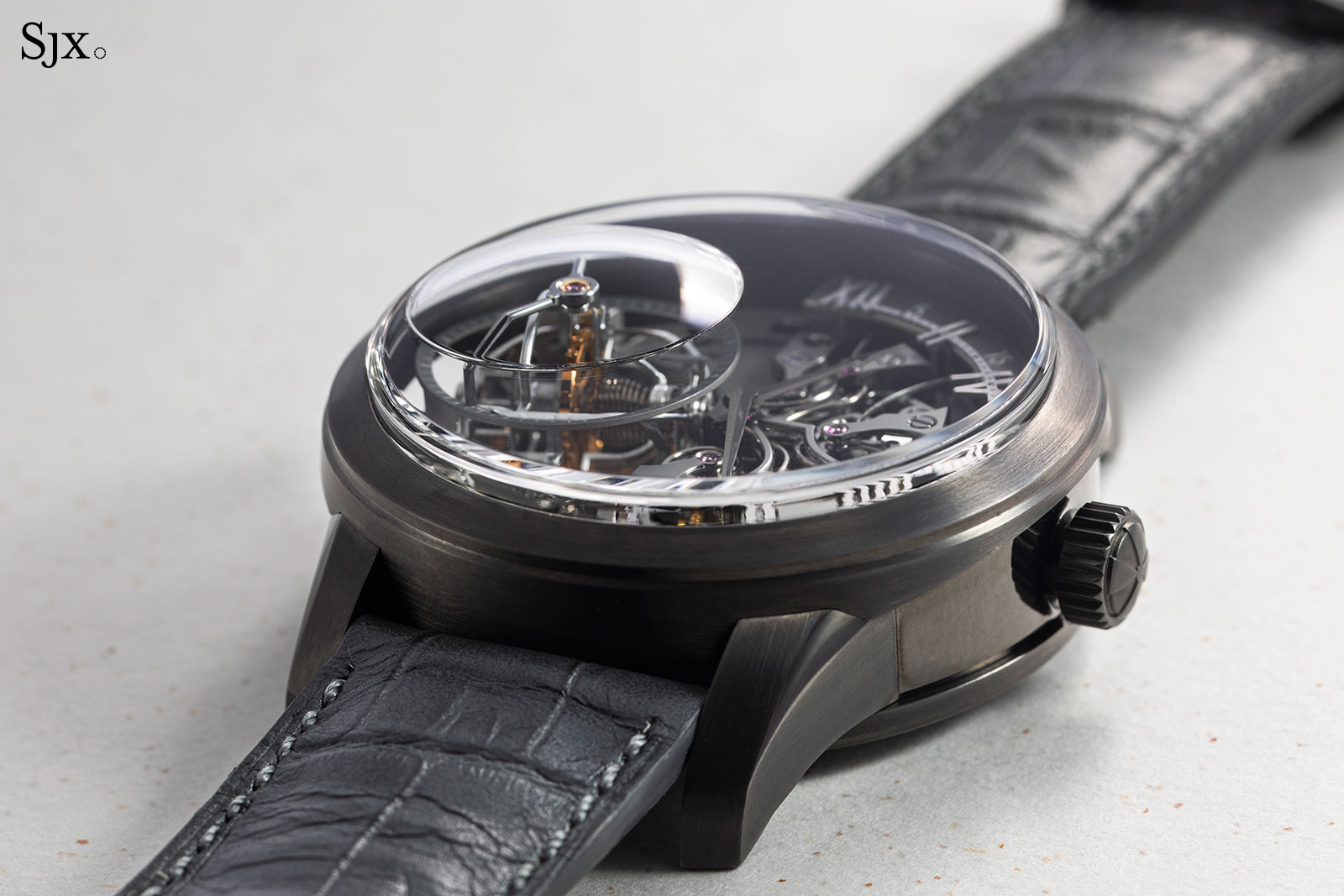 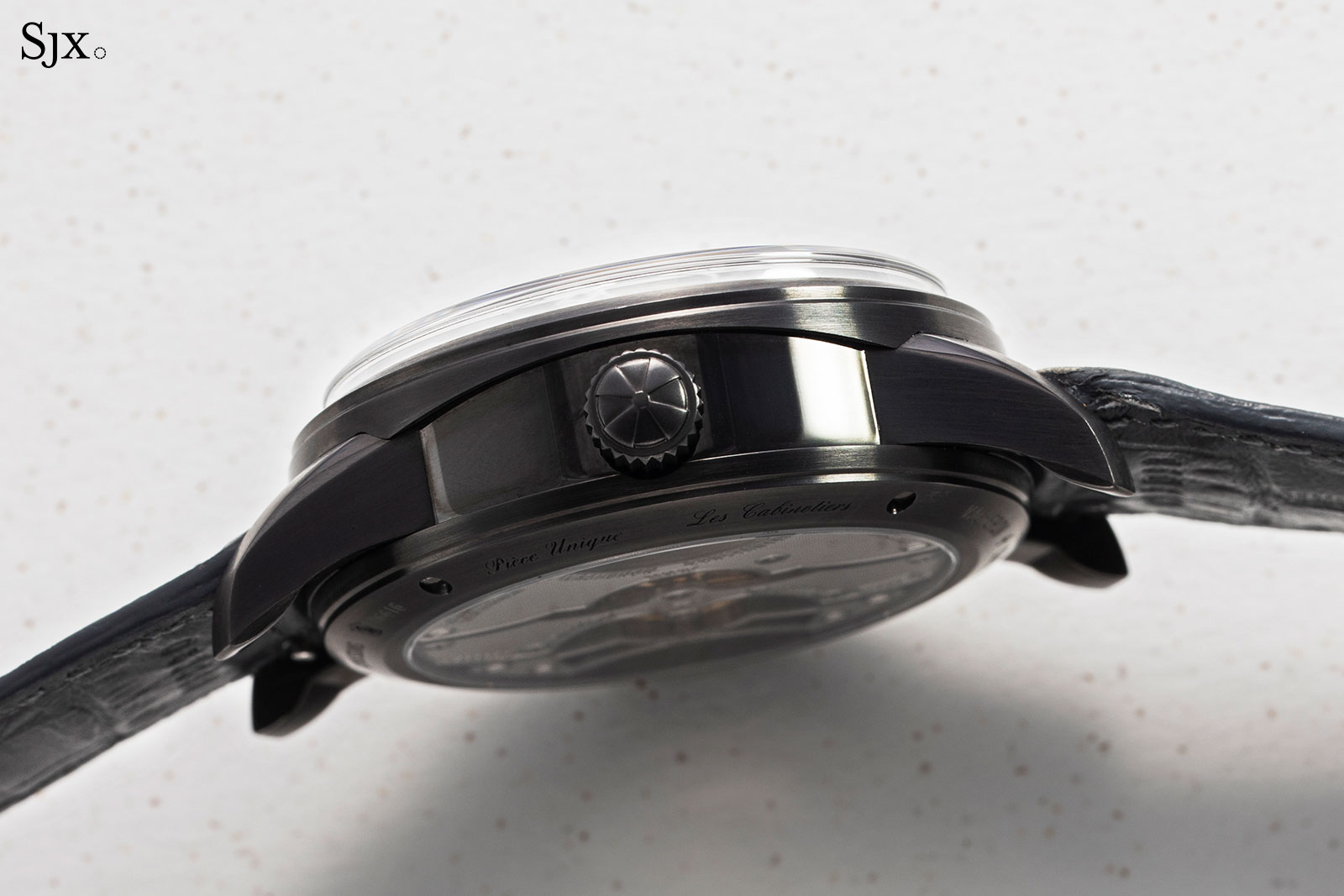 The pointed tips of the lugs are inspired by the Maltese cross, which is also the logo of Vacheron Constantin But this particular version of the Armillary Tourbillon is satisfyingly light because of the case material. As a result it wears relatively well for a watch so large; the feel on the wrist is similar to other big, complicated watches in titanium, like a Greubel Forsey or Jaeger-LeCoultre Gyrotourbillon.

The black-coated titanium case is also novel for a high-end complication today; the all-black-grand-comp was fashionable in the early 2000s, often paired with red accents on the dial, but it is less common today. 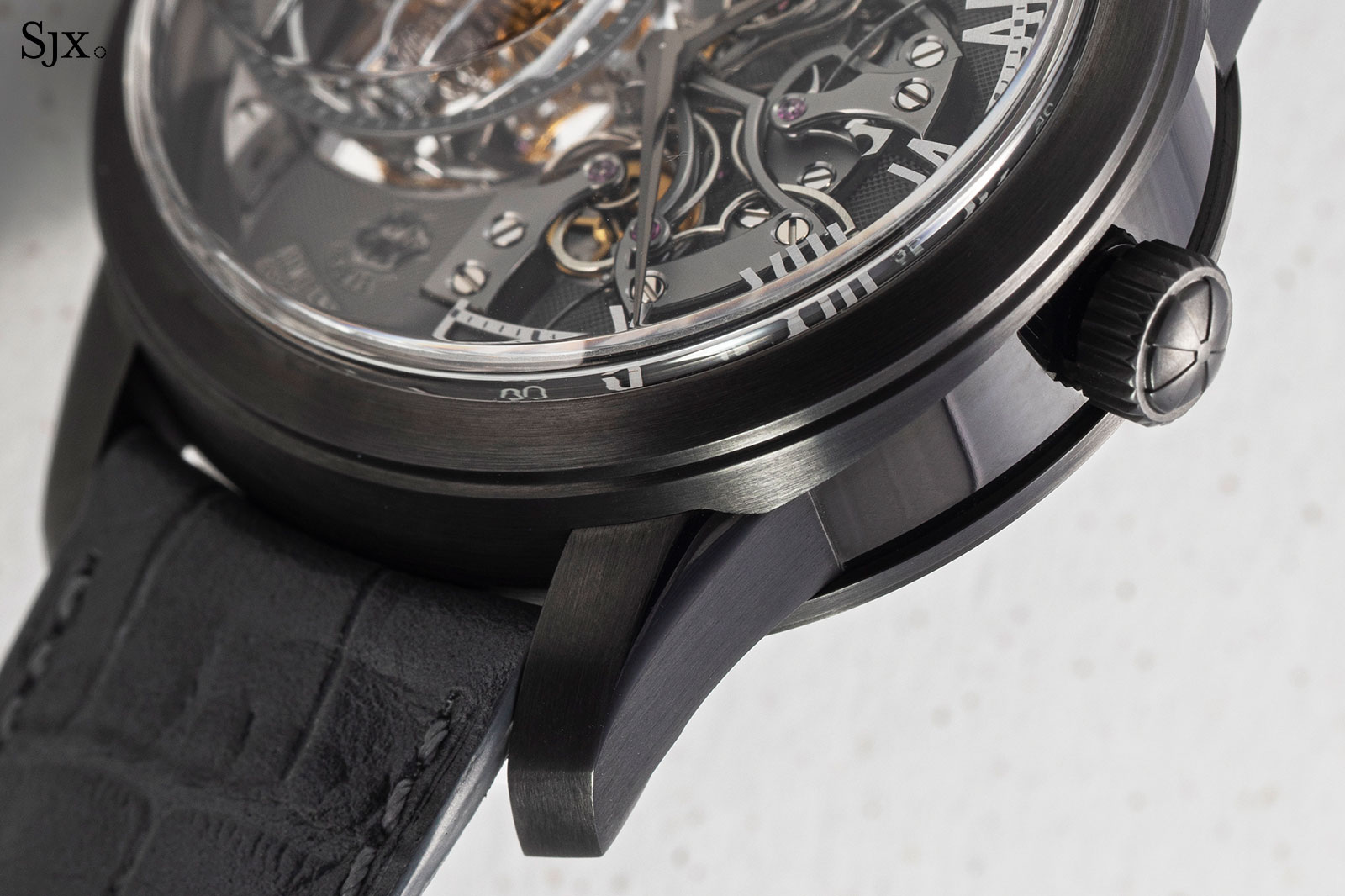 Admittedly, the look is pretty polarising – you either like it or you don’t. At first glance, I liked the look and feel, though I concede the novelty could, and would, probably wear off after some time. The paradoxical combination of black titanium and a haute horlogerie movement generally does not have as much aesthetic longevity as the more traditional common gold or platinum case.

But I can imagine for a specific type of collector, the light, complex, and expensive holds a lot of appeal, especially as an everyday watch.

The watch gets its name from the spherical tourbillon that resembles an armillary sphere or astrolabe, a spherical model of celestial bodies occasionally incorporated into astronomical clocks in the past. And on that topic, Vacheron Constantin actually built a movement, the Calibre 3600, that modelled the functions of an armillary sphere and made its debut in the Celestia in 2017.

The reason the tourbillon is spherical is because it is a double-axis tourbillon made up of twin, three-dimensional cages, containing a spherical hairspring, making for an impressive mechanical display on the dial. 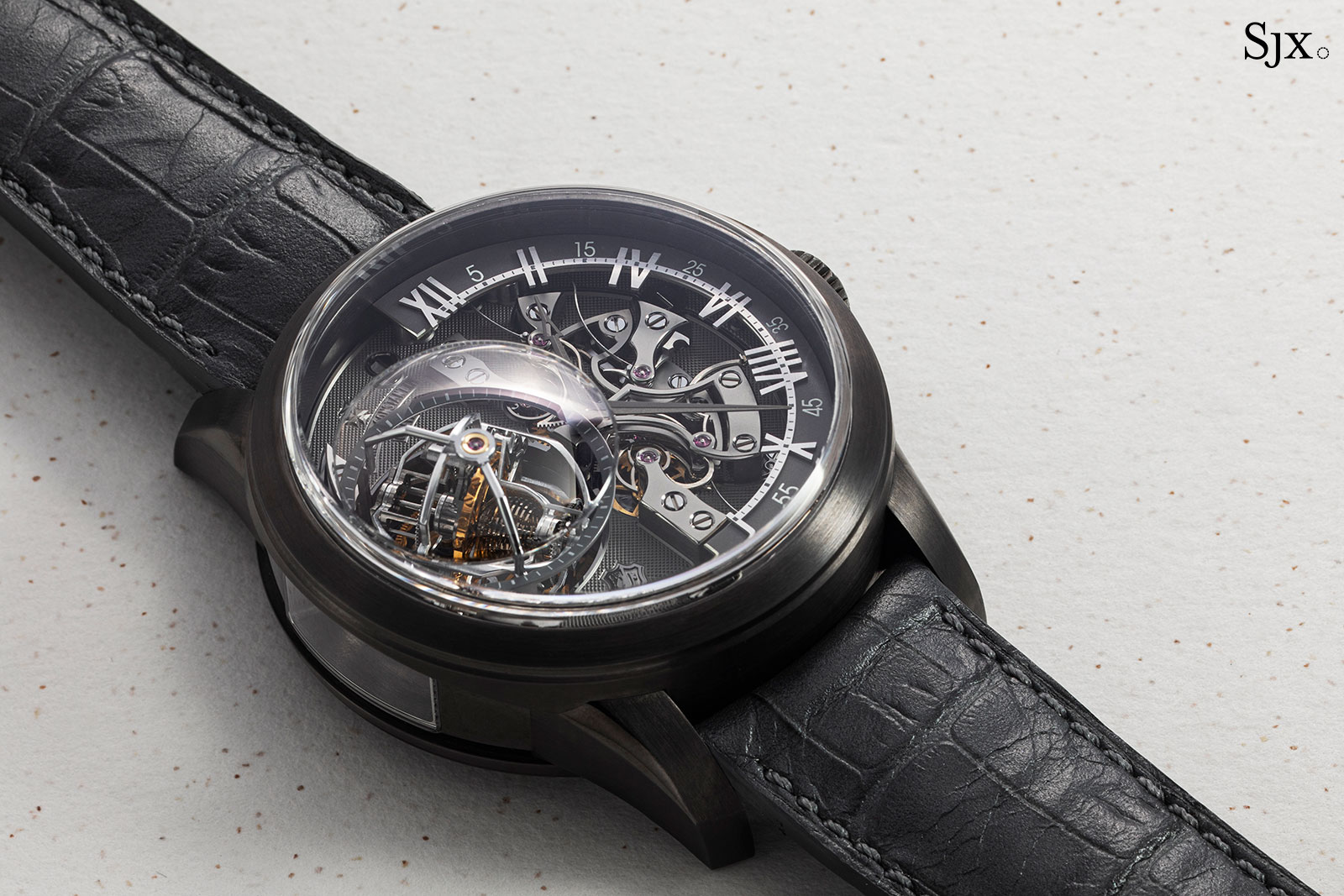 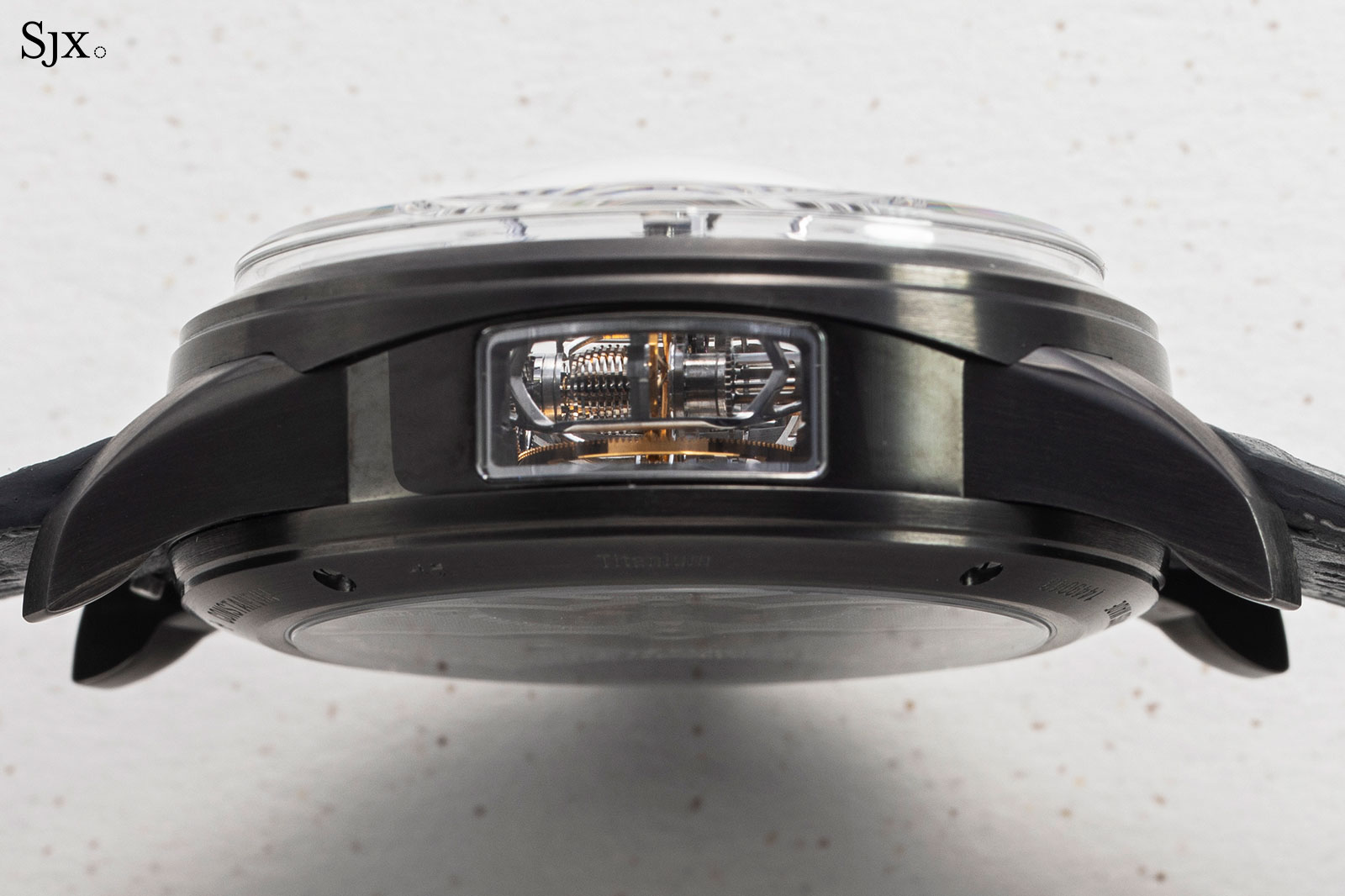 It’s worth noting, however, that the multi-axis tourbillon developed for the Reference 57260 had an extra dimension of complexity – that was a triple-axis armillary tourbillon. In fact, the triple-axis tourbillon was later miniaturised and then installed in a few (perhaps three) unique wristwatches.

The triple-axis tourbillon, in both the Reference 57260 and later wristwatches, was notably interesting because each of the cages were shaped like separate halves of a Maltese cross, and came together to form the cross for a split second as the tourbillon made its rounds. A clock topped with an armillary planetarium made by French clockmaker Antide Janvier, dating from 1774. Photo – Sotheby’s The triple-axis armillary tourbillon in the Reference 57260

The double-axis armillary tourbillon here is similar, but with less one axis. In fact, both its inner and outer tourbillon cages are intricately shaped, forming the arms of a Maltese cross.

Unlike most multi-axis tourbillons that combine different cage speeds, the armillary tourbillon has both cages rotating at an identical rate of 60-seconds per revolution, but on different axes: the axis of the outer cage is perpendicular to the dial, while that of the inner cage is parallel.

But despite the two cages rotating at the same speed, the visual performance is as impressive as that of a tourbillon with cages going at different speeds; it’s an engaging, miniature spectacle. 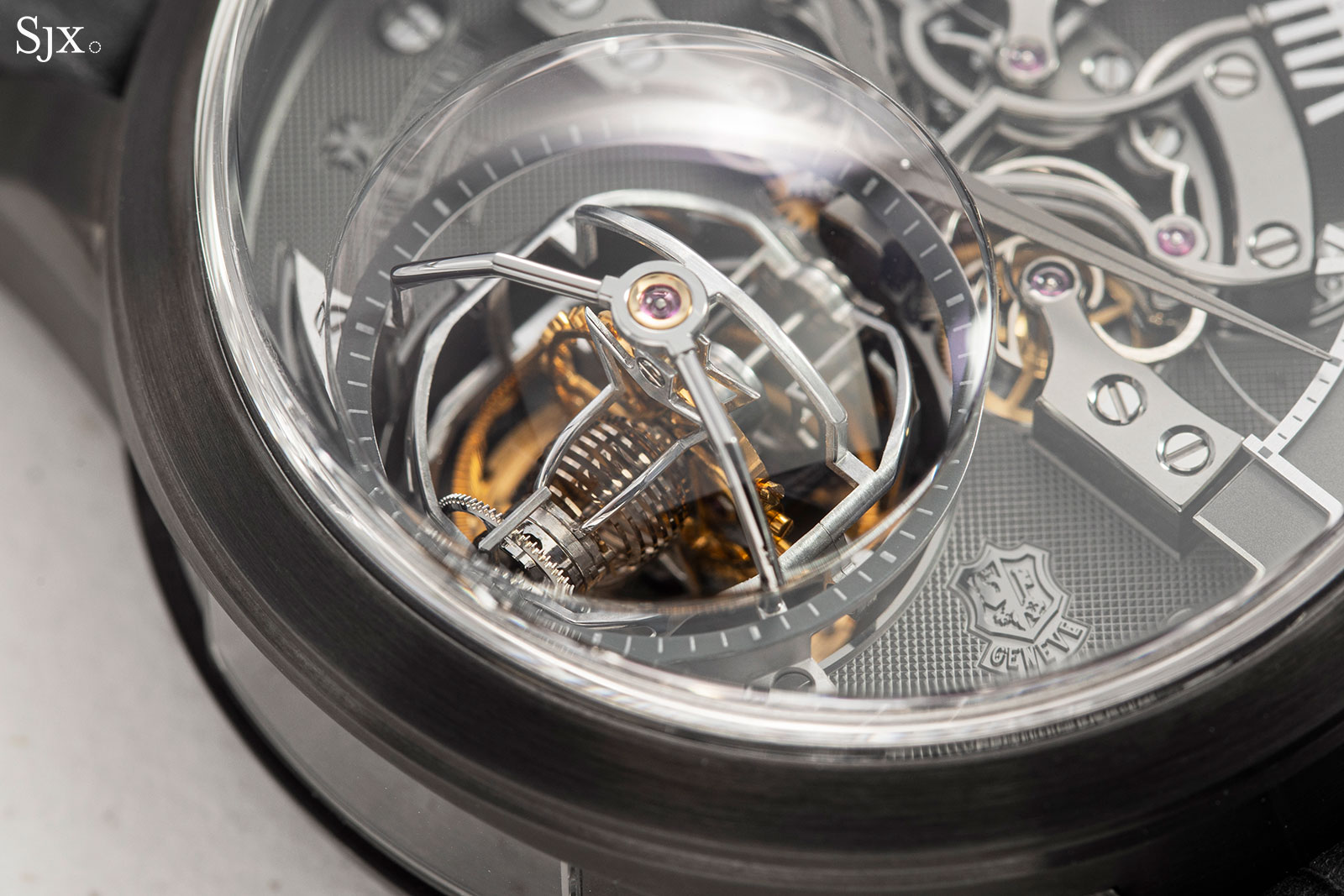 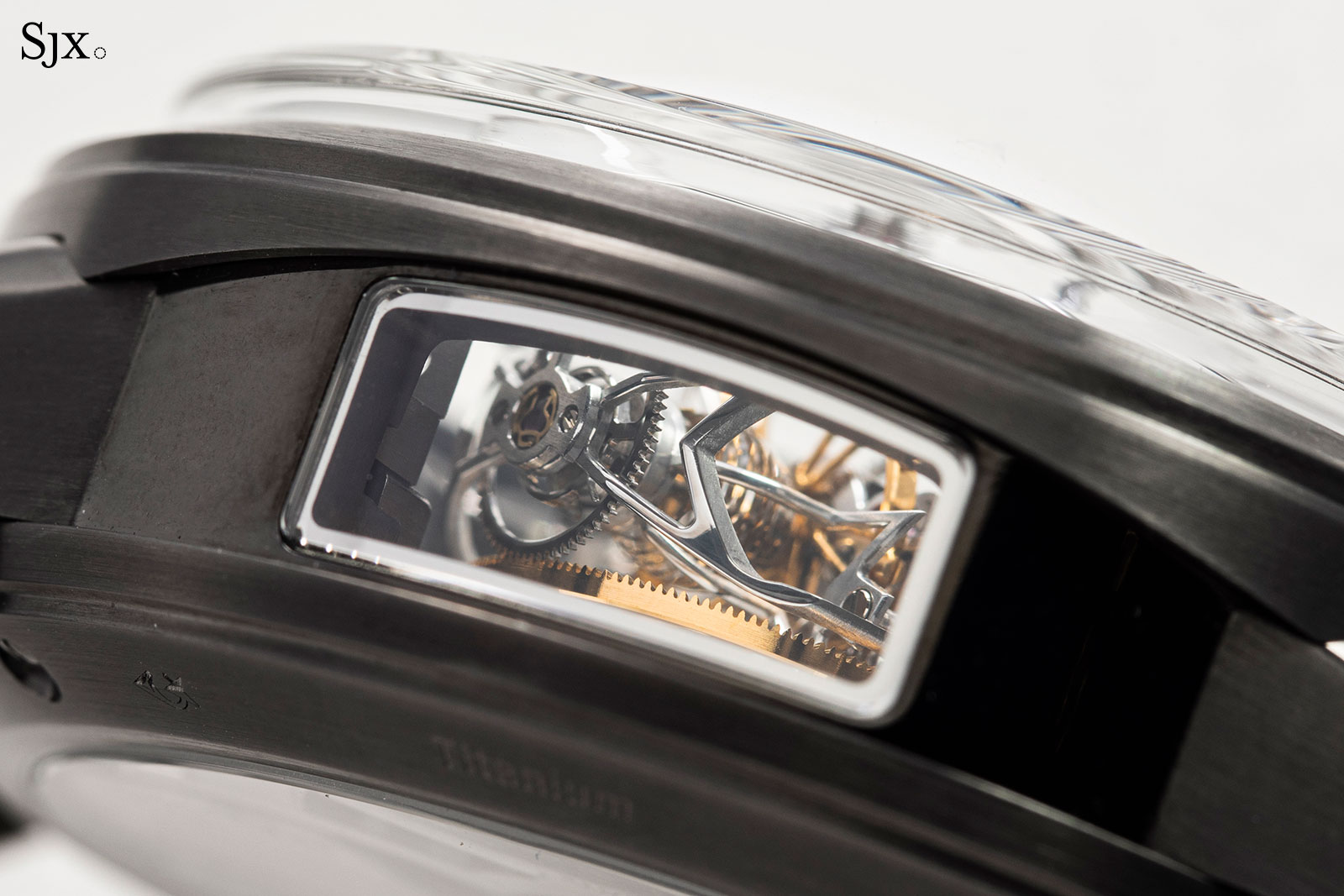 The Maltese cross-shaped outer cage as seen from the side

A key factor of the visuals is the spherical hairspring, which looks cool but is also rooted in traditional chronometry. A cylindrical, and by extension spherical, hairspring “breathes” in an almost perfectly concentric manner, as opposed to the common flat hairspring. For that reason, cylindrical hairsprings were used in marine chronometers.

In a high-end modern watch, the cylindrical hairspring is probably an affectation, because any benefit is probably too negligible to measure, but it remains an fine detail.

The tourbillon is interesting on a deeper level as well, because it is combined with an almost-experimental, patented escapement made up of a silicon escape wheel as well as a silicon lever with diamond pallet stones.

Silicon escapement parts are rare in movements made by brands within Richemont, which also owns A. Lange & Söhne and Cartier, primarily due to the fact that the intellectual property behind type of silicon used in watch movements is owned by consortium that does not include Richemont (and is instead made up of Rolex, Patek Philippe, Swatch Group, and Ulysse Nardin).

Vacheron Constantin hasn’t revealed much about what exactly makes the silicon escapement unique, but if it works well we will no doubt hear more about it in the future.

On the dial, the tourbillon is balanced by the intricate twin-retrograde time display, giving the dial a fair sense of balance, which is rare in such an exotic watch.

Both the hours and minutes are indicated on the same 180-degree retrograde scale that’s graduated for both. Because of the size of the scale – it’s essentially half the wide and open dial – legibility is decent. The complexity of the retrograde mechanism below takes away from easy readability, but that is paradoxically one of the strengths of the watch. The retrograde display is both functional and aesthetic, with its mechanics revealed through the open dial. Because a retrograde is driven by wheels, springs, and snail cams, the open-worked mechanism gives the dial depth and visual interest.

At the same time, the intricacy of the mechanism balances the visual weight of the tourbillon on the other half of the dial. And because both hands are retrograde, the mechanism is doubly complex. It contains two sets of levers, springs and snail cams, each held by two finger bridges – and everything is finished to a high level.

The steel parts have frosted surfaces and polished, bevelled edges, along with chamfered and bevelled screw heads sitting in polished countersinks. Naturally, the tourbillon is decorated to the same degree, which is quite a feat given the size and three-dimensionality of the cages.

The inner cage is secured by a steel bridge is especially beautiful in form and finish. Extending upwards and over the tourbillon, the slim bridge has with two corners on each of its arms, but still manages to be rounded and black polished. Below all of the moving bits on the front is the base plate of the movement that’s been engine turned, the old-fashioned way with a rose engine, covering it in a fine hobnail guilloche, giving it a slightly industrial look that contrasts well with the intricacy of the retrograde and tourbillon components.

The hobnail engine turning continues on the back of the cal. 1990, which has a symmetrical layout and angular bridges characteristic of Vacheron Constantin’s tourbillon movements ever since the round cal. 1760 launched in 1992, the result of a collaboration with movement specialist Haute de Gamme (HDG). And eight years later, that was followed by the tonneau-shaped cal. 1790, after Vacheron Constantin took over HDG in 1998.

Seen from that perspective, the bi-axial tourbillon cal. 1990 is the ultimate evolution of the Vacheron Constantin tourbillon (except for its cousin equipped with a triple-axis tourbillon that’ll probably never be produced again). That’s a title reflected in the numbers: the cal. 1990 is made up of 299 parts, almost double that of a conventional tourbillon movement. As it is on the front, the back of the watch has an orderly, even layout. A single large barrel is visible next to the crown, with the going train progressing linearly to the tourbillon.

Although the large bridges have been elaborately decorated, the look of the movement is muted because it is almost entirely finished in a black-nickel plating. As a result, the gold-plated moving parts, like the wheel and barrel cover, jump out. At first glance, the gilded bits are the only thing you see. But a more careful look reveals the finishing on the bridges as excellent and somewhat unorthodox.

To start with, the depth of everything on the bridges is inverted from what how they are usually done. All of the lettering is machined in relief, instead of being engraved, while the edges of the bridges are raised, forming little borders around the hobnail guilloche. The company logo, location and Poincon de Geneve emblem are all in relief As a result, the bridges do not have the traditional bevelled edges, but the other elements of fine finishing are properly executed.

So the movement boasts polished countersinks for the jewels and screws, chamfered slots and edges on screw heads, as well as bevelled spokes and inner rims on the wheels – in other words, the full works. The Armillary Tourbillon is technically impressive, but unusual in style – a good thing in small doses. This version in black-coated titanium is quite brilliant as a one-off; the novelty of the all-black look would diminish rapidly with more examples being made.

It does cost a lot, but watches like this almost always do. And it is important to note that for the price, the finishing is considerably better than say, a Jaeger-LeCoultre Gyrotourbillon, which costs a bit less.

And the final point: knowing that the triple-axis armillary tourbillon exists, one must ask, why not?