Originally a no-nonsense dive watch made for the frogmen of the Italian navy during the Second World War, Panerai has been moving towards more civilian-friendly sports watches. The evolution is best illustrated by the Luminor Due, which is smaller and thinner, and as far removed from a traditional Panerai as possible while still retaining the signature crown locking mechanism.

At the same time, Panerai has also rolled out watches that are oversized like the military originals, but with an increasingly variety of dial colours, like the quartet with blue dials in 2016. Such metallic blue dials are currently fashionable, so it’s no surprise Panerai has continued with the same colour.

Compared with the earlier PAM 688, size is not the only difference with the new Luminor PAM 1033.

A small but significant design tweak is the colour of the hands: instead of gold hands as as before, the hands now match the case. Though the change is seemingly minor, it gives the watch a different look, one that’s more contemporary, because the hands, though small, are the focal point on the dial.

But the beige Super-Luminova on the dial and hands is faux-vintage, which does not quite match the newness of the blue dial. 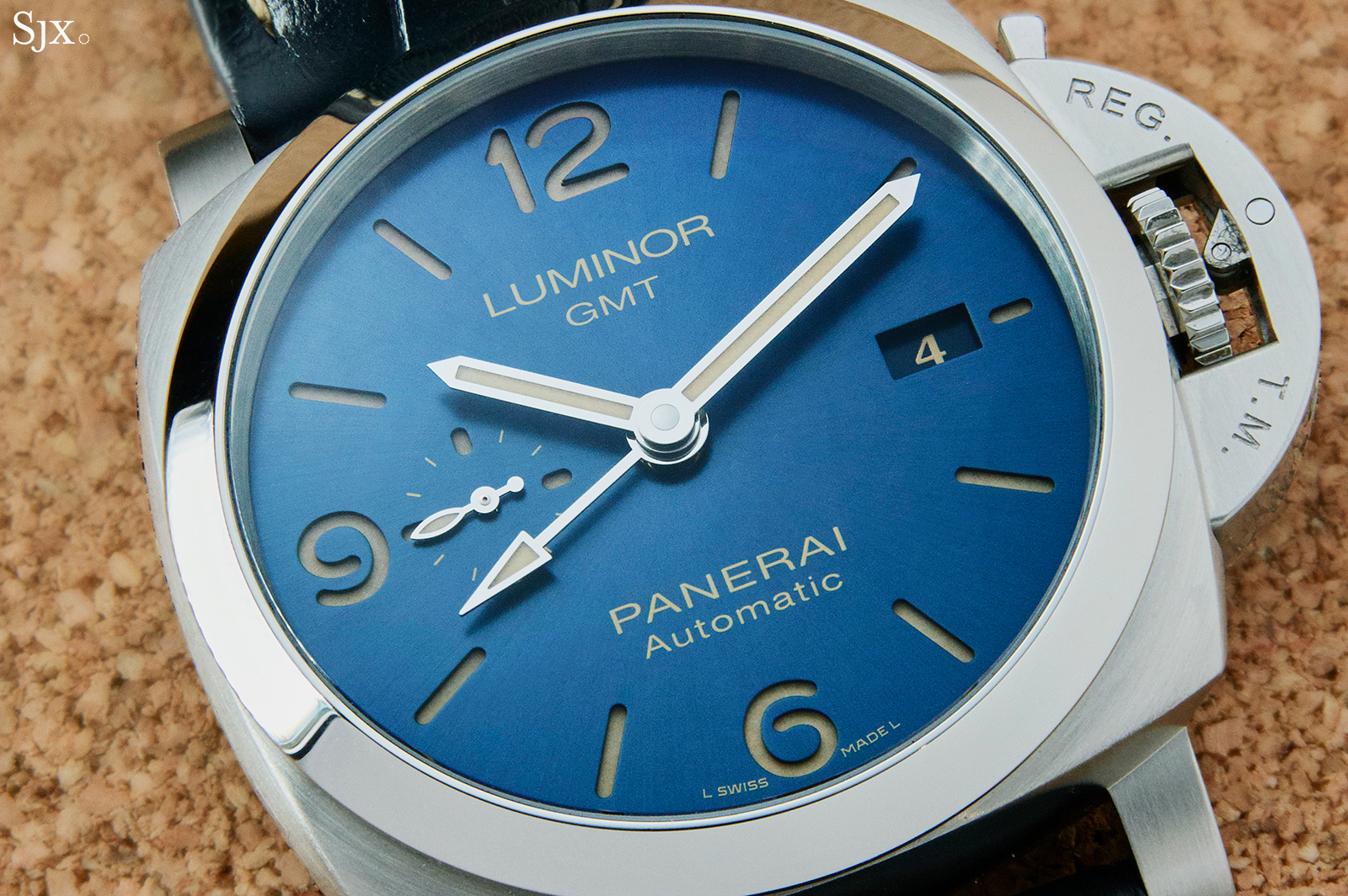 The dial is a “sandwich” construction, a signature feature of Panerai, with a lower dial plate printed with Super-Luminova numerals that show through the cutouts in the upper dial plate.

While the stock images of the watch show the dial as glossy, the shine of the metallic blue in real life is relative muted, though the colour catches the eye.

With the design being classic Panerai – numbers at the quarters and batons in between -the dial is legible and handsome. The size of the dial allows all its elements to be spaced out enough that it isn’t cluttered, even though there’s quite a lot going on. And contrast between the radially brushed upper dial and the ecru “lume” also enhances its readability.

A personal grievance, however, is the date sits away from the edge of the dial, a result of the smallish movement relative to the case, which cuts into the hour marker and leaves half of it on the right of the date window. The pronounced asymmetry of the date window is a mild blemish on an otherwise great dial.

Overall the case is classic Panerai in style and quality – cushioned-shaped, robust and nicely detailed.

The side profile of the case is surprisingly elegant for such a large watch. It’s a Luminor 1950 case, which reproduces the bowl-shaped profile of the vintage originals that had a surprising set of curves for a military watch. 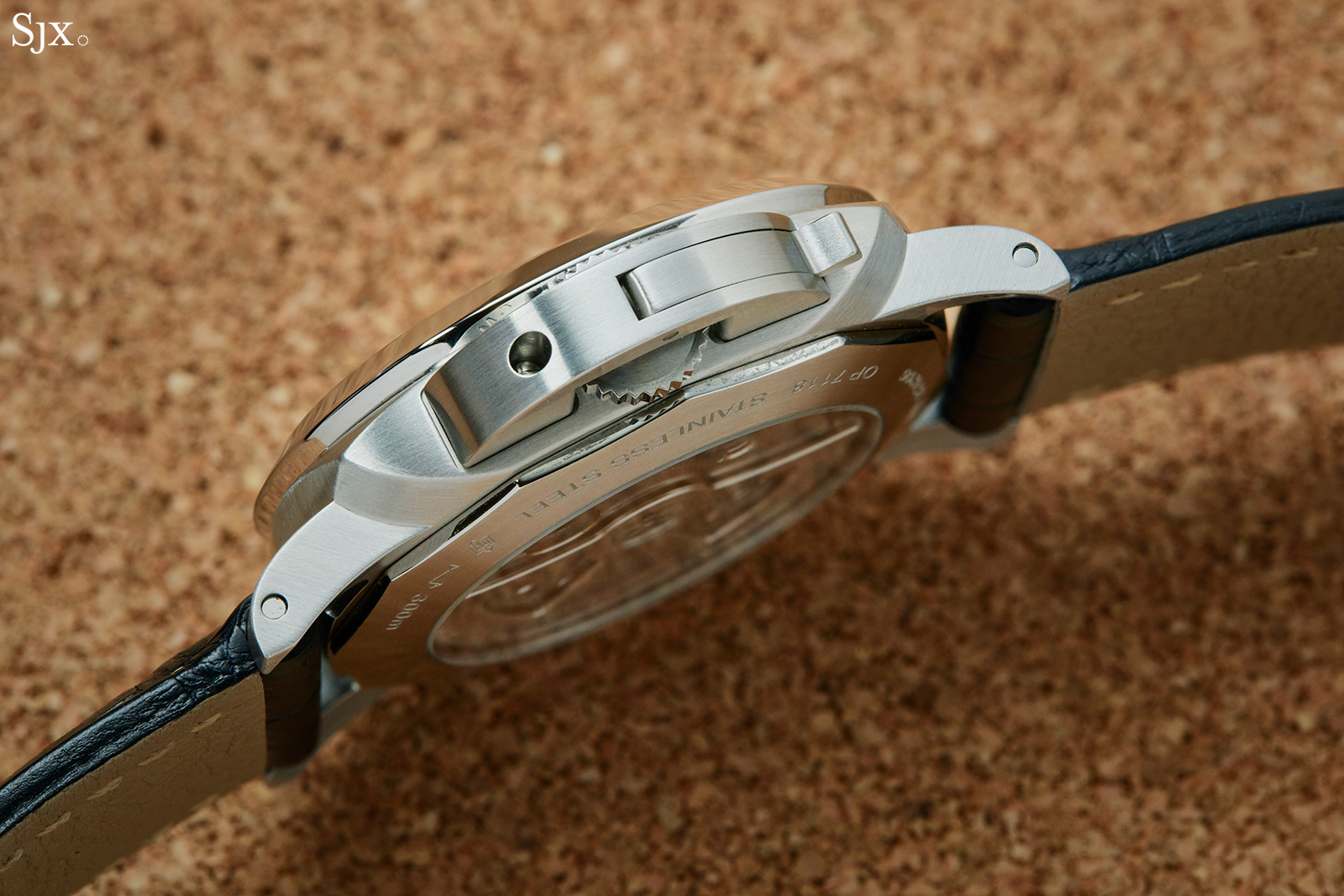 On the wrist, the PAM 1033 is a big watch with a polished bezel that’s equally big, making it inconveniently susceptible to scratches.

But this is the standard finish for most of the larger Luminor watches, probably because it’s a bit much to have such a large case entirely polished. And the combination is also loosely inspired by vintage Panerai watches, which in fact had entirely polished cases with only the crown guards having a matte finish.

Fortunately, the rest of the case is brushed. The corners of the pillow-shaped case are brushed concentrically, creating a pleasing contrast between the straight brush on the lugs and crown locking bridge.

Like all Luminor watches, the crown-locking bridge is engraved with the abbreviation for “registered trademark”, a detail found on some historical Panerai watches that’s now reproduced on most Luminor models.

Current Luminor owners may already know this, but for those who have yet to own a Panerai, while the crown-locking device is one of the iconic emblems of modern watchmaking, it is also a magnet for lint, from dust particles to hair that get trapped within the crevices. Those with OCD need to give it a daily once-over.

At 44mm in diameter and 16mm thick (a good part of it the 2.6mm thick crystal), the watch is surprisingly comfortable on my average-sized wrist. Because of the lightness of the steel case, the watch feels like the right balance of weight and size for the average gent.

Though short, the lugs have only a slight downward curve, leaving the watch to move ever so slightly up and down the wrist, in other words it doesn’t really sit snugly. 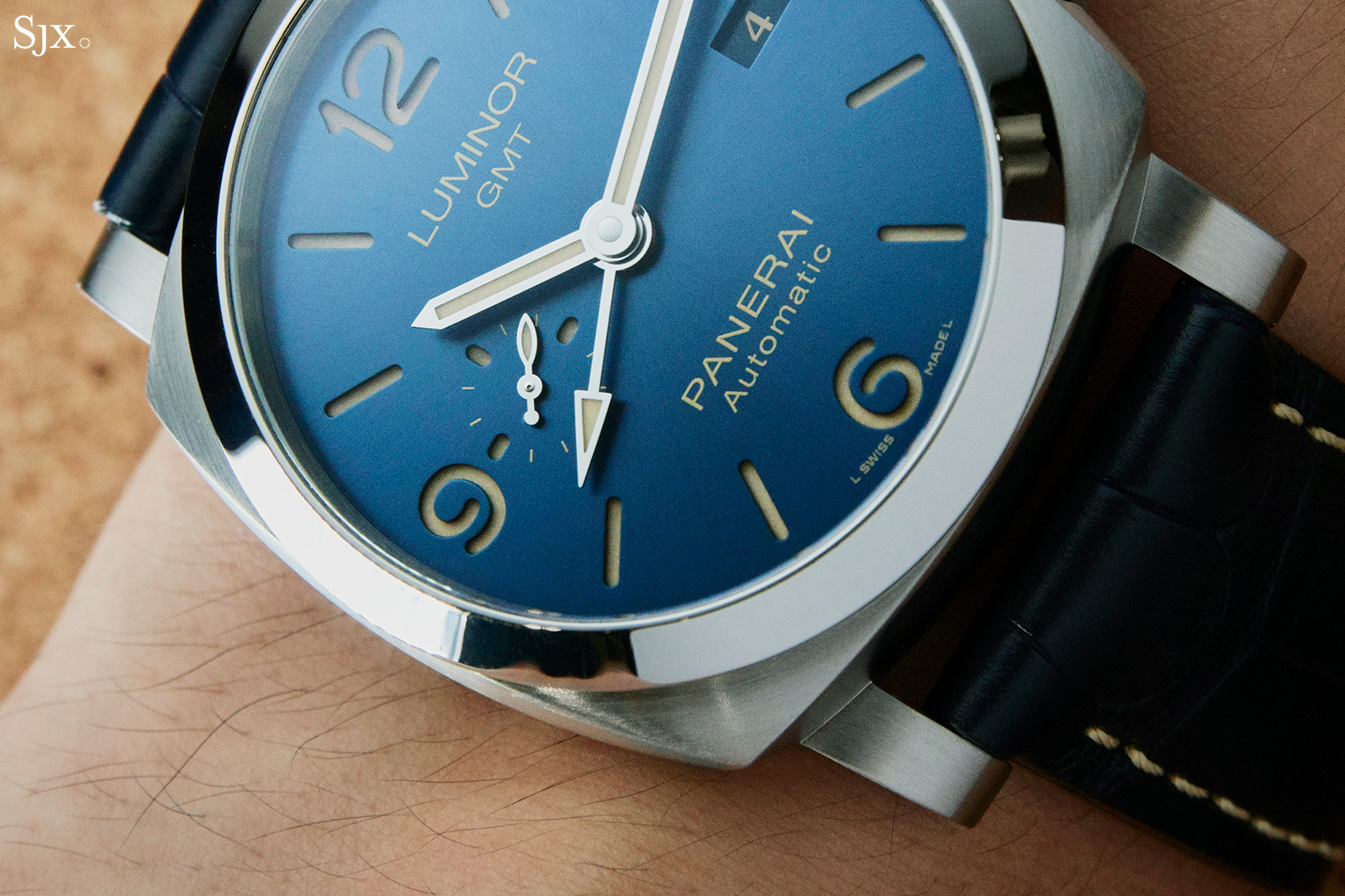 Function-wise the watch is easy to operate. It functions like a typical GMT watch, with the second time zone set via the crown in one hour steps; advancing the GMT hand also advances the date, and vice versa.

The three-day power reserve – now a baseline feature for all in-house Panerai movements – is yet another plus point for the watch as a good choice for everyday wear, since it’ll run right through the weekend even if not worn.

It is powered by the self-winding cal. P.9011, an in-house movement with practical features that is visible through the sapphire case back.

The movement is equipped with two spring barrels and also features an independently adjustable hour hand, which is found on all in-house movements but most useful on a GMT watch like this one. It means the time zone shown can be adjusted without affecting the time synchronisation. 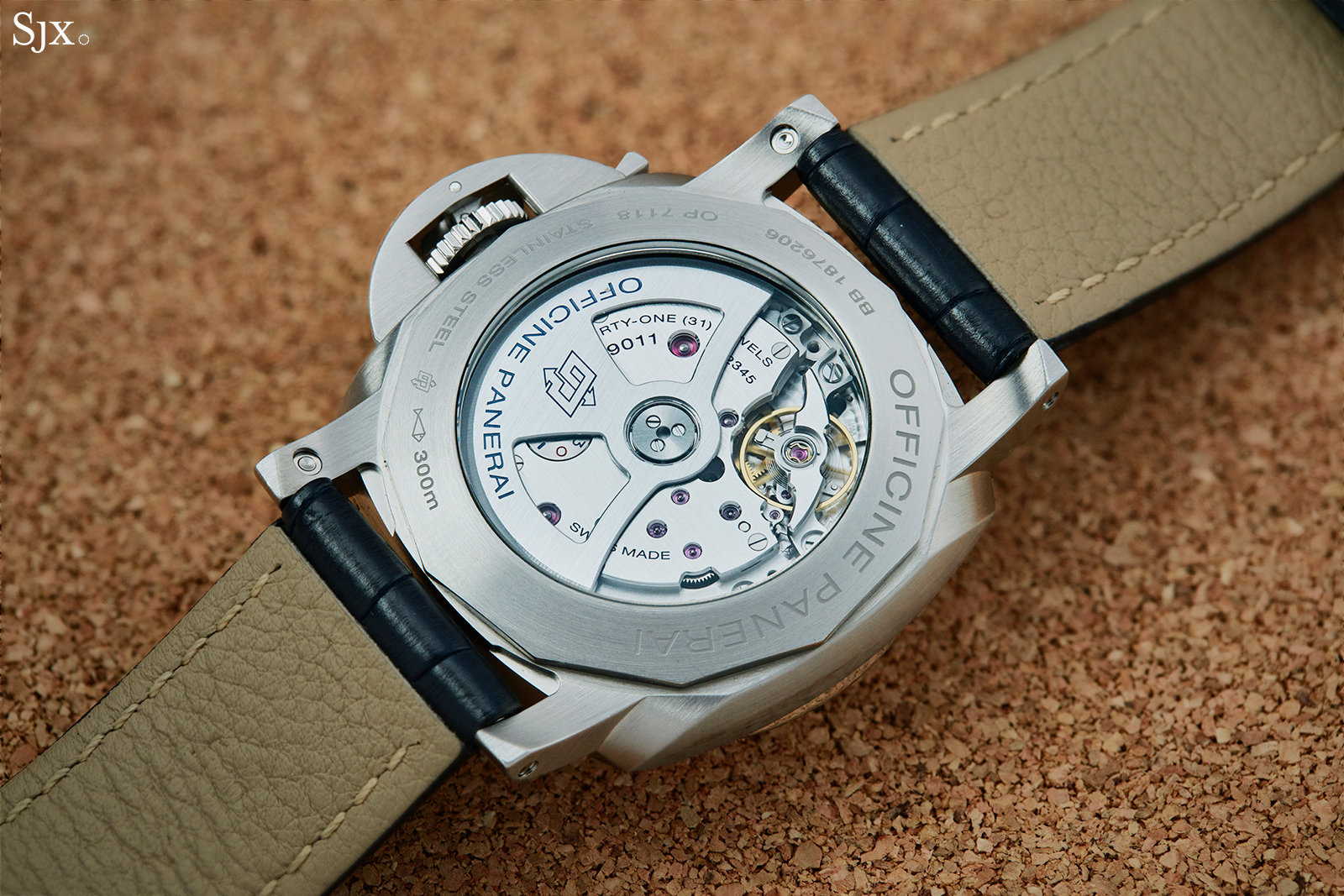 The P.9011 calibre also has a zero-reset, hacking seconds. When the crown is disengaged, the small seconds hand at nine o’clock stops like a hacking seconds, but also resets to zero, allowing for a more accurate setting of the time.

The movement is finished in the usual Panerai manner, which is to say plain. The rotor is straight-grained, as are the bridges. All the engraving text is blue lacquer, providing a hint of colour in an otherwise monochromatic movement. 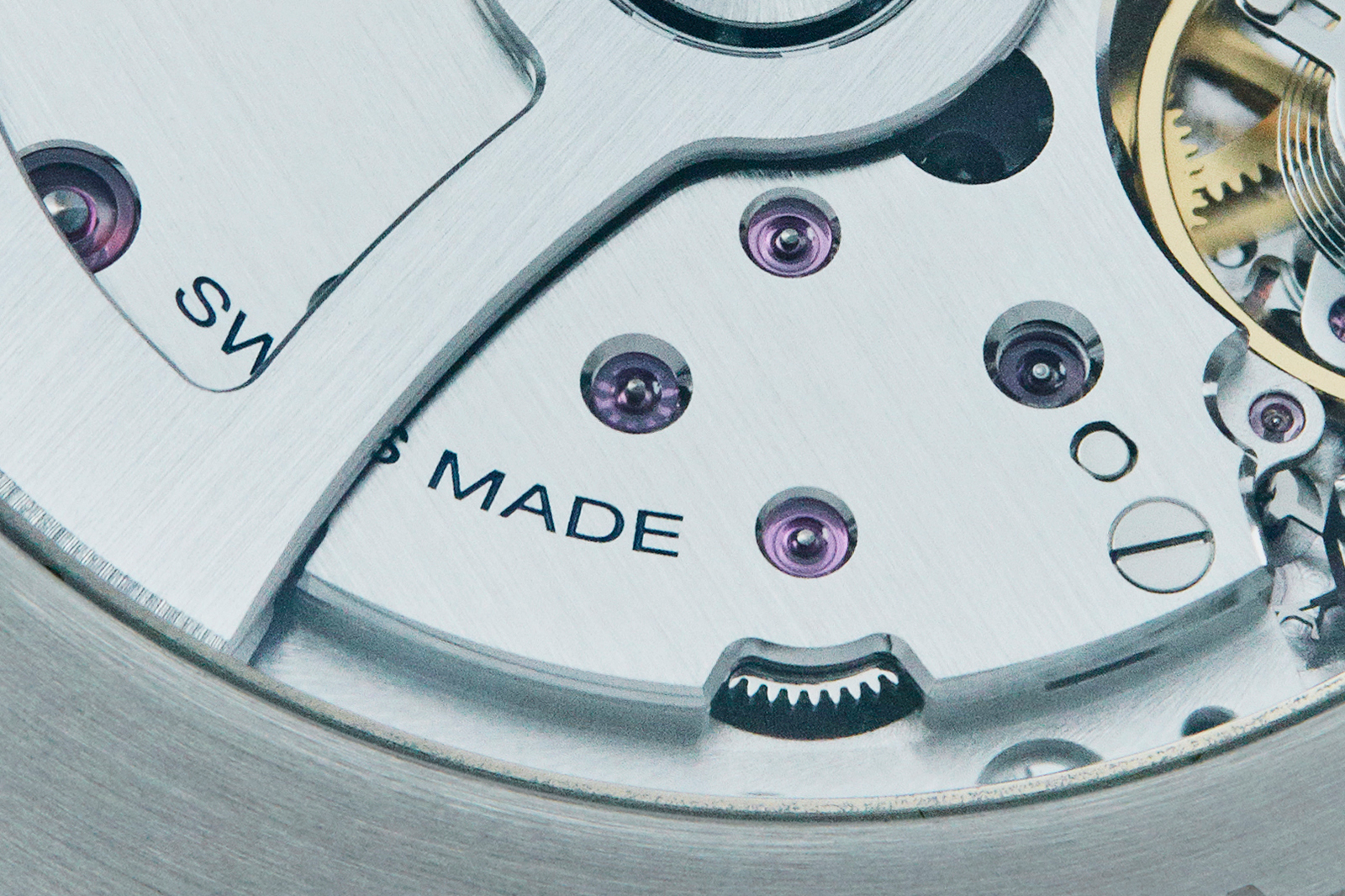 All of the decorative elements, like the bevelled edges of the bridges, are executed by machine, and reveal machining marks up close. But the overall style of the movement is fitting, echoing the utilitarian purpose that the brand was built on.

Like several other Panerai models, PAM01033 also features a power reserve indicator on the back, taking the form of a rotating disc on barrel bridge. It’s a smart place to put a display that is not required often, while at the same time being simpler to execute since it is linked directly to the barrel underneath. 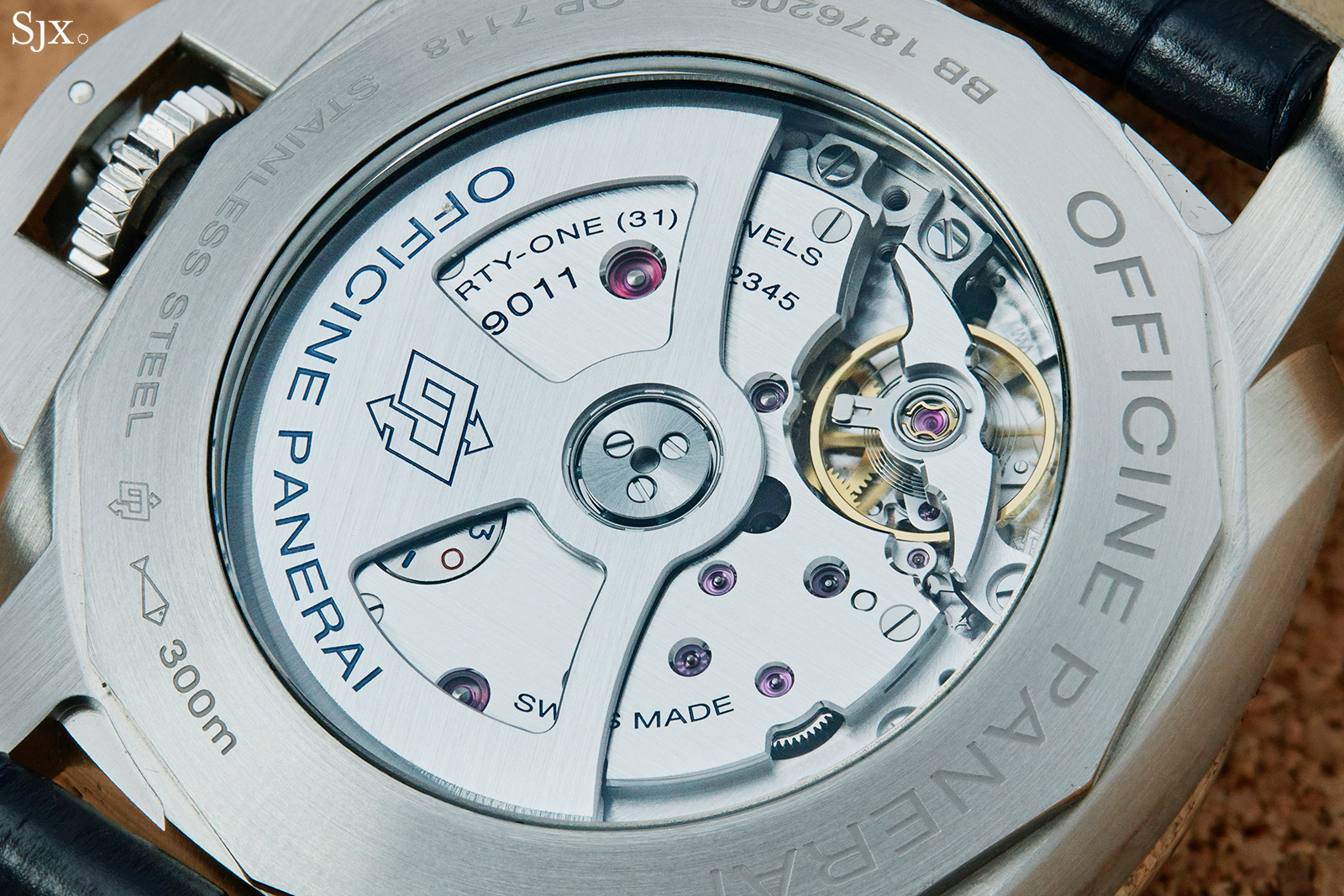 The Luminor GMT PAM01033 has all the attributes of the typical Panerai – substantial wrist presence because of its size, and distinctive features like the crown lock and dial design.

The blue dial, however, lends a little dressiness to the watch, making it appealing for the enthusiast who wants a watch that can double up as both a sports watch and a sporty watch for the office. 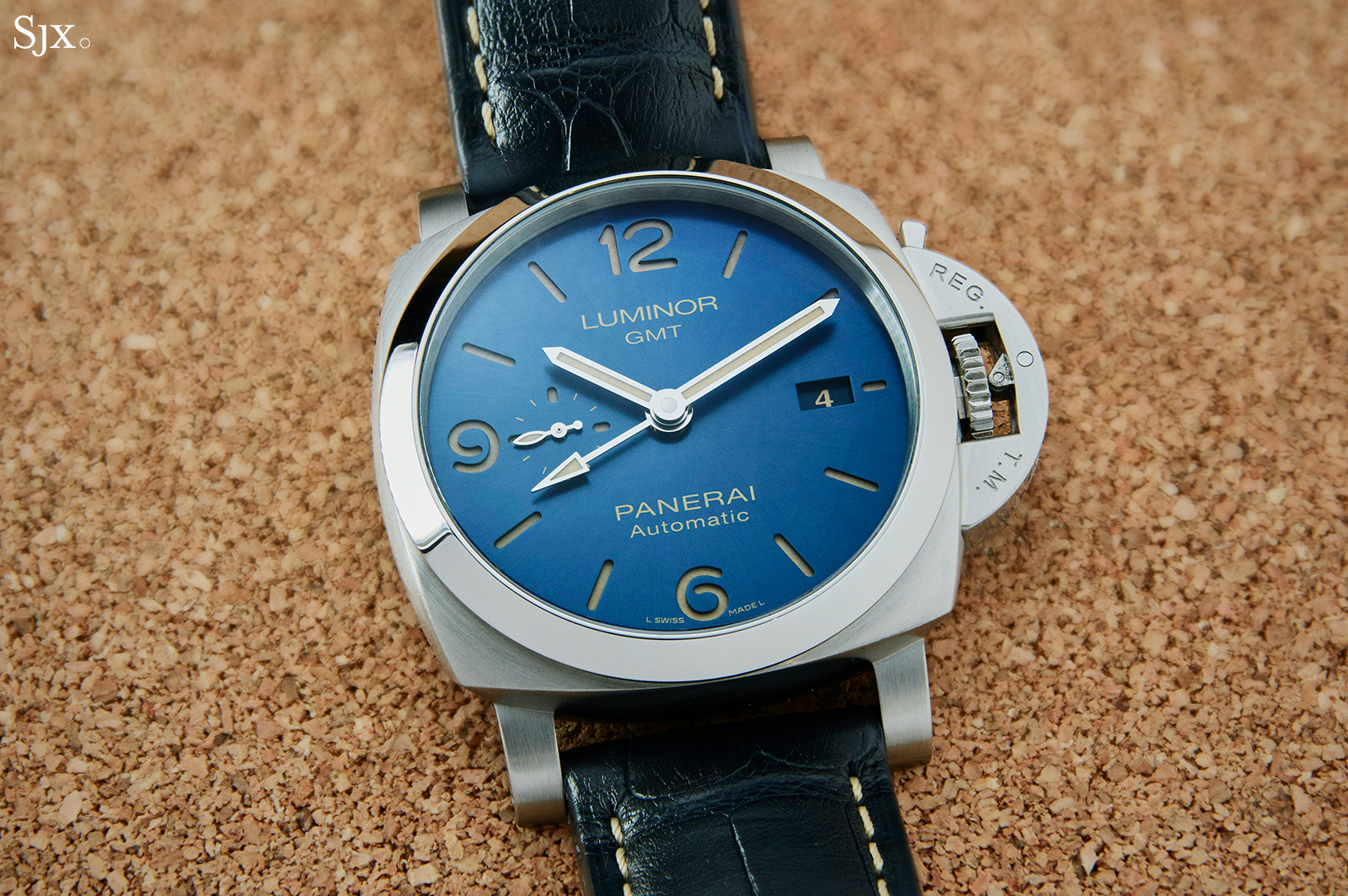 Update July 31, 2019: Included a line on the power reserve indicator on the back.