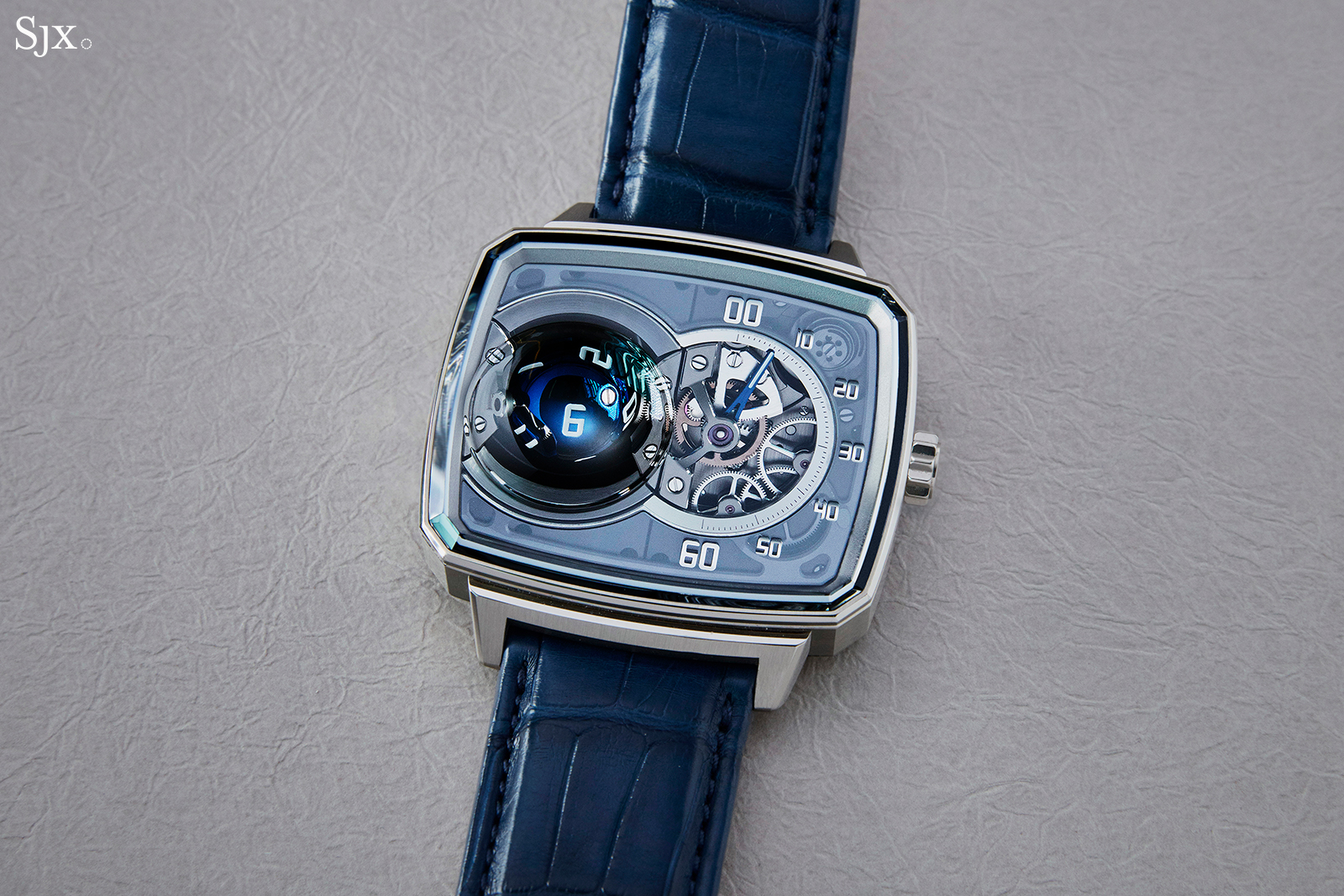 After a couple of quiet years, Hautlence unveiled its most striking complication earlier this year: a spherical jumping hour with retrograde minutes.

It’s a return to form for a brand that first took flight during the explosion of avant-garde watchmaking in the mid-noughties’, alongside peers like MB&F and Urwerk. Then still led by its founders, who named the company after an anagram of its hometown Neuchâtel, the brand capitalised on the growing desire for exciting, alternative watchmaking.

Its first calibre, the HL04, was presented in 2004 and combined a disc-based jumping hours and retrograde minutes inside a cushion-shaped case; the television screen-case has now become the brand’s signature form.

The HL Sphere is descended from the HL04, radically transforming the jumping hours into a three-dimensional, ball-shaped display. 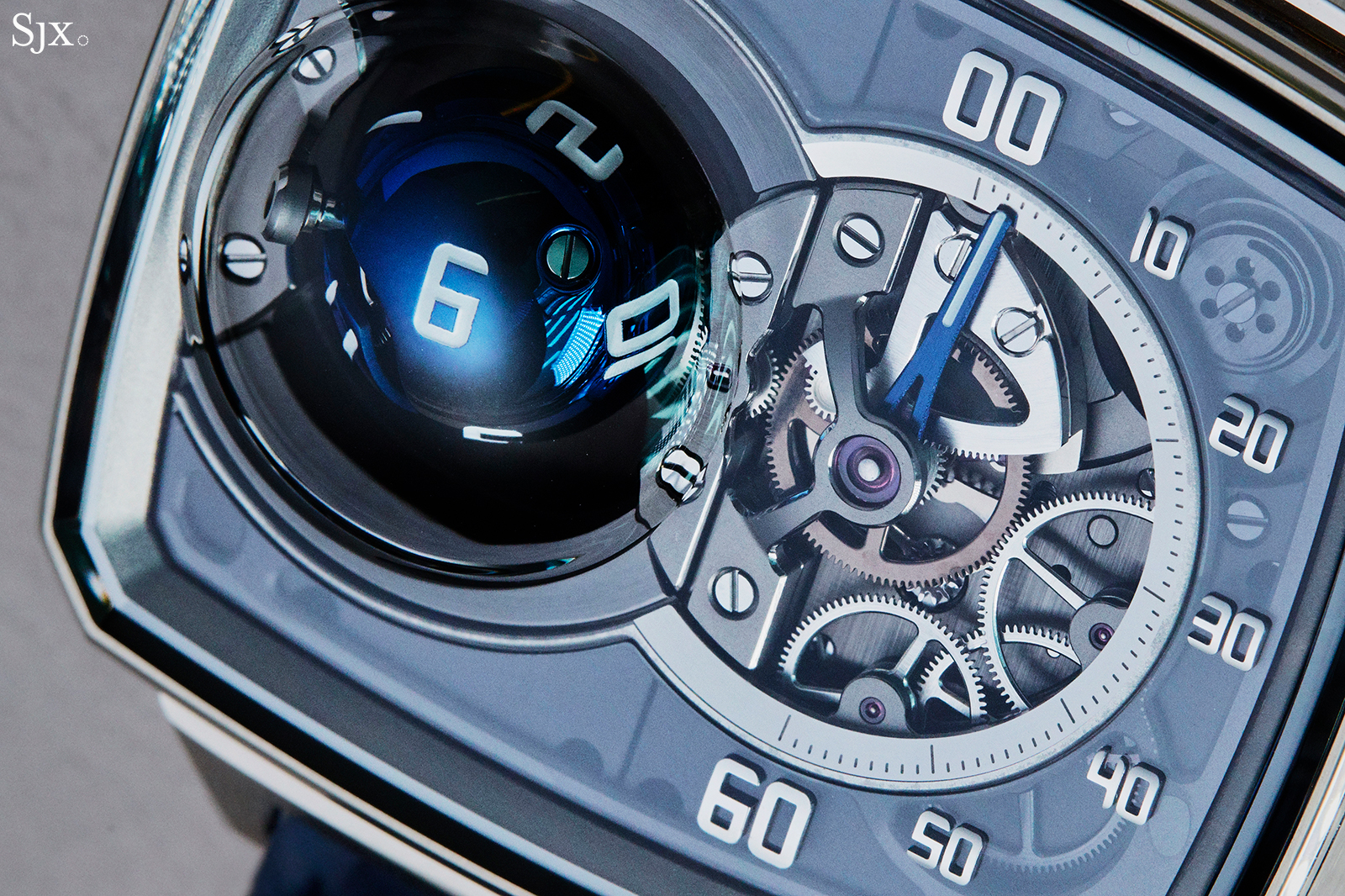 Hautlence first experimented with the spherical display when it rolled out the battery-powered HL Kinetic clock at Baselworld last year. The table clock was made up of two transparent columns each housing a sphere – one for the hours and the other for the minutes.

As it is with the watch, each sphere of the clock is a jumping indicator, performing a rapid rotation – on a non-linear track for maximum visual impact – once an hour for the hour sphere, and once every five minutes for the minutes. From desk to wrist

The spherical jumping hours was miniaturised for the HL Sphere wristwatch, and combined with a 180° retrograde minute display, harking back to the minutes indicator on the HL04.

Unlike other jumping hour displays that are one-dimensional and linear, the jumping hour sphere is a sight to behold. With each jump, the sphere rotates on itself along three axes to arrive at the next hour.

The rapid and non-linear rotation creates impression that it is a random jump. In principle it evokes the whimsical randomness of the Franck Muller Crazy Hours, a fashionable watch of the 2000s, but here Hautlence has executed it with several more degrees of mechanical complexity. Despite its seemingly random motion, the sphere moves in a fixed sequence dictated by four conical gears within that meshed with two crossed spindles each inclined at 21 degrees. Each hour is laser-engraved into the titanium sphere, then filled in with white lacquer. The conical gears that make up the spherical hours

The sphere itself is made up of two blue PVD-treated titanium halves, with the hour numerals engraved on the surface and then filled with white lacquer for legibility. 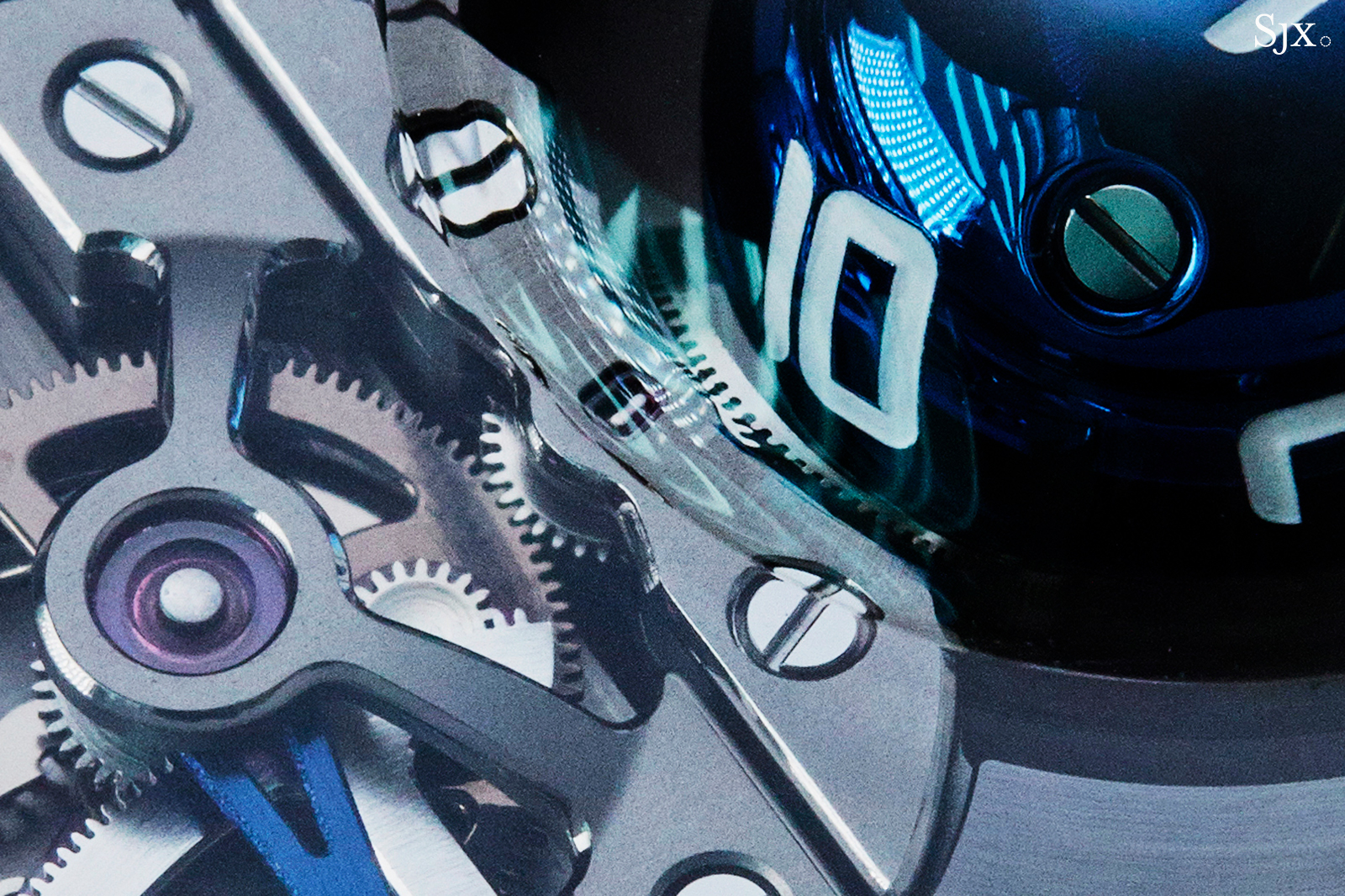 The sphere is mounted on a single pivot, creating the impression that it is floating within the movement. It is connected to the movement on the right side of the case, which contains most of the HTL 501-1 movement, the eighth movement developed by Hautlence since its founding. With the dial made of tinted sapphire crystal and open around the retrograde minutes, most of the mechanics of the display are visible. The rack and spring for the jumping hours can be seen at 12 and one o’clock. And just below that is the snail cam for the retrograde minutes – the cam sends the minute hand back to zero – but it is mostly hidden.

The hand-wound HTL 501-1 has a clean look typical of many contemporary movements. The bridges are ruthenium plated, giving them a medium grey finish, and vertically brushed. They contrast against the frosted surface of the base plate, which is visible on the periphery  of the bridges. And the bridges have attractive polished, bevelled edges, albeit ones finished by machines. Because the movement is actually compact, occupying only half the case, the balance wheel sits in a corner at the upper left-hand corner. A small detail on the balance bridge is revealing – the curved regulator index was developed by independent watchmaker Andreas Strehler for H. Moser & Cie., the sister company of Hautlence. And through an aperture on the balance bridge the mainspring is visible. It occupies almost a quarter of the real estate within the case, explaining the surprisingly long 72 hours of power reserve, especially given the energy required for the once-an-hour-jumps of both the hour and minute displays. The signature TV-shaped case – an old-fashioned cathode-ray tube screen and definitely not a flatscreen –  is multi-faceted, with contrasting polished bevels and satin-brushed sides. And the sapphire crystal has bevelled edges and corners, framing the dial nicely. Like most of Hautlence’s television-cased watches, the HL Sphere has generous wrist presence at 39mm by 46mm, standing 12mm high. The height of the watch is further amplified by the sapphire dome that accommodates the hour sphere.

Though the HL Sphere has exactly the same basic complications as the HL04 from 15 years ago, it is dramatically different in the metal. The innovative kinetic display is a lot of fun to watch, and notably novel, which is a feat in itself given the proliferation of avant-garde time indicators.

The only downside is the price, which at about US$100,000 is a steep ask, putting it in the same league as more established independent watchmakers like MB&F and Urwerk.

Introducing the Hautlence HL Sphere with Hours on a Rotating Globe