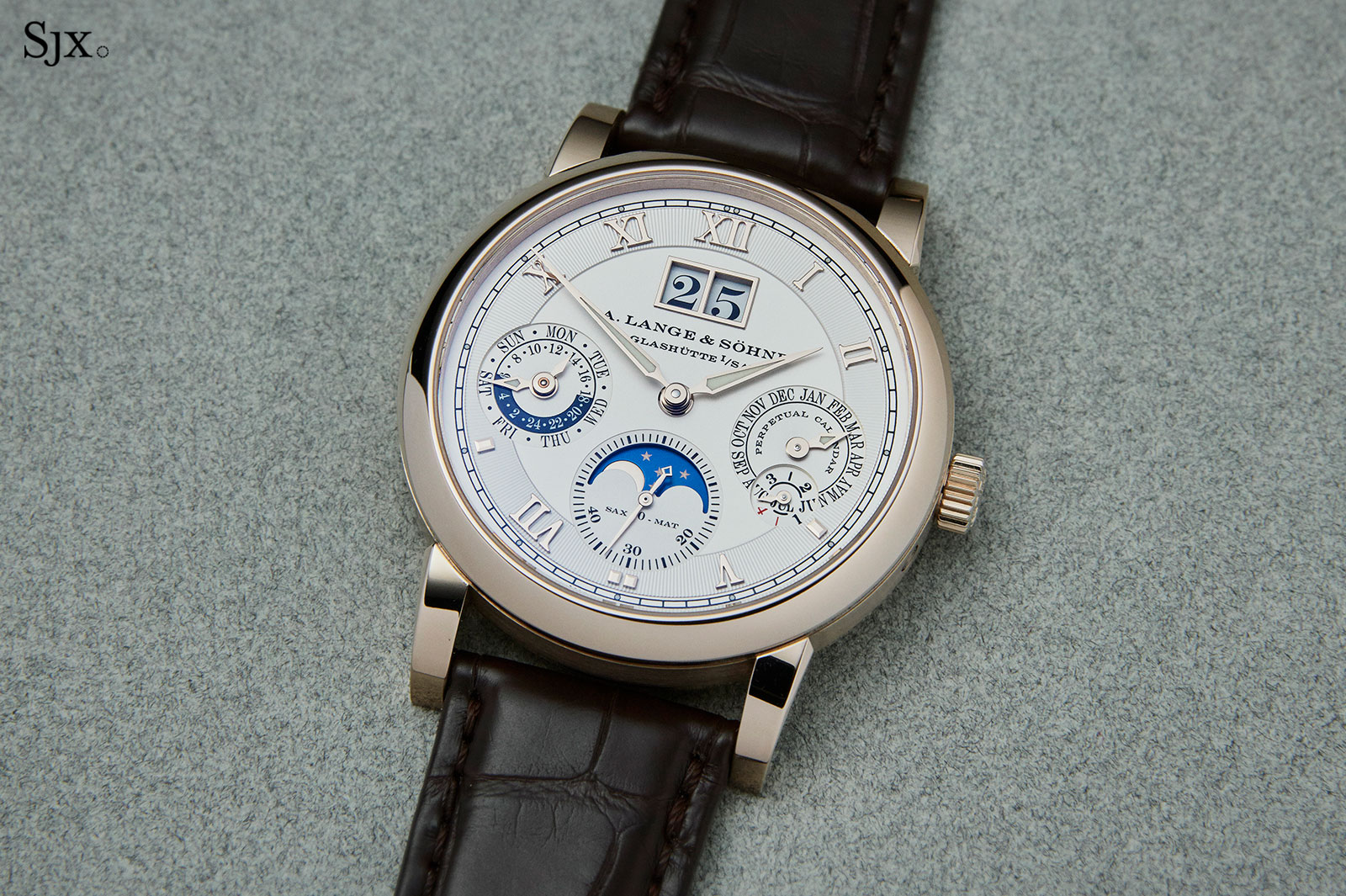 Unveiled at SIHH 2019, the Langematik Perpetual Honey Gold is the latest A. Lange & Söhne wristwatch to have a honey gold case. At the same time, it is the only Langematik perpetual calendar left in the catalogue – all other versions have been discontinued – making it perhaps the swan song of the model.

The honey gold perpetual looks a little fancier than the ordinary version. First, there is the honey gold case, which is intriguing up close because it is neither yellow nor rose gold. Instead it is an unusual but pleasing in-between shade. And honey gold also has the practical advantage of being harder than ordinary gold, making it more scratch resistant.

And then there’s the chapter ring that’s stamped with a fine radial pattern. The guilloche works well for the dial, giving it a little bit more life as compared to the standard dial. 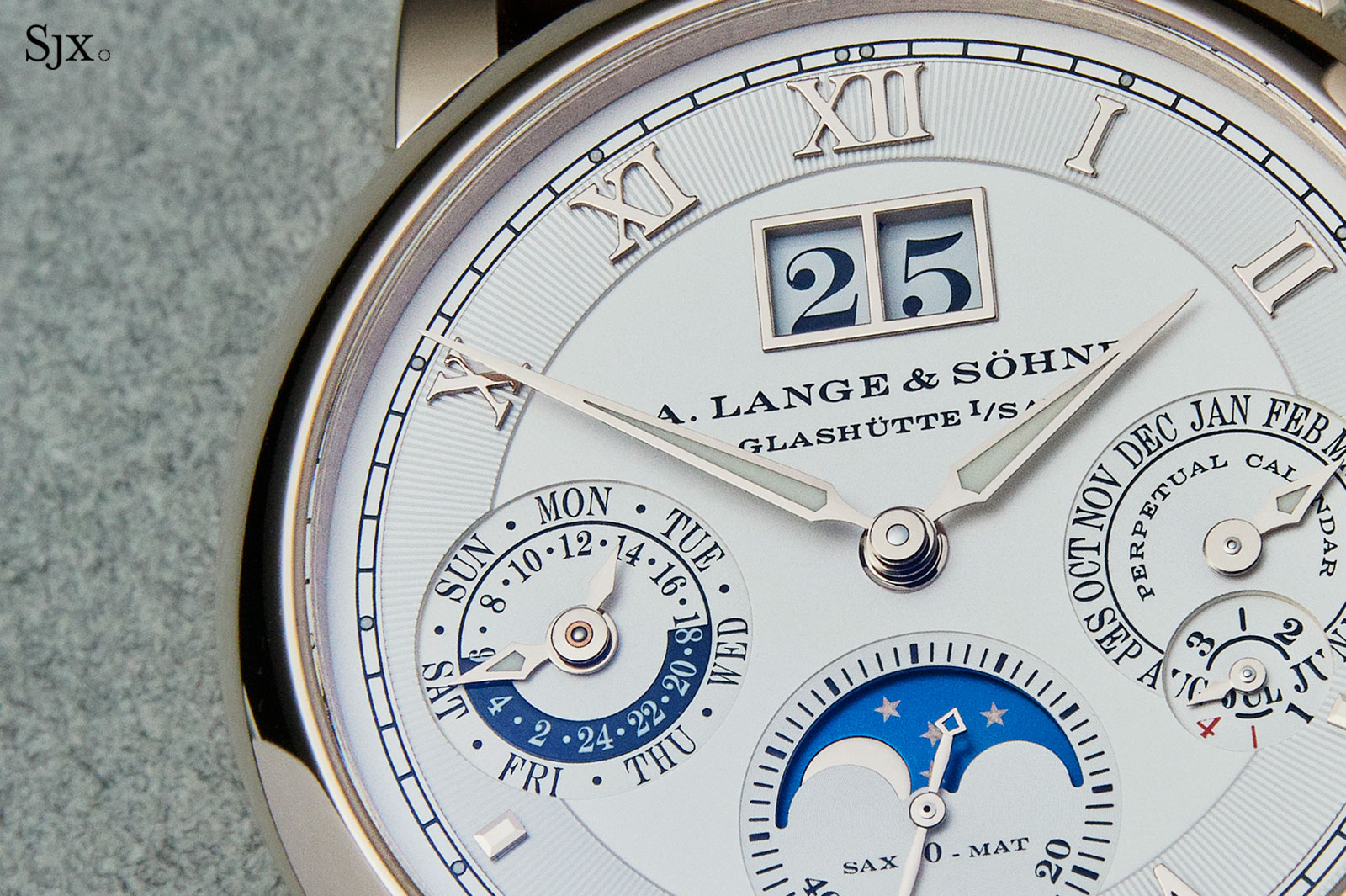 Everything on the dial is well executed when examined up close. Crucially, all of the gold elements of the dial – the Roman numerals, hands, date window frame – are also honey gold, making them an exact visual match with the colour of the case.

The rest of the watch is pretty much identical to the stock model.

From a practical perspective the Langematik Perpetual offers an exceptionally legible date, though the rest of the calendar indications are just as tiny as they are on comparable perpetual calendars.

It is also set in a similar to other perpetual calendars, with recessed pushers on the case band for the calendar displays. But that wasn’t always the case; the first generation Langematik Perpetual had a pushbutton at 1o o’clock to advance the date, just like on Lange watches with a conventional date display. But Lange got rid of the button, because it apparently was too easily triggered, causing angst with accidental advancing of the date.

On the wrist the watch is compact but solid, creating a tactile feel that is similar to other Lange watches. It measures 38.5mm wide and 10.2mm high, giving it relatively elegant proportions, although no one will ever mistake it for an extra-thin calendar watch. 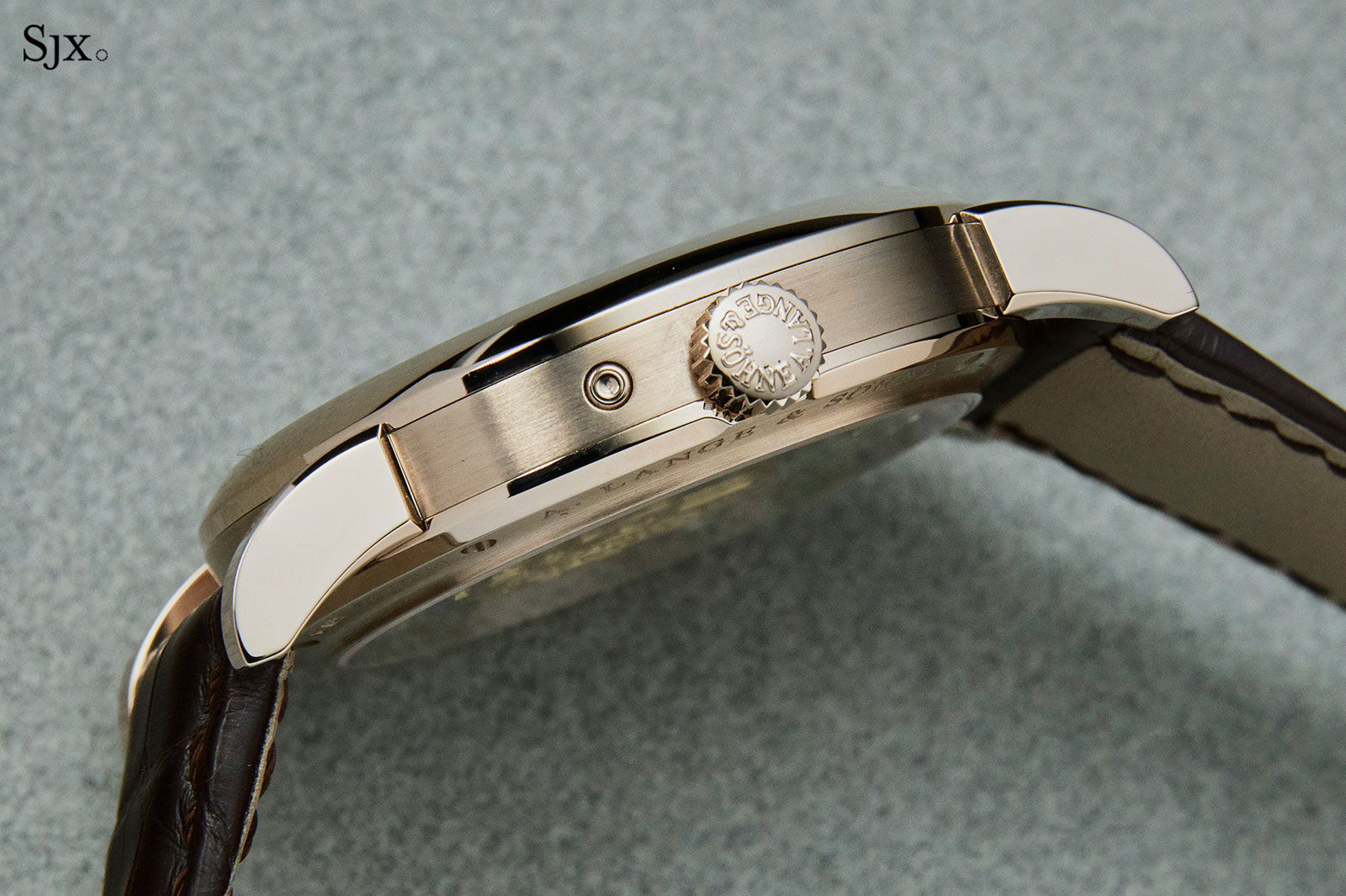 The display back reveals the L922.1 movement, one of the oldest movements in the Lange catalogue. Originally known as a the Sax-O-Mat calibre, it was the first automatic movement developed by the brand.

Its most unusual feature is the hacking, zero reset seconds – pulling the crown to set the time halts the seconds hand and sends it back to 12, hence the “O” in the name.

Here it is combined with Lange’s own perpetual calendar model, although it is indistinguishable from the back from a basic automatic. 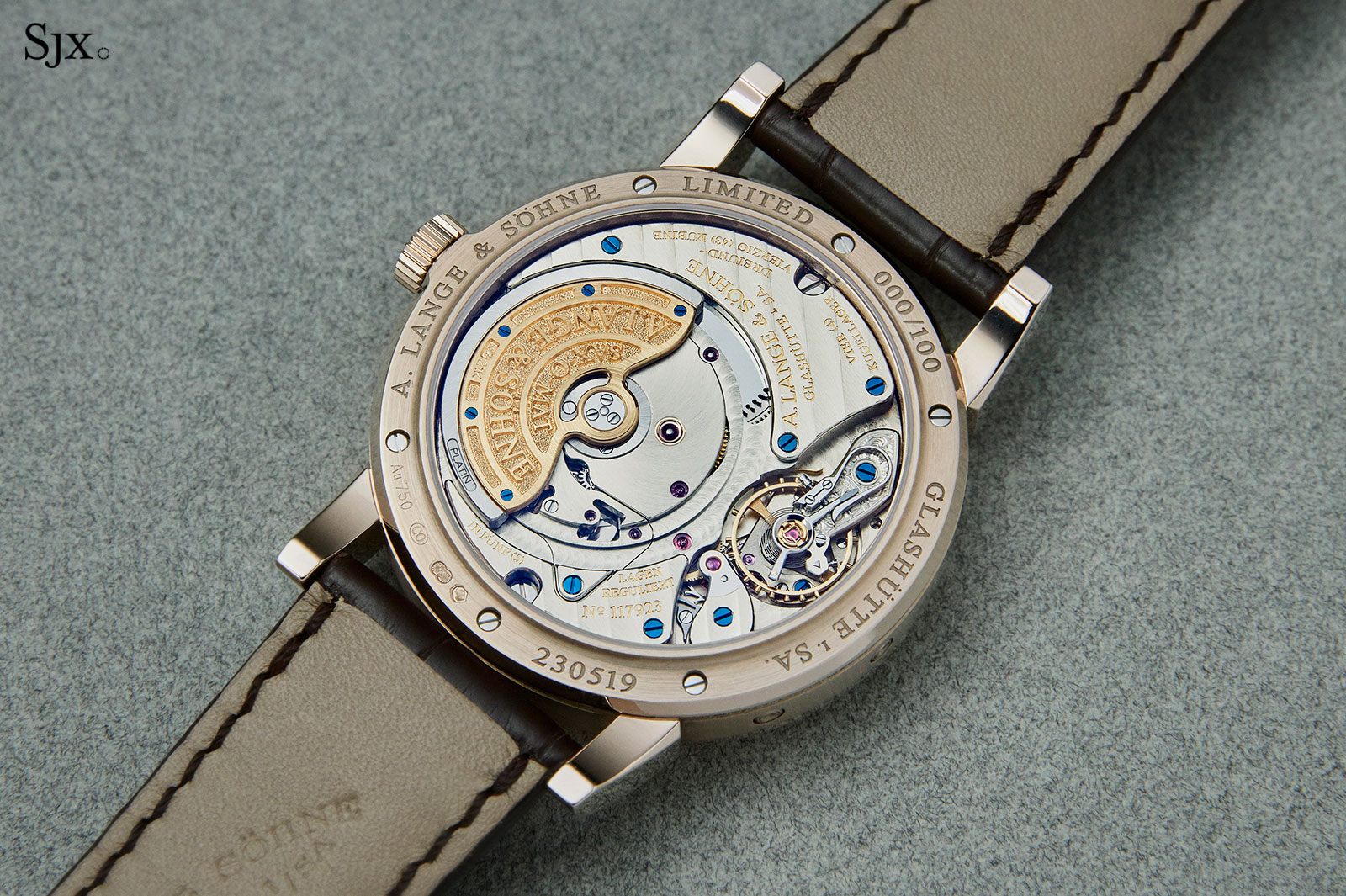 The movement is unusual in having a micro-rotor that is larger the usual; while most micro-rotor have a diameter that’s about the radius of the movement, the rotor here covers about two-thirds of the entire movement diameter.

Though the movement is decorated to typical Lange standards, making it very attractive to behold, the rotor is notably elaborate.

The central portion is solid 21 carat yellow gold, cast with relief lettering and then finished with circular graining on its top surface. Then a platinum peripheral weight is screwed to the gold section, secured with four blued steel screws. Few rotors are as fancy as this one. 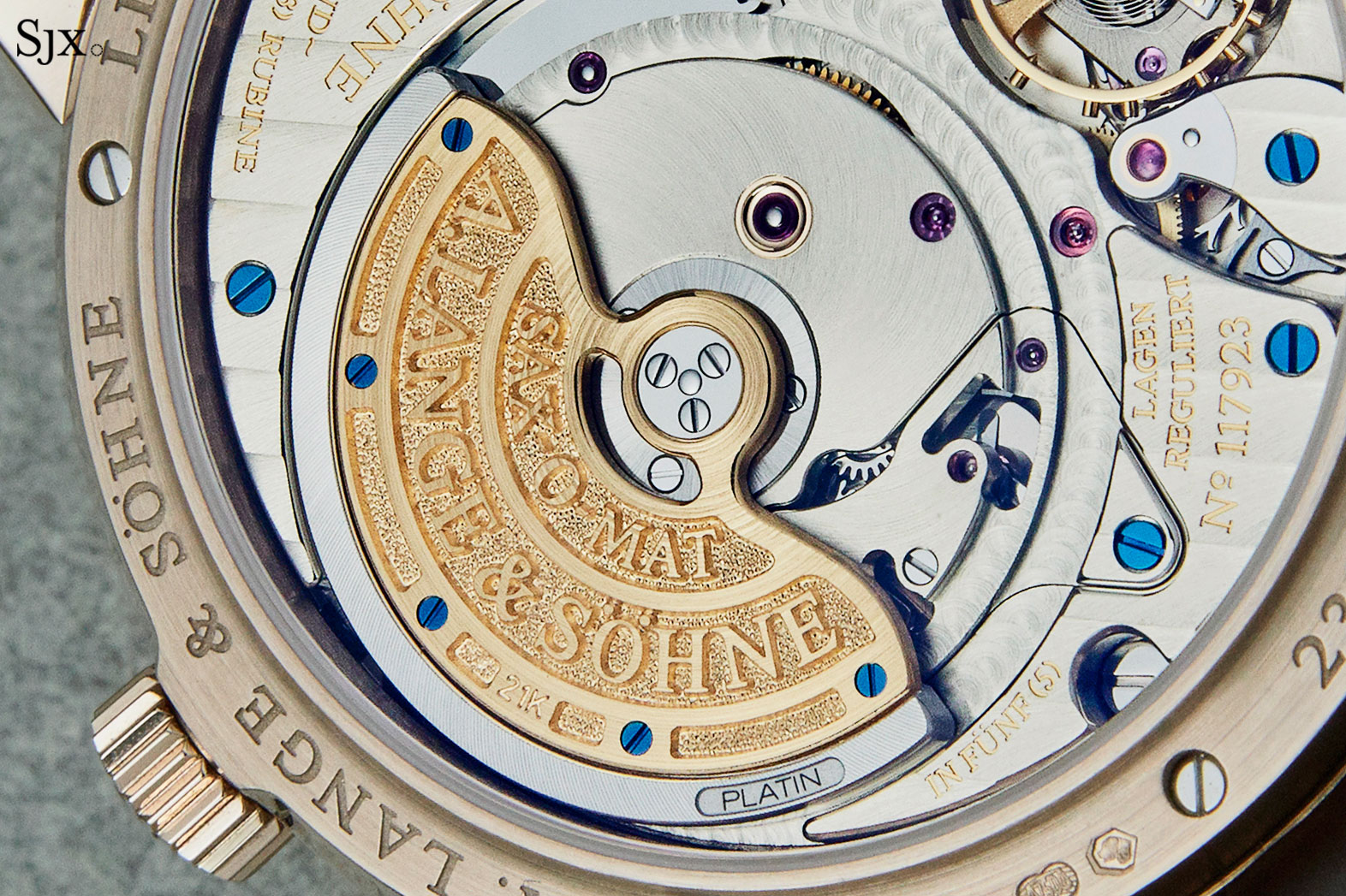 High and lows of honey gold

Since the alloy was introduced with the 165th Anniversary ‘Homage to F.A. Lange’ set in 2010, honey gold has been used for the cases of nine different models. That does sound like a lot, and  slightly diminishes the appeal of the unusual metal, but the production numbers are actually fairly small.

Honey gold is rare enough to make it appealing on its own, especially when combined with a might-be-discontinued watch like the Langematik Perpetual. 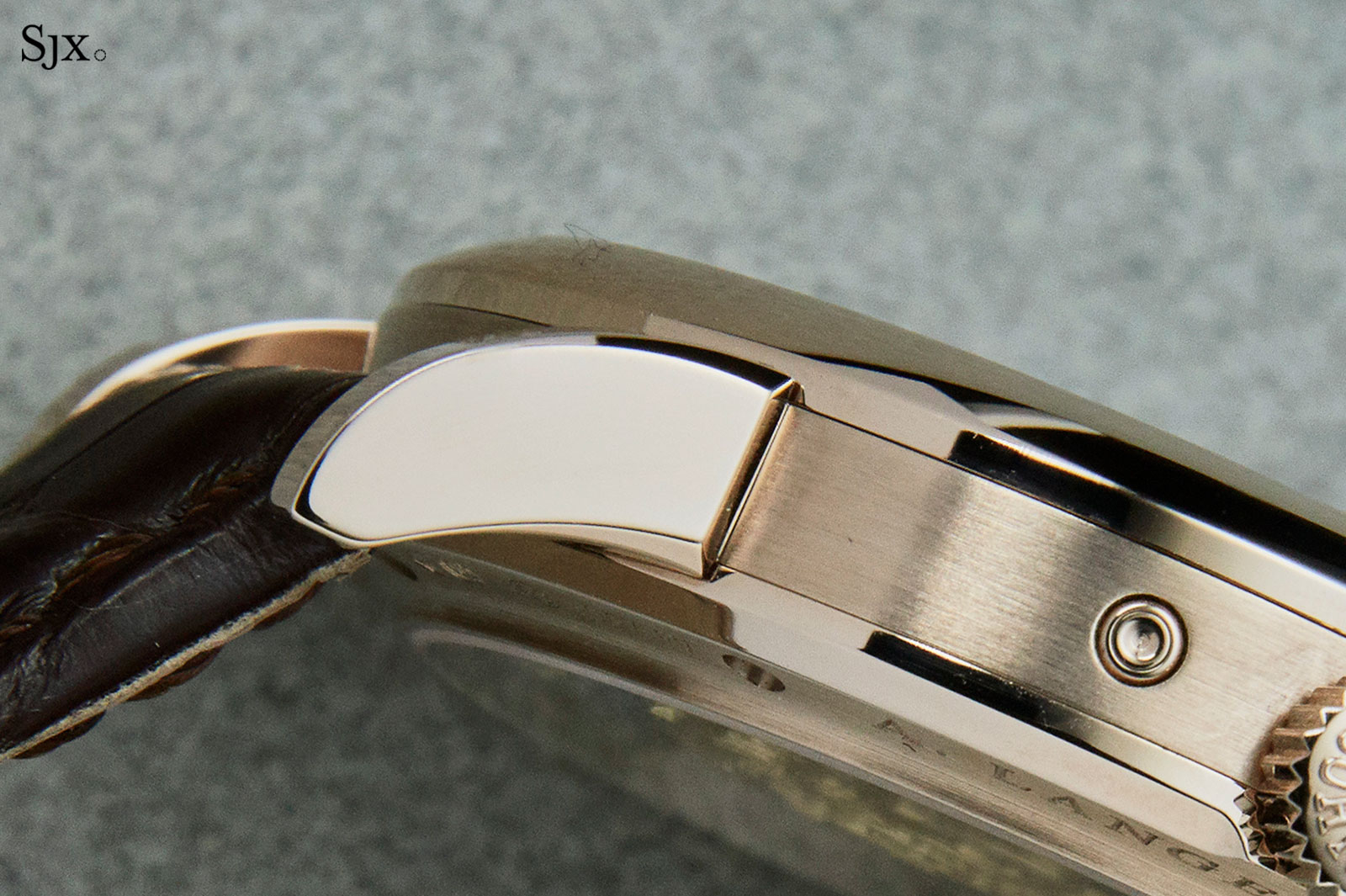