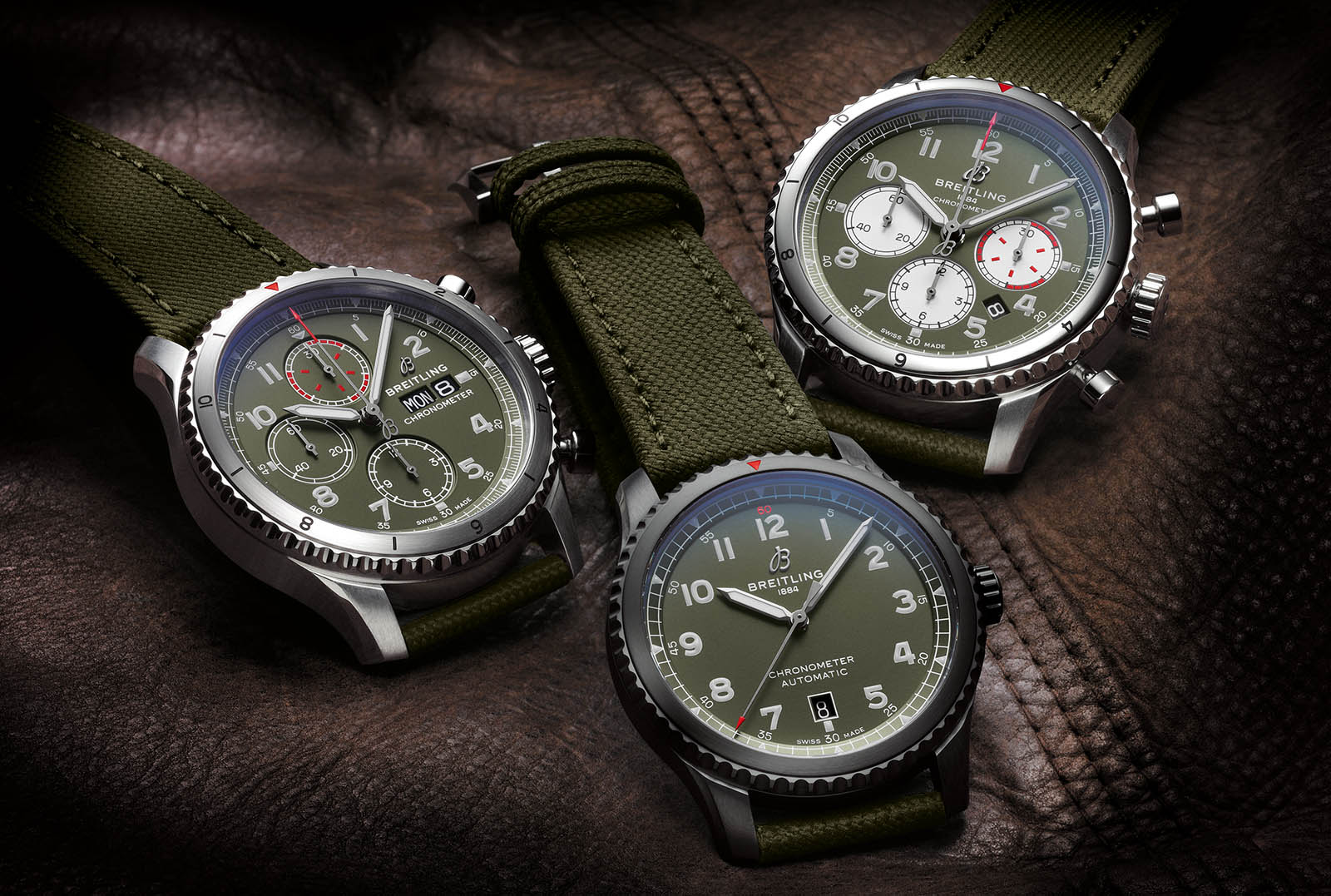 Following the well received Navitimer 1 Airline Editions that are a nod to the golden age of commercial aviation, Breitling is turning to the military history for its next capsule collection: the Aviator 8 Curtiss P-40 Warhawk trio inspired by the second world war American fighter aircraft.

The Curtiss P-40 Warhawk was a workhorse flown by the Allied air forces, mainly in Asia and Africa, most famously by the First American Volunteer Group of the Chinese air force, better known as the “Flying Tigers”, a unit made up of American volunteer airmen. The Hell’s Angels, the 3rd Squadron of the “Flying Tigers”, taken by pilot R.T. Smith in 1942. Photo – San Diego Air and Space Museum

The P-40 Warhawks operated by the “Flying Tigers” were painted olive green with a shark face on the nose, which is exactly the palette applied to the Breitling capsule collection.

The three Aviator 8 watches feature matte green dials with red and white accents, as well as olive canvas straps, giving them a distinct retro-military look. Each of the three share the same specs as the equivalent models in the Navitimer 8 collection.

Headlining the collection is the Aviator 8 B01 Chronograph 43 Curtiss Warhawk that’s powered by the in-house B01 movement.

Measuring 43mm in diameter, it features contrast-colour chronograph counters in a “bi-compax” layout, a signature feature of all models powered by the B01. The movement is well regarded for its solid construction, and like many modern chronograph movements it features both a column wheel and vertical clutch. The sapphire caseback is printed with an image of the shark-faced “Flying Tigers” and the historical Curtiss logo.

Next is the more affordable chronograph in the line-up, the Aviator 8 Chronograph 43 Curtiss Warhawk, which is equipped with a Valjoux 7750. It has a green dial with tone-on-tone sub-dials, the distinguishing feature of Breitling watches powered by the robust and economical 7750. It is has a stainless steel case that measures 43mm in diameter, with a solid case back likewise decorated with a P-40 and Curtiss logo.

The last watch is the entry-level Aviator 8 Automatic 41 Curtiss Warhawk, a straightforward watch with the time and date.

It measures 41mm in diameter and is the only watch in the collection with a DLC-coated stainless steel case, which suits the military green livery perfectly. Inside is the Breitling Calibre 17, which is actually an ETA 2824, again hidden under a display back.

The Aviator 8 Curtiss P-40 Warhawk watches are already at Breitling retailers and boutiques, priced as follows:

Correction March 12, 2019: The B01 model has a “bi-compax” layout, and not “tri-compax” as stated in an earlier version of the article.