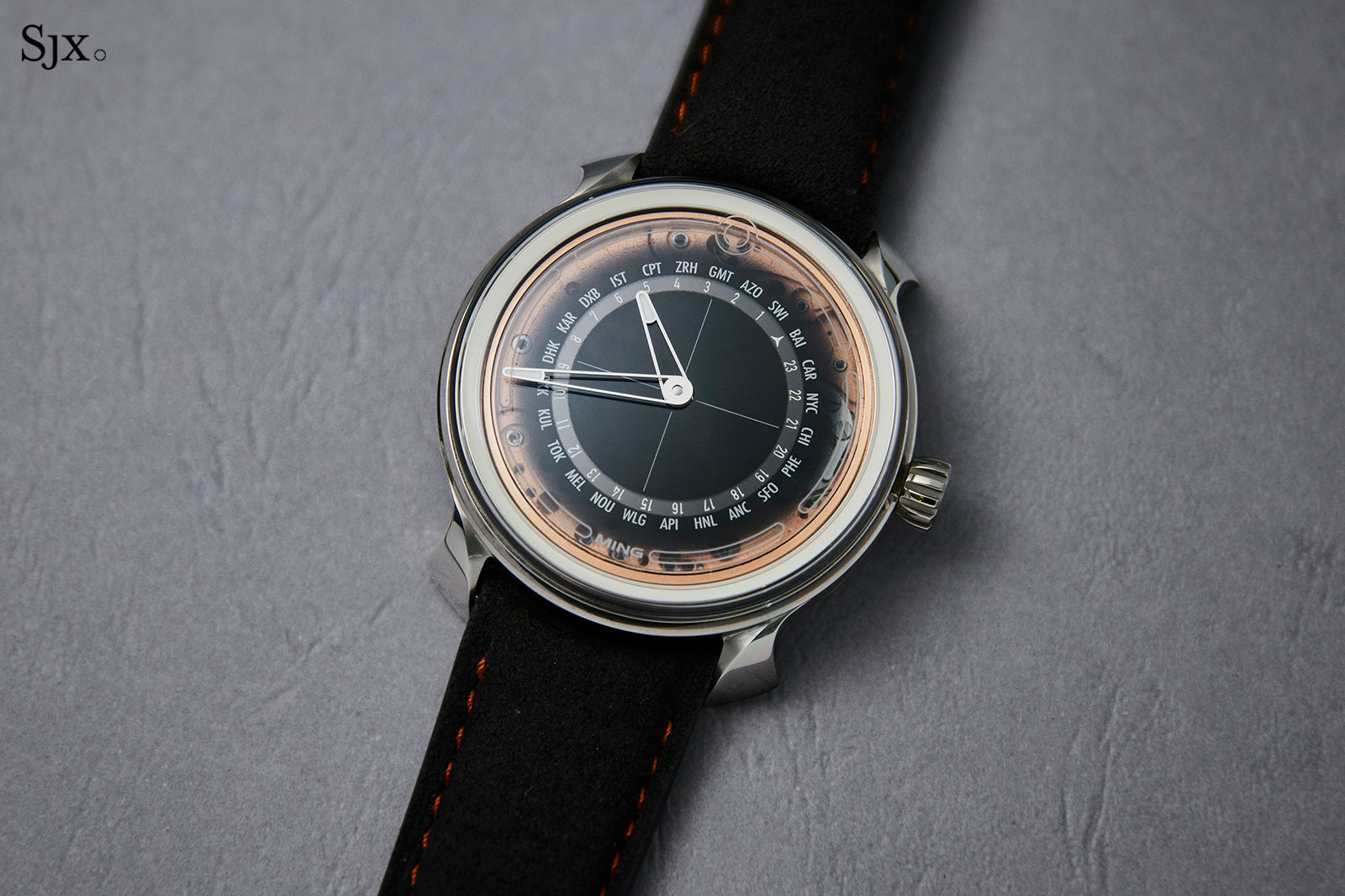 A recent start-up brand that’s based in Malaysia but made in Switzerland, Ming has quickly built itself a reputation for watches that are thoughtfully designed and unpretentious in pricing. That’s largely due to the sensibilities of its founders, a group led by the eponymous Ming Thein Onn, who’s best known for his photography.

Though the brand started with watches priced below US$2000, namely the 17 Series, it soon went upmarket with the 19 Series, which includes the new 19.02 Worldtimer. The 19.02 is a combination of a Louis Cottier-style world time and GMT, priced at about US$9900 for pre-orders. The twin model lines means the 19.02 needs to prove itself, not just intrinsically, but also in comparison to the much more affordable 17 Series watches. Surprisingly, the 19.02 acquits itself well on both counts.

The 19.02 Worldtimer wears exceptionally well. It is compact – 39mm in diameter – and lightweight thanks to the titanium case. Add to that the short lugs and the result is a watch that hugs the wrist. The watch pictured is a prototype, explaining the dust in the movement

Though the diameter is moderate, the watch looks smaller than it is. That’s in part due to the short lugs, and also because height of the case relative to its diameter. It’s 11.2mm high, which is quite thick for a watch this size, but the proportions work well in creating a solid feel despite the lightness. And the height is not apparent, because a good part of it is the highly domed sapphire crystal, which helps to accommodate the extra height of the second time zone mechanism. The 19.02 has presence on the wrist because of its styling. The dial is a dark black, ringed by the rose gold plating of the movement, and framed by the sharply angled lugs. This is Ming’s house style, and it’s a good one.

Sitting under the domed sapphire crystal is the “gradient sapphire dial” that’s found on all 19 Series watches. It is basically a clear sapphire disc that’s been painted with black lacquer in its centre, which has a graduated finishing that leaves the edges of the dial transparent. The borders of the black lacquer around the 24-hour scale are fuzzy, perhaps intentionally, though that is only visible up close. The world time scale, which uses airport codes for each time zone, is printed on the underside of the sapphire dial, and works alongside a 24-hour scale. While the cities scale is fixed, the 24-hour ring can be set backwards and forwards in one-hour steps. That allows the watch to show local time with the main hands, as well as the time in all other 24 time zones around the world.

But the functionality of the 19.02 is similar to that of other twin time zone watches that have the second time zone mechanism as an add-on module. That means when crossing time zones, local time has to be set on the main hands, followed by adjusting the 24-hour ring, a two-step process. In contrast, for movements with a GMT mechanism integrated into the base plate, it is a one-step setting of an independently adjustable hour hand.

While the design of the time zone display is logical and legible, the cities and 24-hour scale are small. I can read it well, but I can imagine those above 40 might find it less easy.

The titanium case boasts a surprising number of smart design details. The bezel is concave, emphasising the dial and domed crystal, while also making the case seem smaller.

The lugs are short and aggressively but elegantly flared outwards, with a contrasting polished and brushed finish on the inner and outer faces. Because of the large sapphire crystal on the case back, the back is secured to the case via four tabs held down by screws onto each of the lugs. While just as functional as a more conventional back with screws on its rim, the four screws here are less appealing visually, though that is a subjective preference.

As with the front, the back is also topped by a domed “box type” sapphire crystal. The view from the back is unusual, and appealing, for two reasons. One is the fact that the sapphire crystal extends almost to the edge of the case, and the other is the snug fit of the movement, which has no movement ring.

According to Ming, eliminating the movement ring improves the rigidity of the case (which in turn improving water-resistance). That is true but not major; the clean look is definitely a more substantial improvement. Though the movement – which is automatic with a 70 hour power reserve – is based on a Schwarz-Etienne calibre, it has been heavily customised for Ming. The main bridge, barrel ratchet wheel and base plate are open-worked to reveal more of the mechanics, giving the movement an airy feel despite the smallish size of the watch.

Most surprisingly is the quality of the finishing, which is excellent for a watch at this price point, putting it amongst the very best. In fact, the overall finishing is superior to what is found in mid-range luxury brands, like Jaeger-LeCoultre or IWC.

Though the bridges have a simple frosted surface, all the edges feature prominent anglage– bevelling and polishing. Found also around the cut-outs on the bridges, the mirror-polished bevels catch the light and emphasise the shapes of the bridges. The spotting on the bridges is a consequence of it being a prototype movement; the final production watches are spotless

According to Ming the polished bevels are done by hand; in all likelihood it is done with a small electric tool with a spinning, abrasive tip. The technique makes it feasible to achieve beautiful and consistent results in series production, and is also how high-end watchmakers like Patek Philippe and A. Lange & Söhne also do it.

There is only one detail in the movement that feels out of place: the Etachron regulator on the balance cock. While perfectly functional, it is usually found in basic movements. Though it is entirely appropriate for a watch in this price range, it looks incongruous against the rest of the movement, which illustrates the high quality of execution overall. The brand’s own watches are good quality but blandly styled, so Schwarz-Etienne has turned towards developing watches for other brands. Not only does Schwarz-Etienne produce the movement inside the 19.02 (and also the earlier 19.01), it is responsible for some external components, as well as the entirety of the assembly and quality control. It is obviously a productive partnership, and one that will continue into the future, according to Mr Onn.

Early bird pricing for the Ming 19.02 Worldtimer is 9900 Swiss francs with payment via wire transfer, and 10,900 francs if paid for via credit card. The prices apply only till March 31, 2019. Deliveries, however, are far out, and will start only around March 2020. Orders can be placed via Ming.