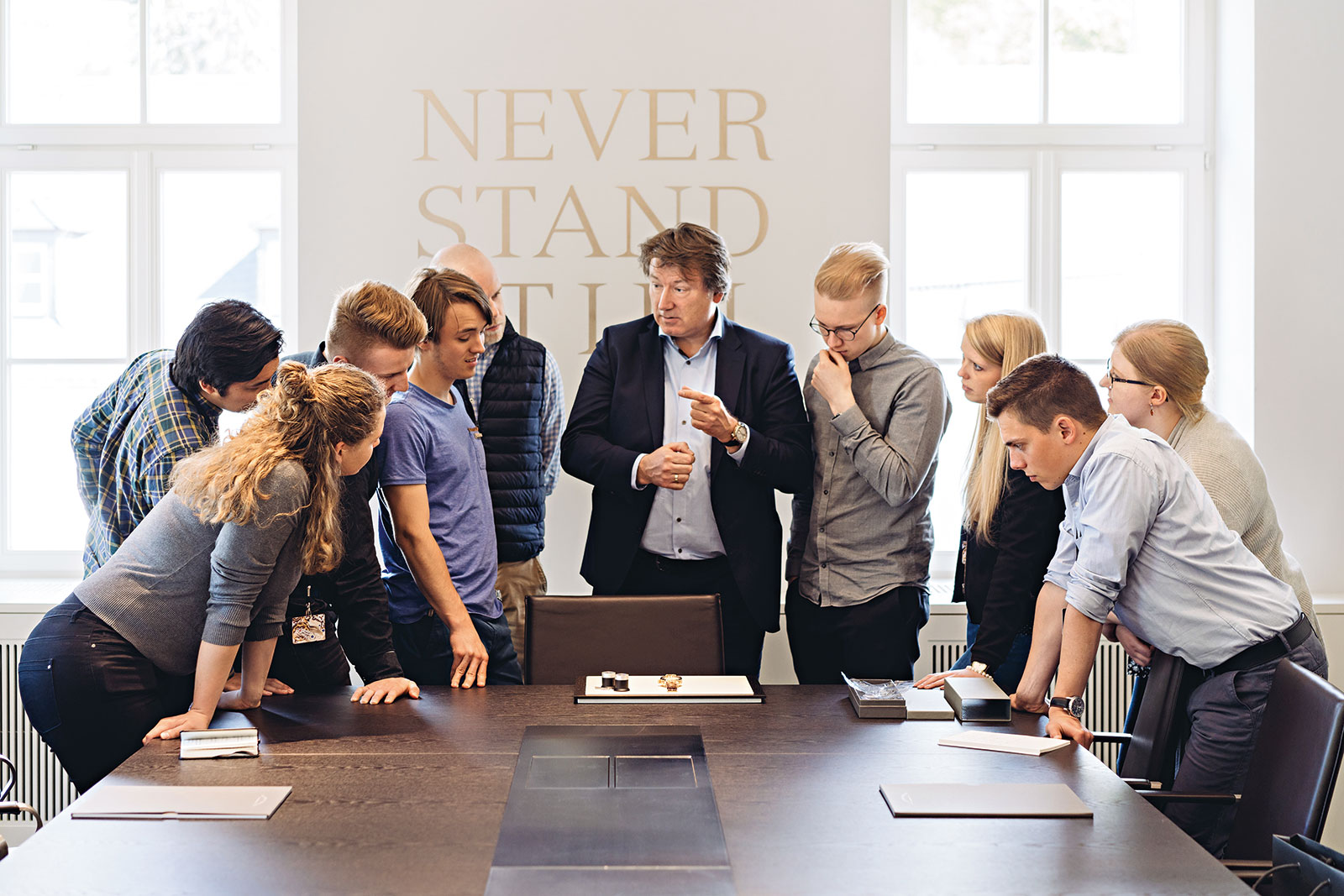 For several years now both A. Lange & Söhne and F.P. Journe have handed out prizes to the best young watchmakers during SIHH.

Over at A. Lange & Söhne, the Walter Lange Watchmaking Excellence Award was a project nearly a year long, with eight watchmakers taking part. Hailing from Finland, France, Japan, the Netherlands, Switzerland, and of course Germany, each of the watchmakers was nominated by their respective national watchmaking schools. The competitors with Anthony de Haas of Lange (centre)

The assignment was “design and build an acoustic indication” on a Unitas base movement, with watchmakers given half a year to complete the job.

This year’s winner was Otto Peltola, a 22-year old Finn studying at the watchmaking school of Espoo, Finland’s second largest city, who built a watch movement that sounds on the quarters with different tones. Named Ostinato, the movement features an unusual striking mechanism reflecting the fact that Mr Peltola hails from a family of musicians. He took home a prize of €10,000. And from the other side of the world, Yutaro Iizuka of the Hiko Mizuno College of Jewelry in Tokyo built a movement that has a peripheral ring made of native Japanese stone that is struck by the hammer.

The F.P. Journe Young Talent Competition has been staged annually with the support of the Fondation de la Haute Horlogerie (FHH), the body that organises SIHH, and from 2019, Singapore retailer The Hour Glass.

The winner this year was 27-year old Tyler John Davies, a recent graduate of the School of Jewellery at Birmingham University. He built an eight-day, weight-driven wall clock with a deadbeat escapement that sits in an American black walnut case. Commenting on the clock’s genesis, Mr Davies says, “For my major final year project, I was set to design and manufacture a mechanical clock with a visible escapement, addition of a complication at the designer’s discretion.”

“I included some of my own principles: the mechanism should be open and easily viewed… I aim to make 90% of the components from raw material with use of both traditional and modern manufacturing techniques where suited [with a] traditional construction.” Much of the clock was built by hand, and with some ingenuity. Commenting on the dial, Mr Davies says, “It was proving quite difficult to find an engraver to do any work, never mind such a large piece and when I did, the cost was too high.” “In the end, I designed the dial on a CAD and had it engraved using a gravograph… the dial feet were riveted in place and then finally the dial was waxed and silvered.”